One Hundred Years After the Occupation

A century later, the legacies of the U.S. military intervention of the Dominican Republic persist. 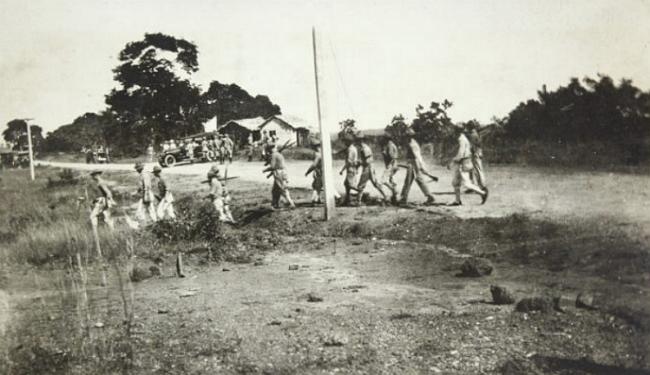 May 15, 2016 marked the 100-year anniversary of the first U.S. military occupation of the Dominican Republic. Unlike other violent historical events in global history—from the European colonization of the Americas to the Holocaust to the Vietnam War—the United States’ occupation of the Dominican Republic remains hidden from public memory and relegated to the footnotes of American history, even as Dominicans become one of the fastest growing ethnic groups in the United States.

In contrast to this silence, the legacy of the U.S. intervention has shaped the political and economic destiny of the Caribbean nation as well as nearly every aspect of Dominican culture. After the occupation, baseball, for instance, replaced cockfighting as the national pastime. Foxtrot and jazz mixed with local rhythms, to create what we today know as Merengue.  During the occupation, in the name of “civility” and “freedom” evangelical missionaries from the U.S. erected churches in many Dominican villages, while Santeria, voodoo, and palo (an Afro-religious practice originating in the Congo) were declared illegal on the island.  Even to this day, Dominican Afro-religious communities are stigmatized and often forced to congregate in secret.

The eight-year U.S. military occupation followed two decades of unequal tug-of-war between the U.S. Empire and the divided island of Hispaniola. In 1904, the U.S. government seized Dominican customs houses. In 1905, as the economist Rémy Herrera has noted, the United States issued sanctions and ultimatums, threatening both Haiti and the Dominican Republic with intervention if “upheavals and banditry” were not “brought under control.” Finally, on July 28, 1915, U.S. Marines landed in Haiti, occupying the second-oldest nation in the Americas for nineteen years. A few months later, in May 1916, the occupation spread east, with the excuse of halting Caudillismo and insuring “proper governance” and civility in the Dominican State. Despite local armed and intellectual resistance, the U.S. military was successful in controlling Hispaniola’s population through censorship, intimidation, fear, and military force, thus breaching the two nations’ sovereignty.

Like other U.S. occupations in the twentieth and twenty-first centuries, the Dominican intervention in 1916 reflected the United States’ view of itself as an indispensable nation that it had a duty to “protect” the world. Following President Theodore Roosevelt’s expansionist corollary to the Monroe Doctrine, President Woodrow Wilson (1913–21) invigorated the U.S. military to become a guiding force, believing the U.S. should help other nations become “civilized.“ This paternalistic rhetoric of U.S. domination was the primary cultural mechanism that brought U.S. Marines to the DR. The language used by President Woodrow Wilson to describe the occupation portrayed the Marines as “invaluable vessels of the mighty United States Government,” a privilege that came with a duty to eliminate opposition and dominate the local—and often resistant—population. To this militarism was added the racialized logics that grew out of the Jim Crow U.S. South; the Marines who served during the occupation of the DR frequently expanded white supremacist ideologies in the hemisphere through imperial policy and force.

A brief glance at the Dominican occupation of 1916-24 also tells us a lot about the role of the United States in the creation of unequal economic and political systems that benefit rich corporations while condemning the majority of the DR’s population to poverty and disenfranchisement. During its eight-year occupation, the U.S. government handed Dominican finances over to the National City Bank of New York, a financial institution that would later be controlled by the Rockefeller Group. This move facilitated foreign corporate ownership of Dominican land for sugar production. The occupation also led to the creation of the Guardia Nacional Dominicana (Dominican National Guard, or GND), which served as a vehicle for the ruthless three-decade-long dictatorship of Rafael Leonidas Trujillo (1930–61). During the occupation, Trujillo served as the U.S.’s right-hand man and appointed general. GND officers were trained by the U.S. Marines and served under their command. During the last six years of the intervention, the GND was also used to repress and torture people who were perceived as enemies of the nation.  Eventually, after the occupation ended, the GND became a tool of social control for the various Dominican dictatorships of the twentieth century, in particular those of Trujillo and Joaquin Balaguer. To this date, the GND continues to be the main vehicle for exercising repression and censorship of the Dominican people, and is often deployed during peaceful demonstrations to intimidate protesters.

The U.S. Marines trained Trujillo to lead the GND in 1918 and elevated him to Commander-in-Chief of the National Army by 1927. In 1930, with support from his military, Trujillo supported a coup against then President Horacio Vasquez. He would rule the Dominican Republic for the next thirty-one years. Most twentieth- century Latin American historians agree that Trujillo was one of the most ruthless dictators in modern Latin American history. His most atrocious crime was the genocide of an estimated 20,000 ethnic Haitians and black rayanos (ethnically-mixed people from the Haiti-DR borderlands) in 1937. The U.S. occupation left a legacy of anti-blackness that has condemned Haitian-descended Dominicans to poverty and exclusion in the Dominican Republic.

U.S. policy also drove Haitians to migrate to the Dominican Republic. In 1918, U.S. Secretary of State William Jennings Bryan spearheaded a plan to write a new constitution for Haiti. This new constitution removed an 1805 law that barred foreigners from owning Haitian land. The assistant secretary of the navy at the time, a young Franklin D. Roosevelt, took credit for writing Haiti’s Constitution, which gave preference to American corporations for buying and owning Haiti’s land. The loss of communal land contributed to the strengthening of a new plantation system, deepening poverty among the Haitian peasantry. Disenfranchised peasants would eventually look to the Dominican Republic for work in the U.S.-owned sugar industry. (Many Haitians also came to the DR through the U.S.-established Hispaniola temporary labor program, which brought Haitians into the country for cane cutting and West Indian specialized workers for management and office administration positions.) This structure became the basis of an exploitative labor system that relied on undocumented Haitian workers and, to this day, continues to foster race-based economic inequality of ethnic Haitians in the Dominican Republic as evidenced in the 2013 denationalization of more than twenty thousand ethnic Haitians.

Today there are over one million Haitian migrants living in the Dominican Republic. Many work in the country’s sugar industry, often in slave-like conditions, as depicted in recent films like The Price of Sugar (2007) and Sugar Babies (2007). However, the relationship between Haitian immigration to the Dominican Republic and U.S. interventions in the politics, economics, and culture of both the DR and Haiti is still all-too-often overlooked.

It is not surprising that the one hundred-year anniversary of the Dominican occupation has passed largely unnoticed, even as the world continues to reckon with the U.S. role in sustaining race-based economic and social inequalities both at home and abroad. Ironically, in the Dominican Republic, the anniversary came on the eve of one of the most controversial national elections in modern Dominican modern history, in which non-traditional, independent candidates like Domingo Moreno (Alianza País) and Minou Tavarez (Alianza por la Democracia) challenged the establishment and the nation’s long history of servitude to U.S. corporate interests.  Amidst wide-supported political resistance, President Danilo Medina, of Partido de la Liberación Dominicana, unabashedly changed the DR’s constitution in order to run for a second term as president. Medina did so despite a public outcry over a corruption scandal that linked him to money laundering and despite his role in the massive diplomatic crisis that followed the passing of the 2013 denationalization law.

Yet, in the climate of Trumpism—where political figures seem to be able to get away with spreading hatred, racism, and anti-immigration rhetoric— Medina’s presidential campaign is a disturbing reminder of the permanence of the 100-year marriage between Dominican politicians and U.S.-backed corporate exploitation of the Dominican poor. As long as the Dominican establishment continues to play ball, this marriage will endure, notwithstanding the opposition of the majority of its people.

Lorgia García-Peña, PhD, is an assistant professor at Harvard University and the co-founder of Freedom University in Georgia. She specializes in Latino/Latina studies and Hispanic Caribbean literary and cultural studies with a special focus on the Dominican Republic and its Diaspora. She is the author of  The Borders of Dominicanidad: Race, Nations and Archives of Contradictions (Duke, 2016).