NACLA's editors introduce the latest print issue of the NACLA Report on the Americas - Currency of Death: Unraveling the Political Economy of the Drug Wars. 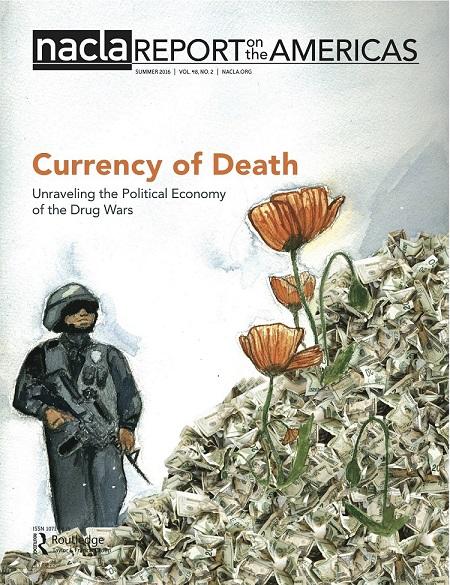 That the so-called U.S. “war on drugs” has proven an abject failure is now well established. Social movements and human rights NGOs have denounced it. Current and former presidents across the Americas have condemned it. Mountains of research and journalism have confirmed it. And yet as the war continues and expands, the ever more horrifying violence it has wrought—whether state or non-state, institutional or extra-institutional, legal or illegal—spotlights one area where the war on drugs has undeniably succeeded: perfecting an economy of death at the nexus between states, militaries, paramilitaries, and capital.

This lethal nexus is the subject of our latest Report. Our contributors untangle the webs of capital and economic interest that sustain the drug wars by asking how and why they emerged in the Americas. As Christy Thornton writes, these are especially urgent questions: “[E]ven as a general consensus has emerged that the U.S.–led war on drugs has failed by its own standards, much of the debate continues to avoid the underlying economic factors that keep not only the drug trade itself, but also the militarized war against it, going strong.”

Few texts have more powerfully unraveled the political economy of the drug wars than Dawn Paley’s 2014 tour de force, Drug War Capitalism. With unrelenting clarity Paley reveals just how extensively the war on drugs permeates Latin American politics and society —from Mexico to the Andes—resulting in ever more intrusive and exploitative forms of capitalist accumulation and dispossession. Paley’s arguments—which she elaborates in conversation with sociologist William I. Robinson, journalist John Gibler, and Maya-K'iche' scholar Gladys Tzul Tzul in the Report—are the centerpiece of this issue.

The bloody embrace of drug wars and capital has deep roots, as historian Alexander Aviña demonstrates in taking us to Cold War-era Guerrero, Mexico, where counterinsurgent actions in the 1970s set the stage for the current confluence of drugs, war, and capital. Mexican scholar Sergio Aguayo, interviewed by NACLA’s Fred Rosen, also places the contemporary drug wars in the context of decades-old organized criminal economies, emphasizing their political underpinnings. As with the early twentieth-century mafia, Aguayo contends that organized crime in the Caribbean Basin is the “bastard child of capitalism and liberal democracy.”

And while the violence of the drug wars is pervasive, borders have emerged as particularly notorious sites of conflict, as Molly Molloy, founder and editor of the indispensable e-update Frontera List, has amply documented. Here she speaks with journalist Julián Cardona about the economic foundations that led to a surge in violence in Ciudad Juárez after former Mexican president Felipé Calderón militarized his country’s battle against drug cartels in 2006. Meanwhile, in their respective pieces, John Lindsay-Poland and Todd Miller offer gut-wrenching accounts of how high profits in the drug war-industrial complex have expanded the power of private industries and the bureaucratic reach of new state agencies, through U.S. counternarcotics initiatives like Plan Colombia and Plan Mérida, and through the ever-expanding national security state at the U.S.-Mexico border. Finally, ahead of the release of the second season of Netflix’s Narcos, historian Lina Britto asks how the show’s splashy use of fact and fiction reflects not just a particular vision of drug wars past, but of their present and likely future in the profitseeking industry of entertainment.

Beyond this issue’s focus on the political economy of the drug wars, contributors in our Around the Region section offer new insights on pressing political topics in the Americas. The parliamentary coup against Brazilian President Dilma Rousseff, observes Sean Purdy, has made the renovation of the Brazilian Left more vital today than at any point in recent memory. From Venezuela, Steve Ellner probes what’s at stake in debates about political negotiation and compromise as Chavismo struggles to survive. On Puerto Rico and Haiti, Marisol LeBrón and Jake Johnston, respectively, report on how debt and electoral crises—both deeply rooted in longstanding U.S. policies toward the Caribbean—have wrought new rounds of uncertainty and unrest. And in a special Reflections section we're pleased to highlight two very different contributions to the debate on changes underway in Cuba: Luis Duno-Gottberg’s stunning photo essay of an island in the deepest fray of uncertain transition and Armando Chaguaceda’s provocative take on the future of social movement politics on the island.

We are also thrilled to present the powerful poetry of Ciudad Juárez/El Paso’s Natalie Scenters-Zapico in our Arts and Reviews section, as well as sharp takes on recent books by Lesley Gill on Colombia’s civil war, Jeffrey Rubin and Vivienne Bennett’s edited collection on private sector responses to Latin America’s “left turn,” and Arlene Dávila’s new work on the politics and culture of shopping malls in the region.

Finally, this issue’s Archives section features Stuart Schrader’s reconstruction of a key moment in NACLA history: our role in closing down the notorious U.S. Office of Public Safety (OPS) in the early 1970s. Schrader’s piece is a fitting reminder of how much wellorganized communities of activists can accomplish when they have sources of information and analysis that cut through mainstream silences. As we look ahead to future Reports on trade, empire, and the TPP; the resurgence of the Right; and the Black Lives Matter movement across the hemisphere, we remain mindful of and committed to extending that important mission.

Read more from the issue by subscribing to the magazine here.

Alejandro Velasco is the Executive Editor of NACLA.

Joshua Frens-String is the Managing Editor of NACLA.