How will the United Kingdom’s vote to leave the European Union impact the ongoing sovereignty dispute with Argentina over the Falkland Islands (Malvinas)?

The results of the UK’s referendum in favor of leaving the EU released a wave of economic insecurity throughout much of Latin America. The Brazilian real and Chilean peso reportedly gained after Brexit, but the ensuing angst contributed to the devaluation of the Mexican and Argentine pesos. Compounding a low crude oil price and a strong dollar, the volatility exacerbated Venezuela’s crisis and may have long-term consequences for direct investment in Colombia. Brexit also emboldened Brazil’s anti-democratic government to expand its neoliberal project, by advancing trade negotiations between MERCOSUR (The Common Market of the South) and the EU, while pursuing an additional free trade deal with the UK

Xenophobia and imperial nostalgia may have been driving factors behind the “Leave” vote, yet ironically, Brexit may make Brittania’s last bastions more vulnerable in the Overseas Territories (OTs). The EU referendum was particularly distressing for the residents of the Falkland Islands (in Spanish, Malvinas), who voted 99.8% in favor of remaining British in 2013. The Falkland Islands Government (FIG)—a group of locally elected representatives and British contractors, legislating on all matters other than defense and foreign affairs—has indicated that losing tariff-free access to the single market would have considerable repercussions on trade.

Few realize that a whopping 50% of calamari consumed in southern Europe originates in Falklands waters. “The industry in the Islands has strong and historical links and joint ventures with EU-based companies, particularly in Spain. We are hopeful that such links will ease the process as the UK-EU negotiations take place over the coming months,” said Michael Poole, an FIG Member of the Legislative Assembly (MLA), in a personal communication with the author.

Prior to the vote, Poole cautioned British Tories that losing unfettered access to the EU market could be “catastrophic” for the Falklands’ economy. With an average total annual catch of 258,532 tons, the fisheries make up 5-10% of the global supply of squid. Since the establishment of Falkland Islands Conservation Zones in the late 1980s, the FIG has issued 243 licenses per year on average, accumulating an average annual revenue of £20.5 million. Fishing has become the most thriving commercial sector of the islands’ economy, representing 45-60% of GDP on a given year.

Much of this revenue has derived from licenses for Korean and Taiwanese flagged vessels fishing for Illex argentinus (Illex), a species of squid whose ecological niche straddles the Argentine and Falklands zones. Crew welfare on these jiggers has been the subject of heightened controversy. According to a report, there were 35 cases of “man overboard,” with 89 persons lost at sea from 1985-2014—in addition to 122 deaths on board ships caused by murder, fires or illness—all symptoms of the global affliction of sea slavery and servitude. 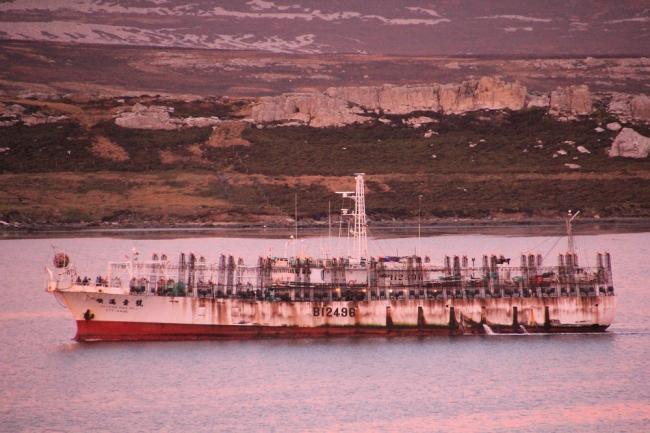 For nearly two decades, the Falklands’ fishing business consisted in little more than re-selling annual licenses. That changed in 2005, when an Individual Transferable Quota (ITQ) was established for all fish, besides Illex. The adoption of a long-term quota system, which triggered Argentina's government to stop sharing scientific knowledge of transboundary fish stock, was devised specifically for joint ventures between Spanish (Galician) fishing crews and a group of elite Falkland Islander license brokers. Their catch consists primarily of Doryteuthis gahi (Loligo or Falkland Calamari), a squid species exclusive to the Falklands Conservation Zones.

If the Falklands were forced to leave the EU’s Overseas Countries and Territories Association (OCTA), the introduction of tariffs may therefore have a serious impact on commercial fishing of Loligo squid and finfish, as well as the now less central wool and meat businesses.

Wool was the staple commodity produced in the islands under formal British colonial rule, and there are around 167 sheep for each permanent resident. Yet, despite its historical significance, wool exports no longer yield as much local revenue as commercial fishing, tourism, or offshore oil exploration. With the price of oil hovering below $50 USD per barrel, British operator Premier Oil has stalled development of its Sea Lion oil field complex, the first “commercial” discovery in the area.

Other implications for Brexit in the Falklands include losing a major source of funding for green economic initiatives in infrastructure development and scientific research. EU development schemes have allowed local energy consumption to transform dramatically from peat burning to wind power. To support biodiversity research, the Falklands-based South Atlantic Environmental Research Institute (SAERI) has secured a series of projects funded by the EU.

Anonymous sources in the Falklands’ private sector expressed embarrassment about not having much of an idea where Brexit will leave the Islanders. There is no precise sense of what the tariff rate might be under a new free trade agreement with the EU, and the “divorce settlement” will almost certainly not favor the UK. It is unlikely that the UK would be able to stay in the single market, following Norway’s model, for free movement of goods would likely necessitate budget contributions and/or the free movement of people—a prime target of Brexiteer hostility. Argentina, which claims sovereignty over the islands, could potentially block the UK from full membership in the World Trade Organization (WTO), and the Islanders may be forced to build better neighborly relations in order to access the South American market.

Two weeks before the EU referendum, former UK Foreign Secretary William Hague warned that voting “Leave” would put the Falklands’ sovereignty at risk. Alluding to the violent 1982 conflict with Argentina over the islands, he reminded voters that the UK’s responsibilities to the Overseas Territories were “serious enough matters for wars to have been fought over them even in our own lifetimes.” By naming the eccentric Brexiteer Boris Johnson as the new Foreign Secretary, Prime Minister Theresa May signaled that the Foreign and Commonwealth Office (FCO) will assert a bolder geopolitical presence under her direction.

May and Johnson are unlikely to craft a different policy on the Islands from that of David Cameron’s government anytime soon. However, there is precedent for Conservative Party politicians trying to sell the Islanders down the river to Argentina. In 1980, two years before Argentina’s military junta invaded the islands, Margaret Thatcher’s own Minister of State Nicholas Ridley promoted a “leaseback” deal with Argentina. Since entering office, Argentina’s president, Mauricio Macri, has promoted warmer relations with the UK. However, Foreign Minister Susana Malcorra has cleaved to her predecessor Héctor Timerman’s more confrontational “anti-colonial” diplomatic strategy, designed to provoke Cameron. A spoiled favorite for UN Secretary-General, Malcorra refuses to recognize the Islanders’ claim to self-determination and continues to press for bilateral negotiations with the UK.

Brexit stole the spotlight from a surprisingly discordant annual meeting of the UN Special Committee on Decolonization, which occurred the same day as the EU referendum. At the meeting, Malcorra attempted to shake hands with Falkland Islander petitioners, but one of them refused to accept her greeting. In her speech, she hinted toward improved connections, which may include allowing the Islanders access to a new air link (probably via São Paolo) and possible cooperation on trade with South America. Yet, besides these gestures and a more conciliatory tone, the content of her speech mirrored that of her forerunners. The committee passed another resolution in favor of Argentina’s call for dialogue, and a series of member states voiced support for Argentina, most from Latin America and the Caribbean, but also China and Russia.

Strikingly, unlike in past sessions, there was no member state support whatsoever for the Islanders’ claim of self-determination. Instead, members emphasized Argentina’s overwhelming support from regional organizations, such as MERCOSUR, CELAC, and UNASUR. The session served as a reminder for the Falkland Islanders that leaving the EU may also risk losing European allies in the international community.

In sum, while Brexit has produced economic uncertainty throughout much of Latin America, it has also isolated the Falkland Islands from Europe. The referendum may not have an immediate impact on the sovereignty dispute, but the introduction of tariffs would have economic ramifications. Falkland Islanders insist that they “are not a colony of the United Kingdom, and have no intention of becoming a colony of Argentina.” However, by choosing to “take back control,” Brexiteers turned not only on migrants and refugees who have been racialized as unwanted interlopers, but also on Britain’s far-flung settlers extracting resources in the Americas.

James J. A. Blair is a lecturer in Anthropology at Brooklyn College, City University of New York (CUNY). His current book project examines how the settlers of the Falkland Islands (Malvinas) are constructing themselves as “natives” through new forms of governance over natural resources. With support from the US-UK Fulbright Commission, the National Science Foundation, the Wenner-Gren Foundation, and the Social Science Research Council (DPDF), his doctoral dissertation research incorporated 20 months of fieldwork in the Falklands/Malvinas, Argentina and the UK.