Two Years of Torment, of Searching, of Refusing to Give Up

Cristina Bautista, the mother of Benjamín, one of the missing Ayotzinapa students, opens NACLA’s series commemorating two years since the disappearance of the 43.

This piece is the first part in our series on the two year anniversary of the Ayotzinapa disappearances on September 26, 2014.

This article was originally published in Spanish by Desinformémonos, on September 8, 2016. 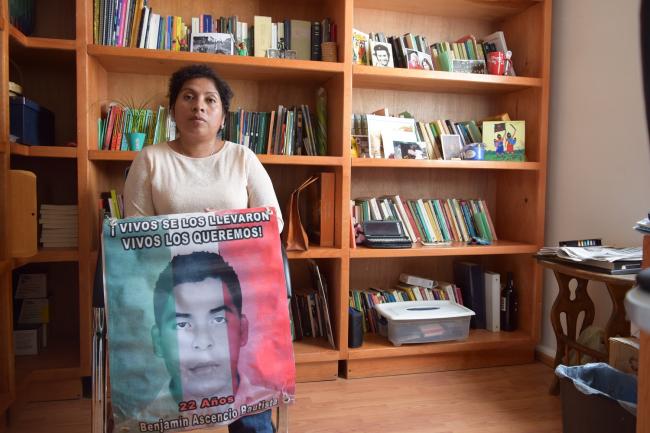 My name is Cristina Bautista Salvador; I was born and raised in Alpuyecancingo de las Montañas, which is in the Ahuacuotzingo municipality of the state of Guerrero, Mexico. I am 41 years old and a single mother of two daughters and a son. For the past two years, I have been searching for my son Benjamín Ascencio Bautista, a student at the Escuela Normal Rural Raúl Isidro Burgos of Ayotzinapa. Up until now, it has been tortorous to not have him, to be searching for him and to not be with my daughters. Despite such a radical life change, I will continue to demand justice.

Laura, Benjamín, and Mairani—my three children—and I had a peaceful life before all of this happened. I have practically raised them by myself since their father emigrated to the United States in 1999 to improve the quality of life for our family, but after some time passed, he stopped communicating with us.

In order to survive with my children, we planted corn to eat and to use to make bread. Benjamín and Mairani would leave each day at six in the morning to sell the two baskets of bread we had prepared, and when they returned, Laura and I would already have lunch ready to share amongst the four of us. On Thursdays we sold pozole and together we would serve, clear the tables, and clean up afterwards. All of this helped us to survive. We were happy in our village.

I had only been away from my children twice, on two occasions when I had to go to the United States for work in order to be able to build us a house. There, I learned to communicate, though without mastering the language—it was my hands, my working hands, that responded with the clear intention of bringing a better life back to my family.

Before Benjamín was disappeared, as someone from Guerrero, Mexico, I was only familiar with Chilapa as a place I passed through when buying flour and other ingredients we needed to make bread and pozole. Now I spend my life between here [Mexico City] and there [Guerrero] looking for my son and seeking justice for this time without him.

Benjamín always wanted to study, and found ways to do so. I always supported him in any way that I could to help him continue. He studied as much as he could in the community, and then went on to the local capital to go to high school.

For a year he went to Puente de Ixtla, in Morelos, to serve as a teacher through a National Council of Educational Development (CONAFE) program. In exchange for this year of work, they supported him for three years of continued study. So Benjamín took advantage of that.

It was during this time that he told me he had discovered a school, a normal, that trained teachers and that had internships for those like him, who were poor and wanted to study. He told me very enthusiastically that it was a very good school, and although it was difficult to get a spot, he was going to try. He was already dreaming of being a teacher.

We were always in touch, and when he had vacation, he would come home to spend them with us. He told me all about what he had been learning and the new dreams he had. He always told me that one day he would make enough money to support me. He said that now it was his turn to take care of me.

Meanwhile, I accepted a new job providing primary education to mothers, fathers, and children aged 1-4 in the village. We tried to reflect on how to give a better life and education to the girls and boys. I liked it, and they paid me 800 pesos, which I used to buy tools and materials for my children.

Now I have lost all of that: the work, the corn harvest, the bread sales. Now I search for my son and I search for justice for the past two years without him.

In April of 2014, it was time for the entrance exams to the Normal. He [Benjamín] asked me to light a candle so that it would go well. He asked for this, and asked me to trust that now he would be the one to help me.

To be honest, I asked him not to go, telling him that it worried me to have him so far away. He told me that he was already grown and that I always told them [the children] that one day they would grow wings and fly, and that that was his moment to fly. I had nothing more to say but tell him that I supported him.

On the 15th of June he had his exam, and he told me that he knew several classmates that had tried three times without succeeding, but on the first try he got in.

He was very eager to buy the materials that they required. His “scrape,” or razor, two quails, his machete for work, and food.  On the 20th of July his trial week began. I gave him 300 pesos that I got together for support. It took a lot of effort to convince him to accept the money, but finally he did. Now I know that he didn´t even want to spend the money, because I found it amongst his things that were left at the school.

September 15 was the last day that I saw him, that we talked, that we shared a meal.  At 6 AM on the 16th, he returned to school and I didn’t hear much from him because he explained to me that he was already busy with all of the activities at the normal. On September 25th, a day before the government disappeared him along with his other classmates, he was in touch with his girlfriend. I never heard from him again.

On September 26, 2014, the state and federal government attacked and stopped students from the Ayotzinapa Normal. Some were beaten up, others were stopped when they were preparing to go to Mexico City to participate in the commemorative march for October 2 [1968, in honor of the anniversary of the Tlatelolco Massacre, when hundreds were killed or injured when police opened fire on protesting students]. Forty-three of the students disappeared, including Benjamín.

I found out because a teacher at my youngest daughter’s high school asked her about Benjamín, as he already knew about the “confrontation” that occurred between the people who were detained and disappeared. Later my brother called me from Chilpancingo to tell me that my son was among the disappeared. He said it with the newspaper in his hand.

That same day I went to the school. I was very nervous when I got there, and I asked a student at the entrance gate, who had a list, about Benjamín. He confirmed that Benjamín was among the disappeared, but that they were already searching for him and that they would find him.

There, on the patio at the school I found the other mothers and fathers for the first time. They were crying too, but also cheering each other up. I really remember Luz María Telumbre, Christian Alfonso Rodríguez’s mother, who told me then, through tears and courage: “Don’t worry, the police and military will pursue them. Surely they went to hide in the mountains. Don’t worry, now there’s guava and corn there so they won't get hungry.” I won’t forget that day; to this day we continue walking together, searching for our children.

Since the day, when I arrived with nothing,I went to live at the school to start the organizing the search, the requests for help, the marches that continue to this day and will not stop until the government shows us our sons alive.

Local help from the organizations, along with help from organizations from other states and even other countries have helped to sustain us with food, clothing, and also with the strength to continue. They have accompanied us a great deal, but we continue to feel alone without our children.

On September 31, we went out for the first time to march, and to tell the government that it was their people who took away our sons, and there we demanded that they return them to us alive. On that day, we warned that we would not rest until that happened, and that’s how it is even today.

So that’s what I said to [Mexican president] Enrique Peña Nieto and to Miguel Ángel Osorio Chong [Mexico’s Secretary of the Interior]: How can you not know where our boys are if it was your people who took them? That if they could organize to shoot them, detain them, and disappear them, all communicating, they should also be able to look for them. [Editor's Note: This seems to refers to the existence of a coordinated federal intelligence unit in the area of the disappearance, which clearly reflects the students were being tracked and followed throughout the night of the 26.]

The government has tried to trick us. They told us that the boys were armed but that isn’t true. That there was a link with organized crime and that the boys responded, logically, that: “to be a narco it isn’t necessary to go to study at a rural normal school.”

As all of this happened I had to perfect my Spanish, because I speak Nahuatl, had to read and write more and better so that they couldn’t trick me. So I could continue to search for my son.

In 18 days, it will be the anniversary of two years of torture, two years of searching, of demanding justice. Today I hope that September 26 will not come without my son. That two years won’t pass without him, but that they bring him back, alive and well.

If this does not occur, we will continue calling on the authorities to respond, to the organizations that accompany us, to the families of the disappeared to join us all. To society to once again come out with us on September 26 to march, to demand justice, to organize.

We will continue here waiting for them— we won’t be silent, and we won’t give up.

Yunuhen Rangel is a Mexican journalist and photojournalist.

Translated from Spanish by Laura Weiss and Sam Kellogg.