Ayotzinapa’s Message to the World: Organize!

It has been two years since the crime of Ayotzinapa. The anniversary provoked a moment of soul-searching for Mexico - Part three in our series on Ayotzinapa after two years.

This article is the third and final part in a NACLA series reflecting on the Ayotzinapa case and commemorating the 43 disappeared students after two years. Read parts one and two here. Be sure to check out the Ayotzinapa timeline in its new home at NACLA. 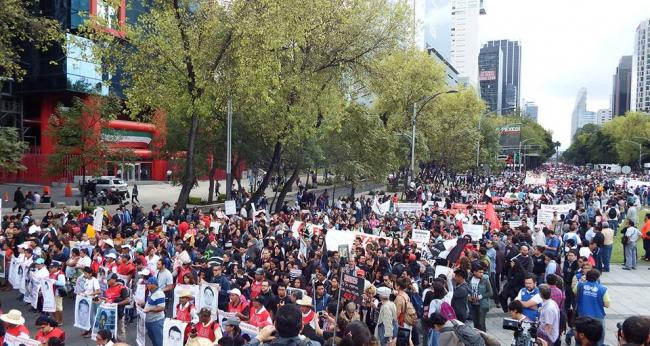 You can see it in the streets, where 30,000 marched on Monday, September 26, 2016. You can read it in the many articles and messages that look back to the terrible night that six lives were lost and 43 were disappeared—a night that forced a nation to come to terms with the violence and corruption at its heart.

This week, Ayotzinapa, the rural teachers’ college set on a mountainside in the dirt-poor state of Guerrero, marches again, like on the 26th of every month, but now to commemorate two full years of impunity and lies.

It could be a time for mourning, a time of rage. Both grief and rage showed on the faces and through the chants of the marchers in Mexico City and other cities throughout the country. The families still mourn. Their mounting frustration erupts into anger in their speeches to the crowd gathered in the city’s Zócalo. Every one of the mothers and fathers vow that they’ll keep raising their voices until— unless— their sons are returned. But after hundreds of nights of tears and scores of meetings, marches, press conferences, and community talks, parents and fellow students have one message: Organize.

“We need more participation of the people.  More serious and responsible organization,” said Omar Garcia, an Ayotzinapa student who survived the attacks and has become a powerful spokesperson for the movement to bring his friends back alive.

It’s the grassroots organization of organized family members and survivors— in Mexico and the world— that has kept the memory of the students alive far beyond the aggrieved hearts of their parents and has pushed the demand that the crime of the state be punished. After two years, to remember is more important than ever.

The Power of Transformation

Mexicans from all over the country felt something snap when they heard about the students who were abducted and disappeared in the city of Iguala. They responded with demonstrations that reached hundreds of thousands strong in late 2014. Their slogan—FUE EL ESTADO (IT WAS THE STATE)—changed the way people think about the Mexican government, its relationship to organized crime, and the War on Drugs that has taken more than 140,000 lives in the past nine years.

Looking back, there’s no doubt that the crime of Ayotzinapa has transformed the nation from below. While the government has responded by closing ranks and attempting to close the case, the people have taken to the streets.

The movement has been relentless in its demands before a government that refuses to investigate itself. The Ayotzinapa movement won a major victory in November 2014 when an independent body from the Inter-American Human Rights Commission was invited to Mexico to investigate the crime. Known as the Interdisciplinary Group of Independent Experts (GIEI by its Spanish initials), the group’s final report, released in April and presented in Mexico City in May of this year, showed that state involvement went far beyond the municipal police working with a local crime group.

In short, the report proved that the events of September 26 and 27 were coordinated actions between several government agencies, with the direct participation of at least the federal, state, and municipal police, and organized crime. It established the presence of the Mexican Army at the scene of the crime, and emphasized the importance of taking testimonies from the Mexican Army to clarify events and its role in them. The Mexican Army refused repeatedly to allow the GIEI to directly interview those military members who were involved the night of the crime – key in the Mexican state’s cover-up of the case.

What’s more, the GIEI report eviscerated the government position that the students were burned at the Cocula dump, for lack of consistency and proof. As the government of Enrique Peña Nieto put forth modifications to its false history of the case, the experts critically analyzed them and revealed the factual inconsistencies. In other words, the government story was exposed as a lie. Most glaringly, the state was left without a hypothetical motive, fanning suspicions that the students were attacked for political reasons and that government officials— on all levels— moved quickly to hide grave acts of corruption, complicity, and violence.

The group of experts left the country without having arrived at the truth—and without having found the missing students. They left, angry and disappointed, because the federal government refused to extend their investigation and continually created obstacles blocking them from finding out the truth. The experts presented evidence of a lack of cooperation from Peña Nieto’s Attorney General’s Office and other government agencies. The hundreds of people who listened to the presentation of their final report, and the millions more Mexicans who saw it or read about it, felt a deep sense of gratitude for the findings, but at the same time, they felt abandonment. When you live in a nation where impunity is the rule, impartial and professional assistance from outside can be a lifeline.

Still, there is no doubt that the grassroots organization that has made this case a turning point in history will continue to exert pressure to find the students and to the change the country. Omar Garcia sends out a challenge: “We’ve asked the Mexican government officials not to abandon the investigation, and we also want to ask the movement—the students themselves, people who have been involved in social change historically and those who have not but are beginning to be—that the struggle be for real. We have to transform this country.”

That means everyone, everywhere, and not just for Ayotzinapa. Ayotzinapa has become a symbol of how to fight back against the forces that seek to stifle the necessary rebellion of youth. The kind of transformation Garcia refers to is global and local, direct and transcendent.

“To organize in a serious way for us means to use the resources you have, as an individual and as a collective,” Garcia told me in an interview. “You can do things. And even though they’re very small things, do them. Inform yourself, analyze the information. Now information is accessible through the social networks. We don’t need Televisa and Television Azteca [state-controlled news outlets in Mexico] and all these other mass media. As long as you have an interest in being informed, you can find information.”

For Mexico, two years after Ayotzinapa, there is a huge unfinished agenda. The first point on the Ayotzinapa Agenda is to find the disappeared students, along with the other 28,000 disappeared in the country. Ayotzinapa spurred a movement for the disappeared that reminds us that the problem runs deep and affects thousands of families, and counting every day.

Other points include tasks related to the investigation itself: to follow up on unresolved questions, such as the unaccounted-for fifth bus that was escorted by federal police from the scene of the crime on September 26, 2014; to thoroughly interrogate, and prosecute if need be, military personnel involved in the events; to demand new interviews with witnesses, and the presentation and analysis of missing phone registers; to prosecute any government officials responsible for a violation of procedures, tampering with, destruction of, and loss of evidence, or the distortion of the facts; to further investigate evidence of torture discovered in at least 17 of the suspects’ questionings.

Most important are the big tasks of establishing why the students were attacked, killed, and disappeared—that is, exposing the masterminds of the crime and not just the perpetrators. And we must all take on a serious commitment to find the other 28,000 disappeared, demand prosecution for disappearance and forced disappearance (disappearance with the involvement of the state), and guarantee the safety of family members and human rights defenders.

These are government responsibilities, but in the context of a criminal state, society itself must assume responsibility. No one is exempt from this responsibility. In Mexico, the process has begun—in large part, because of the tragedy of Ayotzinapa.

Demands for truth and justice grow. The families of the disappeared in Coahuila, Veracruz, Guerrero, Morelos, and states throughout the nation remember and demand and search the fields for their loved ones with shovels and picks. Solidarity groups exist in every continent of the globe. The faces of the 43 are born solemnly in the streets of Madrid, Los Angeles, New York, and Athens. The movement struck a chord, a chord not just of compassion but of resistance.

Therein lies the hope amid the pain. “We have to participate, to dedicate part of our time to participate in organized associations to change the country,” Garcia states. “There are already examples on the national level, examples in different states, that can show us the way. On the Latin American level, too. There are experiences that demonstrate that you really can change things in a positive way.”

If grief-stricken mothers and fathers and friends and siblings can take on that challenge, so can the rest of us.

Laura Carlsen is the director of the CIP Americas Program.