No, Donald Trump is Not Hugo Chávez

The U.S. media has repeatedly drawn false parallels between Donald Trump and Hugo Chávez, reflecting widespread denial that Trump’s xenophobia and jingoism could be home grown. 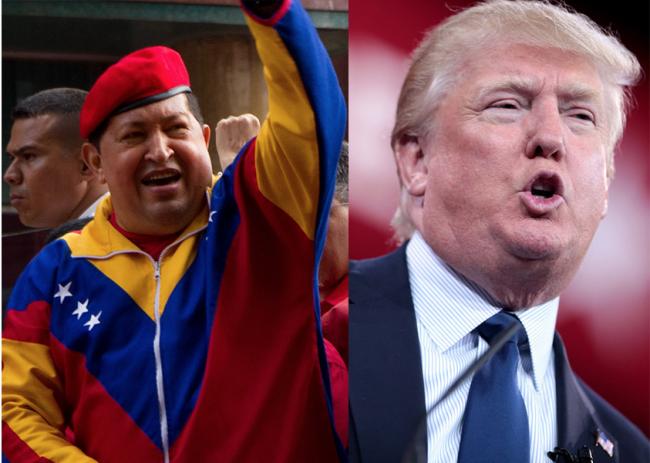 It's become a popular argument for political pundits with a solid command of junior-high school Spanish and a shaky command of history: Trumpism is the “Latin-Americanization of U.S. politics,” as an author in Foreign Affairs puts it. "Presidente Trump" is a "yanqui" populist who "echoes the comandante," Hugo Chávez ; "el Donaldo" has the "machismo" of an American caudillo and he brandishes the "mano dura" (hard fist) of his "Latin role models." It’s also a popular argument for Latin Americans contracted by U.S. media to explain Trump’s supposed latinidad. See, for example, Alberto Barrera Tyszka, a Venezuelan television scriptwriter, in the New York Times last month. His argument: Trump is an American Hugo Chávez: "Beyond their ideological differences," writes Barrera, "Mr. Trump, a populist right-winger, and Mr. Chávez, a leftist strongman, share the same telegenic vocation. They both built a career via television spectacle."

It's a terribly frail basis upon which to hang a comparison. Yes, Chávez had a Sunday television show, Aló Presidente, where he spoke at great length on the issues of the day and promoted his government's policies like a showman; Trump, too, has been on TV shows. So we have a TV scriptwriter saying that no decent U.S. politician would debase himself by conducting politics via the boob tube, unless Chávez had given him the idea. (John F. Kennedy's ghost would probably like a word.)  Barrera’s bigger point was brought home by the illustration that accompanied the article: a red beret, like the one Chávez sometimes wore, inscribed with the Trump slogan, “Make America Great Again.” The obvious implication: Trump’s nationalism is a foreign intruder, out of place in the United States.

Political scientist Jennifer McCoy chimes in at Reuters: "Hugo Chávez and Donald Trump are both outsized personalities seeing themselves as the sole leaders capable of restoring their countries to greatness," she writes. "They eschew political correctness and routinely speak in an informal, unscripted style, connecting directly with voters who have felt invisible." This comparison is no less superficial. If you replaced “Hugo Chávez” with "Ronald Reagan,”—who, after all, was the first to use the slogan “Make America Great Again"—no one would blink, even if they might not like the comparison. And then there's Ben Wofford in Politico, who took a vacation to Ecuador, and then reported back with his assessment of Latin American "populism." Wofford learned that populism is defined by a "cult of personality, rage against the elite, unbridled machismo, acerbic disregard for the rules—coupled with an apparent willingness to break them at nearly any cost."

The notion that the United States might have to outsource production of its paranoid style of nationalism is ridiculous, but the argument for Trump’s foreignness, and particularly his “Latin-ness,” has a strange, almost pathological, staying power. Barely a week goes by without a new angle on the argument. One of the first came from Wall Street Journal columnist Maria Anastasia O’Grady, who added a comparison to the mid-century Argentine president Juan Domingo Perón. She accused the Trump campaign of turning the “developed” United States into “bananalandia.”  This second insult—the U.S. as “banana republic”—has been a popular one ever since 2008, used by both liberal and conservative politicians and writers to describe dysfunction and anxiety at home. Trump’s success is a sign, not just of the Latin Americanization of U.S. politics, but the decline of the United States itself. The United States’ income inequality is turning it into a “banana republic,” the liberal columnist Nicholas Kristof wrote in 2010. “It is total confusion—a banana republic,” said Rep. Peter King, Republican of New York, of gridlock in the House of Representatives last year. Even for these ostensibly anti-Trump partisans, political or economic crisis can only be understood in nationalist terms. There lurks in the background of these laments a Trumpian nostalgia for the days when the “real” banana republics knew their place—and we knew ours.

The Mexican essayist and editor Enrique Krauze makes the latest version of the Latin American Trump argument in Slate. Krauze uses Chávez as his major point of comparison to Trump but fleshes out his argument with a litany of other Latin American “populists”—everyone from Perón to Castro to Santa Anna and Bolívar, the last of whom is pictured with Trump’s head superimposed on his famous epauletted uniform. These men were all representatives, he says, of a Latin governing style going all the way back to the Spanish monarchs. The suggestion of this deeply ahistorical thesis is that there is something cultural about the authoritarian and admonitory style that thrives in the Hispanic world. “Now, disgracefully,” Krauze writes, “the United States seems to have contracted a form of this potentially lethal virus.” Is this not at least as distasteful as Trump, his wall, and his racist caricatures of Mexican migrants? He can build his wall, but that will only keep out bodies and, perhaps, manufactured goods; what wall can you build against the contagion of ideas that Krauze imagines seeping across our southern border?

Americans (and Latin Americans too) have long written about Latin Americans, politicians and otherwise, in this way: as acerbic machos, driven by their rage and passionate impulses, vainly covetous of cultish devotion. Richard Harding Davis made the late nineteenth century's version of this old critique. In his 1896 travel book Three Gringos in Venezuela and Central America (he also liked to toss in a Spanish word or two), Davis wrote of Honduran politicians: "The value of stability in government is something they cannot be made to understand. It is not in their power to see it, and the desire for change and revolution is born in the blood.” When Davis speaks of “blood,” he refers to race, ethnicity, and also climate. Even a New York-educated Honduran, he wrote, would turn into a “revolutionist” as soon as he smelled the “powder on his native air.” Whether we prefer the metaphor of “blood” or “virus,” though, these are ways of attributing politics, something contingent and shaped by circumstance, to culture, something timeless and shaped by essences.

Today's Trump-Chávez comparisons make Davis’ basic error of eschewing political analysis for cultural generalization. Chávez and Trump are political opposites, something many of these critiques acknowledge swiftly and grudgingly, before moving into the cultural analogy. Chávez was a socialist and a Third-World nationalist, Trump an authoritarian right-winger and proud imperialist. Chávez’s popularity drew upon the class and racial divisions of a deeply stratified urban society, and his skin color was a source of resentment for many of his white, middle-class opponents. (If anything in Venezuela’s political dynamic reminds me of Trump, it is the paranoid racism that has thrived in the anti-Chávez opposition.)

Trump’s support, meanwhile, comes from  whites in his country’s suburbs and exurbs, and he gained political prominence by stoking their racial paranoia about a usurping African American president. Even their superficial stylistic similarities, like outsized personalities and a taste for provocation, conceal more than they reveal: they both eagerly goaded their enemies, but they had different enemies. And while Chávez enjoyed dramatic confrontations with the Venezuelan opposition, even his most fervent critics acknowledge that he pursued them patiently and tactically. Whatever you think of him, Chávez, at the very least, was a lot smarter than Trump.

It's difficult to see this, though, if like Davis a century ago you insist on seeing Latin American politics as basically exotic, temperamentally and philosophically misaligned with the United States.

Even as Latin America regularly appears as the United States’ exotic foil, though, it is also its flattering vanity mirror. This is the absurdity in pieces like Krauze’s and Barrera’s: they suggest that there is something sordid, something corrupt, something frankly un-American about Trump's demagoguery. And yet Trump has won a major American primary. How to make sense of this? In order to read Trump as an exotic macho, the symptom of a contagion from abroad, you have to first presume that  politics in the United States are normally clean, orderly, intellectually honest, focused on the "issues," undetermined by posturing, resentments, and prejudices. Few sensible observers would say something so plainly ridiculous. But Trump, because of his idiosyncrasies and his violation of many recent electoral conventions, sends pundits scrambling for foreign comparisons to explain it all. And so, reflected in the flattering mirror of our Latin American stereotypes, U.S. politics comes out looking like the democratic system we never knew we had.

This inability to think beyond the comforting cultural generalizations does nothing to help us understand Trump, much less the “populist” leaders he’s compared to.  Nor are they effective at combating him. The comparisons ultimately reveal a basic, fundamental irony to which their authors seem perfectly oblivious: in treating Trump's authoritarianism as a Latin contagion we must secure our nation against, they sound an awful lot like Trump. A lot more than Chávez ever did.

John Patrick Leary is assistant professor in the English department at Wayne State University in Detroit. He is the author of A Cultural History of Underdevelopment: Latin America in the U.S. Imagination, out now from the University of Virginia Press.