Recent attacks on members of the Civil Council of Popular and Indigenous Organizations of Honduras (COPINH) have not altered the U.S. decision to send the country its full funding package. 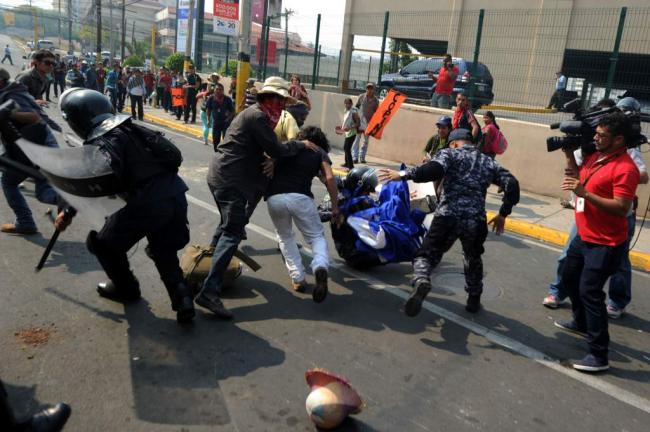 On October 20, riot police and members of the Honduran National Police attacked members of the Consejo Cívico de Organizaciones Populares e Indígenas de Honduras (Civil Council of Popular and Indigenous Organizations of Honduras, COPINH) with tear gas, rubber bullets, and a water cannon in Tegucigalpa, according on the ground video footage. The violence erupted at a demonstration demanding answers in the death of COPINH environmental and human rights activist, Berta Cáceres.

In response to the recent surge in violence against human and environmental activists in Honduras, Amnesty International has declared the region a “no-go zone for environmental [and human rights] defenders,” according to a statement from the group.

Environmental activists in Honduras have gained international recognition since the murder of former COPINH leader Berta Cáceres, who was shot dead in her home in March. The international community condemned the crime, prompting several U.S. representatives to put forth efforts to suspend all U.S. security funding to Honduras. In June, The Guardian reported that a former soldier claimed Cáceres was on “a hit list distributed to U.S.-trained special forces units of the Honduran military months before her death.”

Karen Spring of the Honduras Solidarity Network, who participated in last week’s demonstration with COPINH, explained that members of COPINH started their demonstration at the National Autonomous University of Honduras, eventually arriving at the public prosecutor's office where they held a press conference to talk about the advances, or the lack thereof, in the Cáceres murder case.

Moments later, during what Spring said was a spiritual ceremony, video footage from on the ground shows militarized police forces forming a hard line and closing in on the crowd of demonstrators. The Cobras, as the National Police are known, can then be seen throwing tear gas into the crowd. As the group scatters, a commotion erupts and tensions rise before a water hose is seen spraying demonstrators.

“All of a sudden out of nowhere they started throwing a huge amount of tear gas. It wasn't expected at all, I was surprised how fast they got aggressive and repressed us," Spring said. "At one time I think they threw 10 canisters and flooded the whole area, and because people weren't paying attention, there was no time for elderly individuals or children to get out of the area.”

Despite the strong concerns expressed by members of COPINH, human rights and environmental defenders, members of the U.S. Congress, and countless individuals in the U.S. and around the world, U.S. Congress recently certified “that Honduras has taken effective steps to meet the [human rights] criteria specified in the Fiscal Year 2016 appropriation legislation,” and approved the release of the full package of security funding.

While the State Department has publicly acknowledged that not everything is “well and good” in Honduras, they claim that they’ve seen “a demonstration of political will by the Honduran Government,” arguing that the administration of Juan Orlando Hernández has “taken on and made progress against some of the country’s security and developmental challenges.”

Between 2008 and 2015, the U.S. has appropriated at least $1.2 billion to Central America through the Mérida Initiative and the Central America Regional Security Initiative (CARSI), according to research from the Congressional Research Center.

Under the Alliance for Prosperity Plan, the $750 million U.S. response to the influx of immigration that came from Honduras, El Salvador and Guatemala in 2014, 50 percent of the total funding is tied to human rights-related conditions drafted by Sen. Patrick Leahy. The State Department must certify that these conditions have been met before releasing the final portion of the aid. Since the death of Cáceres, human rights movements have advocated for U.S. security aid to Honduras to be cut off entirely, as human rights violations continue to persist in the region.

“The assassinations of José Ángel Flores and Silmer Dionisio George of MUCA, whom the IACHR (Inter-American Commission on Human Rights) had said should be protected, and the attempted assassinations of Tomas Gomez Membreño and Alexander Garcia Sorto of COPINH, are glaring examples of why the U.S. State Department should not have given Honduras human rights certification,” Dan Beeton, International Communications Director at the Center for Economic and Policy Research (CEPR), said in an email statement.

State Department Spokesperson John Kirby addressed questions regarding the release of aid raised at a daily press briefing on October 21, the day after the clashes in Tegucigalpa.

“We note that the situation…in Honduras is extremely complex with high rates of impunity, crime, and corruption,” Kirby said. “There’s plenty of work to be done. We’re going to continue to press the Honduran Government to conduct prompt, thorough, and transparent investigations into cases like this and to homicide cases and to ensure that those responsible are brought to justice. But I’m not aware that these recent activities will in any way change our certification of September 30th.”

Honduras hasn’t been the only country where human rights concerns have been called into question before U.S. backed security funds were approved. Despite a long list of alleged human rights abuses, most notably with the disappearance of 43 students from the Ayotzinapa Rural Teachers’ College in Iguala in 2014, this year Mexico will also continue to receive its full U.S. security package.

Kirby went on to explain that the State Department was “deeply concerned about the continued problems in Honduras from crime, corruption, and impunity.” However, “As we stand here today, we are comfortable in the certification that we made at the end of last month, but it doesn’t mean that we turn a blind eye as we go forward. We always review and assess going forward,” Kirby said.

To justify supplying security funding to the region, USAID has used a 2014 report conducted by the Vanderbilt University-based Latin American Public Opinion Project (LAPOP) with support from the U.S. Agency for International Development (USAID), which found the CARSI program was, in fact, reducing crime in the region. Up until this year, this report was the only public evaluation of the CARSI program, supporting claims that the crime and violence prevention programs have been effective. But the Center for Economic and Policy Research (CEPR) recently released a report that disputed these findings and questioned the efficacy of the CARSI program in Central America. It is clear to the researchers that impunity continues unabated in Honduras, enabling crimes like the repression of protesters and recent assassination attempts.

“Cases like this continue to occur with impunity,” Beeton said. “Investigations, if they happen, are fraught with problems. The investigation into the murder of Berta Cáceres is no closer to revealing the people who ordered her killed, and most recently, the case files were stolen. This is why COPINH protested in Tegucigalpa last week, and their protest was violently repressed by militarized forces with little warning, sending children and elderly demonstrations scrambling for safety.”

Karen Spring believes that the increase in violence and repression that environmental and human rights activists have faced this year results from increased funding that Honduran security forces have received from the U.S. through programs like CARSI. Spring explained that since Juan Orlando Hernández became Honduras’ president in 2014, the United States has sent more money for military and police assistance.

According to Security Assistance Monitor, the U.S. appropriated more than $11 million to Honduras in military and police aid in 2014. That amount rose to more than $20 million in 2015 before dropping slightly to just over $18 million for 2016. Since the inception of the CARSI program in 2008, the U.S. has provided more than $109 million to military and police aid programs in Honduras, with another $17 million expected in 2017.

“The role of the U.S. government in enabling this repression has been absolutely critical,” Spring told me. “There’s more repression this year and it's directly linked to the increased funding from the U.S,” she said.

After the most recent violent clashes in Tegucigalpa, the Central American Resource Center (CARECEN) also publicly denounced the threats in a statement. In addition to condemning the threats and demanding the protection and security of human rights defenders and indigenous leaders, the group also stood in support of COPINH’s five demands. The demands include the installation of an independent and international commission to investigate the murder of Cáceres and the cancellation of the concession to the Agua Zarca Dam Project and the DESA Corporation, among other things.

“We are concerned for the life of the COPINH leaders and organizers and human rights defenders in Honduras,” CARECEN’s statement reads. “We call on the Honduran presidency of Juan Orlando Hernández to conduct a full and exhaustive investigation of the assassination attempts against Tómas Gomez Membreño and Alexander Garcia Sorto and guarantee their safety to live and organize in the country.”

CARECEN has also demanded that the Obama administration “withhold all aid to the Honduran government until the human rights violations against COPINH and the over 200 environmental rights activists murders, many of them indigenous peoples, are effectively investigated and those responsible are brought to justice.”

As the climate in Honduras becomes increasingly more dangerous for human rights and environmental leaders, the continuation of U.S. security aid to Honduras will continue to be a point of contention moving forward.

"It is clear that only withholding aid for Honduras' security forces will send the kind of message that the Honduran authorities will actually hear,” Beeton said.

Parker Asmann is a bilingual independent reporter from Chicago focusing on issues of human rights and social justice that impact the Latinx community in the U.S. and Latin America. His work has been featured in In These Times magazine, AlterNet, El BeiSMan, and The Yucatan Times in México. Read more of his work at http://pasmann.wordpress.com or contact him at Parker.J.Asmann@gmail.com.