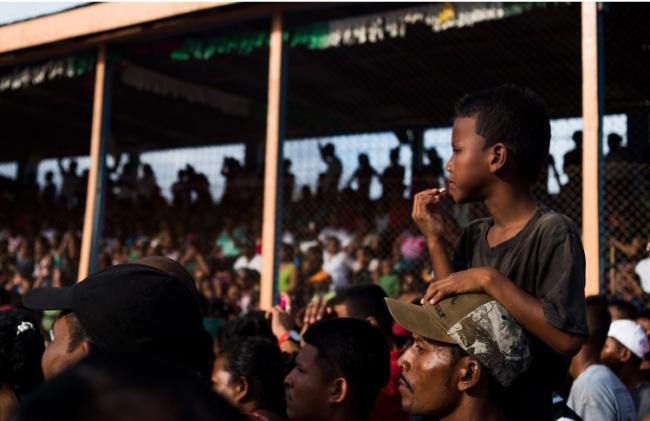 Daniel Ortega has been Nicaragua’s president four times – first from 1984-1990, and again in 2007, 2011, and 2016 after the National Assembly abolished terms limits in 2014. As he has consolidated his political power, Ortega’s once-celebrated record of commitment towards social and human rights has crumbled. Rather he appears determined to create a family dynasty.

In this year’s election, Ortega effectively ran as an unopposed candidate, with his wife, the immensely popular Rosarillo Murillo (“Chayo”) as his running-mate. Ortega sons and daughters occupy high positions in the central government, and Murillo herself plans to run for president in 2021.

Critics have denounced the election as a farce because Ortega refused any participation by international and accredited independent election observers. In response to the alleged election irregularities, the U.S. House of Representatives recently unanimously passed the Nica Act, which, if approved by the Senate, will withhold most bilateral funds from Nicaragua.

Nicaraguans reacted to this lack of democratic process by not going to the polls. The Nicaraguan Center for Human Rights has presented evidence of high voter abstention, stating that only 32 percent of eligible voters cast a ballot, while the Supreme Electoral Council (CSE) reported 68.2 percent. Roger Arteaga, President of the Nicaraguan non-profit Hagamos Democracia (Let’s Make Democracy) called it “a travesty that we went to vote”.

The Yatama party is headed by its founder Brooklyn Rivera, who has served as a Miskitu Indian leader for over 35 years. The party was founded in 1987.

Rivera’s and Ortega’s supporters first faced off as enemies during the U.S.-backed Contra war during the Nicaraguan revolution (1979-1990) when Miskitu Indians demanded greater regional autonomy which led them to join the Contras against the Sandinistas. In 1987, they achieved an agreement with the Sandinista government assuring them regional autonomy through the formation the North and South Caribbean Coast  Autonomous  Regions, known as RACCN and RAACS.

In 2006, Yatama made an alliance with Ortega’s FSLN, enabling Rivera to become a national Assemblyman and President of the government’s Asuntos de los Pueblos Indígenas, Afrodescendientes y Regímenes Autonómicos (Indigenous, Afro-descendant, and Autonomous Regime Affairs). Rivera broke with the FSLN in March 2014, accusing the FSLN of stealing regional elections.

Rivera remained in the National Assembly but joined saneamiento, a movement to prevent mestizo colonists (colonos) from settling on Indian and Afro-descendant lands. Despite the 1987 law granting autonomy (Law 28) and a communal property law (Law 445, passed in 2003), settlers have invaded and now illegally occupy half of the Muskitia rainforest region.

Violence has erupted between colonists and the Miskitu near the Coco River, the international border between Honduras and Nicaragua. Following the September 2015 clashes in the northeastern Wangki Twi-Tasba Raya and Li Aubra Miskitu territories, the FSLN majority leader accused Rivera of selling Indian lands. Rivera was ousted from the National Assembly and stripped of his immunity.

The FSLN ‘s attempt to criminalize congressman Rivera, and turn his own people against him, failed miserably. The pueblo became more unified, fortifying the Yatama party and prompting Rivera to run as an independent candidate for regional diputado in the 2016 general elections. Indigenous (Miskitu, Mayangna, and Rama) and ethnic (Afro-descendant Kriols and Garifuna and some native-born mestizos) allies rallied behind him and the Yatama party. Much of the support came from the saneamiento movement and those in opposition to the FSLN-approved inter-oceanic canal. 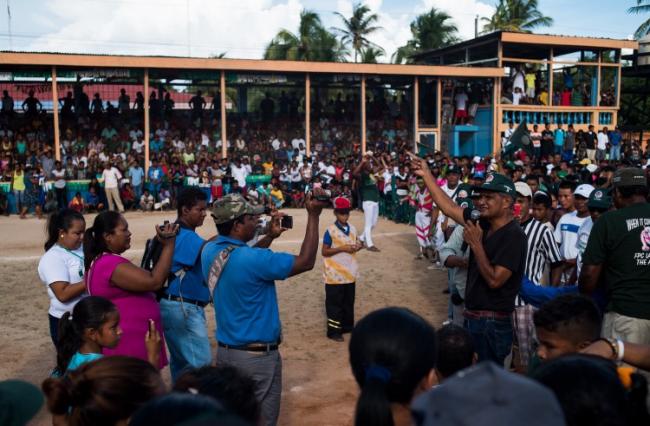 “There is serious doubt about the transparency, the cleanliness and the purity of this [electoral] process,” says Rivera. He explained that Yatama had spent months recording who had the right to vote, a role normally reserved for state institutions. Yatama discovered numerous obstacles to rural voting. Nonetheless, Yatama hoped that two or three of its five candidates, three in the North Caribbean Coast Autonomous Region (RACCN) and two in the South Caribbean Coast Autonomous Region (RACCS) would win seats.

Yatama campaign’s ‘grand finale’ march against Ortega was held in northeastern Puerto Cabezas-Bilwi on Nov. 2. Over 10,000 Yatama supporters took to the streets, closing down the town. Fernando Montero, a Columbia University anthropologist, remarked that “the march had such spirit…Yatama included the old and young, and so many women…it was an incredible showing of support.” Alvaro Rivas, editor of the WANI journal, said, “The coast had the only successful march in opposition to the FSLN in the entire country…they would be proud to have these numbers in Managua.”

On the eve of the election, Rivera’s official candidate registration name-tag hung around his neck like a talisman, as he fielded constant messages coming into his Samsung smartphone. He stayed up praying all night. When Rivera won a diputado position, the Yatama Facebook (Yatama Aslatakanka) page blew up with enthusiastic posts. Sammy Allen, a Miskitu youth leader living in Panama, wrote, “Rivera challenged the mighty power of the Daniel-Ortega dynastic couple and won…he now walks back into the Assembly through the front door.”

Yatama planned a victory march the next day. Then the CSE failed to release election results on the coast and transferred the ballots to Managua for a recount without Yatama observer presence. Party leaders feared that Rivera’s election would be stolen, as had occurred to party candidates during the 2014 regional elections. The Yatama march spontaneously evolved into both a victory and protest march. Nicaragua’s principal newspaper, La Prensa, reported the following week that the CSE had broken national law when it refused to announce the results for the RACCN, while releasing the results for the rest of the country. 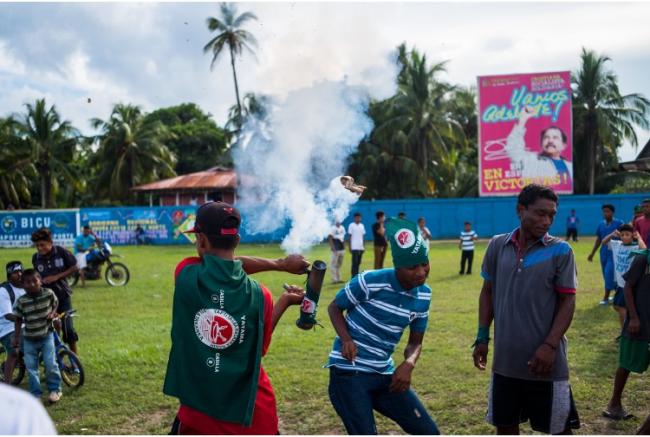 The next day, the central government in Managua flew in 100 more riot control police and Puerto Cabezas-Bilwi became militarized overnight. Bilwi Stereo, the local FSLN radio station, blamed the violence on foreign academics conducting research on the elections— including ourselves—accusing us of financing the indigenous party. The December 2015 passage of the Sovereign Security Act had provided authorities the ability to arrest, detain and expel foreign visitors if they were considered a threat to the state. At least twenty-four international visitors have been expelled from the country, some detained without charges or the ability to notify their consulates or families.

These acts of intimidation underscore the authoritarian turn of the FSLN government. Accusing outside agitators denies agency to Yatama and discredits their ability to self-organize. It also calls into question the future of regional autonomy. “It is very shameful to talk about autonomy at this moment,” said Rivera, who expressed concern that the region may eventually lose its autonomous status.

Yatama officials under the leadership of Saturdino Villarreal have released a public statement accusing the FSLN of denying Yatama supporters voter identification cards, eliminating their names from registries and putting them on voter rolls in other districts, and bribing residents to cast their ballots for FSLN candidates. Yatama alleges that the FSLN used “briefcases of money” totaling seven million cordobas ($240,000 USD) to buy votes.

Yatama further accused the FSLN of harassing Yatama supervisors at the polling stations, allowing their supporters to vote multiple times, and of coercing government and civil society employees into transporting FSLN voters to the polls. “There is so much evidence that the official party is controlling everything,” said Yatama’s Nancy Elizabeth Henríquez. Her statement proved to be true. After ballots from the Caribbean coast were taken to Managua for a re-count, the official daily La Gaceta and the CSE official site published differing electoral results, revealing that the CSE had doubled the FSLN vote in the RACCN and the RACCS.

In an electoral system based on proportional representation, the CSE announced that the FSLN had won three diputado seats (two in the RACCN and one in the RACCS); and that Yatama in the RACCN and the Partido Liberal Constitucional (Constitutionalist Liberal Party, PLC) had each won one seat each. Only Rivera was officially allowed a Yatama diputado position, with Nancy Elizabeth Henríquez as the alternate. One Yatama member suggested that it was likely that the CSE only allowed the re-election of the high-esteemed Rivera to prevent his supporters from “burn[ing] the city to the ground.” In total, FSLN will control 71 of the 92 legislator seats in the National Assembly.

The Nicaraguan media has covered allegations against the FSLN-controlled CSE extensively. In La Prensa, Jose Antonio Peraza wrote, “with the duplication of the vote, the FSLN has clearly robbed Yatama of a diputado…. these fraudulent actions by the FSLN are nothing new.” After the 2011 general elections, the Organization of American States (OAS) called on the CSE to undergo substantial reform.

Despite the electoral tampering, Ortega’s Sandinistas have over fifty percent of the nation’s popular support. Extensive social programs such as improved access to schools have contributed to Ortega’s popularity, and the opposition on both the left and right remain fragmented and unable to mount an effective campaign against him.

The FSLN’s manipulation of the November elections is clearly a blow to Nicaragua’s democracy. As Brooklyn Rivera prepares to take his seat in congress, relations have calmed between the Miskitu and Sandinista supporters on the coast. Yet, Yatama continues to protest the election results and Puerto Cabezas-Bilwi remains occupied by riot police. Despite the FSLN’s attempts to silence the indigenous and Afro-descendant people of the Caribbean coast, Yatama’s recent show of strength demonstrates that its support base continues to grow.

Laura Hobson Herlihy received her doctorate in anthropology from the University of Kansas in 2002 and has since worked as a lecturer in the KU Center of Latin American and Caribbean Studies. Herlihy has carried out research among the Honduran and Nicaraguan Miskitu for over twenty years and since 2011, has directed a summer Miskitu language program in Puerto Cabezas-Bilwi.

Brett Spencer is a historian and PhD researcher with Leipzig University’s Global and European Studies Institute. His research focuses on the processes of and resistance to internal colonialism, and he has spent several months working with the Miskitu of Honduras and Nicaragua.