"Buen Vivir" for Whom? 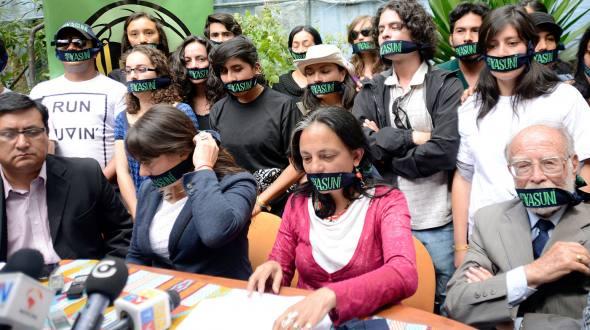 The Quito-based NGO Acción Ecológica just narrowly escaped a government-imposed shutdown, exemplifying the increasingly difficult climate for indigenous leaders and environmental activists in Ecuador. Paradoxically, the country, under the leadership of President Rafael Correa, has enshrined the concept of Buen Vivir (roughly, “plentiful life”) and protections for Pachamama (Mother Nature) into the Constitution. And while Correa condemned the environmental and human rights violations by multinational corporations in his address to the UN as Ecuador took over the presidency of the G77 on January 13th, his administration has refused to protect its own indigenous and environmental rights defenders.

Despite its professed commitment to protection of Mother Earth and to placing sustainable living over profits, Ecuador under Correa has pursued a resource extraction strategy that prioritizes short-term revenue generation over environmental protection and indigenous territorial rights. When indigenous communities protest the resource extraction projects that encroach upon their ancestral territories, the government often defames, criminalizes and even threatens them, alongside their environmental NGO allies.

The latest round of such persecution began in December 2016. On December 20th, Ecuador's Ministry of the Environment announced the initiation of proceedings to shutter Acción Ecológica, the country's leading grassroots environmental organization. The organization founded the Keep It In The Ground movement, which has become a global call to support the scientific mandate to keep all remaining fossil fuels in the ground.

The Interior Ministry, which introduced the closure proceedings, made it clear that the move was a direct response to the group's efforts to raise awareness about ongoing protests by the Shuar indigenous people against a planned copper mega-mine in San Carlos Panantza’s Cordillera del Cóndor, where the Andes meet the Amazon. The government had granted Chinese mining conglomerate Explorcobres S.A. (EXSA) the right to rights to mine for copper in nearly 116,000 acres of rainforest and agricultural land in Morona Santiago Province, although half of that concession overlaps with Shuar ancestral territory.

International law through the International Labor Organization Convention 169 and Article 57 of Ecuador’s Constitution, require consultation with landholders before pursuing projects which affect their land, but  the government granted the mining concession was granted without consulting the Shuar.

As the mining project moved forward, the Shuar tried to engage various government entities in dialogue. When those attempts failed, the Shuar turned to protest. As the protests began, Acción Ecológica warned that the government’s response to the Shuar protests would escalate the conflict between the Shuar community of Nankints, the government, and EXSA.

In August of 2016, military and police forces forcibly evicted Shuar families from land the company needed for the mine. After a lack of adequate response from the government, the Shuar attempted to return to those lands in late November, but were met with heavy police and military presence, including air assaults, and several community members sustained injuries. When the vice president of the Shuar Federation tried to mediate, he was arrested.

Instead of heeding calls from regional and national indigenous federations for dialogue, the government continued its heavy-handed approach, and the conflict escalated. In mid-December the protests turned violent, resulting in several injuries and the death of one policeman. The government then declared a 30-day "estado de excepción", or state of exception—essentially suspending rights and due process— and sent in the military, complete with armored tanks.

President Rafael Correa wasted no time in taking to the airwaves and Twitter to defame the Shuar, calling them "semi-delinquents" and implying that they were using extortion for material gain. Then, the same evening as the Acción Ecológica shutdown announcement, the national police raided the offices of the Shuar federation, and detained its president, Augustín Wachapá.

“The fact that violence has escalated in Nankints, resulting from the invasion of indigenous territories by a Chinese transnational, is the responsibility of the State that does not have the capacity to listen, dialogue and resolve conflicts,” the National Indigenous Federation of Ecuador (CONAIE) wrote in a statement.

The heightened tensions resulting from the state of emergency also spilled over into a neighboring Amazonian province. On December 19th in Pastaza province, the Kichwa of Sarayaku, who had publicly declared support for the Shuar and called for dialogue, discovered 11 soldiers traveling unannounced through their ancestral territory— over which they have sovereignty. After talks with the governor of Pastaza and the brigade commander, the soldiers were peacefully and safely released to Ecuadorian authorities, yet Correa publicly claimed that Sarayaku "kidnapped" the soldiers and fired the governor of Pastaza for negotiating with Sarayaku for the soldiers' release. Now, Sarayaku leaders face potential criminal prosecution and had to present testimony before a judge on January 19th.

The recent crackdown on Acción Ecológica is just one example of how the Correa administration has criminalized those who defend indigenous rights and the environment. In fact, the Ecuadorian government tried before, in 2009, to close the organization, which similarly failed after Acción Ecológica provided an abundance of evidence that it was acting in full accord with its mission and Ecuadorian law. In 2013 the government successfully shut down the environmental organization Fundación Pachamama for its support of a protest denouncing new oil concessions on indigenous lands in the country's southern Amazon region.

Acción Ecológica didn’t take the latest round of government attempts at sabotage lying down, knowing that they had simply been doing the legal and legitimate work the organization was founded to do. "We will continue to defend the rights of both humans and nature," its members said in a statement after the closure announcement. Members participated in protests in Quito, called national and international allies for support, and publicly defended their actions.

"We reject the assertion of the Ministry of the Environment that we have violated national law," the statement continued, and, in fact, "our actions are in full harmony with [the government's] National Plan for Buen Vivir 2013-2017," which calls for participatory management of the country's environmental treasures like the Amazon.

In fact, many of the Correa administration's landmark environmental initiatives actually originated with Acción Ecológica, like the the 2007 Yasuni-ITT initiative, which it proposed to the government in order to prevent oil drilling in Yasuni National Park in exchange for financial contributions equaling half of the country's forgone revenue. Correa’s support of the initiative may not have been genuine, however, as revealed in government documents showing secret negotiations with Chinese companies occurring at the same time Correa was promoting the Yasuni-ITT campaign.

After the campaign failed to raise anywhere close to the $13.3 billion Correa said was necessary to protect Yasuni-ITT, Correa pulled the plug and approved drilling. Acción Ecológica then spearheaded the formation of Yasunidos, a national grassroots collective that gathered over 750,000 signatures to force a vote on drilling plans in Yasuni, 30% more than the legal requirement, despite direct attempts by Correa to smear and delegitimize the movement. However, the National Electoral Commission deemed so many signatures invalid that the vote never happened.

Although Acción Ecológica will remain open for the time being and continue its resistance to the government’s development model and treatment of indigenous communities, the Shuar do not have such happy news to report.Though five of the Shuar detained after the state of exception have been freed for lack of evidence, it has been renewed for another 30 days, and the area remains heavily militarized. Shuar federation leader Agustín Wachapá remains in prison in “preventative detention,” which Ecuadorian law allows for up to three months.

“Do not tell us that you undertake mining projects to get us out of poverty,” the Shuar said in an open letter published on January 4th, “Because we, with our way of life, do not feel poor. Instead, tell us how you will protect us as a people and our culture.”

Environmental activists in Ecuador are no strangers to criminalization attempts by the government, and EXSA’s copper mine is by no means the only Chinese company in Ecuador with natural resource extraction projects facing opposition from affected indigenous communities. In 2013, the two countries signed a loans-for-oil deal granting $2 billion in exchange for guaranteed oil shipments. The Panama Papers release later revealed extensive corruption in those deals.

As the price of oil has dropped, the need for oil to repay these loans has increased, leading the government to agree to new deals with Chinese companies for drilling alongside the pristine Amazon rainforest of Yasuni National Park. Drilling in the park— home to the Waorani indigenous people and two nomadic clans, the Tagaeri and Taromenane, who live in voluntary isolation— currently produces over 200,000 barrels a day that is shipped to the U.S., according to a recent study by Amazon Watch.

This frenzied push for natural resource extraction appears to motivate the Correa administration's to roll back civil society and indigenous peoples’ rights and their unwillingness to engage constructively with criticism of his policies. The effort to shutter Acción Ecológica, the heavily militarized response to Shuar protests, and the attempts to criminalize and defame the Shuar and the Kichwa of Sarayaku are chillingly illustrative of the prioritization of fast profits over environmental protection and indigenous territorial rights.

President Rafael Correa’s last days in office are fast approaching: presidential elections will be held on February 19th, and the new president will take office on May 24th. Correa’s former and current vice presidents are sharing a ticket, and odds point in their favor. As Correa’s successors they are highly unlikely to reverse course on current extractive policies— or, presumably, attacks on civil society that seek to prevent them.

Moira Birss is the Comunications & Media Manager at Amazon Watch. She serves on the board of Other Worlds, and organizes with the D.C. chapter of Showing Up For Racial Justice.