Beyond Rhetoric: “Sanctuary” in Practice

Beyond pronouncements of “sanctuary,” cities and states can protect the immigrant community by guaranteeing legal representation to all—no matter their immigration status. 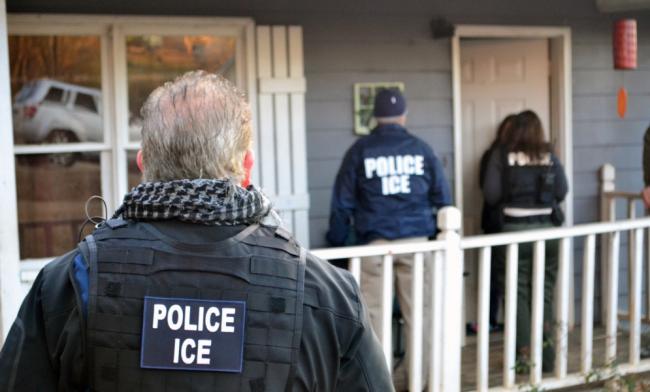 U.S. Immigration and Customs Enforcement (ICE) agents apprehended 680 people over the last week, pointing to the increased role of federal agencies in immigration detention under the Trump administration. While this is still a lower number than the weekly average detained under the Obama administration, it does represent a much larger share of detentions for ICE specifically.

Three recent cases of ICE overreach stand out as examples: Guadalupe García de Rayos, an Arizona mother who had checked in with ICE regularly since 2013 to review her status, arrived for her scheduled meeting last week only to be deported to Mexico. A few days later, ICE agents arrested Daniel Ramirez Medina, a DACA recipient, at his father’s home in Seattle, a sanctuary city. This week, Denver mother Jeanette Vizguerra, took sanctuary in a local church, but was met by armed guards when her lawyer and pastor arrived at the city’s ICE’s office.

The past week’s actions have built off the Trump administration’s January 25 executive orders, which breathed life into the fear that Trump himself has busily stoked since his campaign for president first began in June 2015. His border policing order promises to further militarize the U.S. Southwest and dramatically expand an already-unprecedented immigration detention regime. Similarly, the President’s interior immigration enforcement order further criminalizes immigrants by broadening the priority targets for possible removal from the United States. He has expanded this category to include long-time permanent residents with minor convictions as well as anyone in the country without the federal government’s permission, whether they have been convicted of a crime or not. It also threatens to attack “sanctuary jurisdictions” through the power of the federal purse.

President Trump’s sweeping declaration against sanctuary jurisdictions sits on wobbly legal grounds. Unlike many European countries, U.S. cities and states have legal authority that is independent from the federal government. Neither Congress nor the White House can force cities to do the federal government’s bidding. The Supreme Court said as much in 2012 when it struck down a portion of the Affordable Care Act that required states to expand Medicaid eligibility under threat of withholding federal funds. No one knows just how far the Trump administration can go with its threats to cut off funding to cities that resist its immigration policing plans. But courts will be the final arbiters, just as they are designed to be.

Legal limits to the president’s authority aside, President Trump does have broad latitude to redirect the federal government’s immigration enforcement resources. With two flicks of a pen, the president set the country on course to ramp up the immense level of immigration detention and deportation witnessed over the previous eight years. And in recent days, we have already seen clear signs that ICE is ready to spring into action.

Under President Obama, most people placed into the immigration detention and deportation pipeline were arrested by local law enforcement agencies who collaborated with ICE to identify targets. About 950 of the 1,250 people taken into ICE custody in a typical week between 2008 and 2016 were arrested by local police and sheriffs’ departments or through automated information-sharing initiatives that track people who have encountered the criminal justice system, according to an analysis of apprehension data by the Transactional Records Access Clearinghouse.

ICE agents themselves generally apprehended about 300 people per week during this same eight-year period. Last week’s number of 680 detentions thus represents a substantial uptick in ICE’s usual weekly rate. What’s more, the most recent raids have paired ICE home visits with a willingness to arrest any and all potentially removable people who happened to be present at the time of ICE arrests. There is no reason to expect that ICE’s actions of the last week will be an anomaly under the new Trump administration.

As the Department of Homeland Security (DHS) adjusts to life under President Trump, states and localities have reiterated their support for immigrant communities and refusal to cooperate with ICE. Within hours of President Trump’s executive orders in January, Denver Mayor Michael Hancock declared that his city “will not support taking unlawful or unconstitutional actions on behalf of our federal law enforcement.” He added, “I will remain steadfast in doing everything I can to protect our people – immigrants or not – and protect their rights.”

Boston Mayor Martin Walsh went even further in his statement against the order. “We will do everything lawful in our powerful to protect you,” Walsh told immigrants in the city. “If necessary, we will use City Hall itself to shelter and protect anyone targeted unjustly. They can use my office; they can use any office in this building.”

Since these statements, President Trump has renewed his promise to cut federal funding to cities or states that limit cooperation with ICE, while congressional Republicans have joined his efforts to scare away resistance. A Republican-sponsored bill, currently pending in the U.S. House of Representatives, threatens universities’ federal funding if they allow unauthorized migrants to pay in-state tuition rates. Republican legislators in states such as Colorado, Iowa, and Texas are taking similar approaches to local resistance efforts.

Can state and local leaders like Mayors Hancock and Walsh, who have expressed commitments to making their jurisdictions sanctuaries, put their money where their mouth is? If so, what form will their protection take?

As Elliott Young recently described in NACLA, there is no legal definition for a “sanctuary city.” It is a loosely-used term that traditionally harkens to church-based defiance of laws that violate moral duties. Religious communities have revived the tradition of using their moral authority to defend some of the most vulnerable among us. That moral grounding makes sanctuary declarations powerful statements of intent. They signal that all members of a community are valued regardless of citizenship or immigration status.

And yet, as Young describes, we have already seen ICE agents show up to courthouses in sanctuary cities like Portland to arrest people trying to comply with state judicial proceedings. Such actions, as Young wrote, threaten to turn “sanctuary” into “a meaningless designation that makes us feel good while leaving immigrants hanging in the wind.”

Despite the lack of a clear legal definition, local governments can turn pro-sanctuary rhetoric into policy. It is not enough to say that a city will not violate the Constitution, as Denver’s mayor offered. Every elected official should aim to comply with the Constitution and other laws. This much is a foundational tenet of our country’s democratic tradition. It is an expectation of public service, not an achievement to tout.

But if local elected officials want to protect their immigrant residents from President Trump’s heavy-handed policing plans, there is much more legally available in city arsenals than simply complying with the Constitution.

Instead of empty pronouncements, cities can take steps to make sanctuary declarations meaningful in practice. They can, for example, adopt laws limiting circumstances in which they ask for immigration status to those in which it is required by some other provision of law.

City leaders could make it clear to their employees that anyone who makes that decision will not face employment consequences. If the Trump administration objects, city leaders who truly believe that immigrants help make their communities vibrant urban centers should stand by their principles and show the White House to the courtroom door.

At the same time, local elected officials can ensure that no immigrant member of their community must enter an immigration courthouse without legal assistance. Before the number of people caught up in the immigration detention and deportation pipeline grows, cities could immediately agree to create an immigrant legal defense fund. Currently there is no federal right to government-funded attorneys in immigration proceedings. This is an enormous moral failing embedded into existing immigration law.

But cities can correct this moral shortcoming without opening themselves up to any legal trouble. Cities and states already employ attorneys to represent their residents. In the criminal context, government-funded legal counsel is the norm. It’s time for elected officials to expand access to counsel to immigration cases. Cities could partner with state public defenders’ offices or use their own municipal public defender corps, where those exist, to add lawyers who are ready to go into immigration courts alongside city residents.

New York City pioneered government-funded immigration legal services in 2013. Initial results from New York show the power of locally-funded immigration defense: while immigrants in New York don’t always win, they are now guaranteed the right to navigate the complex immigration court system guided by a skilled advocate. In the program’s first year, almost half of clients were able to get out of immigration detention and continue with their lives while their cases proceeded. In contrast, only 23 percent of unrepresented detainees were able to escape detention. While in many cases, attorneys advised their clients that their best bet was to accept removal, provision of a lawyer saves the city money, and saves migrants the ordeal of prolonged detention or being mired in a dead-end legal process. When lawyers identified a legal claim, they won approximately two-thirds of cases.

These are meaningful results that can be replicated. To be sure, it took enormous political will to piece together funding in New York. State and local officials teamed up with academics, judges, and private foundations that were concerned about the woeful state of access to counsel. But political will leveraged on behalf of migrants isn’t limited to New York. Indeed, in their own forms Austin and Washington, D.C., two much smaller cities, have recently followed New York’s lead. Others can do so as well, especially if elected officials open governmental funding sources and leverage their influence to tap deep-pocketed private donors in order to ensure immigration lawyers stand alongside city residents—no matter their status. Indeed, cities are free to expand public legal services as they deem fit.

No city will ever be able to guarantee complete safe harbor from federal immigration policing efforts. But city leaders can guarantee that, if ICE comes knocking, their immigrant residents will be armed with the most valuable tool in a democracy’s arsenal—access to the law—even if that means cities pick up the tab.

César Cuauhtémoc García Hernández is an assistant professor of law at the University of Denver and publisher of crimmigration.com.