The Left Prevails in Ecuador 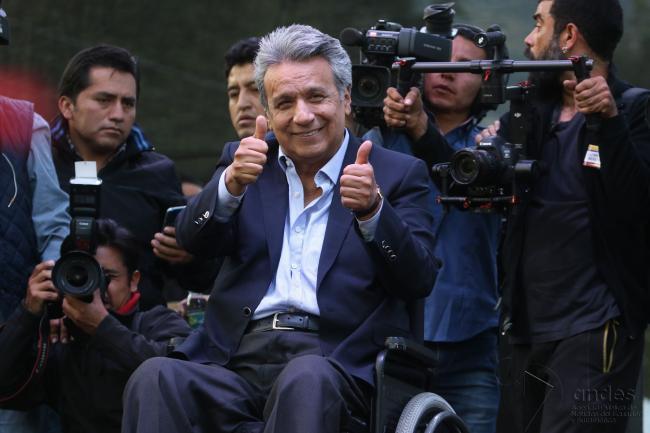 Lenín Moreno, the wheelchair-bound motivational speaker and former Vice President of Ecuador (2007-2013), won Ecuador’s presidential run-off election last Monday with 51.2 percent of the vote. For a while, it looked like his neoliberal opponent Guillermo Lasso would win. But in the last few weeks of the campaign, polls began to shift after the Allianza País party revealed that Lasso had benefited from Ecuador’s 1999 financial crisis and still hides millions of dollars in tax havens. Polls showed a turnaround in the last few weeks of the campaign, from Lasso leading by a few points, to Moreno pulling ahead to win the election.

However, despite the relatively decent advantage of 2.3 percentage points, or about 200,000 out of 10 million votes cast, after the election was called, Guillermo Lasso claimed that the official results are fraudulent and that a recount of about 600,000 votes should take place. Although Alianza Pais denied the claims, they agreed to a recount of these votes. The evidence that Lasso has shown of possible fraud has been very slim, such as missing signatures on vote-tally forms and corrections in the vote count of voting centers. The recount of the voting centers that are being challenged should be ready well before May 24, when the new president is to be sworn into office.

To some analysts, it is surprising that Moreno, who has promised to continue the policies of his popular predecessor, Rafael Correa, did not win more decisively. Despite impressive economic growth and the passage of a pro-indigenous Constitution under Rafael Correa, in recent years his leadership has antagonized some of the most important social movement bases that had brought him to power, leading some movement leaders to publicly refuse to support Moreno. Additionally, in recent months, a number of corruption scandals have also discredited Correa and his party. Still, Moreno's ultimate win in spite of these factors shows that the Ecuadorian electorate is not ready to shift to the political right, as some of its neighbors have.

Correa’s ten years in office (2007-2017) have been characterized by relative political and economic stability, following an economically and politically turbulent decade (1997–2007), marked with extreme economic and political crises. Under Correa, poverty was reduced by over a third and extreme poverty cut in half. Average annual per capita income grew more than twice as fast during the Correa presidency as it did during the previous 26 years (1.5 percent per year versus 0.6 percent). Also, Correa doubled both social spending and infrastructure investment, according to economic data from the Center for Economic and Policy Research.

While the Ecuadorian government benefited from high commodity prices until around 2014, Correa also weathered two economic downturns during the global financial crisis of 2008-2009, as well as the collapse of oil prices after 2014. Between 2014 and 2016, the Ecuadorian state received practically no oil revenues because its oil is low quality and relatively expensive to produce. This decline in the price of oil combined with a relatively strong U.S. dollar, Ecuador’s currency, meant that Ecuador’s exports, became more expensive relative to similar goods from other countries. In order to pay for its imports, Correa introduced a highly unpopular temporary import tax of up to 45 percent in order to reduce imports. The policy was successful on a macro-economic level, but it hurt many Ecuadorians in their pocketbooks. But Ecuador weathered the storm comparatively well: Unemployment remained relatively low around 5 or 6 percent and even though its debt did grow, Ecuador’s external debt still remains one of the lowest in Latin America.

Politically, the achievements of the Correa presidency have been complicated. Correa antagonized not only the far right, but also many of the most important progressive social movements of Ecuador, especially the indigenous movement and the environmental movement. These movements initially supported Correa when he was first elected in 2006, and lauded the early achievements of his presidency, such as the passage of a new highly progressive constitution in 2008, the first in the world to enshrine the rights of nature under the indigenous principle of “sumac kawsay,” or “good living,” meaning life in harmony with nature, community, and the cosmos. This constitution explicitly enshrines a fundamentally different type of development.

Despite this, the government and social movements have become alienated from one another. Correa saw any criticism of his policies towards the environment or towards indigenous land as a betrayal and as “infantile.” When Correa turned his economic policies towards a greater dependence on mineral extraction, such as when the famous abandonment of the Yasuni-ITT initiative in 2013, indigenous and environmental protests against Correa grew more frequent and more militant. In response, Correa did not hesitate to use state security forces to repress protests. In the end, many of the most important segments of these movements, such as the indigenous party Pachakutik, which had been at the forefront of resisting previous governments, refused to support Lenín Moreno’s candidacy.

Meanwhile, in the area of international politics the Correa government has remained solidly in the anti-imperialist camp of the leftist governments of Latin America. Ecuador joined ALBA, the Bolivarian Alliance for the Peoples of Our Americas, in 2009, alongside Venezuela, Bolivia, and Cuba. He has been outspoken against transnational companies, and pushed several important initiatives, such as an international ban on tax havens and the effort to hold transnational corporations liable for human rights abuses, during his presidency.

Yet the persistence of corruption, the continued influence of an oppositional private mass media, and the economic downturn of 2014-2016 all may have contributed to Moreno’s small margin of victory. Corruption is certainly nothing new in Ecuador and Correa seems to have professionalized many public services, making corruption a less prevalent element in day-to-day interactions with the public administration. However, several cases of high-level corruption have come to light in the past few years, particularly as they involved the Brazilian construction company Odebrecht, which is estimated to have spent at least $33 million in bribes during the Correa presidency. The media have reported numerous high-level corruption cases in Ecuador in the past few years, involving a former minister of oil, Carlos Pareja and a former manager of Petroecuador, Alex Bravo, among many others. Even Correa’s older brother, Fabricio, and his vice-president, Jorge Glas (who will also serve as Vice President under Moreno) have been implicated.

The recent economic downturn and increasing visibility of high-level corruption cases turned away many supporters of Correa, Moreno, and Alianza País. The staunchly anti-Correa and anti-Moreno private mass media highlighted these problems constantly in the news, which helped the opposition immensely in this election campaign. The as-yet unfulfilled promise of supporting community media, which is part of the 2008 Constitution, also worked against facilitating a more diverse media landscape.

Still, despite relatively favorable conditions, Lasso did not win. He ran as a successful businessman who would know how to improve the economy – but his past economic behavior itself ultimately discredited him as a weak candidate for the opposition. Lasso was Minister of the Economy in 1999, following a major banking crisis that forced over a million Ecuadorans to leave the country. As minister, he was at least partly responsible for a policy that allowed banks to purchase bad loans for a fraction of their cost and later receive a 100% government bailout on their loans.  Also, in the last few weeks of the campaign, the Argentine newspaper Pagina12 revealed that Lasso controls far more assets and companies in the offshore tax haven of Panama than was originally assumed. The revelations about Lasso’s Panama dealings and the airing of his activities following the banking crisis almost certainly hurt his candidacy.

What Lenin’s Win Means for Ecuador

First and foremost, Lenín Moreno’s winning of the Ecuadorian presidency means that the country will not be returning to the unbridled neoliberal policies that Argentina and Brazil have newly embraced under new rightist administrations. Instead, Moreno has promised to triple poverty relief, ramp up the construction of public housing, double pensions for the poor, and invest in job creation for 250,000 new jobs. Exactly how all of this would be funded in times of tight budgets he never spelled out. Will he redirect state funds or will he increase taxes on the wealthy?

However, in at least one area Moreno has already signaled that he will be different than his predecessor: he will seek to be far more conciliatory towards his opponents. Hopefully this will mean reversing Correa’s crackdown on social movements, and not a closer relationship with Ecuador’s business class. Internationally, Moreno has already distanced himself from Correa’s confrontational approach towards the U.S. Shortly after the election Moreno singled out the U.S. ambassador to Ecuador for a warm welcome in a meeting with Ecuador’s diplomatic corps and said that he hopes to have a good working relationship with the U.S. Also, even though he said that he would not withdraw asylum for Wikileaks’ Julian Assange, who has been living in Ecuador’s embassy in London for the past five years, he did rebuke Assange for having tweeted a mild joke about Guillermo Lasso. It remains to be seen whether these developments could mean a shift towards the center for the new government.

But perhaps the most important result of Moreno’s election, is that it interrupted the rightward shift in Latin American politics. His election will inspire other progressive movements and parties not to despair amidst the recent right turn in the region. With presidential elections scheduled in Mexico, Chile, Colombia, Brazil, Paraguay, and Venezuela, we could see Moreno’s win provide an opening for a comeback of the left in Latin America in 2018,

Gregory Wilpert is a sociologist and journalist who has written extensively on Latin American politics and society. He currently lives in Quito, Ecuador, and works for The Real News Network.