Critiquing Maduro from the Left

What Chavista theorist Heinz Dieterich can tell us about the current crisis in Venezuela – and what he misses. 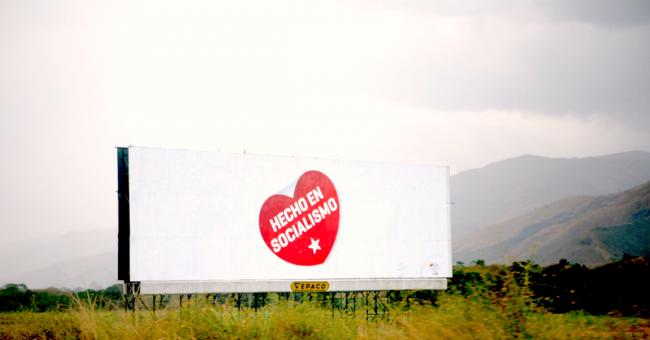 With the intensification of political conflict and economic deterioration in Venezuela, harsh all-encompassing criticism of the government is originating not only from the right side of the political spectrum, but also from the left. Gone are the days when late President Hugo Chávez could boast of having unified the nation’s notoriously fragmented leftist movement, ranging from Trotskyists and Communists to social democrats.

One feature of the anti-Chavista position coming from the left is the “plague on both your houses” argument that condemns both sides – government and opposition – with nearly equal force. University professor Gabriel Hetland appears to defend this line of thinking in a recent NACLA article, though grounding his argument in some of the early achievements of the Chavez government. He ends the piece by citing the slogan that he claims represents the view of the popular classes toward Venezuelan politicians: “Que se vayan todos!” or “Throw them all out!”

Another line of argument – common with regard to nations under socialist rule – is that Maduro’s policies depart from a rational socialist model, which in effect is based on classroom calculations of so-called “cybernetic socialism” divorced from socio-economic and political realities (as discussed below.) A third perspective of the leftist analysts focuses on world power politics that eclipses struggles at the national and grassroots levels.

All three tendencies characterize the thinking of Heinz Dieterich, a long-time Mexican resident and university professor of German descent. As an advisor to Hugo Chávez, Dieterich helped coin the term “twenty-first century socialism,” the title of a book he published in 2005, around the time that the Venezuelan president began calling himself a socialist. The book advocated Latin American integration, while denying that twentieth-century communist governments could serve as an inspiration.

In 2007, Dieterich famously broke with Chávez over his decision to seek reelection and abolish presidential term limits. Dieterich has escalated his criticism under Chávez’s successor Nicolás Maduro, who he calls as “inept and mafioso” as the nation’s opposition.

Dieterich’s attacks on Maduro pass over government decisions with far-reaching implications that Dieterich, as a leftist, should not have overlooked in his analysis. Despite deepening the country’s extractivist model, Maduro has rejected neoliberal-promoted privatization, deregulation and agreements with the IMF as a way out of the current economic crisis. The Venezuelan government has encouraged worker takeovers of factories that cease to produce, such as Clorox and Kimberly-Clark, both of which have left the country. The government has also created neighborhood organizations known as CLAPs that sidetrack private commercial food chains by distributing basic commodities at subsidized prices. (According to CLAP’s national coordinator, nearly two million families benefited from the program last year.) Dieterich harshly criticizes bold policies and actions promoted by Chávez and Maduro – such as worker input in decision making, worker takeover of factories, and community self-governing bodies known as “communes,” calling them “fantasies” and “the road to the abyss.”

The Chavista government’s strengths must be factored into an analysis that also takes into consideration the negatives: corruption, overly-centralized leadership and the government’s failure to devise a viable system to regulate prices for basic goods and currency exchange rates. More recently, the government provoked the opposition by forbidding the electoral participation of governor and former presidential candidate Henrique Capriles for 15 years on allegations of corruption. It has also put off regional electoral contests slated for December 2016; an ongoing delay of elections would certainly cast doubt on the government’s democratic commitment.

These and other criticism of the Maduro government’s shortcomings and errors should not be off-limits for progressives, nor should their seriousness be played down. Elsewhere, I have criticized those on the Left who caution against critical analyses by academics in the North of leftist governments in the global South. But criticisms of the government must be placed in the broader context of the continued, unproductive hostility coming from powerful groups both within and outside Venezuela. The most recent examples of the international campaign waged against the Maduro government include the OAS’s secretary general Luis Almagro’s insistence on the holding of general elections and the threat of Venezuela’s expulsion from the organization. Meanwhile, the U.S. Senate unanimously-passed Resolution 35, urging the Trump administration to hold Venezuelan officials accountable for human rights violations and to work with the OAS to ensure “democratic solutions,” while Mercosur (The Common Market of the South) has refused to allow Venezuela to assume the organization’s rotational presidency.

The violent confrontations in Venezuela of recent weeks are another example of the need to contextualize, and to reject a “plague on both your houses” view. The bellicose behavior of opposition street brigades (as Hetland describes,) including the destruction of public property and the killing and wounding of numerous security forces, would be labeled terrorism in the U.S. and elsewhere. While by no means can we defend extrajudicial abuses, police responses must be seen in the context of this violent behavior by groups belonging to the opposition.

Concurrent with his abandonment of the Chavista camp, Dieterich has embraced a version of leftist thinking that privileges the importance of international power politics, specifically the confrontation between the United States, China and Russia. In 2015, Dieterich wrote “The conquest of the state… as a strategy… to supersede capitalism is today futile, unless it is done in alliance with the world’s superpowers.” As a response to Washington’s recent pushback in Latin America, Dieterich calls on China to implement a sort of Marshal Plan that would be conditional on the Chavista military’s dumping of Maduro and the adoption of a “scientifically-based, political-economic program of national salvation.” Dieterich’s China proposal to prop up progressive Latin American governments by injecting massive sums of money would, in his view, safeguard that nation’s “legitimate economic” and “geostrategic interests” in the face of U.S. efforts to undermine them. At the same time, China would be “serving the people of Latin America and humanity in general.” Dieterich sees the proposal as a win-win situation.

The one missing element in this quasi-Marxist strategy for achieving socialism is social mobilization based on class conflict. Dieterich’s sense of realism translates into a preference for power politics and decisions originating from above. He thus ignores the fundamental principal of the inevitability of class struggle that Marx and Engels laid out in the Communist Manifesto. In the case of Venezuela, the role of the Chavista rank and file in both defending the government and shaping policy cannot be left out of any analysis of the Chávez and Maduro administrations.

There is an element of truth in Dieterich’s assertion that China and Russia favor the economic and political interests of progressive Latin American governments over those of the U.S. and could be natural allies, although their political and economic systems – not to mention human rights records – are nothing to emulate. Certainly China and Russia have not pressured nations into adopting neoliberal policies, as has Washington and the IMF. Furthermore, outside of their border areas which they consider to be vital to their national security, Russia and China do not display military might throughout the world in opposition to governments considered “unfriendly,” as is the case of the United States. By focusing on the realpolitik of potential world powers, however, Dieterich overlooks the transformations that progressive Latin American nations like Venezuela have initiated.

Dieterich’s primary economic theory, laid out in Socialism of the Twenty-First Century, advocates cybernetics-style, or computer-based, socialism to replace the market economy. Dieterich argues that only computers can systematically determine the real value of labor as defined by Marx (value is loosely defined as work hours). This calculation is necessary in order to establish a relationship between the purchasing power of a worker’s salary and his/her working hours, and to set prices on the basis of a product’s real value.

Dieterich states that prior to the era of computers, socialist governments were doomed to fail because making these calculations was literally impossible. The theory smacks of “technological determinism,” namely the notion that technological developments determine historical change. This reasoning is another example of how Dieterich underestimates, if not ignores, the fundamental role of popular struggle in bringing about change.

The real struggle for socialism is a much more complicated process. In developing nations, one of the major challenges is the informal economy – in Venezuela, over 50% of the workforce works informally. How can progressives mobilize and unite this sector? Dieterich’s computer-based scheme is unlikely to serve as a rallying cry for these workers, particularly because applying it to the informal economy is hardly feasible.

In accordance with his computer-based model for socialism, Dieterich sees the middle class as replacing the working class as the key agent in favor of “the model of anti-capitalism and liberation of humanity proposed by Marx, Engels, Lenin, Mao, Ho and Fidel.”

Dieterich argues that the cybernetic system will render the market economy unnecessary and obsolete, but until that time it is a reality. He applies this dictum to Venezuela by arguing that the government’s price and currency exchange controls should be lifted in order to allow for market freedoms. Such a proposal ignores external machinations that have threatened to destabilize Venezuela from the outside – the economic war being waged against the Chavista government. Without currency controls, business interests will be in a better position to buy dollars and send them abroad in order to speculate and destabilize. Regardless of their motivation, the outflow would deplete Venezuela’s already reduced foreign-exchange reserves.

Dieterich is often criticized for his caustic and aggressive style and name-calling used against leftists he disagrees with. In employing this language, Dieterich loses sight of the fact that the democratic road to socialism is complex and the problems that arise lack simple solutions.

Beyond style, Dieterich’s failure to highlight the inevitability of conflict between powerful economic groups and the popular sectors is a major shortcoming in his analysis. Popular organization and grassroots movements have been essential elements in all revolutions throughout history, but even more so in the case of the democratic road to socialism. Dieterich ignores this fundamental principal and instead comes up with simple solutions – some derived from computers – for complex issues in the achievement of national liberation and socialism.

Dieterich’s “plague on both your houses” approach to the Venezuelan conflict fails to recognize the complexity of the challenges the Maduro government faces. In this sense, a distinction needs to be made between two positions. One is critical support for the Chavista government that in no way underestimates its errors. The other is what Dieterich does: placing opposition and Chavista leaders in the same sack.

The latter line of reason is largely incompatible with international solidarity work, which defends Venezuelan sovereignty and presupposes that the Venezuelan government is worth defending.

Steve Ellner is currently coordinating an issue on the class policies of progressive Latin American governments for Latin American Perspectives, a journal for which he is a participating editor. His “Implications of Marxist State Theories and How They Play Out in Venezuela” is slated to appear in the next issue of Historical Materialism.