For the mothers whose children have been disappeared during the drug war in Mexico, there is little to celebrate. 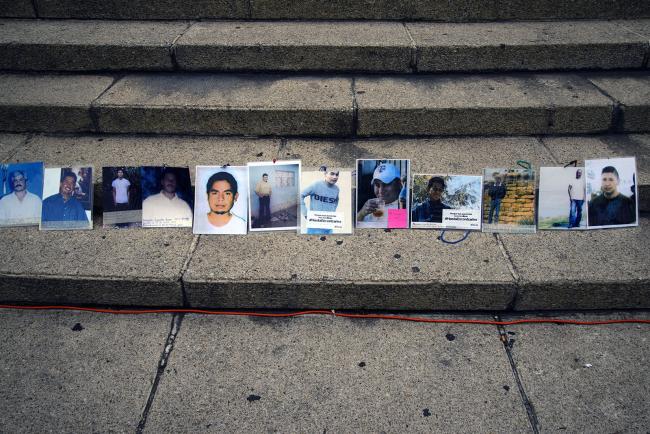 The photographs blanketed the square, a flowerbed of the missing at the foot of the Monumento a la Madre (Monument to the Mother), a towering statue in the heart of Mexico City of a woman embracing her child.

It was Mother’s Day, celebrated on May 10 in Mexico. But for the mothers and families who took to the streets to demand the return of their loved ones, there was nothing to celebrate. Here, at the Monument to the Mother, a song percolated through the crowd – the words lingered, “Aunque sea en una tumba, quiero verte,” (Even if it’s in a tomb, I want to see you).

Gregoria Ortiz Garnica fought back tears and stared at the sun, holding a photo of her son, Gustavo, in her hands. The boy was disappeared in 2007 at the age of 12, on his way home from school, in the city of Pachuca. “We have dedicated ourselves to the task of finding him,” Ortiz said. “But ten years have passed and we haven’t been able to find out what happened.”

Gustavo is one of more than 27,000 people to have disappeared in Mexico since 2006, the year then- President Felipe Calderón declared a “war on drugs” and launched a massive military offensive to take down the drug cartels. Mexico has spent $79 billion on this war, with $2.6 billion in assistance from the U.S. via the Mérida Initiative. The military has taken over civilian policing duties in thousands of communities, unleashing a spiral of violence and impunity. More than 150,000 have been murdered, as splintered cartels fight over territory with increasing brutality.

A decade on, many of the missing are feared dead, and finding them will be a huge undertaking. The government says 855 mass graves — containing 1,548 bodies — have been found in the country since 2007 – just a sliver of the total 27,000 registered disappearances. Less than half of these have been identified. The country’s own human rights body warns there may be as many as 1,143 clandestine mass graves in Mexico today. In a 2013 report, Human Rights Watch documented 249 cases of enforced disappearances. In more than half of the cases, state agents participated in the abductions, either acting on their own or collaborating with criminal groups, according to the report. All branches of Mexico’s security forces appeared implicated. The 2014 disappearance of 43 students from Ayotzinapa teacher’s college in Guerrero, remains one of the most symbolic cases of enforced disappearance to have shaken Mexico. The case remains unsolved.

By the time Mother’s Day wound down, the death toll would grow to include Miriam Elizabeth Rodriguez, a mother and activist who had organized 600 families to search for mass graves in the state of Tamaulipas. Her fourteen-year-old daughter, Karen, was abducted in 2012. Rodriguez, through her own work, found her daughter’s remains in a mass grave. In April, she reported to the human rights commission in Tamaulipas that she had received death threats, and asked federal officials to protect her. Yet on the night of Mother’s Day, in the municipality of San Fernando, gunmen broke into her home, where they shot her 12 times. Officials say she died on the way to the hospital — like Marisela Escobedo and Nepomuceno Moreno before her, killed for searching for the missing.

Commenting on the spiralling violence, Luis Prados, an editor at El País, writes: “Investigations are opened, of course, but everything leads to a choreography of failure. No one is responsible, no one is arrested, suspended, fired, or investigated.” 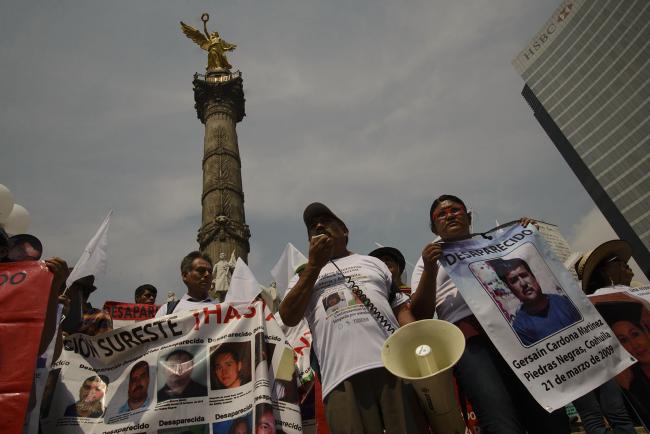 “This violence that is so systematic and so persistent and multifaceted has only one purpose: to control us through fear,” said Dominican friar José Raúl Vera López, bishop of Saltillo, who marched in full religious attire on Mother’s Day. His pastoral work in the state of Coahuila includes supporting the search collectives, as well as accompanying the families in their investigations and dealings with government officials. “This is what the mothers of Mexico are facing, as they search for their daughters and sons and husbands.”

He credits the families and their tireless organizing with pressuring the government, most recently on a bill, just approved by the Senate, that calls for longer prison sentences for perpetrators of enforced disappearances and a national system to search for missing persons. The bill, which now has to be approved in the Congress, differentiates between two types of disappearances. The first refers to situations where state officials are implicated in the disappearance, while the second refers to abductions carried out without official involvement – usually by organized crime. Repeatedly, human rights advocates have called on Mexico to search for the missing, as well as to identify all of those found in clandestine graves, and to protect those doing the searching. 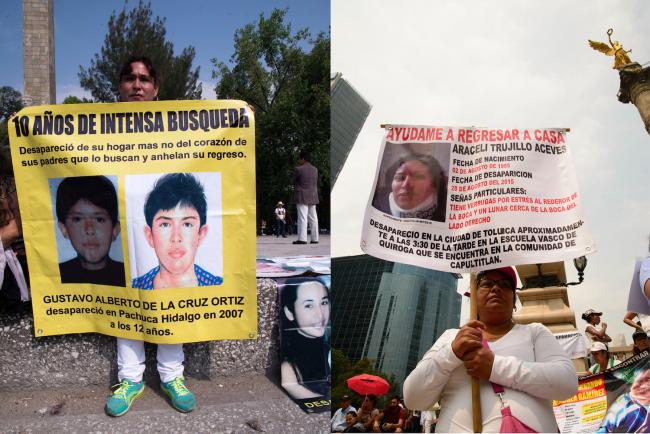 “What really disappoints me about the authorities is that you go to ask for support and instead of doing that they minimize your case,” said Virginia Aceves González, whose daughter, Araceli Trujillo, disappeared in 2015, leaving three children behind. Araceli went missing after working her shift at a restaurant, in the city of Toluca, in the state of Mexico. Araceli disappeared on a Friday, but authorities would not let her family file a report till Tuesday, because of a long weekend.

“The answer that I had was not to worry, because she had taken off for fun, and that when the money ran out, she would come back,” Aceves recalled. “My answer was that if my daughter had been a girl of around 15 to 20, I would believe it, but she had three kids, she had responsibilities, I didn’t think she would just take off like that, just to party.”

Faced with government indifference, the families of the missing do most of the looking. They take on the searches, the costs and the risks. Across Mexico, they keep finding mass graves. In April, volunteers and officials started exhuming 458 bodies from the mass graves of the state of Coahuila. A month earlier, the Attorney General of the state of Veracruz recognized the families’ work in finding a huge grave that contained as many as 253 bodies, a site the locals called the “pool,” because of its size. That grave is only one of 80 secret burial sites found in that state so far.

“The families have had to become investigators, forensic experts, mass grave trackers, and even lawyers,” said Araceli Salcedo Jimenez, whose 21-year-old daughter, Fernanda, disappeared in 2012. “All of this to make up for government deficiencies and the unwillingness to face this problem.”

On Mothers’ Day, many of the mothers I spoke with said government figures grossly underestimate the number of people missing across the country, that what’s been found so far is just a trickle. Sara Hernández, who looks for a missing son and belongs to a mothers’ collective in Querétaro, believes many people are reluctant to file reports for fear of reprisal from organized crime and officials in collusion with them.

“Every day, there are more and more like us,” Hernández said. “Every day, we are mothers missing a son or missing a daughter. Today we would like to hold them. We would like to kiss them, tell them that we love them, that we are looking for them, and that we will not stop until we find them.”

Her son left small children that she now helps to care for. Explaining what happened to the children’s father, she said, has been especially trying.

“At first, we didn’t want to tell them, we would tell them he had gone to work, but once they saw the breaking of the family, the search, we had to tell them the truth,” Hernández said. “Eventually we told them that he was lost, that he had been taken, and that we were looking for him and would do everything we could to bring him back. And obviously they suffer his absence every single day.”

As the march was winding down, a troupe of dancers performed a piece on memory. “What is a body when it disappears?” one asked. A few steps away, Álvaro Alcántara Legorreta handed out flyers with the details of his missing sister, a nine-year-old who disappeared in the municipality of Tezoyuca, in the state of Mexico, in 2014. 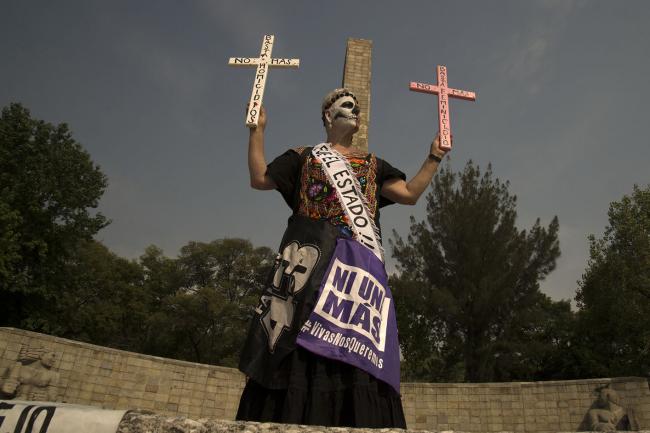 “My mom sent her to get tortillas and she never came back,” Alcántara said. “It’s been difficult, for my parents, for all of us. We miss her every day.”

Gustavo Alberto de la Cruz, who has been gone for a decade now, would turn 22 this year.

His mother, Gregoria, thinks of him every day. She wants him to know that she is looking for him, that she, too, will not stop until she finds him. “When I think of him,” she said, “I think of him married, with children, and that one day he is going to return.”

Sara Hernández — whose son, Juan González Hernández, disappeared in 2006 — stood with her hands shaking, the city’s iconic Ángel de la Independencia above her, the resilience in her voice an electric current.

Federico Barahona is a Québec-based writer, translator, and photographer, as well as associate editor at SNEEZE Magazine. Follow him on Twitter @federbarahona.