Three cofounders of the Lehman College DREAM Team in New York City on the past, present, and future of undocumented youth organizing. 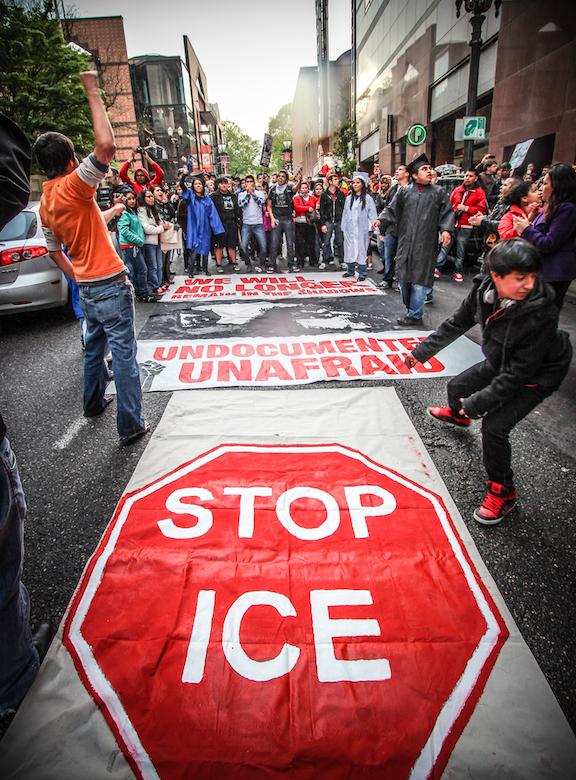 Luis Saavedra, Melissa García Vélez, and Marlen Fernández were among the cofounders of the Lehman College DREAM Team, the first official group organized by and specifically for undocumented students at the City University of New York (CUNY). From their first semester on campus, until they graduated in 2014, Luis, Melissa, and Marlen worked tirelessly on campus, around the city, regionally, and at the federal level, demanding better services for undocumented students at the college and throughout the CUNY system, while also helping college and high school students mobilize on their own campuses. They engaged with national activist groups and debates, and remained centrally involved in the New York State Young Leadership Council (NYSYLC), an organization Melissa had joined between high school and college. The three students consider themselves part of the “undocumented, unafraid, and unapologetic” movement, and, along with many other undocumented youth, they “came out of the shadows” to declare their immigration status as they became active in the immigrant youth organizing movement.

In recent years, they have been on the frontlines in key moments of immigration activism: Melissa was in the Senate chambers in Washington, D.C., when in 2010, the federal DREAM Act failed to receive enough votes to pass. Shortly afterwards, Marlen and Luis participated in a 150-mile walk, from New York City to the state capitol Albany, on behalf of the New York State DREAM Act. Although both the federal and statewide efforts ultimately failed, President Barack Obama’s signing of the Deferred Action for Childhood Arrivals (DACA) executive order granted work authorization, driver’s licenses, and protection from deportation to some of those who came to the U.S. as children. Today, hope for continued protection hangs in the balance under the Trump administration.

To be sure, the Obama presidency was hardly a paradise for undocumented youth activists. Some immigrant rights groups referred to Barack Obama as “Deporter-in-Chief,” because his administration deported more people than any other previous sitting president. But the transition from Obama to Trump was bitter for many immigration activists for whom things can perhaps be seen as going from bad to worse. In this interview, Alyshia Gálvez, the founding faculty advisor with the Lehman DREAM team, discusses with Melissa, Marlen, and Luis, the state of the immigrant rights movement in the U.S. in the current moment of anxiety and uncertainty—and the challenges and successes youth organizers have faced since they first met seven years ago.

LUIS SAAVEDRA (LS): Much like the Trump White House’s wishful deconstruction of the “administrative state,” immigration reform is dead on arrival.

MARLEN FERNÁNDEZ (MF): It is now a long-lost dream. Under this administration, and the effects that this administration will leave behind as part of its legacy, undocumented people will never be able to have immigration relief that will put them on the path to citizenship. If things were to change in the next 20 to 50 years, immigration relief would be too late for many working families who have already been here for over 20 years and are now growing old. Many of their children will also be middle-aged adults.

Communities are in a decisive moment. We can either stay with the hopes that immigration reform is going to come out of the “goodness” of our current politicians—or continue the radical work that undocumented immigrants have cultivated to push beyond temporary forms of relief to achieve full citizenship.

AG: What shape could immigration reform take today, if it is at all feasible?

LS: At the federal level, draconian deportation policies are a product of the discourse and dialogue of immigration reform. Enforcement and militarization of the border have been presented as a sound policy precursor to any pathway to citizenship. Yet time and again, it has led to programs such as Secure Communities [a federal policy that relies on the partnership of local law enforcement and ICE to identify and detain undocumented immigrants for potential deportation] and strict vetting of immigrants; and of course, the deportation of millions.

MGV: Immigration reform has to be something that goes beyond citizenship for the 11 million undocumented immigrants currently living in the U.S. It has to include a shift in how we tell the history and herstory of this nation. It has to include wide, deep, and truthful conversations about capitalism, racism, sexism, xenophobia, homophobia, Islamophobia, and U.S. imperialism, about how the policies of this nation have contributed to the current refugee crisis, about the push and pull factors that force migration. It must include conversations and action steps regarding how we are going to end mass in carceration and abolish the prison-industrial complex. It has to re-imagine a world without borders and a new criminal justice system. It has to challenge all of us to envision and work towards that world.

If we don’t challenge ourselves, our communities, our leaders, and our politicians to include these elements when we speak about immigration, we will find ourselves with the same issues ten years from now. Immigration reform to me now is not just about acquiring a certificate of citizenship, it is about how we are going to, collectively and radically, change this violent, inhumane system that has been destroying communities across the world. It is about how are going to end the cruel separation of families, and how are we going to continue to envision, believe in, and achieve a world where each person can have access to all basic needs. We see every day that having U.S. citizenship does not always guarantee justice, a roof over your head, or a meal on your table. Thus, we have to continue pushing the envelope in terms of what a real, humane, and dignified immigration reform looks like in this country—and how can it be made to serve as a model for other countries. Immigration reform to me looks like a true, radical liberation of all our people, unafraid and unapologetic.

MF: If there were to be some type of relief during this administration, those who have DACA would be the first in the line of undocumented folks to qualify and benefit. Such measures will continue to divide the undocumented community into “deserving” and “undeserving” immigrants, while at the same time deporting many innocent people and fueling the separation of families. One aspect that remains clear is that undocumented immigrants will not be offered a path to citizenship. Rather, at most we have a weak promise to not end the DACA program. Undocumented people will always be wanted for their labor but never to fully integrate into American society, and to benefit from the public goods that they pay into, such as health insurance, social security, and other benefits.

LS: The deconstruction of the “administrative deportation regime” starts at the local level. The New York State Youth Leadership Council (NYSYLC) has beautifully highlighted that community networks allow for self-agency and empowerment. A self-agency that led to dreaming of state financial assistance, healthcare, work authorization, and state identification for undocumented students—the New York State DREAM Act, in essence. The road to immigration reform at the federal level must start with the enshrinement of the needs of the undocumented community within local and state institutions. What does that mean? It means non-compliance with Secure Communities, state financial aid for undocumented students, driver’s licenses for all, etc. Communities must be protected by local structures that make it inhospitable for deportation and enforcement policies on arrival.