How Not to Assemble a Country

In El Salvador, the legacies of violence persist and intensify. 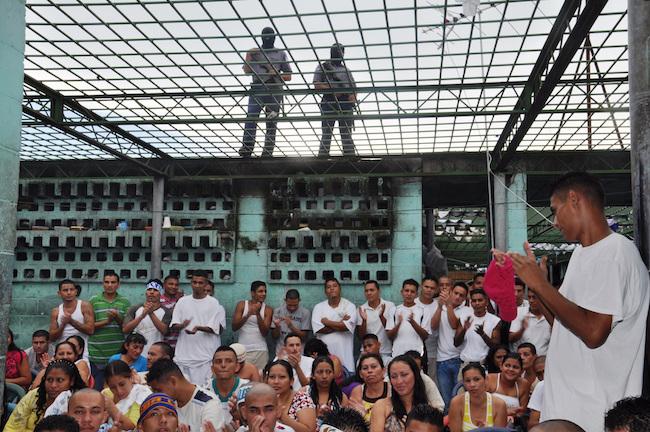 Although it seems rather absurd, at the end of 2016, Salvadoran authorities—including the president of the country and the director of the national police—declared the year a success in terms of security.

El Salvador is the smallest country in Central America. Its national territory would fit inside California 20 times over, and it’s inhabited—border to border—by just under 6.5 million people.

In 2016, El Salvador had the highest homicide rate in the world: 81 murders for every 100,000 people, for a total of 5,278 murders. To put this in perspective, the World Health Organization has a rule saying that if a country’s murder rate rises above 10 homicides for every 100,000 inhabitants, then that country is suffering from an “epidemic.” The Salvadoran death epidemic is eight times that threshold.

Another statistic to put El Salvador’s alarming numbers in perspective: it was considered a scandal when Mexico’s homicide rate—where drug trafficking and kingpins like Joaquín “El Chapo” Gúzman dominate headlines around the world—reached approximately 18 murders for every 100,000 inhabitants in 2016. El Salvador has experienced double that rate, even in its best year this century.

Nevertheless, authorities gave various press conferences at the beginning of 2017 to celebrate the 2016 numbers. Why? Because 2015 was even worse—and because many of these authorities are cynics, having the gall to applaud themselves.

In 2015, we were killing ourselves at a record-setting rate for the Americas: 103 homicides per 100,000 inhabitants.One in every 972 Salvadorans was murdered. As a point of comparison, that same year, the rate in the United States was five murders for every 100,000 people.

Let’s do the math. For the United States to have equaled the Salvadoran homicide rate during the two-year period running from 2015 through 2016, 593,000 murders would have needed to have occurred.

Twenty-five years after the signing of the Peace Accords that ended a violent 12-year civil war, which left at least 75,000 dead and countless more disappeared and displaced, El Salvador seems to be enveloped in another war. In short, El Salvador has become a clear example of how the end of war does not necessarily mean the start of peace.

The symptoms that remind us of that prolonged nightmare are not solely comprised of bodies. Every year, more people from this very small country decide to flee to save their own lives. What has been happening in Mexico since 2013 is a clear example. More than 90 percent of the petitions for refugee status received by Mexico between 2014 and 2015 came from citizens of the two most violent countries in Central America: El Salvador and Honduras.

In 2013, 1,296 people applied for refugee status in Mexico. The following year, in 2014, there were 2,137 such applications. The next year, 3,424. Between 2015 and 2016, applications more than doubled; that is, 8,781 people asked Mexico to save them from death. According to the United Nations, at this rate up to 20,000 people could apply for asylum in Mexico in 2017. Many Salvadorans have come to understand that the only way to stay alive is to rescue themselves, without help from any kind of authority in their own country. When you ask Salvadoran refugees in the south of Mexico why they don’t denounce the authorities in their home country, the most common response is a mocking grin, a symbol of just how absurd the question is.

How did it come to this? How has this epidemic of death become so contagious? How is it possible to learn so little from the past?

In many ways, El Salvador seems to be a sort of manual on how not to assemble a country. The persistence of repression is one of the primary features of this manual. Repression at the center of the security strategy. The unchallenged idea that violence can be solved with bullets.

The year 2003 was a watershed year for the country. That July, ex-president Francisco Flores, of the Alianza Republicana Nacionalista (Nationalist Republican Alliance, ARENA), the country’s leading right-wing party, put on a spectacle in a community dominated by El Salvador’s gangs. Flores stood in front of a mural dedicated to a member of the gang Barrio 18, who had been killed by members of a rival gang, Mara Salvatrucha. There, Flores launched the plan that he promised would put an end to these criminal organizations. He called the plan “Mano Dura,” roughly, “Iron Fist” in English.

The plan was not a plan at all, though. It was, rather, a public relations strategy. The central idea of this strategy was to arrest and imprison any young person who “looked like a gang member.” Judges, who could not convict people for simply looking like gang members, ended up freeing within 72 hours most of the young men who were detained under the plan. The police rounded up gang members, young rockers, and hippies. Many young people who were not in gangs suffered police harassment simply for living in a community dominated by gangs or for wearing an earring or loose-fitting pants. Some older gang members who lived through those years remember that many children and adolescents actually decided to join gangs during that period. The logic behind this decision seemed simple enough: if the authorities were going to harass them when they neither belonged to a gang nor enjoyed the benefits of its membership, better to join and get those benefits.

The damage of Mano Dura quickly revealed itself in the numbers. In 2003, the homicide rate was recorded to be the second lowest that century for El Salvador: 36.6. In 2004, after the Mano Dura policy was initiated, the murder rate began to climb, creeping up to 48.7.

But then El Salvador became illustrative of other key elements in the manual on how not to assemble a country: the inability of a country to learn from its own past and the cowardice of leaders, who give preference to votes instead of lives. In June of 2004, another ARENA politician, Elías Antonio Saca, assumed the presidency. In August of that year, despite the rising death rate, he launched his own anti-crime plan, giving it a very unoriginal name: Plan Super Mano Dura (Plan Super Iron First).

The plan represented more of the same. In 2005, El Salvador ended the year with a homicide rate of 63. And in 2009, when Saca handed power to the opposition party, the Frente Farabundo Martí para la Liberación Nacional (Farabundo Martí National Liberation Front, FMLN) El Salvador had ascended to the top of a very undesirable podium, becoming the most violent country on earth not currently engaged in an official war. With 71 homicides per 100,000 we were the deadliest “peacetime” country on the planet.