To "Afflict the Comfortable" 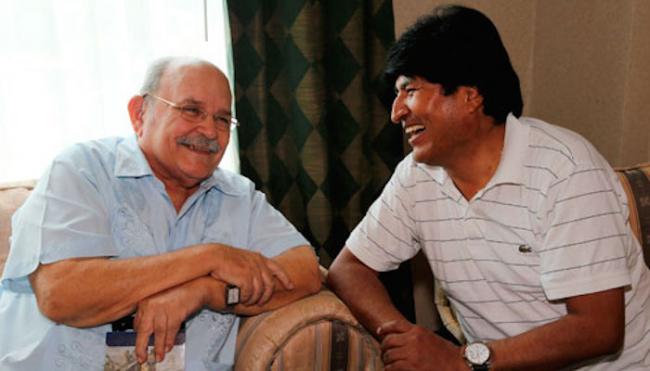 During his decades as a public figure, Miguel d’Escoto Brockmann— Nicaraguan politician, priest, and former president of the United Nations General Assembly— managed to escape much of the international notoriety visited upon his Sandinista comrades. But from the beginning of his political life to his death earlier this month, he was never far from the struggle.

D’Escoto, who died on June 8 from apparent stroke complications, was a lifelong proponent of a radical politics that once seemed to promise restoration for a battered and disoriented international left. He led a tripartite life—as a revolutionary, a priest, and a public servant—during a period of profound change in his home country, when an insurgent egalitarianism swept through popular consciousness to saturate both secular and Catholic worldviews.

Throughout the 1980s, grassroots movements pushed the struggle over the Catholic Church’s social mission out of the Vatican and into the glare of the Central American sun. As poor people’s movements in the Global South, particularly Latin America, repeatedly challenged elite power and wealth, some factions of Catholics broke with the Church hierarchy to advance a radically transformed vision of Catholic social doctrine. This reinterpretation of the Church’s obligation to the poor went beyond the historic Catholic commitment to charity to advocate involvement in political struggles—including revolutionary ones. Known in Latin America as “liberation theology,” this tendency also found some adherents in the North American Maryknoll missionary order, which had long included political activism as part of its ministry.

In the 1960s, after much internal debate, the Vatican seemed to legitimate liberation theology, but by 1985 this emergent radicalism had grown militant enough to rattle Church elites. Pope John Paul II retaliated by stripping four Nicaraguan priests of their holy orders. D’Escoto, a Maryknoll priest and Nicaragua’s foreign minister at the time, was one of them.

But it was then-Nicaraguan Minister of Culture Ernesto Cardenal, also defrocked by the pope, who became the international symbol of the Church’s campaign against radical priests, not d’Escoto. An iconic photo that soon circulated the world captured Cardenal kneeling before John Paul II on a dusty Managua tarmac, smirking incredulously as the pope chided him with a single finger.

As for d’Escoto, never in the spotlight but always deeply engaged in the movement: “I was at a ministerial meeting in India at the time” he said of the iconic photo op decades later. It was there, in the solitude of his diplomatic lodgings, that he “wept and wept and wept,” deeply injured by the dismissal of his spiritual calling.

Almost twenty-five years later, in 2009, d’Escoto found himself in the middle of another diplomatic mission when crisis struck again. After Honduran president Manuel Zelaya was deposed by a right-wing coalition supported by the United States, left-wing presidents from around the region gathered in San Salvador to condemn the coup. Zelaya soon boarded a plane for Honduras to reassert his claim to the presidency. But after a tense standoff—as military vehicles blocked the runway, protesters swarmed the airport, and the airplane circled overhead—Zelaya was forced to abort the strategy, instead landing in Managua.

D’Escoto, then the presiding president of the United Nations General Assembly, was one of only two world leaders to accompany Zelaya on the tense flyover. A few days earlier, speaking in English before the UN, d’Escoto condemned the coup, warning that “reactionary forces who have never given a hoot for the growing number of our dispossessed are now alarmed by the remarkably powerful movements that have brought progressive governments to power.”

In the early 1960s, when the freshly ordained Father d’Escoto approached a New York City magazine editor with the idea of starting a publishing house, what would come to be known as “liberation theology” was all-but unknown to English-speaking Catholics. Developed primarily by Latin American clergy, liberation theology proposed that among the Church’s deepest and holiest commitments was its duty to advocate for the poor. A generation of priests and nuns came to see it as their spiritual calling to participate in the struggles against exploitation then shaking political systems around the world.

Orbis Books, the Ossining, New York publishing house d’Escoto founded in 1970, ferried this radical reinterpretation of the Church’s social mission into the North American Catholic mainstream, publishing English translations of works by Gustavo Gutierrez, Ernesto Cardenal, and others. Through Orbis, d’Escoto built an outlet for his militant ministry, developing a political-spiritual practice that, in the words of one of his associates, went beyond simply comforting the afflicted to also “afflict the comfortable.”

But he soon left the comfort of Maryknoll enclaves in North America to participate more directly in political struggles further south. A qualified civil engineer as well as a priest, he spent years building homes for the urban poor, first in Chile during the socialist Salvador Allende administration and later in Managua, after a 1972 earthquake devastated the city and helped bring about a crisis of legitimacy for the dictator Anastasio Somoza.

Sometime in the 1970s, d’Escoto joined the clandestine Sandinista National Liberation Front (Frente Sandinista de Liberación Nacional, FSLN). In 1977, he came forward as a member of “Los Doce,” the cadre of civil society figures who helped legitimate the ascendant revolutionary movement by demanding that FSLN be allowed to participate openly in national politics. Less than three years later, the Sandinistas were in power, and d’Escoto was helping to determine the course of the revolution as Nicaragua’s foreign minister.

Despite being known as a bookish type, enamored with blueprints and old bibles, d’Escoto proved a relentless public servant, conducting himself with the passion of a fire-and-brimstone preacher and the tenaciousness of a professional revolutionary. The pope’s revocation of his priesthood in 1985 did nothing to moderate his politics; if John Paul had hoped to gag d’Escoto, his plan backfired.

In 1986, motivated by the international community’s cavalier reaction to the U.S invasion of Grenada, d’Escoto overcame the skepticism of his Sandinista collaborators to make a decision that would deliver him perhaps his greatest diplomatic triumph. Disgusted by the U.S’s pattern of abusing poorer nations with impunity, he sought legal redress for the crimes the Reagan administration had committed in Nicaragua throughout the 1980s.

Drawing upon stockpiles of evidence gleaned from diplomatic encounters, he brought charges against the United States to the International Court of Justice at The Hague, alleging that the superpower’s support for the contra insurgency amounted to an illegal intervention in Nicaragua’s domestic affairs.

In an enormous upset, the court ruled in favor of Nicaragua and its young revolutionary government, affirming that the northern superpower had violated Nicaragua’s sovereignty by arming anti-government paramilitaries and mining the nation’s harbors.

Throughout the 1980s, d’Escoto waged a public struggle against the church hierarchy in Nicaragua, embodied by Cardinal Miguel Obando y Bravo,“—the principal accomplice of aggression against our people,” according to d’Escoto—who received political and financial support from domestic elites as well as North American meddlers.

After the FSLN’s electoral defeat in 1990, d’Escoto maintained his political commitment to the Sandinista project, serving for a time as the administrative leader of the network of neighborhood organizations assembled under the umbrella of the “communal movement.” Originally convened as Sandinista Defense Committees (CDS), these neighborhood associations advanced an ambitious program of local self-determination by organizing public works projects and creating local governance structures.Though the CDS had once represented the largest mass movement in the country, after 1990 the movement diminished in size and influence as state support receded.

Throughout its period as the political opposition (1990-2007), the FSLN party hierarchy became steadily more remote from the popular sectors that had once comprised the revolution’s base. During this time, d’Escoto held tight to embattled party leader Daniel Ortega—a strategic orientation that allowed the priest to remain proximate to state power, but unfortunately cast him as an apologist as Ortega jettisoned sections of the party’s historic platform in a bid to win support from the center-right.

Perhaps most uncomfortably, d’Escoto’s proximity to Ortega during this period positioned him as a political ally of his one-time archnemesis, Cardinal Miguel Obando y Bravo, who endorsed Ortega’s candidacy for president in 2006.

As I’ve argued elsewhere, when Daniel Ortega returned to power after a successful reelection campaign in 2007, he presided over a severely compromised FSLN that had sacrificed much of its revolutionary program in pursuit of state power. But for d’Escoto, at least, the alliance with Ortega paid political dividends.

In 2008, d’Escoto was elected president of the General Assembly of the United Nations, where he went about pursuing an ambitious plan for reorganizing the agency in the service of the Global South. Central to this plan was weakening the power of the UN Security Council and overhauling international lending institutions like the International Monetary Fund. Well aware that Global South nations remained severely constrained by the institutional power of the Global North, he took aim at what he saw as the main instruments of military and economic coercion available to countries like the United States. However, though he assembled a team of advisors that included leftist thinkers like Noam Chomsky and Howard Zinn, his plans to kick the legs out from underneath the Bretton Woods institutions ultimately languished without widespread international support.

A less-than-favorable profile in the New Republic took d’Escoto to task for his fiery press briefings, characterizing them as “invective-laced bravura jags.” But many remember him as a principled advocate for downtrodden nations throughout the world, unafraid to seize the floor of aloof international bodies to advance local struggles.

This readiness to repurpose imperial institutions in the service of anti-colonial objectives was on full display in 1986, when he had faced down the United States in international court—and won. He reprised this performance from the floor of the General Assembly in 2008, when he resoundingly condemned Israeli aggression in Gaza, much to the chagrin of the outgoing Bush administration.

Miguel d’Escoto Brockmann, like many of his generation in Latin America, embodied the fruitful link between faith and political practice, deriving from his Catholic piety an enduring commitment to egalitarian politics. As a member of the Sandinista revolutionary cadre, he served as an example to generations of Third World militants. And, in his capacity as the institutionalized revolution’s lead diplomat, he personified the Nicaraguan revolution’s unsettling influence on a world order rooted in the history of imperial control.

In 2014, Pope Francis restored d’Escoto’s holy orders. The man who once wept alone in a hotel room in India, only to appear before the United Nations some twenty-four years later as “an instrument of peace, justice, and solidarity”, was finally vindicated by the Church that had rejected him. He died a hero and a priest.

This article was copublished with Jacobin.

Jonah Walters is a graduate student in geography at Rutgers, the State University of New Jersey. His writing on Nicaragua has appeared in Jacobin and Latin America News Dispatch.