Lawyers and other volunteers have provided assistance to women and child refugees in family detention centers since 2014. Under Trump, uncertainty reigns. 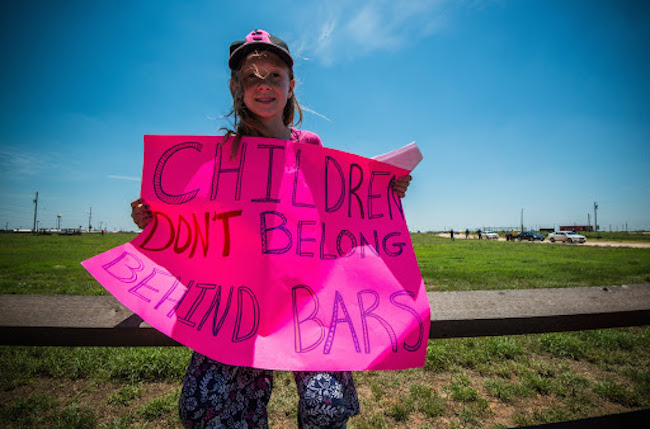 It was 7:30am on a January morning in south Texas, a few days before the U.S. presidential inauguration. The lawyers and translators filed through security screening into the refugee detention center. But as they entered the trailer where they would spend the next ten or twelve hours assisting women asylum seekers and their children, they stopped short. The trailer was different than the day before: the furniture had been totally rearranged. Near the waiting area, there was usually a circle of chairs for the “intake charla,” or briefing, in which new arrivals, still dazed from weeks or months of travel, often wrangling small children on their laps, listened while a volunteer explained the U.S. asylum process. In the back was another cluster of chairs where, several days later, women would receive more detailed instructions about the interview they would face with an asylum officer. In still another circle, those who had passed the interview and received authorization for release were apprised of details about ankle shackles and bond payments. Five and sometimes six days a week, a dozen or so lawyers and legal assistants provided these services to hundreds of women as part of the CARA Family Detention Pro Bono Project, an initiative organized by the Catholic Legal Immigration Network, the American Immigration Council, the Refugee and Immigrant Center for Education and Legal Services, and the American Immigration Lawyers Association. They had developed a fine-tuned procedure over the previous two years, and the furniture was the physical manifestation of that procedure. Now inexplicably the trailer had been totally rearranged.

Did the furniture herald the beginning of the end? In the weeks prior to the inauguration, CARA staff had been on edge, uncertain what would happen after January 20. U.S. laws governing asylum seekers’ rights to counsel are complex and inconsistently applied. While Immigration and Customs Enforcement (ICE) cannot legally block detainees from receiving counsel, they can—and do—obstruct lawyers’ access to them. Was this ICE’s not-so-subtle way of informing CARA it would no longer be permitted to work in the center?

Gracie Willis, Senior Staff Attorney of the CARA project, called frantically around to her contacts at the facility. Finally, an ICE official, let’s call him “Victor” for the purposes of this article, sauntered in. “So,” he announced, “how do you like my feng shui?” Victor stood at one end of the room with his arms crossed, surveying his work. Purposefully mirroring his swaggering stance, Willis took up a position next to him, crossed her arms, and issued her verdict: “I don’t like it at all.” The two went back and forth, discussing the relative advantages and disadvantages of the new arrangement, until finally Victor became bored with the game and ambled out, instructing Willis they could put the furniture back.

Victor’s feng shui, or what he later referred to as his “shock and awe” moment, turned out to be a show. On the eve of Trump’s presidency, he was letting the lawyers know where they stood. His performance rehearsed the forms of arbitrary power that immigration and border officials would exercise with new audacity in the coming months, both inside the detention facility and across the country. Several months later, the legal team continues to work in the detention center. But in the era of Trump, its work there, the policy of incarcerating refugee parents and children, and above all, the fate of the desperate people who continue to cross the border, remain deeply in doubt.

The facility in Dilley, Texas is the largest of three family detention centers. Its official name, the South Texas Family Residential Center (STFRC), obscures what it actually is: a prison for mothers and children who are seeking asylum. But CARA’s presence in “baby jail,” as a fierce group of critics calls it, also provides a model of advocacy as well as resistance. Since the detention center’s opening in December 2014, a group of young staff members and teams of volunteers have provided legal counsel to tens of thousands of people who have cycled through the center. Their work not only impacts the detainees they counsel but reverberates well beyond the center as well.

Today, the policy of family detention is at a crossroads. Under Trump’s sweeping anti-immigrant, antirefugee agenda, it could metastasize, or, for economic and legal reasons, it could just as easily cease to exist. But whether it mushrooms or disappears, CARA suggests one model for responding to the crisis of immigration detention. In the meantime, its staff continues its work in Dilley, in an atmosphere of unprecedented uncertainty and at the mercy of a newly emboldened ICE. The current system of family detention originates from the increase in Central American refugees arriving at the U.S. border in 2014. At that time, large numbers of people, many of them mothers with children as well as unaccompanied minors, began appearing at the southern border, fleeing violence in El Salvador, Guatemala, and Honduras. Almost 70,000 unaccompanied children and another 70,000 family units arrived over the course of 2014.