In Guatemala, A Leftist Colonel Indicts his Own 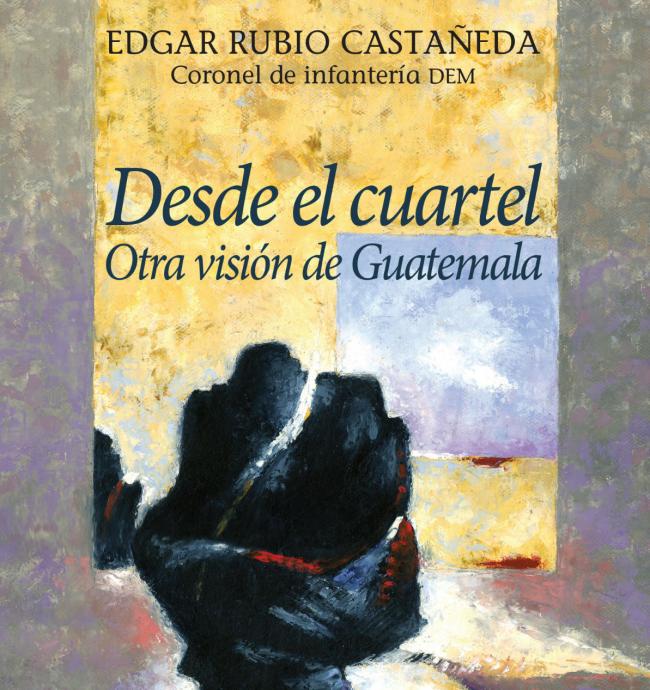 On May 25th, Guatemalan Army’s Court of Honor ordered Colonel Edgar Rubio Castañeda to appear to respond to allegations that he has published libelous and slanderous information about the army in his newly released Desde el Cuartel (From the Barracks, Guatemala: F y G Editores, 2017). There are concerns that he will be relieved of his rank or position in the army and charged with smearing the reputation of fellow officers. But as of today, no formal legal action has been taken against him.

Rubio Castañeda defines himself as an opponent of neoliberal economic and social policies who favors reducing the huge gap between wealthy and poor Guatemalans. Desde el Cuartel is both a historical assessment of how the rich have bought off Guatemalan presidents for the last sixty years and an appeal to future leaders to adopt policies that will give the country back to the people.

Desde el Cuartel contains much that is new. First, it is surprising that an active colonel has written a book critical of the country’s existing political and economic structure.  Rubio Castañeda’s positioning is reminiscent of another Guatemalan colonel, Jacobo Arbenz, who became president in 1950. During his time in office, Arbenz drafted an agrarian reform program to return land that had been taken or acquired by the United Fruit Company from the indigenous population under the authoritarian Jorge Ubico administration (1931-1944).  Arbenz was subsequently overthrown in 1954 by U.S.-backed and supported soldiers who accused him of being a “Communist sympathizer” after he purchased arms from then-communist Czechoslovakia. Like Arbenz, Rubio Castañeda is willing to challenge Guatemala’s status quo.

According to Castañeda, for each of the five richest Guatemalan families, there are 380,000 people living in poverty. And these five oligarchic families have achieved enormous leverage by marrying amongst themselves and executing corporate buyouts, he writes. Castañeda alleges that these families often cajoled ex-President Otto Pérez Molina, who was ousted in 2015 and is now in jail on charges of corruption, to draft economic policies reflecting their interests. The Gutierrez Bosch, Castillo, Paiz, Novella and Herrera families employ some 60,000 workers in Guatemala and together are worth over a billion dollars, according to Castañeda. He charges that there is an oligarch behind every retrograde economic and social law drafted by the country’s Congress.

Castañeda writes that Guatemala does not have free executive, legislative or judicial branches because these institutions answer only to the machinations of the five families who act as puppet masters over elected and appointed officials. What typifies these distinct families— who hold monopolies in cement, coffee, rum, beer, fast-food restaurants, sugar, and raising poultry— is their failure to pay their fair share of income taxes. In fact, in 2016, Guatemala had the lowest tax rates in the world, with a top income tax rate of 7%.

Castañeda characterizes Guatemala as a country with no control over its own natural resources, whose economic development has been ceded to private entities. He condemns nineteenth century Presidents like Rafael Carrera and Justo Rufino Barrios for giving away nearly 50,000 square kilometers (about 30,000 miles) of land to Mexico, principally in Chiapas and to the United Kingdom in what would then become Belize for “next to nothing.” While this historical discussion is important, the unpacking of old gripes distracts from Castañeda’s broader analysis of how present-day leaders profit by deflating wages and selling off valuable natural resources.

His arguments are on more solid ground when he indicts former president Otto Perez Molina and his former vice-president Roxanna Baldetti, for corruption and executing policies that continue to favor the rich, urging his military companions to “have the moral solvency not to kneel down in front of these powerful oligarch families. We owe this to the people to whom we should genuinely serve.” He appeals to intellectuals, professionals, labor leaders, workers, campesinos, ex-guerrillas, students, salary workers, craftsmen, and small indigenous farmers to come together in an alliance to confront Guatemala’s oligarchy.

However, he provides little analysis of the forced resignations and imprisonments of Otto Perez Molina and Roxanna Baldetti, which came about through weekly public protests and revelations by the Comisión Internacional Contra la Impunidad en Guatemala (International Commission against Impunity in Guatemala, CICIG). Nor does he discuss how Jimmy Morales, a former television clown, ascended to the presidency in 2016, with support from members of the military.

Castañeda argues convincingly that these oligarchs seek to enlarge their wealth through exacerbating the poverty of their fellow citizens. According to UN data, if not for remittances—money sent home by Guatemalans working abroad— Guatemala’s poverty rate would surpass what it was in 1954. Facing this grim reality, Castañeda proposes that Guatemala follow the economic policies of Ecuadorian president Rafael Correa (2007-2017) and former Uruguayan president Ernesto “Pepe” Mujica (2010-2015), whose administrations successfully reduced extreme poverty. Castañeda also argues that although Chile has pursued a largely neoliberal economic agenda, it has offered its poorest citizens a certain degree of social mobility – a somewhat dubious claim as Chile has some of the region’s highest rates of inequality.

For all practical purposes, Castañeda argues, Guatemala is a failed state. Poverty, malnutrition, and murder continue to spiral higher. Three-fifths of the population lives in poverty, 49.6% of children under five suffer from malnutrition, 25% of all Guatemalans are illiterate, and 2.6 million children, teenagers and young adults are not in school, according to research by the Instituto Centroamericano de Estudios Fiscales (Central American Institute of Fiscal Studies). One in three are undernourished, the second highest rate in Latin America and the Caribbean after Haiti.

Castañeda highlights the hypocrisy of the oligarchy’s tendency to blame the state for these failures, although they benefit tremendously from them and have insisted that neoliberal policies and unfettered capitalism would raise incomes. In Guatemala, the beneficiaries of the “failed state” are the same people who decry it.

But how does the oligarchy stay in power, if it has facilitated so much suffering in Guatemala? Castañeda claims that they are able to do so through their control of the media—these families own many of the newspapers and all the public television channels. No independent regulation of the media exists, according to Freedom House. Instead of paying the appropriate value-added and income taxes, Castañeda argues, the media spends their profits buying off customs agents and contributing to the political campaigns of corrupt candidates.

Elsewhere in his book, Castañeda argues that Guatemala should control the profits from its natural resources—oil, gold, silver, copper and nickel. Laws drafted in the 1990s during the Álvaro Arzu government (1996-2000) mandated that Guatemala receive a paltry 1% of royalties from natural resource exports. He contends that hydroelectric power producers are provided huge concessions and then sell electricity back to the population at inflated prices. Castañeda believes that Guatemala’s government should invest in hydroelectric power and use the profits to finance social programs, as “Pink Tide” governments in Latin America have done over the past decade. He does not however, suggest an alternative to extraction. Instead, he strongly believes in nationalizing natural resources or negotiating contracts to primarily benefit the people, both in monetary and production terms. In particular, he condemns Mina Marlin, a mine owned by Perenco Limited Montana Exploradora Goldcorp, a company who land is protected by military brigades paid 40 quetzales a day (US$5.50).

Plus, Castañeda cites, one percent of the population owns 80% of Guatemala’s cultivable land. This has occurred as government after government has encouraged the cultivation of export crops like sugar and African palm, which strip soil of nutrients, over the production of fruits and vegetables that would directly benefit local people. This, he says, is a tragedy that will continue to raise malnutrition and undernourishment within the population. According to Castañeda, what large landowners want, particularly in the sugar industry, is impoverished laborers who have no chance to improve their standard of living. Producers benefit enormously from selling sugar abroad at a lower price than in the domestic market, while contributing next to nothing to Guatemalan society as a whole. Guatemala lacks an adequate rural development policy, which, Castañeda argues, would help small farmers and the indigenous population meet domestic needs. An agrarian reform, he writes, is crucial.

Castañeda also notes that the national debt is so high that it almost strangles the country. Significantly, Guatemala’s internal debt to national banks – 55,414 million quetzales, or around $7.5 billion USD, according to state financial data – exceeds its debt to foreign banks, significantly enriching local oligarchs who own domestic banks. Thirty cents of every dollar in the state budget goes to pay the internal debt, with interest rates above 10%. Costa Rica, in contrast, pays 2% interest on its domestic debt.

What is most significant about Colonel Rubio Castañeda’s book is that, as an active military officer, he has broken the “blue wall of silence,” a term that refers to how police officers protect each other and maintain impunity. Castañeda criticizes the military for protecting the oligarchy and repressing the larger Guatemalan population. The Colonel has thrown a powerful wrench against this glass wall. His courage is admirable, but in launching such seething indictments, he may well have risked his own life in a country known by many as Guatebalas (Guate-bullets).