What Nicaragua Teaches Us about Climate Disasters

From increasingly frequent storms to food insecurity, Nicaragua has been hard-hit by the impacts of climate change. In the wake of Hurricane Harvey and facing Hurricane Irma, we can learn from their response. 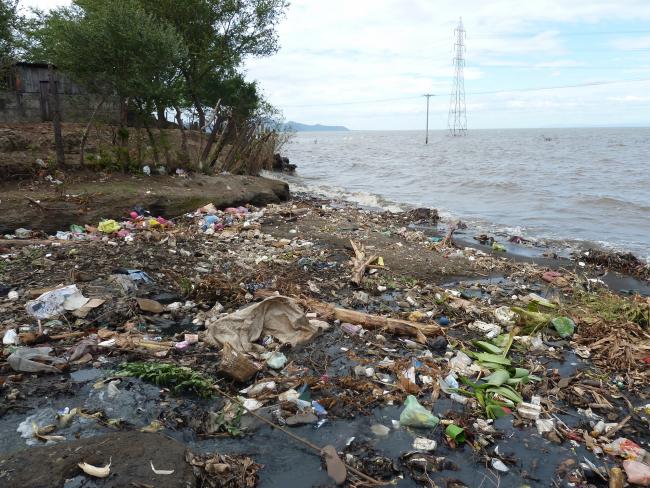 Julio Baldelomar and Aryeri Rodríguez are flood victims, but you rarely hear about the plight of people like them. In April 2009, they were squatting on the shore of Lake Xolotlán, a polluted lake nearly the size of Los Angeles that lines the north side of Nicaragua’s capital, Managua. Aryeri was fleeing an abusive household, and her work as a food vendor didn’t earn her enough to rent a place to live. She asked her boyfriend Julio—who wanted to escape living with his parents—to join her. They built a sheet metal shanty on an open part of the lakeshore and lived for sixteen months “in healthy peace,” as Julio says. Until weeks of torrential rains in September 2010 forced them out of their home and the Humanitarian Rescue Division of the Nicaraguan army helped them evacuate.

The climate phenomenon known as La Niña—likely strengthened by global warming— unleashed these rains. More than 10,000 Nicaraguans lost their homes in this flood. Most of them languished for months in more than 100 government-run emergency shelters. Eventually, they were resettled in furnished homes built by the government. After enduring sixteen months in a dark shelter cubicle, Julio and Aryeri received a free three-room concrete house in a new community that includes a health clinic, a school, a vocational education center, a park, and a police station. It is their first home without a dirt floor. When Aryeri awoke the first morning there, she told me she felt like she’d gone to heaven.

Without the Nicaraguan government’s help with evacuation and resettlement, she and Julio probably would have lost much of what they owned and squatted in a high-risk location again. Had they done this, they would’ve been imperiled once more in 2011, when another weeklong storm without a name parked over Central America and put almost 10 percent of the country under water. 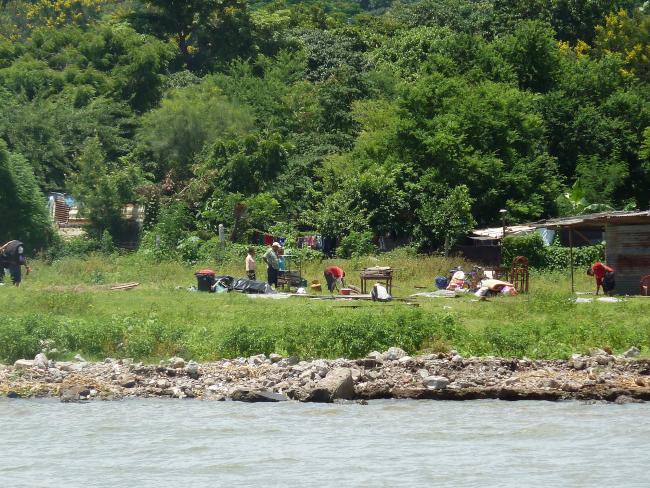 Such storms are becoming more frequent in Nicaragua, and rainfall is becoming more intense, while overall precipitation is declining. According to the 2017 Germanwatch Climate Risk Index, between 1996 and 2015, Nicaragua was the world’s fourth-most-affected country by extreme weather. On average, more than two extreme weather events a year killed more than 160 people annually and caused annual economic losses of more than 1 percent of Nicaragua’s GDP. By comparison, in the U.S. the equivalent number of dead out of the total population would be almost nine thousand every year: approximately five times the number caused by Hurricane Katrina. In proportional economic terms, the direct damage in the U.S. would be roughly the equivalent of that from four to seven Hurricane Sandys every year and more than two hundred billion dollars (based on 2016 GDP). Even in the world’s richest country, such impacts would be not only tragic, but economically debilitating. In Nicaragua—a country of only six million with a gross national income per capita of $2,050—these impacts mean chronic calamity.

This was the context for the Nicaraguan government’s decision not to sign the Paris Climate Agreement last year. President Daniel Ortega’s administration objected to the agreement for reasons very different than U.S. President Trump’s: Nicaragua criticized the agreement’s voluntary basis for reducing carbon emissions and its lack of a mechanism to make the countries that emit the most carbon primarily responsible for addressing climate change. Nicaragua emits only .03 percent of the world’s human greenhouse gas emissions, while suffering dispropotionate effects of climate change.

For people living on Nicaragua’s economic margins like Julio and Aryeri, climate violence isn’t just a temporary peril. It makes everyday life harder through food insecurity, public health problems, and damaged infrastructure. These gradual effects are less visible than superstorms, but they combine and persist to undermine people’s long-term well-being and livelihoods. But the global media largely ignores these cumulative effects.

One of the most profound impacts of climate change in Nicaragua is food insecurity. About 30 percent of Nicaraguan workers are employed in agriculture. When extreme weather damages crops, both their pocketbooks and stomachs suffer. Over the past forty years, the yields of the staple crops corn and beans have stagnated—partly due to rising temperatures—and crop losses due to droughts and floods are becoming more common. These declining yields and losses cause food stress not only for subsistence farmers but also for urban consumers. After the 2010 flood that displaced Julio and Aryeri, prices of the foods that provide almost half of Nicaraguans’ calories—red beans, corn, and rice—spiked due to crop failures. This happened again due to flooding in 2012 and repeatedly during the record-breaking El Niño drought years of 2014 and 2015. When the prices of staples go through the roof, many people in both rural areas and cities eat less, eat only plain rice, or don’t eat at all.

Growing climatic variability also causes other public health problems, particularly in low-income communities, where they often perniciously stew together. In recent years, Nicaragua’s volatile weather has contributed to repeated epidemics of deadly leptospirosis—caused by rodent-borne bacteria that spread in water—and a rise in gastro-intestinal and respiratory illnesses. Three of Nicaragua’s largest cities also experienced outbreaks of mosquito-borne dengue fever after periods of intense rainfall between 1993 and 2010. Evidence suggests that the warmer and intermittently wetter conditions associated with climate change may also contribute to the spread of Zika virus. Floods frequently compromise drinking water sources, as well, exacerbating health problems. Finally, an estimated hundreds of thousands of Nicaraguan workers face heat stress on the job, and climate change is expected to cause many more workplaces to exceed the threshold for safe, steady labor.

On top of extreme weather’s health impacts are its damages to already-inadequate infrastructure. Many of Nicaragua’s bridges, for example, weren’t designed for the quantity of rain that now falls in intense bursts rather than over the course of several months. According to Suyén Pérez , general director for climate change in the Nicaraguan Ministry of Environment, when floods and landslides degrade bridges and roads, farmers can’t get crops to market, access to health clinics and hospitals is restricted when it is often most needed, and governments with limited budgets have to sacrifice human development projects such as schools to repair transportation infrastructure. “This is climate change,” she emphasizes, “that our infrastructure can’t withstand the extreme phenomena anymore.” To address this problem, the Nicaraguan Ministry of Transportation and Infrastructure is working with the Inter-American Development Bank to incorporate climate change concerns in road design. International partnerships like this have helped the Central American nation confront the climate crisis in ways many richer countries haven’t mustered.

As Hurricane Irma looms and the losses from Hurricane Harvey are still being counted, the U.S. is debating how to better understand, prevent, and respond to disasters. From evacuation and resettlement of low-income flood victims to emergency simulation to low-cost insurance, Nicaragua has many lessons to impart. In particular, Nicaragua offers an example for how to help the most marginalized people survive disasters and rebuild their lives afterwards.

Between 2009 and 2014, the Nicaraguan government evacuated and built homes in safer locations for almost 30,000 flood, landslide, and earthquake victims and people living in vulnerable places. This has helped keep the number of flood fatalities relatively low in Managua especially, given that parts of this city of almost two million are regularly inundated. Nationwide emergency simulation exercises are another effort to lessen the human costs of disasters. A 2016 simulation exercise aided by the World Food Programme involved more than one-twelfth of the country’s population and all but one of its municipalities. And to help recover from climate catastrophes, Nicaragua has joined an innovative program supported by The World Bank that allows countries to access low-cost insurance against natural disasters. In 2015, Nicaragua was the first Central American nation to join.

The country is also invested in mitigating climate change through increasing its use of renewable energy. In 2016, Al Gore’s Climate Reality Project ranked Nicaragua number three in its list of global renewable energy leaders, behind only Sweden and Costa Rica. Wind, solar, hydro, and geothermal sources now provide about half of Nicaragua’s energy, and the government aims for 90 percent of energy to be from renewables by 2020.

Of course, the Nicaraguan government is not without faults. The U.S. Senate is currently considering a bill that would hinder multilateral loans to Nicaragua from international financial institutions due to the country’s lack of transparent elections. Undoubtedly, President Ortega’s consolidation of power has endangered Nicaraguan democracy. But given that climate change is arguably one of the greatest threats to democracy everywhere, the U.S. should focus on its own lack of action on the climate crisis and consider what it can learn from Nicaragua instead of sanctioning it. 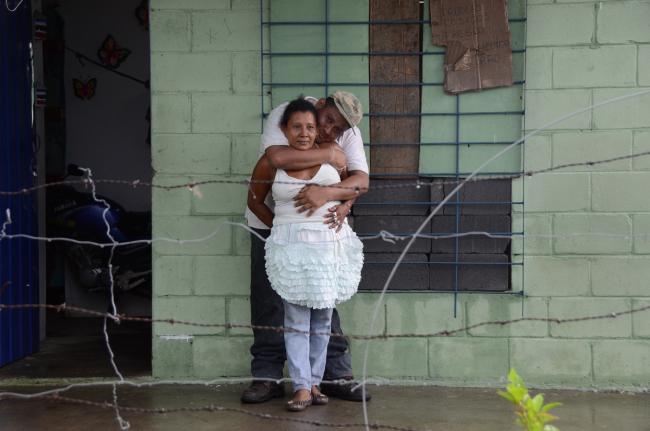 The lives of Julio, Aryeri, and thousands of other Nicaraguans demonstrate that climate disasters aren’t just dramatic storms that come and go from the headlines. They’re often slowly unfolding calamities that combine to make already vulnerable people even more vulnerable. The Nicaraguan government shows it understands this through its multi-faceted response to the climate emergency. Its discourse of empathy for the most vulnerable is also a crucial contribution to the ways we talk about climate change. The words “dignity” and “love” often spill from Sandinista officials’ mouths.

Aryeri is grateful to Ortega’s government for helping her and Julio restart their lives after losing their home. Today, she runs a small store and video arcade in their new house, and Julio helps her when he’s not out selling food on the streets. For the first time in their lives, they have a secure place to call home.

“To be in this heaven, I suffered so much,” Aryeri says.

To better prevent and respond to the disasters sweeping the planet, we should heed both her suffering and the relief that helped her find heaven.

Douglas Haynes is an essayist, journalist, and poet whose work has appeared in  Orion, Longreads, Virginia Quarterly Review, Huffington Post, Boston Review, and many other publications. He is author of the forthcoming book Every Day We Live Is the Future: Surviving in a City of Disasters. He teaches writing at the University of Wisconsin Oshkosh.