A Power Struggle Unfolds in Guatemala

As the International Commission Against Impunity in Guatemala (CICIG) furthers its investigations into political corruption, the elite political class attempts to shield itself from accountability to the people. 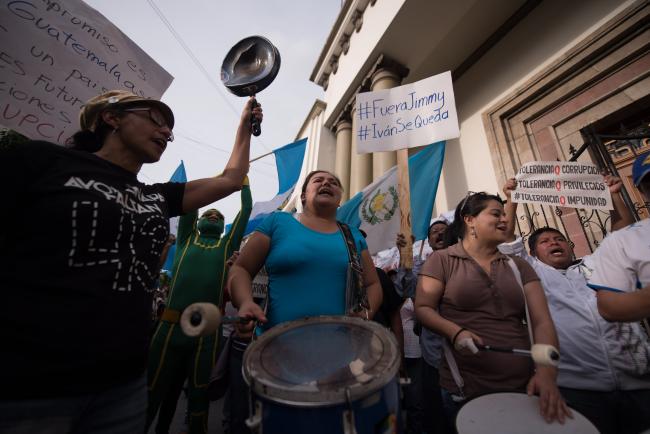 Last Sunday, President Jimmy Morales attempted to expel Colombian lawyer and lead investigator of the United Nations backed International Commission Against Impunity in Guatemala (CICIG), Iván Velásquez, from the country. The anti-corruption body was formed in December 2006 and made history after its corruption case against former Guatemalan President Otto Pérez Molina led to his resignation and prosecution in 2015.

Early in the morning of August 27, Morales released a video declaring Velásquez a “persona non-grata,” and ordered his immediate expulsion from the country. He argued in the video that Velásquez had violated the sovereignty of Guatemala by meddling “in domestic affairs, which are the sole responsibility of the Guatemalan state.”

Following the President’s declaration, the Guatemalan Constitutional Court ruled that Morales could not expel Velásquez. On August 29, the Court indefinitely suspended Morales’ decision. Furthermore, legal experts stated that his order was invalid since only Morales and not his advisers had signed the order for expulsion.

“This crisis was provoked by the government, specifically by the President Jimmy Morales,” said Jesus Hernández, a professor of political science at the Rafael Landívar University in Quetzaltenango, Guatemala. “But this was also provoked by the old guard of the military that oppose the CICIG's corruption investigation.”

Just days before Morales issued the video, he had traveled to New York to meet with United Nations General Secretary António Guterres to issue a list of complaints against the CICIG, stating the anti-corruption body has affected his mandate as president.

As Morales met with the United Nations General Secretary, the CICIG and the Guatemalan Public Prosecutors office (MP) held a press conference to unveil their case against President Jimmy Morales, who campaigned in 2015 with the slogan “neither corrupt or a thief,” and his party, the FCN-Nación (National Convergence Front).

In their investigation, the CICIG/MP, led by Attorney General Thelma Aldana, unearthed that the National Convergence Front had about USD $325,000 in anonymous donations, and about USD $600,000 in unreported expenses during the campaign. According to investigators, the failure of the party to declare their sources of finances for the campaign violated Guatemalan electoral law.

“By action and omission, [the investigation] generated relevant criminal facts that could give way to a criminal case against him,” investigators stated in their report.

On September 4, the Guatemalan Supreme Court voted on whether Morales should lose his executive immunity and face legal charges for illicit financing of his electoral campaign. The court ruled that there were grounds to remove the president’s immunity based on the CICIG’s investigation, and transferred the decision to Congress. If Congress votes to strip his executive immunity, then prosecution of the president and his party can move forward. Both face challenges due to the number of members of Congress who favor maintaining the status quo.

Morales, a former comedian who was known for his sketch comedy show, which he would regularly perform in black face as well as in offensive sketches where he acted as an indigenous campesino, was elected in 2015 to replace former general Otto Pérez Molina. He won the election as a result of his promises that he was not a traditional politician, with low voter turnout.

Morales’ party, the National Convergence Front, was founded in 2004 by members of the Association of Military Veterans of Guatemala (AVEMILGUA), which still holds close ties to the party. On September 2, the Supreme Electoral Tribunal (TSE) revoked its recognition of the National Convergence Front, and bared the party from holding any political activities. This comes as a result of the party’s failure to pay fines of nearly $60,000 USD for various infractions from the election.

This week, the current crisis has brought protesters in favor of CICIG once again to the country’s plaza, yet the protests have yet to reach the same numbers as in 2015. This could be due in part to the fact that the case against Morales does not include public finances, as did the case against Pérez Molina. But according to Hernández, the movement could grow significantly following the decision by Congress on whether or not to impeach Morales.

“If Congress chooses not [to impeach the President], then I believe that the mobilization will be much bigger,” said Hernández.

Guatemala’s popular movements rallied behind CICIG’s top investigator as the crisis unfolded. Organizations such as the Campesino Development Committee (CODECA) and the United Campesino Committee (CUC), as well as the country’s Indigenous Authorities carried out protests outside the Guatemalan National Palace and CICIG’s offices in Zone 14. On August 27, the Indigenous Municipality of Sololá blocked the Pan-American highway in support of Velásquez. 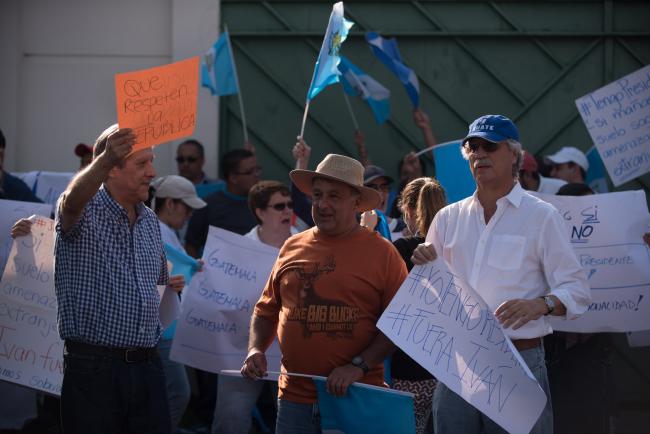 As popular movements rallied in favor of Velásquez, members of the far-right, including the Foundation Against Terrorism, demonstrated against him and CICIG.

“This action [against Velásquez] has also further divided the country between those who are in favor of the investigations and those against them,” adds Hernández. “This is a political error.”

Simply put, this current crisis falls along the lines of those that wish to change the corrupt and violent Guatemalan political system, and those within the oligarchy and extreme-right wing that seek to maintain the system for their own benefit. “Their goal is to stop the investigations, and to allow the old structure to return and re-organize itself,” said Hernandez. “It is a perverse play.”

Corruption has become entrenched within the Guatemalan political structure as a result of neoliberal privatization that has weakened the state, as well as the rise in organized crime, some linked to the military old guard of the military following the end of the 36 years of the internal armed conflict. These forces have found their way into every structure of the state, and passed from one administration to the next since Guatemala’s return to democracy in 1985.

“The impacts of corruption are felt in the communities,” said Leiria Vay, a leader with the campesino organization CODECA. “There poor education, poor healthcare, and the highways are in poor condition. We have rights as citizens, but the state is not complying with these rights.”

The removal of Pérez Molina in 2015 only brought these structures to the surface, and represented the first steps in uprooting the corrupt structure. And those in the country that wish to see Velásquez leave have already made the situation tenser in their attempts to maintain the corrupt system.

“I signed the peace accords [in 1996, ending the civil war], but I can also make a war,” declared the Mayor of Guatemala City, Alvero Arzu, in a statement in favor of Morales.

The National Convergence Front has a long history of speaking out against the CICIG. In the 2011 election, then National Convergence Front presidential candidate, Ricardo Sagastume Morales, spoke out regularly against the anti-corruption body. Plus, the investigation into the financing of the Morales campaign is not the first crisis the administration has faced. In 2016, Morales’ older brother Sammy Morales, and Jose Manuel Morales, the President’s son, were both arrested on accusation of fraud.

In another high-profile case, Morales’ right-hand man, Edgar Justino Ovalle Maldonado, a former Colonel, alumnus of the School of the Americas, co-founder of the National Convergence Front and current Congressional member, was stripped of his immunity and faces criminal charges for his part in human rights abuses, as well as the campaign of forced disappearances during the civil war. Ovalle Maldonado is widely considered to be the party member that ushered in Morales in 2012, following Morales’ failed attempt to run for mayor of the municipality of Mixco in the 2011 election. But after losing his immunity, Ovalle Maldonado fled from Guatemala, leading to an Interpol warrant for his arrest early this year.

Despite the attacks on the Velásquez and CICIG, Commissioner Velásquez has stated that he will continue his work. “We will continue with our activities and our functions in compliance with our mandate, which we have done up to this moment,” he said in a statement to the press.

The CICIG has played an important roll in exposing and rooting out the corruption and impunity that has coopted the state, and needs to continue into the future. It represents one of the key factors in Guatemalan society to form a state that works for the interests of the population, and not an elite minority that seek to maintain their influence through widespread corruption.

Jeff Abbott is an independent journalist currently based out of Guatemala. His work has appeared at The Progressive, In These Times, and Upside Down World. Follow him on Twitter @palabrasdeabajo