Who Will Rebuild Houston?

After Hurricane Katrina, Latinx workers were exploited and targeted. In the age of Trump, as Latinx immigrants seek employment in Hurricane Harvey recovery efforts, the stakes are higher than ever. 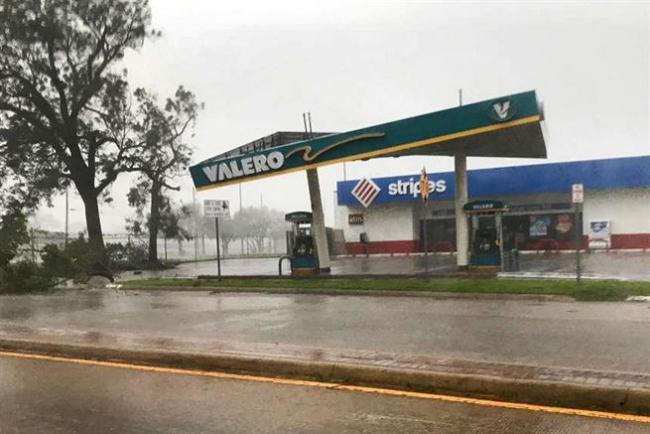 In the wake of Hurricane Harvey last week, a number of media reports focused on Latinx immigrants who dedicated themselves to early recovery efforts. Alonso Guillen, a Dreamer who drowned when his boat capsized while rescuing flood victims, and Jesus Contreras, a DACA-recipient and paramedic who spent six days in disaster recovery will lose his status within six months now that the Trump administration has rescinded DACA, barring Congressional action.

But beyond these individuals’ sacrifices to the recovery efforts, there is a larger politics at play involving disaster cleanup and undocumented workers. As unauthorized workers organize their crews to head to Houston, speculation has already begun regarding the exploitation and potential deportation of Latinx immigrant labor working in postdiluvial recovery efforts.

After Hurricane Katrina in August 2005, around 100,000 Latinx workers headed to the Gulf Coast to do recovery work. A report published by Tulane University and UC Berkeley shows that half of the reconstruction workers after Katrina were Latinx and at least 54 percent of those workers were undocumented. As these workers gutted houses, repaired roofs, and collected trash, labor abuses at the hands of contractors and recruiters abounded. With the heightened anti-immigrant climate in Trump’s America—immigration checkpoints left intact during Harvey evacuations, the pardoning of the Joe Arpaio on August 25, the announcement of DACA’s repeal on September 5, and the impending construction of the border wall—it is fair to question if the Latinx community will be deterred from participating in recovery efforts this time around for fear of detention and deportation.

In Katrina’s aftermath, the Bush administration ceased its migration enforcement operations in areas affected by the hurricane, while temporarily suspending federal labor laws in the name of boosting reconstruction efforts. This left employers unregulated with no one to ensure payment or protections to workers. Bush’s suspension of labor laws included the Davis-Bacon Act, a law that guaranteed a prevailing wage for all federal workers, making cases of wage theft after the hurricane rampant. Some estimates cite tens of millions of dollars in work that still remains unpaid. Even with the reinstatement of Davis-Bacon a few months later, their temporary repeal set a precedent for contractors to discriminate, withhold wages, and deny worker protections, thereby engendering a vulnerable labor force with limited channels to hold employers and public officials accountable.

In addition, lack of oversight by federal and state agencies paved the way for exploitative employment practices. In New Orleans, subcontractors, hired by larger general contractors through Federal Emergency Management Agency (FEMA) grants, recruited Latinx reconstruction workers from other states. Promises of payment between contractors and subcontractors often fell through, with contractors reaping the benefits of deregulation and subcontractors left with unpaid crews.

After Katrina, workers like Daniel Castellanos were internationally recruited through temporary H-2B VISA programs. Castellanos came to New Orleans from Peru in 2005, as one of the first guest workers to arrive post-Katrina. Having invested over $4,000 in the initial recruitment program, flight, and fees, Castellanos sent his family into debt. Yet his employer’s guarantee of free meals, luxury housing, and $15 an hour with a sixty-hour work week as a construction manager made the investment seem worthwhile.

When Castellanos, a trained engineer in Peru, arrived to New Orleans leaving his wife and two children behind, it was a different story. He was paid between $6 to $7 per hour with only a 25-hour average work week doing maintenance and housekeeping in a hotel. He and his coworkers walked 45 minutes to the jobsite, only received free food the first month, and he slept with eight other people in a rat-infested room with holes in the ceiling—far from the standards he was promised—and with insufficient funds to pay back the debt he owed. Daniel’s case illustrates the how recruiters and contracts deceived potential workers to entice cheap labor to New Orleans after Katrina.

Responding to these abuses, the New Orleans Worker Justice Coalition, the Advancement Project, and the National Immigration Law Center published a report in 2006 entitled, “And Injustice for All: Workers’ Lives in the Reconstruction of New Orleans.” Consisting of 700 interviews conducted by student volunteers between January and April 2006, the report details the harsh conditions and deportation of workers after Katrina, offers recommendations on how to protect workers, and calls on communities to develop coalitions.

Heeding this call, organizations like New Orleans Workers’ Center for Racial Justice (NOWCRJ), a multiracial, member-led coalition with an intersectional approach to advancing racial justice, formed to address the housing crisis, workplace abuses, and criminalization by law enforcement. In December 2006, day laborers who experienced much of these early workplace abuses founded a branch of the NOWCRJ called the Congress of Day Laborers. The group, who call themselves the Congreso, formed an anti-wage theft campaign aimed at drawing attention to the widespread problem and help workers recuperate money. Castellanos also fought back against the injustices he encountered, becoming a founding leader and organizer with the National Guestworker Alliance.

In addition to Davis-Bacon, the E-verify system, which has allowed employers to determine workers’ eligibility based on immigration status since 1997, was suspended 11 days after Katrina in order to address the labor shortage and expedite clean-up efforts. Once E-verify was reinstated on October 21, 2005, ICE agents and local police began targeting Latinx day laborers, often at the behest of contractors. Faced with the new threat that their employers could report them to the authorities, day laborers were reluctant to report abuses, making them increasingly vulnerable to wage theft and other workplace abuses by employers.

In one CARI case, a contractor tricked dozens of Latinx workers into gathering in front of an apartment complex to negotiate unpaid wages, which had been a point of contention between the crew and the employer. But instead of their employer showing up, Latinx workers were met by law enforcement and detained by ICE agents. In response to these CARI raids, members of the Latinx community fought back. Led by the Congress of Day Laborers, immigrant workers and their families formed successful campaigns, filed lawsuits, and worked with local law enforcement to terminate CARI and craft more inclusive legislation, which eventually led to a sanctuary-like policy in New Orleans.

If the example of Hurricane Katrina teaches us anything, it is that Latinx communities have continued working despite nativist vitriol and ceaseless anti-immigrant legislation. Twelve years after Katrina, Latinx day laborers are consistently among the early responders during Louisiana disasters. When floods devastated Baton Rouge in 2016, causing damage to over 110,000 homes and displacing thousands of people, Latinx day laborers quickly mobilized to respond to the devastation.

Just outside Baton Rouge, in Denham Springs—a hard-hit region represented by staunch anti-immigrant politician Valarie Hodges—Latinx workers formed part of the relief and reconstruction efforts in her district, including government offices and her constituents’ homes.  Earlier that year, Hodges presented two harsh anti-immigrant bills to the Louisiana House of Representatives—an anti-sanctuary cities bill and anti-immigrant marriage law (which was struck down by a federal district court in April 2017).

Louisiana Attorney General Jeff Landry consistently backs Hodges’ anti-immigrant proposals and was part of the lawsuit against DACA. Back in 2010, David Vitter’s anti-immigrant platform and insidious ads helped to win him senate reelection, illustrating the longstanding anti-immigrant sentiment among Louisiana politicians. Nevertheless, facing this contempt, these undocumented workers remained in the communities they helped to rebuild, establishing their own families and networks.

In the wake of disasters, we at once vilify and rely on the work of day laborers; their lives are rendered deportable although their work is indispensable. Over the past four decades, a drastic shift away from the public sector has paved way for these contracted and subcontracted jobs, and slashed services that oversee labor standards.  As a result, the state bureaucracy so loathed by promoters of free markets shifts the regulation of labor standards to the regulation and criminalization of the laborer. Politicians are quick to point out the illegality of a migrant crossing the border, but these same sources are even quicker to turn a blind eye to a contractor that underpays workers or environmental disasters in communities of color.

Deficiencies and risk fall increasingly onto the backs of the worker rather than on the government or the employer, paving the way for scapegoating of undocumented workers for depressing wages of U.S. born low-skilled labors rather than government policy. This dynamic is used to create animosity among white and black working class workers towards Latinx workers and debilitates a more cohesive, systemic response that addresses the systemic issues that affect all workers—Right to Work policies, limited job mobility, wage theft, mass incarceration. Organizations like NOWCRJ help to bridge these divides, bringing together groups like Congreso and Stand with Dignity, a member-led Black organizing group dedicated to racial equity in the New Orleans economy, to work together to address and combat institutionalized racism and structural barriers that impact these communities.

After Katrina, New Orleans became a laboratory for neoliberal reforms, even earning the title “most neoliberal city” from left-wing media due to spread of charter schools, gentrification, destruction of public housing, and private/public partnerships. Worker exploitation was but one element in a greater trend towards privatization and deregulation—what researcher and journalist Naomi Klein has referred to as “disaster capitalism.”

Already in post-Harvey recovery efforts, anti-labor groups like National Right to Work Legal Defense and finance news outlets like Forbes are publishing reports that call on Trump to suspend Davis-Bacon laws in the wake of Hurricane Harvey. A quick Facebook search shows countless job postings for recruitment; many say bilingual preferred, some offer up to $200 per day compensation, and others include per diem rates to cover food and lodging. Yet based on workers’ experiences in New Orleans and with little anticipated federal oversight in Trump’s anti-labor agenda, workers should be wary, calling into question the validity of these offers. In addition to the exploitation, Latinx workers risk deportation in Harvey and Irma recovery efforts, as Trump maintains his commitment to heightened policing of immigrant communities.

As communities across the country continue to battle with natural disasters exacerbated by climate change and neoliberal policies, the demand for recovery work will only increase. Policies tailored to corporate interests and that demonize immigrants must be identified and ended. Houston, considered the most diverse city in the United States, can avoid the pitfalls seen in Katrina by protecting all workers’ rights, guaranteeing a living wage, and by fostering multiracial organizing and advocacy for working class communities.

Sarah Fouts is a postdoctoral fellow in Latin American and Latino Studies at Lehigh University. Fouts’ research has been featured in the Journal of Southern History, Race, Gender, and Class, and in NPR’s The Salt. More of her work can be found on her website.