Lessons from Mexico's Earthquakes: 1985 and Today 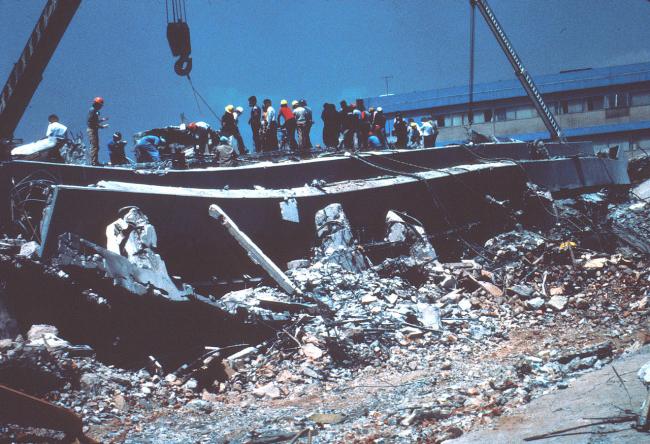 The images coming from Mexico City since September 19 look like colorful digital versions of those I witnessed in 1985 after the earthquake that struck the city on that same date. First, the figures running away from the dust of collapsing buildings, then the groups of volunteers shuffling rubble away from the ruins, or climbing atop those mounds of concrete that still imprisoned survivors. The frantic rescue of children became a heroic, real-time media story, focusing in 1985 on a maternity ward, and today on a school. Both natural disasters prompted a spontaneous outpour of activism that contrasted with the helplessness of the government, as other members of my generation have noted.

It is difficult not to harbor some proud nostalgia when viewing the crowds of young women and men going out to help with with selfless intelligence in the recovery efforts. For my generation, the 1985 earthquake and the mobilization that followed it were early phases in a process of democratization that led to fall of the Partido Revolucionario Institucional (PRI), which held power in Mexico under de facto one-party rule for 70 years: from the disputed federal election of 1988 to the victory of the opposition in the Mexico City election in 1997, to the eventual fall of the PRI from the presidency three years later. After the earthquake, labor and neighbors’ organizations emerged, demanding, among other things, justice for victims and property titles for tenants who had lost their homes. The notion that civil society could push the political class and the entire state apparatus toward greater openness and accountability is firmly rooted in the memory of that second half of the eighties, a decade otherwise lost to hyperinflation, neoliberal reform and corruption. In a way, September 19, 1985, took a place of pride in our generation’s historical memory, next to October 2, 1968—another traumatic event that allowed an earlier generation to realize the gap between its aspirations of freedom and the authoritarianism of the regime.

The historical resonance of those dates suggests that September 19, 2017 will be an event of similar impact. The images seem to confirm the impression. If anything, today’s journalistic coverage and social media language has incorporated the notion of civil society as an autonomous actor. It is likely that the thousands of volunteers see their collective effort as a practical demonstration that civil society is the true engine of Mexican life. The political parties that now dominate the state machinery and compete in the elections were not there in 1985, but today they only serve to highlight the same passivity of the political class in front of catastrophe and mobilization. In a perspective voiced from many sides, mobilization of any kind equals opposition to the state, a state that is blamed for the ills that the earthquake exposed.

It would be wise, however, to examine what the events of these days might signify for the future of the country beyond the analogies. After all, the context is very different today from 32—or 49—years ago. Every month in Mexico we see more people killed by criminal violence and state actors than any of the natural disasters that have taken place this entire year. While over 300 people have been counted dead after the earthquake, over 2,200 were murdered in Mexico in the month of July alone. Yet the lost life of the average victim of a “drug-related execution,” as the media often refers to such deaths, does not mobilize most members of the public. It is the lives that can be saved, those waiting under the rubble, that do so. No such mobilization is possible when the machine guns, more predictable than the earthquakes, sever dozens of young men who, many believe, had it coming.

In addition to the context of the violence of the drug wars, another image that differs from 1985 is the participation of the army and navy in rescue efforts. They have responded in a way that was embarrassingly absent 32 years ago. There’s been no violent hostility between the crowds of volunteers and the soldiers working next to them, despite moments of tension when the military has taken control of areas deemed dangerous. At many damaged locations, residents have criticized the federal government while at the same time requesting evaluation concerning the state of their homes and properties. Television stations interview Navy officers about the situation in rescue sites—even if they exaggerate the hopes of finding victims. Those same officers carefully praise social mobilization. A yellow Labrador helping marines to find victims, Frida, has become one of the icons of the rescue efforts.

These images of collaborations seem to be at odds with the increasingly active role of the armed forces in the “war on drugs” and the human rights abuses derived from the militarization of law enforcement. Is the mutual recognition between volunteers and soldiers undermined or implicitly reinforced by that role? Are these young activists comfortable with agencies of the state that, in other cities and at different times, have been associated with chaotic gun battles, disappearances, and extrajudicial executions? Do these volunteers think that civil society can channel the effort of the same organs of the state that, in other political contexts, they have been protesting against, as in the case of the 43 students disappeared in Iguala, Guerrero three years ago?

In other words, this mobilization can be a proud display of the autonomy of civil society but also a sign of certain acceptance: the role of the state to control violence will not be thoroughly contested as long as other things, like disaster relief, work reasonably well. The state, in other words, is not a monolithic force of oppression but a tool. If this is true we would have to revise the narrative of democracy or regime change that is often associated with natural disasters.

Looking back at the history of earthquakes in Mexico City could yield some simplistic consequences. These would include, for example, assuming that the political and social context has not changed in 32 years. The political system and the state apparatus, however inappropriate to the realities and needs of the country, seems no longer to be the object of unanimous disdain but the label for an uneven set of institutions that can be influenced in different ways. Social media has facilitated some of the rapid responses of non-state groups but so have existing political party structures, most notably Morena or government institutions like the National University. It is meaningful, for example, that one of the most popular ideas in the last few days, put out by Morena's leader, Andrés Manuel López Obrador, has been that political parties cede some of their state-provided campaign funds to help reconstruction. The goal would be to improve the effectiveness and accountability of parties and candidates, but not to get rid of them. It does not seem that citizens today have a taste for a political catastrophe to follow the one caused by tectonic plates. Expecting otherwise might be an artifact of historical memory.