The Right’s Assault on Reason in Argentina

Brutal cuts in government funding for scientific and academic research are a devastating, though lesser known, part of the neoliberal agenda in Latin America. 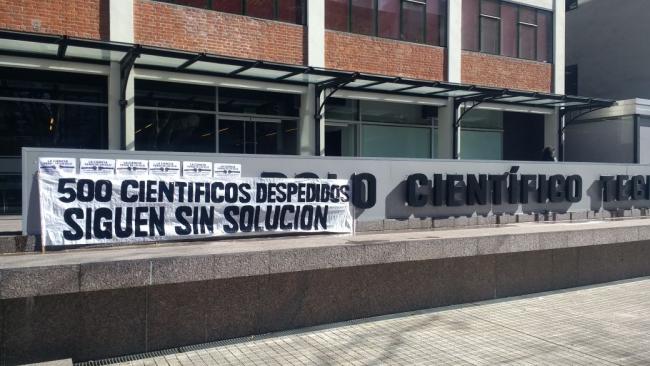 On August 8, 2017, in what looked like a scene from Argentina’s military dictatorship, members of the Argentine Federal Police, dressed in full riot gear, were preparing to enter the Ministry of Science and Technology—by force if necessary. Inside, academics, doctoral fellows, and scientific researchers from Argentina’s National Scientific and Technical Research Council (CONICET) were peacefully occupying the building. Earlier, they had held a “funeral march” around the block of the ministry, symbolizing the “death” of academic and scientific research at the hands of the current government of President Mauricio Macri.

This isn’t the first time that academic and scientific researchers in Argentina have found themselves in the crosshairs of a right-wing government. In 1966, shortly after one of the many military coups that mark Argentina’s recent history, the government dispatched police forces to the various campuses of the University of Buenos Aires (UBA), believing that it had become a haven for communist thought. Students, professors and graduates of the UBA had occupied the campuses to protest the government’s stated plans to intervene in the university, a clear violation of its right to autonomy and academic freedom established during the 1918 university reform movement. The police forcibly and violently evicted the occupiers and destroyed laboratories and libraries. This event became known in Argentina as “the night of the long sticks” (La noche de los bastones largos), due to the type of batons the police wielded against the academic community of the UBA that night. This kind of suppression produced a brain drain in Argentina, with numerous academics and researchers deciding to leave the country and re-establish themselves elsewhere in universities in Latin America, Europe, and North America. Only ten years later, in 1976, Argentina fell victim to another coup that brought in a military regime intent on destroying critical thought in the name of “western, Christian civilization.” Many of the 30,000 disappeared, victims of the military dictatorship, which lasted from 1976 to 1983, were students, professors and scientific researchers. It should come as no surprise, then, that the image of police dressed in riot gear preparing to evict a peaceful occupation of academics, students, and researchers sets off alarm bells for many Argentines.

The current conflict at CONICET, rated one of the top 200 academic and scientific research institutes in the world and the best in Latin America, stems from the results of last year’s admission process, which barred 500 people from CONICET solely due to lack of government funding. In response, researchers and doctoral students funded by CONICET took up the cause of these 500 would-be researchers, calling on Science and Technology Minister Lino Barañao to formulate a plan that would allow the applicants to attend. Barañao is a holdover from the ministry’s creation in 2007 under the previous government led by Cristina Fernández de Kirchner of the Peronist party, who had publicly campaigned for Macri’s rival, Daniel Scioli, also a Peronist, during the 2015 election and subsequent runoff. Now, Barañao works under Macri.

In an interview with a local radio station, Barañao said, “our idea is to modernize the current law in order to implement a system that promotes research in the private sector.” His plan to resolve the ongoing conflict is to relocate the 500 CONICET researchers elsewhere, with an eye towards having them work directly for corporations. It remains unclear whether his dramatic change of opinion is due to the influence of his new boss. In an interview with Página Doce, Hernán Palermo, a CONICET researcher and a member of Cientificos y Universitarios Autoconvocados (Independent Scientists and University Students), one of the many political groups of CONICET researchers and doctoral fellows that organize against these proposed changes, “they [the government] are going to destroy the academic and scientific research apparatus in Argentina, which has its backbone in CONICET.” Many in CONICET now consider Barañao to be a traitor to their community due to his 180-degree turn from his previous public statements, his inaction on behalf of the 500 researchers left without funding and his inflammatory, and often contradictory behavior towards CONICET researchers and doctoral students.

Beyond defunding CONICET, it seems Macri’s government has other changes in mind for the overall goals of the body. According to Ezequiel Adamovsky, a history professor at the UBA and the National University of San Martín as well as a CONICET researcher, the current government wishes to see CONICET reorient itself along more explicitly business-friendly lines. “They told us, in a very explicit way,” he says in an interview with Revista Épocas, “that the goal was that CONICET researchers could transform themselves into ‘entrepreneurs.’ Literally, that was how they said it. The ideology of entrepreneurship is what’s behind the government’s scientific research policy.” Like many in the academic and scientific community in Argentina, he believes that “investment in academic and scientific research should attempt to aim for many of society’s needs. And perhaps, academic and scientific research is called, for example, to not contribute to economic growth but rather to advertise against it.”

This type of posturing creates clear conflicts of interests for scientific research—for example, according to Adamovsky, many of the scientific researchers in Argentina working on agrochemicals have part or all of their research funded by multinational corporations like Monsanto. Even during the Kirchner era, the Ministry of Science and Technology was forced to censor researchers whose work revealed the harmful environmental and health effects of such chemicals, due to the ministry’s dependence on the funding provided by multinationals. Another example of the questionable relationship between scientists and big business is the cooperation between earth sciences researchers and the open-air mining industry. Many geologists in Argentina depend on funding from mining multinationals to do their research, which in turn forces them to surrender their independence and only publish results that corporations like Barrick Gold want coming to light. However, from the point of view of the current government, these ethically dubious alliances between scientific research and the private sector appear to be one of the few things from the Kirchner era worth keeping.

As Leandro Morgenfeld, a CONICET researcher and historian who focuses on the United States and its influence on Latin America, states, “the government considers education to be a commodity that should be deregulated, in agreement with the law of supply and demand.” He adds, “Macri is the first president to not have studied in a public university.” While not having studied in a public university might not sound like an issue in other places, in Argentina, it’s a sign that protecting the country’s crown jewel—its tuition-free and high-quality public university system—isn’t one of Macri’s main priorities.

“Macri’s problem is that CONICET and Argentine public universities are very highly regarded, both in Argentina and internationally,” says Morgenfeld. “So therefore his plan to dismantle it generates resistance and will continue to do so.” It remains to be seen if the fight put up by the academic and scientific community will be enough to stop the government from effectively privatizing, defunding, or liquidating CONICET.

As Macri cuts CONICET’s budget and attempts to “improve” it using familiar neoliberal methods, its defunding and reorganization has begun to garner international attention. A recent article in Nature, one of the most cited academic journals in the world, reads:

Researchers in Argentina, which has the most Nobel prizes of any South American country, also face an uncertain and potentially grim future… Argentine President Mauricio Macri cut the science ministry's budget by 36% in real terms as part of an austerity programme that he hopes will attract foreign investment. Argentine researchers now fear that if Macri's party gains a congressional majority in October's mid-term elections, he will fuse the science and education ministries.

Macri’s drive to cut CONICET’s research budget and reorganize the institute and the Ministry of Science and Technology itself according to the needs of the market is directly linked to the philosophical underpinnings of his political party, Propuesta Republicana (PRO). PRO professes to represent “a new kind of politics,” a party that seeks to transform Argentina into a country of eternally optimistic entrepreneurs and self-help gurus, effectively de-politicizing one of the most politically active societies in the world. Public figures linked to PRO have repeatedly spoken out about the “negative aspects” of “critical thinking” and have proposed “positive thinking” as a solution to economic and political problems.

But perhaps the most striking, and most chilling, part of this entire plan is its ideological parallels with some of the darkest periods in Argentina’s history. “Suspicion when faced with the ability to question the current state of things is the mark of the birth of all types of authoritarianism,” Adamovsky says in Revista Épocas. “This time it doesn’t look the same as it did in the past, with police batons for academics and prison sentences for intellectuals.” He continues, “but we recognize it today by how the government and PRO have sought to put researchers and even public universities themselves under the microscope, attempting to associate them with kirchnerist-era corruption, to the point of promoting a collective judicial complaint against 52 public universities, based on no evidence whatsoever.”

Both Morgenfeld and Adamovsky, along with numerous academic colleagues of theirs, have concurred that Argentina’s public universities represent the values that all academic and scientific researchers should aspire to. The free and open nature of the Argentine public university system promotes the development of a true meritocracy, where the children of factory workers and small farmers can study to become lawyers and doctors at zero cost. Argentine public universities are known for their exceptionally high quality of education, something that attracts students not just in Argentina, but from all over Latin America. This high-quality education is coupled with an emphasis on critical thought, political participation, and a commitment to social equality increasingly at odds with the government’s neoliberal agenda for the country. “Our public universities are not content with being incubators for entrepreneurial optimism and corporate plans,” says Adamovsky.

As of now, it looks like CONICET and the Argentine public university system will not surrender to the government’s proposed privatization, at least not without a strong fight.

Bronwyn Scott-McCharen is an aspiring scholar in the social sciences, with research interests in activism, higher education, inequality and intellectuals/elites. After living and studying in Buenos Aires, Argentina for three years, she has now returned to the United States, where she is currently a Visiting Researcher at the University of Texas at Austin.