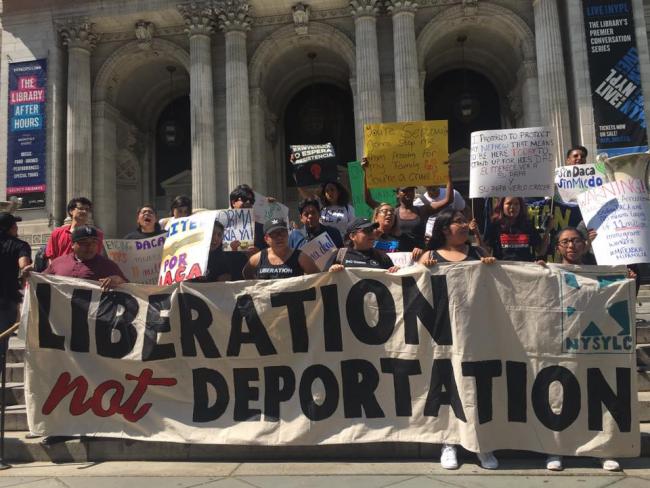 In this special episode of NACLA Radio, Helen and NACLA editor Laura Weiss catch up with Melissa García Vélez and Marlen Fernández following Trump’s announcement that he will rescind the Deferred Action for Childhood Arrivals (DACA) program. We previously interviewed Melissa and Marlen, along with Luis Saavedra and Professor Alyshia Gálvez, last month, about their contribution to the summer issue of NACLA. Melissa and Marlen discuss how to build a new narrative that unites immigrant and activist communities, how the six-month deadline might result in a more militarized southern border, and how to hold government accountable for its role in manufacturing an immigration crisis.

If you or someone you know is a DACA recipient in need of help submitting a renewal application by October 5th or other resources, check out the New Economy DREAMer Loan Fund and United We Dream. The National Immigration Law Center is also a resource for immigrants under DACA, TPS, and other programs in need of legal advice or representation. If you’re a Naclista who would like to get involved or work in solidarity with the immigrant community, check out Stand Up for help making a call to your congressional representative, getting involved with local events, and joining the fight for comprehensive immigration reform.

Melissa García Vélez graduated from Lehman College with a B.A. in social work in 2014. She has organized and volunteered with the NYSYLC, worked as a fellow with Immigrant Justice Corps, and is currently involved with Atlas DIY, an organization for youth. She also teaches dance in New York City high schools and is pursuing opportunities in her own career as a dancer.

Marlen Fernández also graduated from Lehman College in 2014 with a B.A. in Latin American and Caribbean studies and anthropology and is the founding coordinator of educational outreach for the Jaime Lucero Mexican Studies Institute at CUNY, where she directs an educational outreach initiative with sites in Brooklyn and at the Mexican Consulate in New York City.