A disturbing new proposal by members of Guatemala’ Congress could give blanket amnesty to military members for committing war crimes. 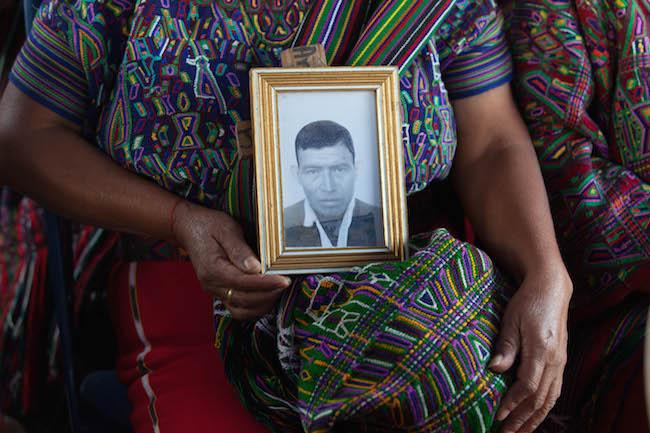 As historic anti-corruption protests continue in Guatemala, another battle over impunity in the Central American country is unfolding. On November 6, 13 members of Congress introduced a proposal to give blanket amnesty to military members accused of committing war crimes during Guatemala’s 36-year-long internal armed conflict. The proposal was introduced by Congressman Fernando Linares Beltranena of the conservative National Advancement Party (PAN).

The reforms come as the Guatemalan Attorney General’s office continues to pursue cases against former military leaders for crimes against humanity, including the high-profile genocide trial against former dictator Efraín Ríos Montt. The office recently signaled they could reopened the case concerning the assassination of Bishop Juan José Gerardi in 1998.

The amnesty proposal seeks to reform the National Reconciliation law passed just prior to the signing of the Peace Accords in 1996. The reform specifically seeks to remove articles 2, 7, and 8 from the law, and provide former military members with a blanket amnesty for all crimes committed. Article 2 and 7 provide guerrillas with amnesty for crimes against the state security forces, while Article 8 provides amnesty for all crimes except genocide, torture, and forced disappearance.

The civil war in Guatemala led to over 200,000 deaths and the disappearance of over 40,000, according to findings by the United Nations backed Commission for Historical Clarification (CEH). Families affected by these campaigns of forced disappearance and killings during the war have strongly denounced efforts to reform the law.

“These proposal on the part of the 13 congressional members on behalf of the ex-soldiers is unconstitutional,” said José Alberto Flores, the spokesperson for the Association of Family Members of the Detained and Disappeared of Guatemala (Asociación de Familiares de Detenidos y Desaparecidos de Guatemala.) “We cannot pretend to create a blanket of impunity within a system that still does not function to provide justice to everyone equally. The actors that are involved with military members are seeking to end the judicial cases against the soldiers,” he said.

Since the end of the internal armed conflict, the Guatemalan judicial system has struggled as an accountable government institution. Between 1996 and 2006, Guatemala suffered from an impunity rate of 95 percent. Since the formation of the UN-backed International Commission Against Impunity in Guatemala (CICIG), this rate has fallen to 72 percent.

Flores explained that Article 8 of the National Reconciliation Law protected against such impunity. “Article 8 of the National Reconciliation law was clear, there was no general amnesty,” he said. “The families of the disappeared have been waiting for more than three decades for justice for their disappeared family members. For the soldiers, their actions were within the context of war. But I ask, is it valid to assassinate, execute, or disappear a child?”

Meanwhile, Congressman Linares Beltranena has argued that investigations of military officers has limited peace in the country. “We want to achieve peace,” he told the Guatemalan newspaper La Hora. “Because since 1996—when the signing of peace was celebrated—there has been no peace; because there has been a disproportionate war in the courts and with the Public Prosecutor's Office, where there are 72 imprisoned officers and specialists and only one ex-guerrilla prisoner.”

The Foundation Against Terrorism, a far-right lobbying group in Guatemala, also supports the reform. In the years since the end of the internal armed conflict, the group has sought to derail the prosecution of ex-soldiers for war crimes and disrupt various social movement across Guatemala through criminalization of activists.

The new amnesty efforts come at the same time as the Guatemalan Public Prosecutor's office’s reinitiating of the high-profile genocide trial against former President Ríos Montt and his military intelligence chief José Rodríguez Sánchez. On October 13, 2017, the historic trial began once again behind closed doors in Guatemala City, after years of delays. The trial could constitute a step toward bringing justice to the communities that suffered during the war.

From 1982-1983, the military waged a scorched earth campaign against the civilian population within the Ixil communities of the Guatemalan highlands, destroying 72 communities, according to the Centre for Human Rights Legal Action (CALDH). This was part of a countrywide counterinsurgency carried out by the military that killed and disappeared thousands of civilians.

The military justified this campaign of death by suggesting that they best way to get to the guerrillas, was to drain the sea of their support, which the dictatorship under Ríos Montt described as “taking the water from the fish.” Residents who survived were forced to seek refuge in the mountains where they faced an uncertain future. In total, 29,000 Ixiles were displaced as part of the scorched earth campaign.

On May 10, 2013, Ríos Montt was found guilty of overseeing the genocide against the Ixil Mayan people that claimed nearly 2000 lives between March 1982 and August 1983. The former dictator was sentenced to 80 years in prison. The watershed case was the first time in the world that a former head of State was found guilty of genocide in its own national courts. But the victory was short lived. Days later, on May 20, 2013, the country’s constitutional court overturned the decision, stating that genocide had not occurred during the war.

“We have always maintained that this is a case that was already decided by a court in the judicial system,” said Miguel de León, the Indigenous Mayor of Nebaj and member of the Ixil Mayan Ancestral Authorities. “This is also part of the game of the state to hide a crime against humanity that we suffered. It is unacceptable if they do not retire him.”

Attempts for appeal and retrial were thwarted by Montt’s lawyers’ claims that Montt was mentally unfit to stand trial. But in 2015, the ailing dictator underwent psychological analysis by the Guatemalan National Institute of Forensic Sciences Institute (INACIF), who declared him mentally stable, paving the way for the new trial. But critics have accused INACIF of not performing an honest assessment.

Despite these setbacks, Indigenous authorities have stated that they will continue in their quest for justice. “We continue moving forward with hope that this repeated trial will say the same thing as the previous court decision,” said Diego Santiago Ceto, another community representative from the Ixil Mayan Ancestral Authorities. “In the mind of the victims, the sentence has already been given. We believe that this is what happened. It hurts to know the truth, but we are hoping for justice.”

The proposed reforms to provide blanket amnesty to military members accused of war crimes, as anti-corruption and anti-impunity efforts spread across Guatemala, represent the persistence of the right wing’s quest to maintain their impunity and power in a changing country.

If successful, the reforms would utterly derail cases such as that against Ríos Montt, in addition to numerous other against military leaders for enforced disappearances during the war. Amnesty would also justify and legitimize the violence and atrocities against civilian populations as an ongoing tactic of war.

Furthermore, amnesty would leave the families affected by the violence in a perpetual limbo in their quest for justice for the crimes committed against civilians, and end their hopes of uncovering the truth of what happened to their loved ones.

Right-wing groups like the Foundation Against Terrorism see the soldiers being tried for their crimes committed during the internal conflict as heroes who saved the country from a foreign Marxist invasion. But they represent a small minority of the population that continues to suffer under a system that benefits a small minority.

“These 13 members of Congress [that proposed the reform] are the shame of our country,” said de León. “They did not arrive to Congress to defend the rights of the people, but rather they arrived to protect special interests and powerful groups.”

Jeff Abbott is an independent journalist currently based out of Guatemala. His work has appeared at The Progressive, In These Times, and  Upside Down World. Follow him on Twitter @palabrasdeabajo.