Amid election violence, Honduran police officers have publicly stated they refuse to crack down on protests. What’s behind this? 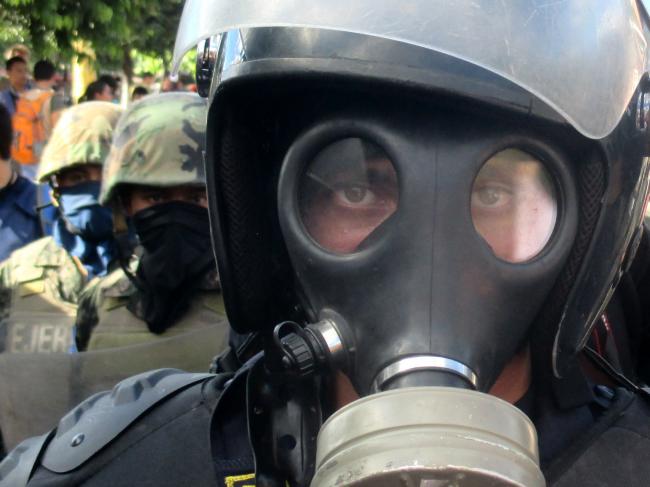 Daniel Isaac Suazo Varela was on his way home the evening of November 30. The 12-year-old had been playing soccer with other kids in El Pedregal, a poor neighborhood in Tegucigalpa, Honduras. He loves the sport and often plays into the evening, but November 30 wasn’t any ordinary evening. On his way home, he crossed paths with a neighborhood protest against electoral fraud just before the military police arrived and opened fire.

Suazo Varela is now in the hospital, recovering from surgery. He was shot in the back by military police. Aside from the entry wound, a long line of stitches runs down his abdomen, from his mid-torso down nearly to his groin. Four other minors, between the ages of 13 and 17, were also in the pediatric post-op ward of the capital city’s main public hospital last week, recovering from gunshot wounds in the context of a violent government crackdown on protests.

On the surface, what’s going on in Honduras is an electoral crisis, and irregularities and widespread allegations of electoral fraud have certainly been the spark and ongoing explicit focus of the crisis. But its roots run deeper. The events of the last two weeks have brought years of contradictions and frustrations bubbling to the surface. The nationwide popular uprising against fraud is also an uprising against increasing authoritarianism and unpopular neoliberal policies. In turn, the violent response to the protests has exposed ongoing tensions within the state, in the form of discontent among security forces.

Hondurans cast their ballots on November 26, and preliminary results released nine hours after polls closed had Opposition Alliance Against the Dictatorship presidential candidate Salvador Nasralla with a stable five-point lead over National Party candidate and current Honduran president Juan Orlando Hernández. The electronic computation system used by the electoral tribunal (TSE) then went down for hours Wednesday, and after it came back online, Nasralla’s advantage began to plummet. Hernández ended up with a 1.6-point lead, according to the TSE, which has yet to declare a winner.

The Opposition Alliance and third place Liberal Party both say Nasralla won, according to their calculations using the same vote tally sheets as the electoral tribunal. Observers, political parties, and even one of the tribunal representatives have all questioned the process, to the point that the Organization of American States (OAS) refuses to validate the results.

“The tight margin of the results, and the irregularities, errors, and systemic problems that have surrounded this election do not allow the Mission to hold certainty about the results,” the OAS electoral observation noted in a December 4 statement when it released its preliminary report of the elections.

On December 12, the Opposition Alliance met with the OAS and European Union electoral observation missions to hand over copies of vote tally sheets with discrepancies and other documentation the alliance alleges shows evidence of fraud. The alliance has filed challenges with the TSE seeking to annul the count and results, as well as a formal complaint with the Office of the Public Prosecutor accusing TSE president David Matamoros Batson of breach of public duties and other crimes. The TSE is currently reviewing more than 100 challenges. According to the country’s electoral law, the tribunal has until December 26 to officially declare a winner.

One thing is for certain, though: mobilizations will continue. At a December 11 press conference, opposition alliance coordinator Manuel Zelaya, the former president who was deposed in a 2009 coup d’état, reiterated his call for permanent protest in every neighborhood, town, and community in Honduras. Highway and road blockades, marches, and other actions continue to pop up around the country.

“People can’t take it anymore,” Carlos Amador, a teacher and longtime activist, said while taking part in a massive march against electoral fraud on December 3 in Tegucigalpa. “Violence continues. Impunity continues. It’s a narco-state. People are fed up.” 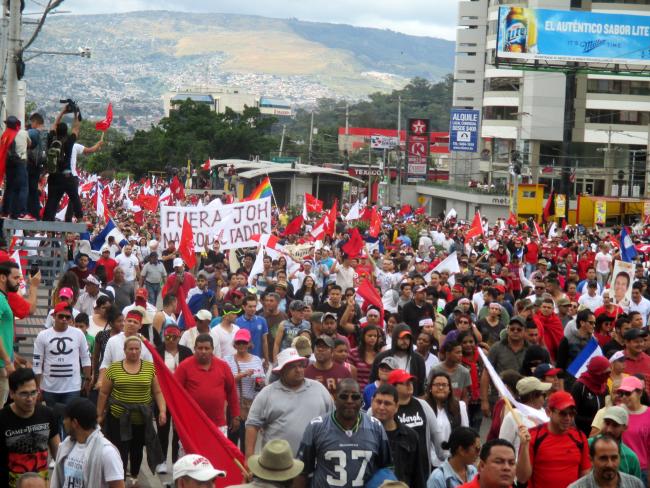 The Hernández administration’s response to protest actionshas been fierce. Three days after the U.S. State Department certified that Honduras is making progress on issues of corruption and human rights, freeing up millions in security aid, the Honduran government enacted a state of exception on December 1. For 10 days, people around the country defied the measure’s nighttime curfew with evening protests in the streets. At least 14 people have been killed in the context of the curfew and crackdown. Dozens have been injured and hundreds arrested, according to the Committee of Relatives of the Detained-Disappeared in Honduras (COFADEH).

Nearly all of the killings have been cases of protesters killed by security forces, but two of the 14 who died were police officers. The shootings were not political and occurred during curfew hours. Police approached a group of civilians on the night of December 3 for being out past curfew, who then opened fire, gunning down two police officers.

The killing of the two police officers was the last straw that motivated rank-and-file police to stand down and disobey orders to crack down on protests, a member of the COBRA special operations unit of the police who wished to remain anonymous said at the unit’s headquarters in Tegucigalpa. On December 4, police officers from various branches of the national police forces walked off the job and began arriving by the truckload to the headquarters of the Cobras, a special police force that has received training and funding from the United States. The next morning, Cobra agents as well as Tigres, another U.S.-trained elite police squad, gathered at headquarters alongside rank-and-file members of the transit police, border police, police investigations directorate, and preventative police.

“When they heard of the situation, the high officials [of the police] said by way of the media that we were asking for bonuses, raises, and other things that aren’t true. We made the decision after the death of our colleagues in Olancho,” said the Cobra agent. The issue was the orders to crack down on protests amid a political crisis, he and others insisted. Three agents present affirmed that threats of dimissal had been circulating.

On December 5, hundreds of police gathered around bleachers at the edge of a field in the Cobra unit facilities, where a green, winged, cobra painted onto the side of a lookout tower faced the crowd. They gathered to publicize their latest statement and to hear from National Police Academy director Javier Díaz Herrera, who brought a message on behalf of the Secretariat of Security.

Before he read out the collective statement, the spokesperson for the police action told Díaz Herrera and the crowd that “our issue is not about money,” and that “politicians should resolve their political issues.” Police had decided to return to their posts and duties, but maintain they will continue to refuse to engage in repression against protests or citizens. “The national police reaffirms its commitment to Honduran society and we stand firm [in our promise] to not repress the Honduran people,” the group engaged in the work stoppage wrote in its December 5 statement.

And yet, Díaz Herrera announced that officers would receive their regular bonus by 2 PM, as well as an “electoral bonus” that day or the next. In addition, Díaz Herrerra said that lowest-ranking police would receive incremental raises beginning this month. Each point provoked a clamor from the crowd, with yells of “No!” and “it’s not because of that!” 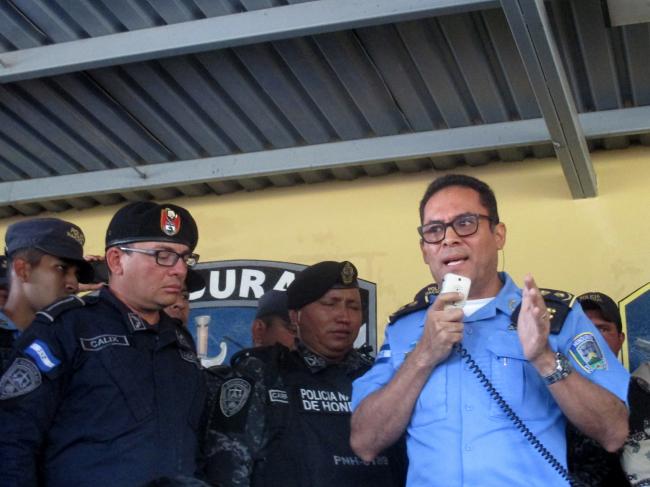 Honduran police have engaged in wildcat actions before, but they’re usually confined to one particular branch or unit, as opposed to rank-and-file police of all kinds all around the country. Officials and international media painted their work stoppage on December 4 and 5 as being solely financially motivated or as rising up against repression, but the two are not mutually exclusive. The timing of the stoppage was directly linked to the killings of the two police officers in Olancho, according to participants. But the action is also the result of years of tensions between police and Hernández.

The police action this month, then, can only be understood in this context of Hernández’ lavish support for the military police at the expense of national police, according to Bertha Oliva, the coordinator of COFADEH.

“It’s not something that arose from the fraudulent elections, but from a build-up police have been experiencing of actions and attitudes against the rights they have legally acquired and won. And from the clear intention of Juan Orlando Hernández to not support the Secretariat of Security and instead strengthen every level of the military forces,” Oliva said.

Militarization has increased drastically since the 2009 coup d’état. Oliva worries that if Hernández remains in power, he might abolish the national police entirely. While the national police force along with the military police have been wrought with scandals involving corruption, drug trafficking, and human rights violations, full-scale militarization is not the answer, according to Oliva.

“It’s very possible that [Hernández] dissipates or eliminates the Secretariat of Security and that everything goes back to how it was before, when everything fell under the Ministry of Defense—under the armed forces. And if everything is controlled by the armed forces, we’ll go back to having military dictatorships disguised as democracy—a president quote-unquote ‘democratically’ elected but with a military force acting against the citizenry,” she said. 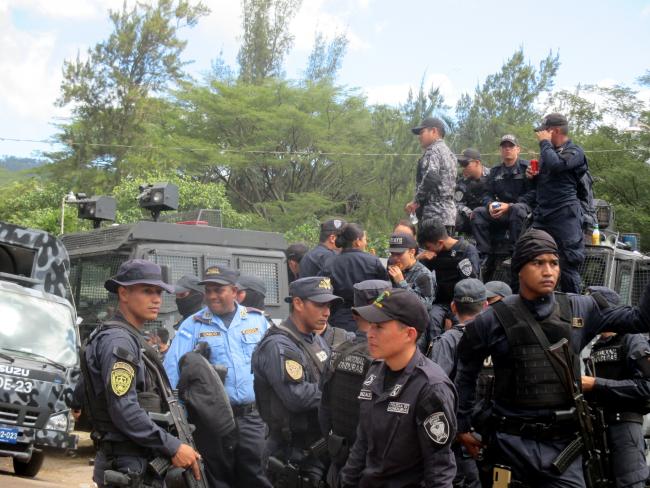 Regardless of whether or not there are further developments among rank-and-file law enforcement officers, Ismael Moreno, the director of the Reflection, Investigation and Communication Team (ERIC) and of Radio Progreso, cautions against placing much hope in the police actions.

“The rebellion of entities that have to do with force and repression in the country is good news, and how we wish that would happen, because a regime like the current one cannot sustain itself without using coercion, without using force,” Moreno said at a December 6 press conference regarding recent human rights violations.

Rebellions among security forces are welcome, but they can’t be relied upon, Moreno said. Cobras, Tigres, and national police—along with the armed forces, including the military police—have all been caught up in corruption and other scandals, and have been denounced by human rights and social movement organizations for involvement in a myriad of human rights violations over the years.

Even after the police action, the Movement for Dignity and Justice (MADJ) reported that security forces including Cobras and military police engaged in an illegal raid. They showed up December 8 to a MADJ property in the northern Atlántida department looking for the group’s general coordinator, Martín Fernández, who has been illegally detained by police in the past and faces ongoing intimidation. MADJ also reported that state security forces searched the homes of group members on December 7 under the pretext of searching for weapons, and that they have been harassing locals in the area.

Honduran organizations have also reported that the national police force continue to be involved in violent repression against protests. On December 12, police and military forces cracked down on a road blockade near the northwestern city of El Progreso, using tear gas and arrests to disperse protesters. They also opened fire with live rounds, according to both the Social and Popular Movement Platform of Honduras and Moreno.

“It’s not going to be any force beyond us that’s going to safeguard our own lives or our own struggles. If there are rebellions, they’re welcome, but let’s not put our energy and much less our hopes into entities and forces that don’t coincide with our own,” Moreno said.

Sandra Cuffe is a freelance journalist based in Honduras. You can find her on twitter at @Sandra_Cuffe or read more of her work on her website at sandracuffe.com.