Since its origins, Venezuela’s oil economy has failed to address the environmental consequences of oil production and resource extraction. 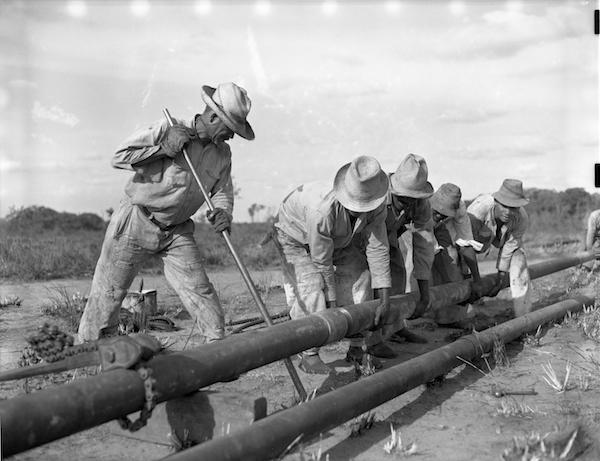 Oil flows through the veins of Venezuela, accounting for 95% of exports. It dominates national politics and influences foreign representations of the country, as it has since its first discovery. Extensive studies on oil in Venezuela deal with either the scientific and technical aspects of production or the political, economic, and—more recently—the cultural and social conditions generated by the industry. Yet despite the oil industry's prominence in the national political discourse, its environmental consequences have received limited attention.

Throughout Venezuelan statehood, oil production has generated tremendous expectations for elites who controlled the state and the middle classes hoping to attain power. Oil means progress. In the 1920s, government publications regularly alluded to the impending transformation that Venezuela would experience as British and U.S. oil companies’ uncovered new deposits. The uncritical acceptance of this narrative by those in power, and those hoping to gain power, muted criticism of the dramatic environmental consequences that the industry generated in Venezuela. As importantly, the connection between oil, modernity, and the nation of Venezuela influenced how certain segments of society fashioned their identity.

Discovery and Destruction: The Early Era of Oil

Venezuela formally entered the era of commercial oil production in 1914 with the discovery of petroleum deposits in Mene Grande in the western state of Zulia. Eight years later, in December 1922, the dramatic reventón (blowout) of the Barroso II well at La Rosa spouted 100,000 barrels a day on the shores of Lake Maracaibo. The gusher confirmed Venezuela as the new epicenter of world oil production. By the 1930s, the country was among the world's leading exporters of crude. Within a few years, it had also become a net importer of food as the countryside emptied of people, who migrated to the cities and oil camps in search of higher wages. Facing this new reality, several intellectuals proposed to “sembrar el petróleo,” (sow oil's wealth) and develop alternatives to the economy's dependency on petroleum. Although reformers and radicals alike have promoted similar policies ever since, the reality is that Venezuela continues to depend on oil. Today, over 90 percent of the population lives in urban areas.

The development of the oil industry in western Venezuela served as a harbinger of the political and environmental challenges the country confronted. In 1908, Juan Vicente Gómez (1908-1935) seized power from Cipriano Castro (1899-1908) who had clashed previously with the U.S. and the oil companies. The U.S. government and the foreign oil companies supported Gómez, which in return allowed them to engage in unbridled oil exploration. To establish operations, Venezuelan Oil Concessions, the Caribbean Petroleum Company and the Mene Grande Oil Company (subsequently part of Shell Oil) and Lago Petroleum (Standard Oil) cleared brush, sprayed crude on wetlands to control insects, drained swamps, and filled in large sections of the lake. Operating at a frenzied pace, drilling crews perforated the earth's surface at hundreds of sites, tapping into petroleum deposits on the eastern lakeshore, eventually drilling on Lake Maracaibo itself. British and U.S. companies had no incentive to preserve the surrounding environment, much less manage the long-term life of a well; rather they exploited oil deposits with an eye towards maximum profit. A U.S. presidential report in 1952 indicated that in Venezuela “the average rate of production per well over a period of years has been close to 200 barrels per day, compared with an average rate of 12 barrels per day in the United States.” If the environment proved expendable, so did workers: deaths and industrial accidents occurred regularly.

In little more than a decade, the physical environment around the lake was transformed. Sites of oil production attracted hundreds of foreigners and thousands of Venezuelan laborers from neighboring states. Oil derricks, fences, pipes, steel tanks, and piers displaced the once placid villages around Lake Maracaibo, which had previously relied on fishing and farming. Residents complained of oil wells adjacent to their homes, recurrent explosions and fires, the constant smell of gas that permeated the air, and the crude oil that contaminated the land and soiled their clothing.