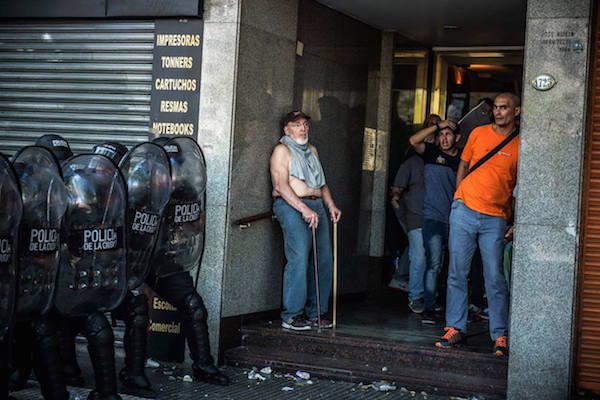 Mass mobilizations broke out in Argentina over the last two weeks of 2017 following a government attempt to cut pension benefits. Unions, political parties, and student organizations took to the streets to protest the austerity measures and resist the battering of the police.

The bill, presented in Congress by Argentina’s ruling coalition Cambiemos (“Let’s Change”), seeks to reduce spending on social security by $3.4 billion. This will mean reducing benefits for 17 million retirees, people with disabilities, and families receiving welfare.

Cambiemos’ successes have undercut Peronism, the country’s main ruling party for the past 35 years, since the end of the country’s military dictatorship in 1983. Peronism encompasses a wide spectrum of politicians (from right-wing to center-left), including the previous administrations of Néstor Kirchner (2003-2007) and Cristina Fernández de Kirchner (2007-2015), and their followers.

In the October congressional elections, Cambiemos performed better than expected, even winning the so-called “mother of all battles,” the elections in the Province of Buenos Aires. The Peronist movement arrived to the elections fragmented and weakened, and suffered unambiguous defeat throughout the country. Most importantly, former president Cristina Fernández de Kirchner (CFK) came in second in the race for senator for the Province of Buenos Aires, losing to Cambiemos’ candidate Esteban Bullrich—though both were elected to the Senate due to the country’s proportional representation system. Yet CFK’s aspirations to unite the different wings of Peronism behind her leadership floundered with her lackluster performance.

After the electoral boost in legitimacy for Cambiemos, and with Peronism in disarray, President Mauricio Macri moved forward in advancing certain reforms he deems necessary for a reinvigoration of the economy. His government has enjoyed a tenuous economic recovery this year, though it has been heavily dependent on increasing foreign debt. A recent report by the Economic Commission for Latin America and the Caribbean (ECLAC) shows a spike in public debt issued across Latin America in 2017. Argentina topped the list with 28 percent of this total debt region-wide.

From Macri’s business-oriented perspective, Argentina needs to reduce its labor costs to recover “competitiveness,” to cut public spending, and to lower taxes on businesses. This would allow the government to cease its reliance on foreign debt. These were among the policies recommended by the International Monetary Fund (IMF) during its last visit to Argentina, only a week after the congressional elections.

Shortly after the October 22 elections, the administration proposed a labor reform on October 30 that sparked a hefty opposition not only from the more militant unions, but also from a wing within the thoroughly bureaucratic General Labor Federation (CGT), the largest labor federation in Argentina with over two million members. The disagreement within the labor federation jeopardized the bill, and debate in Congress has been tabled until later this year.

Preying on the Weak

It seems that Macri’s government seeks to follow the IMF’s agenda to the letter. One such measure, approved on December 19, seeks to cut government spending on social security. The constituencies affected by the slash on social security, or pension reform, do not have the same mobilization capacity that organized labor can boast. In effect, this strategy preys on the weakest communities of Argentina.

The pension reform affects 17 million retirees and beneficiaries of the family welfare program Asignación Universal por Hijo (AUH), a conditional cash transfer program for low-income families with children. The bill puts in place a new method to adjust pensions for inflation, which substantially reduced the final income its beneficiaries receive. This formula would reduce biannual pension increases from 12 percent to 5.7 percent. The inflation rate has risen over 20 percent annually for the past 7 years, and it reached 40 percent in 2016.

In Latin America, income inequality has been linked to worse health indicators. As has been documented elsewhere, austerity policies recommended by the IMF have in the past had direct negative impacts on the population’s health and wellbeing. This pension reform that will reduce the minimum income for retired people, currently, at a meager $404 USD per month, provides a clear example.

The pension bill was quickly approved by the Senate on November 29 and moved to the Lower House. Since Cambiemos does not have a majority in either of the Houses in Congress, the vote of 25 Peronist senators in favor of the bill proved key to its passage. Cambiemos had ostensibly garnered the support of enough Peronists in the lower House of Deputies to convert the bill into law, before things took an unexpected turn. To understand this, we need to step back and look at where pension reform fits into the larger puzzle of Argentinian politics.

In late November, the governors of 23 provinces—all but one—signed a fiscal agreement with the federal government in which they committed to reduce taxes on businesses and freeze public spending. In the same accord, these governors committed to secure support for the pension reform bill from the congressional representatives of these provinces. In doing so, they effectively blurred any division between executive and legislative powers. In exchange, the federal government would not reduce the provinces’ share of revenue coming from income taxes.

The fiscal agreement finally settled an increasingly pressing dispute among provinces over federal revenue funds. In this rearrangement, the government of Buenos Aires will be benefitted the most: the federal contribution to this province is estimated to increase by $3.4 billion next year.

The fiscal agreements also features significant cuts to Social Security. In fact, the funds allotted to the National Agency for Social Security (ANSES) will decrease by approximately $3.4 billion in the Province of Buenos Aires. These cuts represent a direct transfer of revenue from retirees, disabled, and poor families on welfare to the government of the Province of Buenos Aires, home to 16 million residents. The funds bound for Buenos Aires are earmarked for infrastructure investment in the economically-depressed metropolitan area.

With the blessing of a large section of Peronists in Congress, the plan to cut social security seemed to run smoothly, insulated from popular dissent. However, when the bill was brought to the floor on December 14, support in the House of Deputies withered drastically. Mass mobilizations by unions, student organizations and political forces descended upon the session. A simmering tension became outright scandal when a heavily militarized police force attacked the protesters with rubber bullets and tear gas: the Plaza del Congreso turned into a battlefield.

Due to this interruption, the session was postponed for the following week. On Monday, December 18, tens of thousands gathered again at the Plaza del Congreso to protest the passage of the bill. Several unions rallied in front of Congress, while the CGT called a general strike—although they announced the strike with only one hour in advance and discouraged their members from mobilizing.

Around noon, several thousand people packed the Plaza del Congreso and overflowed the Avenida de Mayo and other streets adjacent to the square. The police cracked down on protesters, leaving dozens of injured and over 60 people arrested. Protesters responded hurling stones at the cops, and a battle on the streets ensued again.

In the evening, groups of people spontaneously took to the streets throughout the city to express discontent banging pots and pans. These cacerolazos, a typical protest manifestation in Argentina, mushroomed across neighborhoods in several cities in the country, including La Plata, Rosario, and Córdoba. Despite this, the bill passed in the early morning on Tuesday, December 19, when most of the country was asleep.

Leaders of the ruling coalition justified the passing of the immensely unpopular bill by claiming the protests outside Congress were tied to a conspiracy of a minority against a democratic process. Elisa Carrió, a prominent Cambiemos congresswoman in Buenos Aires even talked about a coup. The mainstream media readily joined in the chorus against violent protesters. 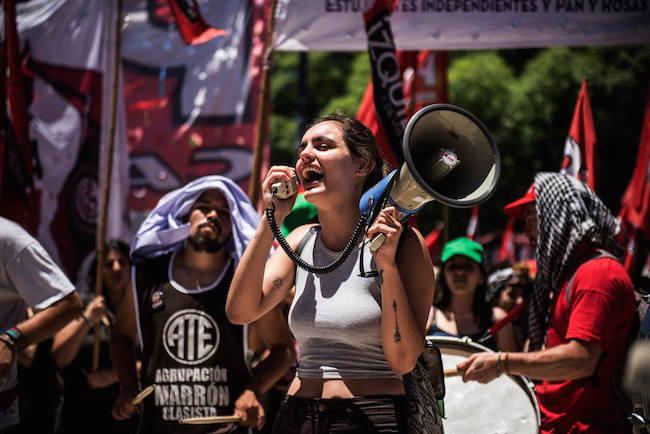 Representatives in the House of Deputies belonging to the Frente Para la Victoria (Victory Front, FPV), the party founded by the Kirchners, opposed the bill en bloc. However, this opposition rang hollow after several FPV senators voted for the bill in the Senate. Furthermore, governors within the FPV coalition such as Alicia Kirchner, sister of the late Néstor Kirchner, signed the fiscal agreement that cut pensions in exchange for stable income tax revenue. Lastly, 2015 FPV presidential candidate and current legislator, Daniel Scioli skipped the sessions in the House of Deputies, igniting a wave of repudiation on social media.

Frente de Izquierda y los Trabajadores (Left and Workers Front, FIT) Congressman Nicolas del Caño denounced the repression on the streets, calling the bill a “pillage” on retirees and the poor. As the main political force opposing the bill both in Congress and on the streets, del Caño challenged Cambiemos representatives to hold a referendum to assess popular support for the pension reform. His strategy was clear: the very few surveys on the issue have shown popular opposition to the pension reform of 82 percent to 85 percent.

In August, Macri’s Chief of Ministers, Marcos Peña, aware of the unpopularity of the measure, had publicly denied the possibility of implementing any sort of pension reform. Even when the proposal entered Congress, government spokespeople made an effort to conceal the real effect of the measure: the reduction in pension benefits. Cambiemos officials know they need to sugarcoat their regressive policies if they want to remain in power.

A new brand of neoliberalism?

After the primary congressional elections in August this year, political analysts of various sympathies tried to make sense of the unexpectedly solid victory of the ruling Cambiemos. Le Monde Diplomatique editor José Natanson argued that Macri’s brand of neoliberalism was of a new kind: democratic, renewed, and committed to maintaining the pension and welfare benefits expanded under the Kirchners. At least, that was the message of their electoral campaign. Natanson claimed that Cambiemos represented a “powerful force in transition to building a new hegemony.” Macri’s gradualist economic policy, he asserted, provided solid ground for governability.

In spite of its rhetoric, the material dimension of Cambiemos’ political project is no softer than any other form of neoliberal economic policy. As political analyst Fernando Rosso points out, Macri’s program demands a frontal attack on the working class, including its economically inactive components, the lower strata and the reserve army—retirees, unemployed, poor families on welfare, etc.

When it came to pension reform, this seemingly gentler mask was removed. The popular backlash in the wake of the reform bill laid bare the narrow social base for Macri’s political project. The battle around the pension reform precipitated many political realignments, including a splintering of the CGT. Cambiemos’ short-lived “hegemony” gave way to blunt repression in the streets and an anti-democratic Congress voting against its people.

Juan Cruz Ferre is a political activist and MD from Argentina currently pursuing a PhD in Sociology at the City University of New York. He writes regularly for Left Voice.