The Quinoa Boom Goes Bust in the Andes

The quinoa boom was an opportunity for farmers in the Andes to make profits from their crops. But the incurison of large-scale farms outside the Andean highlands into the market dashed these dreams. 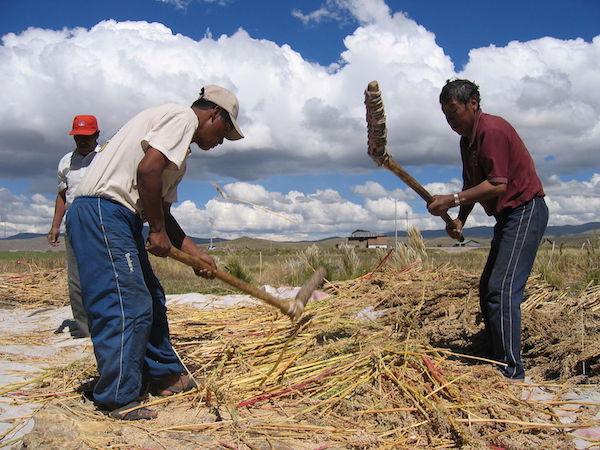 Between 2005 and 2013, quinoa exports from the world’s leading quinoa-producing countries, Peru and Bolivia, increased seven-fold. During this same period, quinoa’s price surged by 600%. Quinoa, the Andean “super grain,” took consumer markets by storm. Long denigrated in South America as an “indian food” that marked its consumers as poor, quinoa was virtually unknown beyond the Andean highlands before it transformed into a coveted fashion food and dietary staple found on the dinner tables of health-conscious eaters across the United States, Europe, and Asia.

As quinoa gained international attention, so too did the phenomena of the quinoa boom. Major international news outlets ran stories about the complex nutritional politics that it set in motion with titles like “Can Vegans Stomach the Unpalatable Truth About Quinoa?” and “Quinoa’s Global Success Creates Local Quandary.” The New York Times’ 2011 article lamented that, due to the price spike, quinoa farmers were selling their quinoa rather than eating it—buying substitutes like cheap noodles and rice with the money they had earned. The Guardian ran a similar story in 2013 that highlighted problems that quinoa’s sudden demand had created for consumers in Andean countries. NACLA’s Nancy Romer offered a piece in early 2015 outlining the sustainability challenge the boom provoked. Though the complex dynamics the boom set in motion have received ample and deserved media attention, the inevitable bust that followed has gone unnoticed in international media, and brings up important questions about the wisdom of commercializing indigenous foods as a development strategy.

From Boom to Bust

The “quinoa boom” lasted about three years, starting around 2011 and peaking in late 2014. While quinoa’s export demand had begun increasing a few years prior, this bonanza period saw the windfall profits and new fortunes that characterize commodity booms. This was an exciting time for small farmers in the Andean highlands, many of who had previously farmed primarily to feed their families and to gather occasional supplementary cash earnings, while other family members worked away from the farm to provide a stable monetary income.

The harsh highland climate of the region had long prevented farmers from cultivating lucrative crops, leaving them to grow a handful of mostly native crops adapted to the environment, such as quinoa, kañiwa, oca, potatoes, and ulloco. These highland crops have historically fetched incredibly low prices, yet remain important parts of the production and consumption rituals integral to daily life for Andean people. In 2000, farmers sold a pound of quinoa for less than $0.25 USD. When quinoa, a native crop often disparaged by urban Bolivians as “chicken scratch” or “comida de pobres” (food for the poor), came into demand in the U.S. and began selling for double, triple, and eventually, six times what farmers were accustomed to at up to $4 USD per pound, people saw renewed hope in the campo. It was opportunity for these farmers to envision a future where they earned a livable income and could improve their material conditions. I met dozens of highland farmers in both Peru and Bolivia who had used their profits from the quinoa boom to send their children to university, invest in new motorcycles and cars, build new houses, and buy farming technology to increase their harvests.

But the euphoria for small-scale farmers was short-lived. As with many commodity booms, the late 2014 peak in prices plummeted back to $0.60, where it currently stands. Though it is hard to say who is to blame, a few things are certain. First, quinoa’s attractive price had led large-scale farmers along Peru’s coast to begin replacing rice, asparagus, and other commodity crops with quinoa during the 2013 and 2014 seasons. As a result, Peru’s national-level production surged, with coastal production increasing from 1,603 to 45,270 tons and national production from 44,046 to 114,342 tons over that same period. The United Nations’ declaration of 2013 as the International Year of Quinoa, launching a yearlong series of events in over fifteen countries that sought to promote quinoa consumption and production across the world, and further encouraged increased quinoa production. Commercial quinoa production commenced in Italy, India, and China and increased in nations that already had small-scale, primarily experimental production, such as the United States and Canada.

This glut of new quinoa producers entering the market differed markedly from the small-scale highland farmers in important ways. Most were market-oriented farmers with access to capital and technology that allowed them to take advantage of risky new markets, and ensured low labor costs and high yields. Moreover, they were producing quinoa in low-altitude regions with conditions amenable to capital-intensive agricultural production. Even with quinoa’s global popularity on the rise, production overshot demand, and as a result, prices fell.

While Andean small farmers had previously monopolized quinoa production, the bust left them unable to compete in an ever more crowded market against producers with access to technology, capital, and credit, and geographical advantage. For example, farmers in Peru’s coastal region of Arequipa boasted two harvests per year totaling 6,000 kg per hectare yields, whereas highland farmers see yields between 700 kg per hectare and 1,100 kg per hectare annually. The quinoa bust crushed the dreams of countless highland farmers, leaving them frustrated, demoralized, and without options. The quinoa boom-bust provides yet another case study of the barbarities of global capitalist markets and the particular vulnerability it causes small farmers attempting to have a stake in it.

Currently, multiple efforts are beginning to “re-territorialize” quinoa in the Andes. Bolivia is spearheading a protected Geographic Indication for “Quinoa Real,” a kind of quinoa produced exclusively in Southern Bolivia, to protect quinoa in certain regions of the country as distinct from all other quinoa. This would function much like the Geographic Indication that protects Champagne and Tequila, and thereby prevent producers from outside the prescribed region from using the name on their packaging. Simultaneously, efforts in Puno, Peru are in the works to create a collective brand for the region’s quinoa while a broader effort that seeks to develop a pan-Andean collective brand that would differentiate quinoa grown in the Andes from other quinoa is in its incipient phases. These efforts seek to leverage growing markets for place-based foods–linking quinoa to a specific place and differentiating it from quinoa produced in other regions in order to increase its value.

Rethinking the Commercialization of “Superfoods”

The quinoa boom-bust trajectory also challenges the wisdom of commercializing so-called “traditional crops” as a sustainable development strategy. The commercialization of traditional crops is increasingly promoted as a culturally sensitive agricultural development strategy—a move that transforms cultural difference from being perceived as an impediment to development into an asset, and thereby effectively refashions indigeneity for capitalism consumption in the “modern world.” Diverse groups, including the UN Food and Agriculture Organization (FAO), Biodiversity International, the International Foundation for Agricultural Development (IFAD), and the World Bank, now promote the development of markets for “underutilized and neglected species” (NUS), from quinoa in the Andes to millet in India as means to alleviate poverty and increase diversity in the global food system. As a recent Biodiversity International document demonstrates, NUS are increasingly heralded as a panacea to development obstacles: “NUS present tremendous opportunities for fighting poverty, hunger and malnutrition. And they can help make agricultural production systems more resilient to climate change.”

Not least, acknowledgment of the value of NUS in traditional foods and cultures can empower indigenous communities (women in particular) and reaffirm their identity. This is in some ways a welcome trend after decades of development policy that imposed the production of commodity crops often ill fit for the environmental and social conditions of small farmers. Yet we must take pause, and consider the ways these sorts of projects interact with fickle global markets.

Although small-scale quinoa farmers benefitted early on from the commercialization of this “underutilized species,” once its price became attractive to non-Andean farmers, there were no institutional mechanisms in place to ensure that small Andean farmers could continue to reap their fair share of the benefits from “sharing” this food with the world.  Instead, farmers with no cultural link to quinoa but with more capital to invest and larger, more productive farms are now outcompeting the small farmers in the Andes that quinoa’s commercialization initially had the potential to benefit.

While it is unlikely that all NUS-designated foods will follow the same trajectory as quinoa and gain extreme popularity among distant consumers, the increasing demand for novel “superfoods” puts all exotic, healthy foods at risk to this dynamic. Currently in Peru, a number of traditional crops including maca root, kañiwa, kiwicha, and camu camu berries are being pushed in global markets under the pretense that local farmers will benefit. Yet it seems unlikely these efforts will benefit small farmers in the long run, particularly if they are “successful” in consumer markets, and other producers of more means take an interest in growing them. Before promoting traditional food commercialization as an economic development tool, sufficient institutional mechanisms must be put in place to protect small farmers in these situations and ensure that they retain some control over the product, after the initial boom.

While Geographic Indications have worked well in Europe, it remains to be seen how well such policy mechanisms will work in the Global South, where there are few successful examples led by small farmers. Both tequila and Darjeeling tea present examples of “successful” Geographic Indications outside Europe and North America, but have not resulted in the benefits to small producers initially sought. Even with regulations within the Geographic Indication focusing on protecting “traditional” production, we see actors representing large-scale operations and plantation-style agriculture capturing the rule-making processes, and as a result, thriving in both of these contexts. The next few years will show whether quinoa, as a Geographic Indication from the Global South, can be developed in a way that benefits small-scale farmers—or if outside interests again take over the market.

Emma McDonell is a Ph.D. Candidate in the Anthropology Department at Indiana University. She spent 16 months conducting ethnographic fieldwork among quinoa farmers and other actors involved in the quinoa industry in Puno, Peru between 2014 and 2017. This research is part of her doctoral dissertation, which explores the cultural politics of the quinoa boom-bust and collective action efforts to save Puno’s quinoa industry.