As Chile’s president-elect Sebastian Piñera promises to perfect its anti-terrorist laws, repression against the Mapuche people seems likely to increase during his second presidential term. 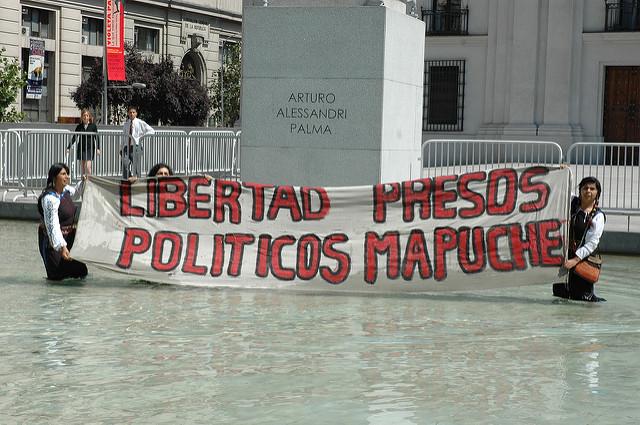 Chile’s president-elect, Sebastian Piñera of the right-wing party Renovación Nacional (National Renewal, RN) recently announced that he plans to “modernize” the country’s Anti-Terrorist Law when he takes office. This announcement builds on promises from throughout his 2017 Chilean electoral campaign, when Piñera said on multiple occasions that his new aministration would seek to perfect the law, which dates back to the Augusto Pinochet dictatorship and allows authorities to detain suspects without bail. This law has been used to target activists, particularly the Mapuche, Chile’s Indigenous population of around 1.5 million people. The likely revamping of this law, after Piñera takes office on March 11, has worrisome implications for the increased repression of the Mapuche.

Recent raids by the Chilean police have left Mapuche communities vulnerable, injured, and concerned about future policy toward them. As Ana Piquer, director of Amnesty International told Al Jazeera in January: “It affects the whole community…They arrive violently; they raid every house, throw tear gas...In one recent case, a pre-school with little children were all affected and had to be taken to hospital.”

Such events are not new—since Chile’s return to democracy in 1990, successive governments regardless of party have drawn on the Anti-Terrorist Law, which was enacted in 1984, to target the Mapuche.  These laws allow for longer periods of detention without charge, the interception of correspondence and communication, the use of secret evidence and faceless witnesses in court, which removes the right to cross-examination. The case of Mapuche spiritual leader Francisca Linconao, who was charged under the Anti-Terrorist Law in 2013 for the alleged murder of two landlords in Vilcun by arson, garnered much attention in 2017. Last November 2017, the city of Temuco’s Criminal Acourt acquitted Linconao and 11 other detained Mapuche activists due to lack of evidence. Piñera’s recent comments suggest that an updated version of the law would also increase surveillance capabilities.

Chile’s right-wing media frequently refer to Mapuche leaders like Hector Llaitul, a founder of the resistance group Conflicto Arauco-Malleco (CAM), as terrorists. CAM operates under the auspices of secrecy and advocates for Mapuche autonomy. They are currently engaged in a sabotage campaign against the forestry industry in resistance to exploitation of Mapuche land. The anti-terrorist laws could be easily wielded against them.

A week after Piñera was elected, La Tercera—one of Chile’s highest circulating newspapers—quoted RN Senator Alberto Espina, who noted three main objectives under the new administration in terms of the Mapuche: the creation of a program to enhance social and economic growth in the Araucanía region, the heart of Mapuche resistance; a firm stance against “violent groups and terrorists;” and recognition of the traditions and culture of the indigenous Mapuche population.

The second goal, which would increase the criminalization of Mapuche resistance, is the most concerning part of these proposals. Given his electoral promises to refine the Anti-Terrorist Law, Piñera may take a stronger stance against the Mapuche than he did in his first presidency.

The oppression of the Mapuche has been a constant reality in Chilean history. The Mapuche suffered massacres at the hands of Spanish colonizers, and when Chile declared its independence, the nascent Chilean state expelled the Mapuche from their ancestral territory. During the “Pacification of Araucanía” between 1860 and 1885, over 100,000 Mapuche people were slaughtered. The dictatorship of Augusto Pinochet sought to assimilate the Mapuche within the Chilean state as a way of eliminating their territorial claims. In this vein, he withdrew recognition of the Mapuche as an Indigenous population in order to emphasize their Chilean identity. He expropriated Indigenous territory, eliminating communal use of land and transferring it to forestry companies.

But it is important to note that repressive practices toward the Mapuche people have continued since the democratic transition, under governments from both of Chile’s main parties, including both Michelle Bachelet’s outgoing center-left Concertación (Agreement) government and the previous leadership of Piñera from 2010-2014. In a Facebook post republished in El Ciudadano late last year, Mapuche journalist Pedro Cayuqueo declared that a government under the right-wing Piñera would not be so different from previous Concertación governments, even though they purported softer stances toward the Mapuche.

In a recent interview, Cayuqueo insisted that the conflict will grow if the new government insists on a contradictory approach that involves contempt for negotiation and political dialogue. He explained: “What we have had until now is state welfare and repression by the Ministry of Social Development and the Interior Ministry, which has only contributed to the worsening of the conflict.” State policy has exploited and allocated Mapuche land, leaving the community deeply impoverished. As the government talks about creating opportunities in the Araucanía region for the Mapuche population, they favor companies over Mapuche autonomy and land rights, making self-determination impossible.

Despite claims of enhancing economic growth in Araucanía, Piñera’s government may also delay or cancel financial reparations and restored land rights for historic violence committed by the Chilean state against the Mapuche. In June 2017, President Michelle Bachelet issued a formal apology to the Mapuche. Quoted in TeleSUR English, Bachelet said, “I want, solemnly and with humility, to ask for forgiveness from the Mapuche people for the errors and horrors committed or tolerated by the state in our relation with them and their communities.”

In her speech, Bachelet also promised to restore basic rights and restitute ancestral territory to the Mapuche. Bachelet’s plan, the Araucanía Law, consists of 12 specific targets to protect Indigenous rights. Among its proposals, it calls for a commission for reparations of Mapuche victims of violence in the Araucanía region, as well as a special commission for Indigenous lands, and constitutional recognition of the Mapuche. The government stopped short of repudiating its anti-terrorist laws, which disproportionately criminalize Mapuche resistance.

But as Bachelet’s political rhetoric seemed targeted toward reconciliation, four Mapuche activists accused of an arson attack on a church in Padre Las Casas were being held without charge and went on a hunger strike. The hunger strike lasted 118 days, ending in October, after the government announced it would not prosecute the detained Mapuche activists under the Anti-Terrorist Law.

Around the same time, the government carried out Operation Huracán—a police initiative against alleged arson attacks by Mapuche activists from CAM. Llaitul was interviewed hours before being arrested in the raid. Referring to the prolonged detention without charge which detained Mapuche activists frequently endure, Llaitul reminded viewers that Bachelet had promised that the Anti-Terrorist Law would not be applied to the Mapuche anymore but had reneged on her promise. Yet as Chile continues to follow the neoliberal model that prioritizes profit through industrialization, Mapuche communities are left vulnerable when it comes to the provision of basic necessities, let alone rights.

In an interview with NACLA, Mapuche activist Rafael Railaf explained some of these dynamics: “During Bachelet’s presidency we didn’t have much support from the left wing in Chile. Now that the Left is in the opposition again, we expect that we will get more support to create a front against Piñera,” he said. “When they control the government, the Left is passive…[but] now that they are in opposition, they will need the Mapuche movement again.”

Railaf also expects that Piñera will increase coordination with Argentina’s president Mauricio Macri, perhaps including when it comes to targeting Mapuche. The mysterious disappearance and death of pro-Mapuche activist Santiago Maldonado last year is just one example of Argentina’s own repression of its Mapuche population. In fact, the only police officer indicted in Maldonado’s murder and disappearance received a promotion.

Chile operates with similar tactics, withholding justice and treating crimes against Indigenous activists with impunity. On January 10, the Chilean organization Comisión Funa held a demonstration in support of Mapuche teenager Brandon Hernández Huentecol, who was shot in the back by a police officer in 2016 in Carehue, a town in the Cautin province in southern Chile, following a police beating of his younger brother. Over 100 pellets were found in Hernández’s body. His recovery was lengthy, following 16 operations and physical therapy. But 30 bullets remain lodged in his body, and his aggressor has not been charged with any crime.

Another example of such mistreatment occurred during a demonstration in remembrance of the 10th anniversary of the killing of Mapuche Matias Catrileo on January 4, when Bachelet’s government initiated a harsh crackdown on demonstrators. Catrileo was assassinated on January 3, 2008 during a protest for land reclamation in Vilcun in the Araucania Region. His killer, police officer Walter Ramirez Inostroza, was sentenced to a mere three years in prison.

On the bright side, there are some signs of increased representation of Mapuche in the government. Two Mapuche were elected to Chile’s Congress in the 2017 election—Emilia Nuyado and Aracely Lauquen from the Partido Socialista (Socialist Party) and RN respectively, as well as the senator Francisco Huenchumilla from the Christian Democratic Party. It was the first time a Mapuche was elected to public office since 1973. Railaf expressed cautious optimism about the potential for change under elected Mapuche officials. “If Mapuche representatives get a fair chance, they could make a difference,” he said. “They understand their people and that’s important for the issues of land grabbing and pollution in our territories.”

Against the grain of history and the challenge of another Piñera presidency, it will be an uphill battle.