The Venezuelan Opposition Could Win the Elections. Why are they Boycotting?

As elections in Venezuela approach in May, major swaths of the opposition are boycotting, as the possibility of armed intervention by neighboring countries looms. 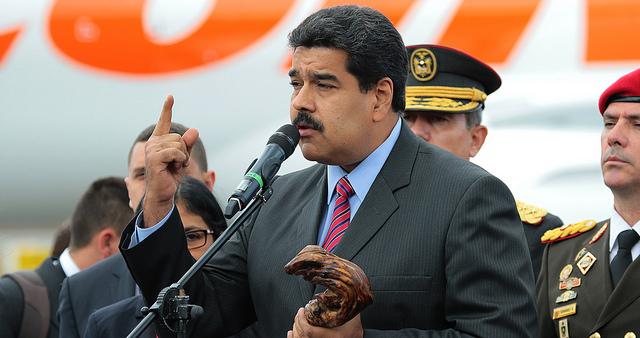 Presidential elections will take place in Venezuela on May 20, and the opposition has decided to boycott. Their spokespeople argue that “null conditions for equal participation,” “a stacked deck in Maduro’s favor,” and “non-neutral arbitration” mean the elections will be illegitimate. For its part, Chavistas denounce what they say is an international offensive against Venezuela that is seeking a military intervention.

To be sure, President Maduro, his military allies, and Chavismo’s legal framework have responded forcefully to proposals of various stripes by the opposition. In 2016, the Chavista-controlled Supreme Court declared the opposition-led National Assembly “in contempt” after it instated three legislators who had been disqualified from holding office due to allegations of vote-buying. Later, the opposition organized to hold a recall referendum, but the National Electoral Council (CNE) put a stop to it due to “flaws in signature collection.” Amid the street violence (guarimba) of 2017, Venezuela’s comptroller disqualified the most widely-accepted opposition leader, Henrique Capriles Radonski, from running for any office, due to allegedly illicit administrative practices.

Last year, President Nicolás Maduro convened a National Constituent Assembly after a contested vote with power over all other public offices and institutions, thus making any new government subject to an iron corset that will prevent it from acting freely until its term expires in 2020. Finally, the Primera Justicia (Justice First) party, one of the most important opposition parties, was deemed “invalid” by the CNE because it did not meet certain “technical requirements” in the signature collection process to put its candidate on the ballot.

In terms of the election itself, various leaders and parties in the opposition could snatch a victory from Chavismo. According to surveys, Maduro, as to be expected in the midst of a deep economic crisis, faces significant disapproval. In 2013, just weeks after Hugo Chávez’s death, opposition candidate Henrique Capriles cut the difference with Chavismo by nearly two million votes, losing by less than two points to Maduro–a “technical draw,” if we consider previous election results. In 2015, the opposition swept legislative elections with 56% of votes. If the opposition were to participate in a united front, as in the five previous elections, there would be no mathematical variable capable of predicting a Chavista win under the current circumstances. Even so, the opposition has decided to boycott the presidential election without making their strategy from here on out clear.

In the last three elections, abstention rates did not surpass 20%. But now, there seems to be little effort to get out the vote in the primary season, with the election rescheduled from April 22 to May 20, meaning we could expect a higher abstention rate, particularly as the bulk of the opposition and their voters are insisting on non-participation. But this could also produce an opposite result that “legitimizes” Nicolás Maduro’s reelection, as did the Constituent Assembly elections in July 2016: while only Chavistas participated, more than eight million voted—40% of the electorate—according to the CNE (though the figure was widely disputed). At the time, this looked like an important victory that left the opposition very weakened in the context of its call for violence in the streets in early 2017.

So why not try to defeat Chavismo through suffrage, as a step to come before unthinkable extreme action? Presenting Nicolás Maduro as the only weighty candidate raises the possibility that the conflict will escalate to an unprecedented scale.

While a moderate sector of the opposition has backed the candidacy of Henri Falcón, the former governor of Lara state, his nomination lacks support from the hard opposition vote, and is a sign of internal weakness. Falcón, a regional leader who won the governorship three times with the support of both Chavistas and opposition voters—has a Chavista past, which is unforgivable to the opposition leadership. These circumstances mean he cannot be considered a representative candidate. Although some polls place Falcón ahead of Maduro by six points, it will be very difficult for him to win without the hard opposition vote. But if the opposition made a massive showing, as they did in the last round of legislative elections, Falcón would be a strong candidate, because he would likely take a large number of votes from Chavismo.

Leaving this scenario aside—because Falcón has been denied by his own leadership—the anti-Chavista leadership has not clearly outlined its course of actions before or after the upcoming elections. The discourse of its leaders is based in delegitimizing the electoral route without presenting an alternative.

Once the anti-Maduro street demonstrations of 2017 were defeated, ending in dozens of deaths, using popular street demonstrations as a tactic is no longer under serious consideration. Maduro can count on unrestricted support from military forces and police, so it seems clear that this strategy would not topple the government, unless an internal division emerges within the military. Such a scenario would more likely to lead to civil war, because Chavista loyalists in the armed forces would not go down passively. So, it is difficult understand what former Exxon Mobil director Rex Tillerson—in his last journey to Latin America as Secretary of State under the Trump administration—meant when we said that in Venezuela and Latin America “it is the military that takes care of that. When things are so bad that the military leadership realizes that it just can’t serve the citizens anymore, they will manage a peaceful transition.”

Because of the opposition’s inaction, a military intervention by the U.S. and especially its allies in South America appears possible. In early February, as Tillerson was on the aforementioned tour, Brazil and Colombia moved troops towards the Venezuelan border, arguing that massive Venezuelan emigration to their countries had generated a “humanitarian drama” affecting their territories. At the same time, the UN sent the case of the contested border in Esequibo between Venezuela and Guyana to the International Court of Justice – a major defeat for Venezuela’s government–a day before Tillerson’s trip began.

This is how intervention is taking shape: drawn up with neighboring countries—not unlike other recent global conflicts. It could occur via the dismemberment of Venezuela if the International Court of Justice makes a favorable ruling to Guyana, or by betting on the division of the Venezuelan military, or in new street rebellions. And it remains plausible, as Trump himself has said, that the U.S. military could intervene. With the arrival of Mike Pompeo, hawkish former CIA Chief, as Secretary of State, and of John Bolton as the new National Security Adviser to replace H.R. McMaster, such a catastrophic scenario seems increasingly plausible.

Such an extreme possibility—which may nevertheless still fail to oust Chavismo—leads to a parallel scenario. If Maduro scores another electoral triumph, the government could fortify its absolute monopoly over democratic institutions and prepare the legal structure to anchor itself to hold onto power indefinitely. In fact, the National Constituent Assembly requested that the CNE move up elections in the legislature, the only institutional power that the opposition could slow, and whose term ends in 2020. On the other hand, facing the possibility of an oil embargo as outlined by Tillerson, Maduro warned that Venezuela could place its oil in other markets, thus escalating the conflict in all realms.

It is difficult to understand why the opposition leadership has ruled out voting, or to know what their path forward—electoral or insurrectional—will be.The real electoral strength of Chavismo is its organizing and political machinery, which carried approximately six million votes in the last elections in December 2017. But this figure is insufficient to win presidential elections in a country with historically high voter turnout whose electoral universe exceeds 20 million people, of which nearly eight million voted for the opposition in 2015.

Of course, beating Chavismo electorally could still mean ruling over an ungovernable country for a new administration. The president-elect would face off against the National Constituent Assembly, the International Court of Justice, the Armed Forces, and a significant segment of the people, unless they come to conciliatory strategies—something Henri Falcón might achieve. But the radical opposition—many of whom are in exile or in weak political positions due to imprisonment, disqualification, or discredit— dominates public opinion and will not accept a gradual exit without the categorical annihilation of Chavismo.

The reasons for an opposition boycott—in elections that they could win—seems more to follow a line put forth by Trump and his administration than an effective strategy. Yet this would not be the first time it has happened. In 2005 the entire opposition boycotted legislative elections, and Chavismo subsequent total triumph still reverberates across the prevailing legal structure. The inability of the U.S. to undermine Chavismo has led to a return of strategies such as the U.S. followed in Central America during the Cold War, including in Panama. But the internal situation in Venezuela also could have parallels—though distant—with rise of Mexico’s Partido Revolucionario Institucional (PRI), which went on to be hegemonic for 70 years. What’s next?

Ociel Alí López is a sociologist, political analyst, and professor at the Universidad Central de Venezuela. He has won prizes for his book, Dale más gasolina: chavismo, sinfrinismo y burocracia (2015), as well as the CLACSO/ Asdi International Prize for young researchers in 2004.