As Argentina debates a new law to legalize abortion, activists like Sandra Hoyos are rallying for a pro-choice future for the country. 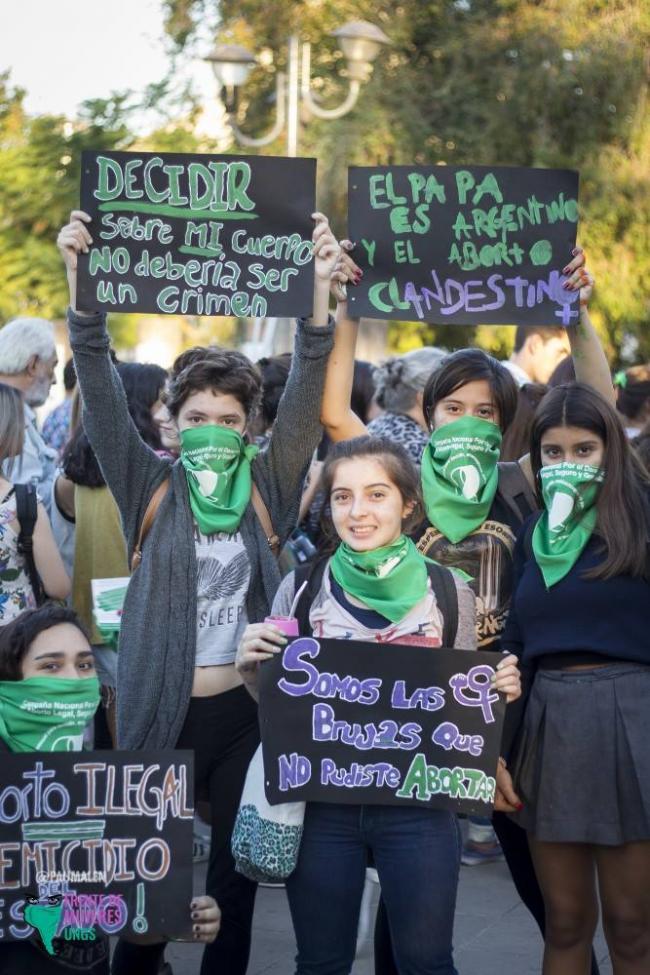 Despite his personal objection to abortion, center-right president Mauricio Macri has allowed for a congressional debate over a proposed bill that would make Argentina the largest country in Latin America to legalize abortion. Since mid-April, Argentina’s Congress has held hearings to legalize abortion at up to 14 weeks. Activists, academics, doctors, actors, lawyers, and family members of the victims of deadly clandestine abortions have given their testimony in live, nationally broadcasted sessions, arguing for and against the measure. Wearing matching green scarves (pañuelos), thousands of activists from the National Campaign have held massive protests in support of the bill in front of the national Congress building.

Over the past 15 years, the National Campaign has presented an abortion bill on six different occasions, failing to reach a vote each time. Former president Cristina Fernández de Kirchner, now a senator in the province of Buenos Aires, remained steadfast in her moral opposition to abortion and for any potential legalization bill despite her overall support of women's issues. Almost 35 years since the return to civilian rule, Argentina has passed some of the most progressive human rights legislation in the world, including the legalization of gay marriage in 2010, rights for trans people to have their gender identity on official documents, and quotas for women serving in political office.

Although resistance to the proposed legislation exists, especially outside of urban centers, an unusual political coalition supports the measure. Representatives from a variety of political parties and fronts including Macri’s Propuesta Republicana (Republican Proposal, PRO), Senator Cristina Kirchner’s coalition Unidad Ciudadana (Citizen’s United), and the Workers’ Socialist Movement support the bill. If the measure were to pass, it would not only grant women the right to abortion, but also become a guaranteed part of their overall right to healthcare under Argentina’s universalized system, making the procedure free of cost. Argentina would join Cuba, Uruguay, Guyana, and certain parts of Mexico as one of the few places offering legal abortions in Latin America. As it stands, the current law in Argentina only allows abortion in cases of rape, incest, and danger to the mother’s life. Several countries in Latin America, including El Salvador and Nicaragua, currently have a total ban on abortion under all circumstances. 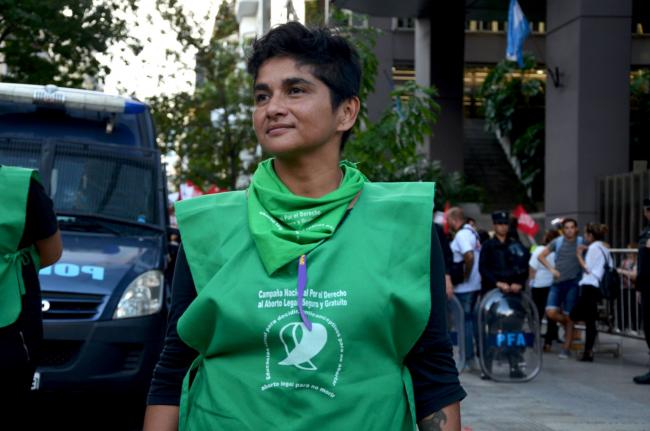 The following interview offers an in-depth conversation with Sandra Hoyos—organizer of the National Campaign for the Right to Legal, Safe, and Free Abortions.

Can you talk a little bit about what it is like for women in Argentina to live without access to safe and legal abortion?

In Argentina, a woman may only get an abortion under certain circumstances: when there is a risk to the woman’s life or when the pregnancy was the result of rape. Outside of these exceptions, it is penalized. In other words, you could face criminal charges for seeking an abortion. Even if a woman falls into one of these outlined exceptions, it is still very difficult to effectively seek a legal abortion because the health system throughout Argentina operates under distinct local criteria and policy. For example, a doctor may have a strong moral objection to abortion and refuse to do the procedure. In most cases, a woman will seek a clandestine abortion and can (technically) face criminal charges for doing so. In fact, there are cases of women who have spent time in prison, such as the case of Belén, who served two years for having a miscarriage.

According to the National Ministry of Health, 500,000 abortions are performed each year in Argentina. To get an abortion, we are forced into darkness, we have to put our own health and wellbeing at risk, we lose autonomy over our bodies and we cannot freely decide to give birth. The actual law as it is currently written forces us into “obligatory maternity” (maternidad obligatoria)—it does not offer the right to access abortion as a form of health care. Seeking a clandestine abortion takes place in many different spaces and with the participation of many different organizations—the majority being feminist. Generally, these organizations will accompany women who are seeking an abortion and provide information on how to abort with the lowest risk. In some cases, these organizations will advise on how to access an abortion in health clinics, or, if not possible, providing strategies on how to abort with Misoprostol [a drug that is prescribed to treat stomach ulcers and can also be used to safely terminate a pregnancy]—the option recommended by the World Health Organization. In all cases, women are forced into hiding.

Many people are surprised that this is the moment in which the legalization of abortion seems like a real possibility, especially under the conservative Macri administration. Why now?

The time for this struggle is now because as feminists, we have put ourselves in charge of making it a part of the public agenda. But this struggle is not only about abortion, it is also a combination of intersecting demands connected by the struggle for our rights. It is also about the need for legislation against gender violence, the increased visibility of femicide, and the need for comprehensive sexual education. Without a doubt, the fight for the legalization of abortion has been strengthened because of these other struggles. This is an issue that has unified many different feminist movements, because the right to abortion is the right to decide what we do with our bodies and lives.

The Argentine feminist movement is the product of the consolidation of many movements. The demand that we are making to the state—the right to abortion—is fundamental because it implies that abortion is part of our [existing] right to health care. Clandestine abortions are a concern of public health and human rights. In this sense, the state owes us answers and solutions.

A liberal government [the Mauricio Macri administration] has opened the door to the debate over abortion. This should not surprise us, because liberalism stands for the individual and granting individual rights. However, the potential for the legalization of abortion was not a governmental initiative; rather, it was the result of sustained pressure that we applied. The only thing that this government has really accomplished was to force us to unify our struggles and to effectively show our strength.

Can you talk about the National Campaign for the Right to Legal, Safe, and Free Abortion?

The National Campaign was founded thirteen years ago. However, its formation was rooted in [earlier] local and international movements.  In 1990, the Encuentro Feminista Latinoamericano (Latin American Feminist Meeting) took place in San Bernardo, Argentina and designated September 28 as the Day of Struggle for the Legalization of Abortion in Latin America and the Caribbean. It was at this meeting that representatives from each country returned to their homes with a clear objective: form assemblies and commissions for the right to abortion. From thereon, the organized struggle for the legalization of abortion had formed and developed in all different kinds of environments from professional organizations to militant feminist movements.

Each year in Argentina, we have the Encuentro Nacional de Mujeres (National Women’s Meetings). This year will be the 33rd meeting. These meetings have been fundamental in strengthening all of our struggles, and in part because of these meetings, we were all able to commit to the issue of the legalization of abortion.

In 2005, the National Campaign began growing throughout Argentina, and we started to strategize about ways in which we would make the demand for legalization while also constructing alternatives for women to seek safe abortions. We have purposed this law [the bill for the legalization of abortion] multiple times in Congress, and it has not progressed. This year, in the context of so many global feminist struggles, the seventh version of the proposed law is being debated in Congress.

The biggest challenge awaiting us, is that they law be approved as it was crafted and written because it is a proposal that was organized from below—from the bottom up. Beyond the approval of the law, we will be designing strategies to guarantee the implementation of legal abortion, because we know that a law is not a comprehensive solution. Beyond a mere law, we need to change the practices and subjectivities of people, especially those in healthcare and the justice systems. We know that there will be many more challenges if this law receives approval, but at the same time we will see our feminist militancy strengthened. We are playing a role in the breakdown of the patriarchal structures that we once accepted but that no longer control our lives.

How do you see men play a role in this movement?

I would say that men play a necessary and fundamental role in this struggle, but they do not necessarily occupy the same places as we—women, lesbians, and trans people—do. Men can deconstruct and question their societal privileges. Men need to support feminism. If not, they will not be able to transform themselves and will continue to reproduce machismo. We encourage men to begin to question themselves and their friends. We want men to abandon their comfortable positions, to look at things from a different angle, and to begin to change.

Finally, what is the significance of the green pañuelos, (the scarves worn by pro-choice activists that have come to represent the movement)?

The green pañuelos (scarves) are the most visible symbol of our struggle. They were created to represent our right to make decisions about our lives. We chose the color green because it is life, because to defend the right to abort is to defend and take care of our lives; it is to love ourselves, it is the desire to take on work, to decide about our motherhood. We wear the pañuelo on our neck, tied to our bags, or worn like a bracelet. It is a way for us to recognize one another, so that we know who we are and that we are part of the same fight.

Sandra Hoyos is a feminist militant and activist. She resides in Gran Bourg, a locality outside of Buenos Aires. She is a teacher, communications specialist, and social psychologist. She is a leader in the National Campaign for the Right to Legal, Safe, and Free Abortion and of the Feminist Group “Las Simonas.” Sandra has recently testified in the congressional hearings in favor of the legalization of abortion. Her testimony can be viewed here.

Claire Branigan is a doctoral student in cultural anthropology at the University of Illinois at Urbana-Champaign. She is conducting research on the politics of gender and violence in Buenos Aires, Argentina.