In the course of less than a month, seven campesino-Indigenous activists were murdered. What explains the onslaught? 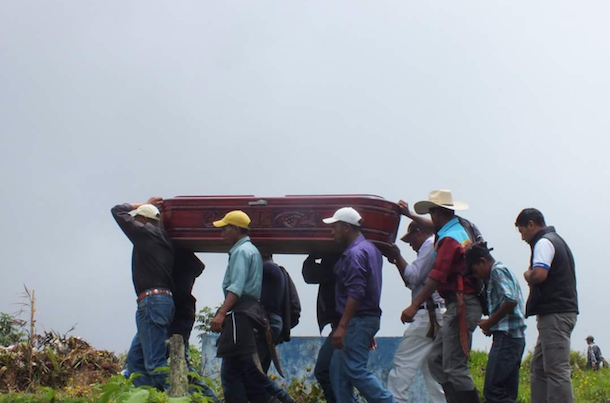 News of each murder hit like a sledgehammer, striking fear into activists across Guatemala. Between May 9 and June 8, seven Guatemalan campesino-Indigenous activists were killed, all members of either the Comité Campesino del Altiplano (Campesino Committee of the Highlands, CCDA) or the Comité de Desarrollo Campesino (Campesino Development Committee, CODECA).

On May 9, Luis Arturo Marroquín, a member of CODECA’s national leadership, was followed throughout the morning by hooded men in a truck who eventually fired at him from the vehicle, killing him with multiple shots to the back. On May 11, gunmen entered the rural village of Choctún Basilia and opened fire. When José Can Xol, a member of the CCDA-allied Maya Q’eqchi’ community, ran to help others who were taking cover, he was shot and killed. Two days later, Mateo Chamán Paau, another Maya Q’eqchi’ member of the CCDA in Alta Verapaz, was shot with a bullet that travelled up his back and exited through his head.

Nearly three weeks passed. Activist groups reported death threats and shootings but no more deaths were recorded. Then came three more murders in the span of six days. Ramón Choc Sacrab, a Maya Q’eqchi’ ancestral authority and CCDA activist from Alta Verapaz, was returning from a protest against the recent murders when he was intercepted by two men. Choc Sacrab was stabbed in the throat and ear, and died the next day. On June 3, CODECA activists Florencio Pérez Nájera and Alejandro Hernández García were abducted in Jutiapa. Their bodies, reportedly mutilated by machetes, were found the next day.

A seventh man was murdered on June 8. Francisco Munguia was a Xinca leader from Jalapa and the CODECA vice president in his community. Once again, he was killed by machete.

Data collected by human rights organizations over the years show a relatively consistent pattern: outside of police or military shootings at protests, one rights defender has been killed in Guatemala every month or two all the way back to 2000. The campesino murders of 2018 obliterate any predictability with shocking violence. Guatemala has not seen anything like this since the official end of its armed conflict in 1996.

Patterns Across the Murders

Even for those who have lived through or observed the long history of violence against human rights defenders since Guatemala’s internal armed conflict, the current assassinations stand out as unprecedented. These recent killings just do not fit the pattern established over two decades of political murder.

The most obvious difference is the short period of time over which the seven men died. According to annual reports produced by the non-governmental Guatemalan Human Rights Defenders Protection Unit (Unidad de Protección a Defensoras y Defensores de Derechos Humanos, UDEFEGUA)—which contain the names of all murdered human rights defenders back to January 2000 and detailed information on murders and attempted murders since 2007—197 Guatemalan rights defenders were killed between 2000 and 2016.* Between 2000 and 2017, somewhere between four and 18 people were killed and included in UDEFEGUA’s lists each year. At no point, however, have so many activist murders taken place in so little time as between May and early June of 2018.

Then there is the uniformity of the victims. Even in years where activist murders have spiked, the people targeted were engaged in a range of activities. For example, the 32 murders between 2014 and 2016 (the three most recent years with available data) targeted 22 different organizations, as well as a number of community leaders without clear organizational affiliations. Many journalists lost their lives, as did Indigenous ancestral authorities, members of communities resisting mines and hydroelectric dams, and a range of other activists. This indicates a generalized scenario of violent repression and impunity, but nothing like 2018’s concentrated attack.

The seven murders do, however, suggest a pattern of their own. First, it seems likely that they were carried out by sicarios, or professional killers. The men were all killed either in targeted shootings within settlements or by knife or machete attacks in rural areas. In all of the cases the killers were described as “unknown assailants,” rather than being identified as members of state forces or private security, or even named as known individuals from the area. Instead, in each case the killers entered an area where a known activist from the CCDA or CODECA organizations was present, murdered an individual, and exited, leaving only a body behind (with the exception of José Can Xol, who died during a shooting apparently directed at other members of a CCDA community). 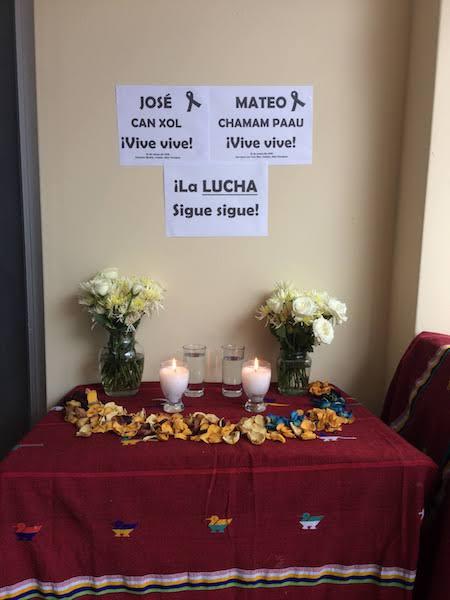 Sicario-style murders of rights defenders have increased over the years, comprising more than half of the killings during the 2014-2016 period. All but three cases in 2016 were carried out by unknown men, often masked, who arrive and depart quickly on motorcycles or in trucks. The fact that four of the seven recent murders were carried out by machete or knife is rare, but it could also indicate a connection across the cases.

Another commonality across some sicario groups involved in activist murders, as far as we know from criminal prosecutions, is their connection to state agents. It is not unusual for active or former police officers to be found within sicario groups, as in the high-profile murder of journalist Danilo López in 2015: a former police detective was found guilty of carrying out the hit as a member of a sicario group, and two other officers were charged with acting as intermediaries between a Guatemalan congressman and the murderers.

There are clear connections between the May-June 2018 murders of campesino-Indigenous activists. The murders are connected at the very least by their proximity in both time and place (three killings in Alta Verapaz, three in Jalapa, two in neighboring Jutiapa). They are connected by the impunity of the moment, when a lack of response from authorities may be encouraging a snowball effect among those who would target the movement. From the facts available at this early stage, they are also connected by a shared sicario style, three using bullets and four using blades. Most importantly, the murders are connected by their victims, all members of two of the most radical campesino-Indigenous organizations in Guatemala.

Why CCDA and CODECA? Why now?

It is possible that the seven murders discussed here were conducted independently of one another, the result of a number of land conflicts and political disputes coming to violent ends. However, a fear has spread through grassroots organizations that the current wave of murders may have been coordinated, whether by people within or outside of the Guatemalan state. The strongest evidence supporting this fear is the fact that only two social movement organizations have been targeted. Why these two organizations, and why are the murders happening now?

The wartime roots of today’s violence play an important role. Present-day sicarios owe much to the death squads that operated during Guatemala’s internal armed conflict, both within the National Police and connected to private security in rural settings. Many Guatemalan state institutions were not reformed following the end of the war, allowing for organized criminal networks, largely based in the old military structure, to flourish. That same collection of military officials financed the campaign of current President Jimmy Morales, whose administration has in turn supported the armed forces and lambasted efforts against corruption and impunity by the International Commission Against Impunity in Guatemala (Comisión Internacional Contra la Impunidad en Guatemala, CICIG).

There has also been a steady drift towards the use of repressive violence to enforce extractive projects. When the Guatemalan government and the Guatemala National Revolutionary Unity guerrillas signed peace accords in 1996, its content leaned heavily towards an economic transition to neoliberalism through accord-based initiatives. These projects had perhaps their greatest impact in the countryside, where programs to settle agrarian conflicts and provide loans for communal land purchases were intended to pacify the campesino social movement and make room for extractive projects such as mines, hydroelectric dams, and agro-industrial mono-cropping.

The effects of extractive projects have been so overwhelmingly negative, however, that both established social movement organizations and unaligned communities have risen up with direct action and legal measures against them. In response to this opposition, private companies and the state have turned to violence. Key events have marked the onslaught of this repression: the first violent post-war land eviction in 2004; the first military shooting at a protest in 2005; the beginning of “states of siege” martial law declarations in 2010; the eviction of 12 communities in unison in 2011; a military massacre of protesters, 2012; the recent turn to murder by sicarios instead of state forces or private security.

The opposition to extractive projects and the neoliberal economic model has also generated a significant shift in grassroots organizing, with affected communities rather than formal social movement organizations taking the lead through the defense of territory. As a result, legal charges have been laid against nearly 1,000 community members and Indigenous ancestral authorities, dozens of rural communities have been violently evicted by state forces, and many community-based land and water defenders have been killed.

Within this scenario, the targets of this year’s violence, CCDA and CODECA, represent the two campesino-Indigenous organizations that have most actively supported community struggles and most consistently challenged successive governments. Both groups have worked tirelessly, especially during the administrations of former general Otto Pérez Molina (2012-2015) and Jimmy Morales (2016-present), presenting legal injunctions against extractive projects, organizing regular highway blockades, supporting land occupations, and demanding the resignation of presidents in the wake of corruption scandals—successfully, in Pérez Molina’s case.

Another factor singles out CCDA and CODECA today: both have chosen to challenge political power at the ballot box. The CCDA presented a number of its representatives as congressional candidates with the Convergencia party in 2015. The election to Congress that year of then-CCDA general coordinator Leocadio Juracán has presented an inconvenience to the Guatemalan establishment in the form of legal initiatives against extractive projects and in support of communities in resistance.

On May 9, the same day that the wave of killings began with an attack on national CODECA leader Luis Arturo Marroquín, CODECA presented a formal application to launch its own political party, the Movimento para la Liberación de los Pueblos (Movement for Peoples’ Freedom, MLP). Although few Guatemalan voters have supported progressive candidates since the democratic transition of 1986, the grassroots strength of CCDA and CODECA could present political challenges in some of the 2019 electoral races.

This political and economic context serves as the backdrop to the murder of CCDA and CODECA activists. An embattled President Morales, under constant fire from both protests and legal investigations, has lashed out publicly at CODECA—posturing which CODECA connects directly to the violence that followed. That group and the CCDA are both positioned to draw votes away from establishment parties in 2019. Recent investigations and court victories have challenged the impunity of the military and organized crime. Community movements defending territory from extractive projects are springing up across the country, and campesino organizations continue to rock the boat despite efforts to silence them.

In response, repressive violence is on the rise. Within that tide, something new has surfaced this year: the assassination of a large number of activists from the same two organizations. Whether or not the murders were coordinated, they point to an incredibly tense national struggle and a dire moment for the safety of all rights defenders.

*The analysis of murders for this article was conducted by the author after compiling sixteen years of UDEFEGUA-based data for a larger research project. The assistance of the Guatemala-based journalist Jeff Abbott was indispensable in creating the database.