From Germany to Ayotzinapa

German guns have been traced to the disappearance of the 43 Ayotzinapa students on September 26, 2014. Now the company that exported them may actually be held accountable. 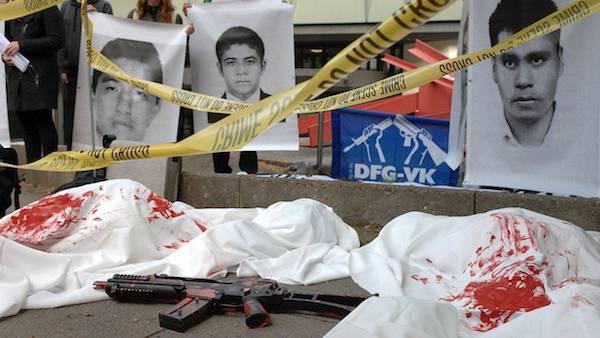 The district court in Stuttgart, Germany, is a modern and functional building. It looks like the ideal of what Germans would want in a justice system: an austere place, where disputes are resolved efficiently and calmly by the power of reason and law. This morning, however, the scene is different. Activists are holding up posters with the faces of the 43 Ayotzinapa students who were disappeared in Mexico on September 26, 2014 from Iguala, Guerrero, and three dozen journalists are present to cover the first day of an unusual trial.

Six ex-employees of Heckler & Koch, located in Oberndorf, Germany, are facing criminal charges for their role in allegedly illegal arms exports to Mexico. They stand accused of having sold almost 5,000 G-36 rifles to Mexico between 2006 and 2009, which ended up in the four states explicitly listed as “prohibited destinations” by the German government, which prohibits Guerrero, Chiapas, Jalisco, and Chihuahua—states with poor human rights records—from receiving arms.

According to German and European Union law, governments can control the delivery of arms into regions with records of human rights abuses via an “end-user-certificate.” This certificate requires that buyers of military products sign a document that clearly outlines the intended end-use of the respective goods—which may contain “prohibited” uses or destinations if an explicit use or reasoning is provided.

Yet research by the Human Rights Center Miguel Agustín Pro Juárez (Centro ProDh) has revealed that Iguala police had at least 59 G-36-rifles, and that at least seven weapons manufactured by Heckler & Koch were used on the night of the disappearances of 43 Ayotzinapa students and murder of six. To this day, the crime remains unsolved. While President Enrique Peña Nieto’s government has insisted on the so-called historic truth of the event, which places the blame exclusively on local police and organized crime, the families of the students, civil society, the United Nations, and an expert commission of the Inter-American Human Rights Commission have uncovered countless flaws, omissions and even human rights violations committed during the course of the official investigation.

The trial is taking place because of a criminal complaint submitted by Germany’s most prolific anti-weapons advocate, Jürgen Grässlin. Grässlin learned of Heckler & Koch’s dubious arms deals with Mexico after being contacted by a whistle-blower from Heckler & Koch, who claimed he’d been asked to train Mexican police forces on G-36 use in a “prohibited” state. In April 2010, Grässlin filed a complaint with the public prosecutor's office in Stuttgart. But it took more than eight years to bring the case before a judge.

Presiding Judge Frank Maurer claimed the delay was due to the district court’s case overload, not political reasons. But Grässlin holds a different view: “From the beginning, the prosecutors in Stuttgart gave little priority to the issue of illegal arms exports,” he says. “And instead of pursuing unlawful practices of Heckler & Koch, they even tried to prosecute me for publishing my research on the illegal Mexico deals in a book.”

When Grässlin’s lawyer pressed charges against the German authorities responsible for the export permit in 2012, the responsible state attorney only opened the case to close it right away, setting into effect a three-year statute of limitations without actually investigating the issue. Now, six years later, it is too late to prosecute any civil servants. “In that case, one public official shielded others from criminal charges,” suspects Grässlin.

Judge Maurer may have had another political reason to delay the trial as well, explains Jan van Aken, a former weapons inspector with the United Nations and former member of parliament for Germany’s Left Party, who is monitoring the trial for the Rosa Luxemburg Foundation: one of the defendants, Peter Beyerle, former executive director of Heckler & Koch, was a high-ranking judge in the region before he retired and joined the company’s board. Grässlin speculates that Beyerle may have enjoyed privileged treatment by his former peers.

The court has scheduled 25 hearings, which began May 15, before a verdict will be issued this fall. The defense strategy thus far has focused primarily on rejecting the idea that there ever was a list of “prohibited” states to begin with that would affect an export permit. The defendants’ lawyers argue that there while the government mentioned certain concerns for some Mexican regions, it never had a concrete list. Secondly, they claim that the existing end-user-certificates formed only part of the contracts between Heckler & Koch and the Mexican defense ministry, SEDENA, which is responsible for the import of all foreign guns. They argue that these certificates are separate from export permits, which in their view allow exports to Mexico in general.

The prosecution, on the other hand, sees the end-user-certificate signed by Mexican authorities as a crucial part of the export permit. Consequently, the prosecutors in Stuttgart argue that because the defendants were responsible actors in an export deal that exceeded the limits of the permit given by German authorities, they have violated the War Weapons Control Act and the Federal Act on Foreign Trade—an offense punishable with up to five years in prison.

However, the defendants and anti-gun activists seem to agree on one crucial point: that end-user-certificates are an extremely inadequate form of controlling the final destination of weapons. For example, Beyerle’s testimony explained how German authorities advised Heckler & Koch in detail on how to strategically present their request to ensure they would receive the export permit for Mexico. He slammed end-user-certificates as a totally useless instrument for arms control, since the German government has no way of checking whether the receiving state upholds the terms of the certificate.  In that regard, Beyerle said that considering the concerns the German government held about the human rights situation in Mexico, they should have issued a general refusal of any weapons exports to the country.

Charlotte Kehne, a member of the German anti-weapons NGO Live without Arms (Ohne Rüstung Leben) agrees: “Increasing violence, human rights violations, corruption and impunity should have been reasons not to sell any arms to Mexico,” she says. “The intent of the German government to limit the end-use to certain states within Mexico was doomed to fail from the beginning.”

The Arms Industry on the Defensive

Sofia de Robina, a lawyer with Centro ProDh, has tracked the G-36 rifles all the way from Oberndorf to Iguala. The organization is representing the families of the 43 disappeared students and had access to dossiers of the official investigation by Mexican authorities. The documents revealed alarming irregularities in the proceedings of purchasing arms, allowing them to retrace the journey of almost 2,000 G-36 rifles to Guerrero.

In that context, a former employee with Heckler & Koch, Markus-Joachim Bantle, who is serving as a witness for the prosecution in the Stuttgart trial, alleges that General Humberto Alfonso Guillermo Aguilar, head of weapons procurement with SEDENA, the Mexican defense ministry, accepted bribes from Heckler & Koch for weapons that would wind up in the hands of security forces in “prohibited states.”

Meanwhile, Heckler & Koch published a press release announcing “far-reaching changes in their compliance management systems” after an internal audit, whose results were handed over to the court in a 700-page document. The company declared that it is “aware of its social responsibility and that it will live up to it with great compromise and the required diligence.” Yet just a week later, investigations by public television’s investigative network Report Mainz and the daily newspaper TAZ broke the news that Heckler & Koch did not only bribe Aguilar, but also several German parliamentarians, to ensure the export requests to Mexico were approved. These investigations suggest that Heckler & Koch has pushed for donations to politicians, including sending 10,000 Euros to the office of the whip of Volker Kauder, Chancellor Angela Merkel’s governing party, to facilitate the authorization process.

These revelations come at a moment when the German arms industry is under attack for its gun exports to conflict regions around the world. While exports to Saudi Arabia have infuriated peace activists for years, the recent Turkish attack on the Kurdish city of Afrin involving German Leopard tanks have led to a surge in public attention the topic and increased activism from a broad spectrum of civil society. More recently, the murder of Brazilian left-wing politician and human rights activist Marielle Franco with a MP5 manufactured by Heckler & Koch in Rio de Janeiro has brought the dirty business of Germany’s weapon industry to the front pages.

According to Jan van Aken, such coverage could help hold the industry accountable. “For the past decades the [German] government almost indiscriminately endorsed any request for weapons exports.,” he says. “That hasn’t changed, but now they are under much bigger public pressure, so they might temporarily act with some restraint.”

Grässlin is hoping such pressure will lead to strict sentences for all of the defendants: “After a thorough reappraisal of these outrageous arms deals, we can only hope that justice will prevail,” he says. “This should be our signal from Germany to Ayotzinapa and all of Mexico.”

But whether the trial will end in convictions depends on the prosecution’s ability to prove the individual responsibility and intent of each of the defendants. For this, the court has to retrace exactly how the arms deals with Mexico between 2006 and 2009 were handled.  Considering the often informal processes of the weapons business, it’s a daunting task.

In Mexico City on May 26, 2018, 44 months after the tragic night of Iguala, the parents of the 43 disappeared students keep marching. They shout: “Alive they were taken, alive we want them back,” the battle cry of the broad movement in search of Mexico’s disappeared. According to the latest data, more than 37,400 people have gone missing in Mexico since the beginning of the War on Drugs in 2006.

On June 4, a landmark verdict in Mexico ordered the creation of an Investigatory Commission for Truth and Justice to reinvestigate the botched case in Ayotzinapa, which will be include victims’ representatives, the National Human Rights Commission, and the Federal Public Ministry, supported by international experts from the United Nations and the Inter-American Human Rights Commission. Whether the government will comply may depend on the outcome of the upcoming presidential elections on July 1. Left-wing candidate Andrés Manuel López Obrador, who has a two-digit lead in the polls, has vowed to create such a commission and to leave the case open until properly solved.

“For the parents of the 43 students, the trial in Germany is very important,” says Vidulfo Rosales, the lawyer representing the families of the students, in Mexico City a few weeks later. “The export of weapons should be strictly controlled. If it’s not, it leads to the death of human rights defenders, social activists and other innocent people, as we have seen in Iguala.”

To date, despite the insistence of Centro ProDh, Mexican authorities have not yet started an investigation into the issue. “At least there is a legal proceeding dealing with the case [in Germany],” Robina says. “Here in Mexico the government has done everything it could to leave us with its shameful ‘historic truth’ and nothing to resolve the crime and the corruption related to it.”

Alexander Gorski is a human rights law student and freelance journalist from Germany. He is currently based in Mexico City.