After the elections in Venezuela, what are the next steps for the government and its internal opponents? 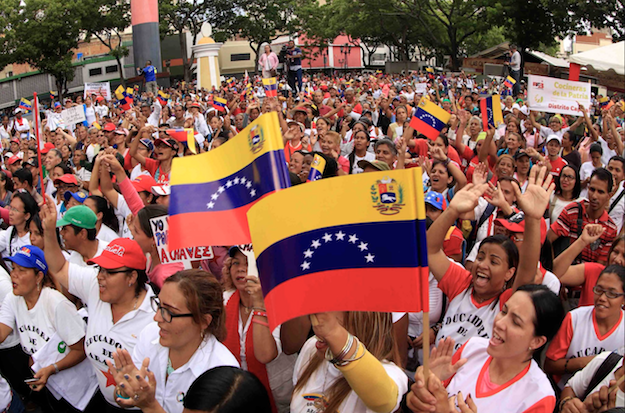 Read a Spanish version of this article here.

Maduro’s triumph in the recent elections has sparked an internal debate within Chavismo that could either strengthen the movement or lead to its definitive disintegration.

In some ways, the results of the May 20 elections strengthened the PSUV from several perspectives. Not only because it resulted in triumph over the opposition, but also because it proved to be the only party of weight amongst Chavista allies, responsible for 5,267,109 votes, or 85% of Maduro’s votes. Today the PSUV holds 18 of the 23 states, 306 of the 335 municipalities and all of the seats of the National Constituent Assembly. The Assembly must draft a new constitution, most likely this year.

However, these elections also marked the first time that the PSUV has faced competition from within Chavismo itself, via the Somos Venezuela movement, which emerged with enormous advertising resources and was explicitly linked to the promise of a direct bonus to thousands of people, disseminated by the government during the pre-campaign and the actual campaign. This movement—led by the current president of the National Constituent Assembly, Delsy Rodriguez—obtained 6% of votes from Maduro, while none of the other parties allied with Chavismo reached 2%.

Even so, various perspectives have come out since the elections from diverse voices within Chavismo related to the most important issues facing Venezuela today—from economic policy to the management of the oil industry. Within these ideas, are there solutions, or will they simply create a path towards more chaos?

The talks that took place a few days after the elections between the government and certain opposition sectors resulted in the release of dozens of prisoners incarcerated for street violence (guarimbas) in 2014 and 2017. After this, Maripili Hernández, a Chávez ex-minister, recommended the debate continue within discontented sectors of Chavismo as well: “I ask myself: when will Maduro engage revolutionaries in debate? It seems like he could speak to anyone in the world,” she said. “Even with those guarimberos of the opposition, but he isn’t speaking with the revolutionaries, he isn’t speaking with Polo Patriótico [a sector of Chavismo], he isn’t speaking with the two and a half million people who voted for Chávez and now people aren’t voting for him… When will he listen to the revolutionary sectors?”

The internal debate within Chavismo began only a day after the elections, when recognized intellectual Nestor Francia called Maduro’s victory “pyrrhic,” sounding the alarm bell on the decline in Chavista votes. This warning shed light on the fact that there are multiple ways to read the electoral outcome.

Another intellectual, perhaps of highest prestige within the Venezuelan Left, Luis Britto García, has written a surprising piece, “Congratulations, again,” a comparison between Maduro’s current economic discourse and that of ex-President Carlos Andrés Pérez, the main enemy of Chavismo, who in 1989 established economic adjustments with the International Monetary Fund, economic adjustments that plunged the country into a deep crisis, which reached its highest level with the social explosion known as the Caracazo.

Beyond such comparisons, one of the most radical criticisms has been raised by the advisor of the Central Bank of Venezuela and academic authority on petroleum, Carlos Mendoza Potellá, who suggested a radical change in crude oil extraction. His analysis questions Chávez’ perspective on petroleum, in which the Orinoco Belt plays a central role. But Potellá sees the oil zone as a mere “illusion” because it is so expensive.

Finally, Elías Jaua, Chávez’s ex-vice president and current Minister of Education, has made some radical statements about the governing party and the PSUV. First he called for internal PSUV elections and then demanded the entire cabinet resign.

To tackle these criticisms, President Maduro scheduled a conference within the United Socialist Party of Venezuela (PSUV), which will conclude on July 24th. He has emphasized opening a process of “criticism and self-criticism,” proposing a “renewal” and “new beginning.” In an effusive speech before the Constituent National Assembly, he pointed out: “we are not doing enough nor are we doing it well, we are in need of a deep rectification, we need to do things again.” Days later he called for a “total reorganization” of the PSUV. However, he has not yet responded to the demands of his fellow party-members, such as the call for internal elections and for his resignation.

However, those who win a forfeited game are still winners, and there is no domestic law or rule that calls for the results to be suspended. So the opposition must wait until 2024 to again try to take power by means of election unless something unexpected occurs. This situation sparks many questions over the effectiveness of the opposition's strategies, including boycott and abstention, as well as the idea of an “international exit.” None of these strategies seem to be producing results.

While the United States announced sanctions that prevent Venezuela from selling assets in its territory, this kind of measure might solidify the Venezuelan government’s power, which needs a powerful enemy to substitute the internal opposition, who are defeated and without political power to reanimate it. Chavismo becomes unified when confronted by its historical adversary, so the absence of this adversary could cause it to lose its compass and spark internal friction.

In this manner, the North American sanctions and the constant denunciations by other presidents against Maduro—such as those by Colombian president Juan Manuel Santos and his successor, right-wing Iván Duque—fill the emptiness left behind by the mostly upper-class led opposition, many of whom live abroad, and allow Chavismo to remain active in the fight against a higher-ranking enemy. Meanwhile the radical actions that the opposition expects from the United States on Venezuela have not occurred as quickly as they’ve hoped.

The Power of the PSUV

Given this political landscape, it makes sense that the most impoverished sectors would fear how the opposition would act in office and prevent it from reaching power. Even though the election boycott was perhaps more decisive in determining the results of the elections, as it led to low voter turnout, this is the sector that showed up at the polls to vote in Maduro.

Surely the high abstention and the loss of votes for Chavismo have pushed Maduro to suggest a “renewal” within Chavismo. It is not the first time this has happened. In 2007 and 2010, following a constitutional reform and other legislation, Chávez called for an internal rectification, something Maduro has reclaimed in 2018. In 2010, Chávez called for the transformation of the PSUV from a party/machine (both pragmatically and electorally) into a party/movement, based on the direct relationship with the needs of the people, which seeks to empower the subaltern sectors and combat bureaucratization.

These changes took time to arrive and Nicolás Maduro, following the death of Hugo Chávez, who returned to the fight against inefficiency and bureaucracy in his last addresses, inherited the debt of deepening this logic. My 2015 book, Dale más gasolina: chavismo, sifrinismo, and bureaucracy, describes a crossroads moment for Chavismo. After emerging as a “savage” movement and protest against corrupt and exclusionary partisan logic, Chavismo began to suffer its own bureaucratization, not unlike other revolutionary processes, that has reduced the electoral spectrum, and maintain its institutionalism through an iron fist—but above all because of the inconsistencies of the opposition.

If this trend continues, the PSUV could impose itself indefinitely, as in Mexico’s Partido Revolucionario Institucional (PRI), which has been in power since 1929 (save between 2000 and 2012). This still does not negate the struggle between its internal currents and whether the opposition and the United States continue to establish strategies that could topple the institutional structures that allow Chavismo to maintain its power.

Ociel Alí López is a sociologist, political analyst, and professor at the Universidad Central de Venezuela. He has won prizes for his book, Dale más gasolina: chavismo, sinfrinismo y burocracia (2015), as well as the International CLACSO/Asdi Award for Young Researchers in 2004.