Across the region, Latin America’s militaries are regaining power through the court system 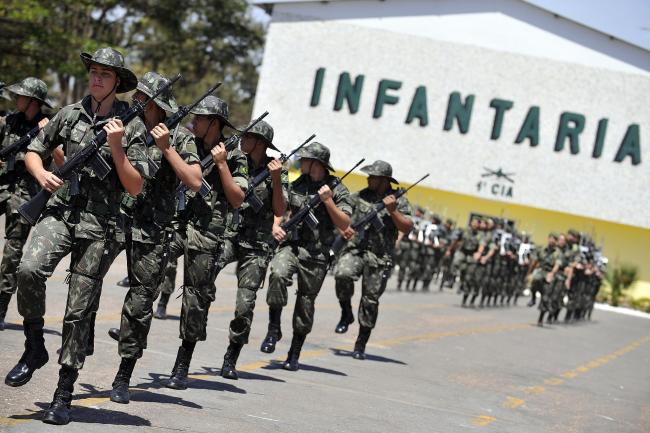 On November 11, 2017, eight civilians were killed in a joint police and army security operation carried out in São Gonçalo, Brazil. Survivors and witnesses reported seeing special forces, dressed in black with laser-scoped rifles, being deployed by helicopter and shooting from a wooded area. The military, however, has refused to investigate the case or cooperate with civilian authorities. Thanks to a new law passed the previous month, it has the legal right to do so.

Law No. 13.491, passed by the Brazilian Congress in October, gives military courts jurisdiction over their personnel accused of human rights violations. Prior to the law’s approval, the Ministry of Defense publicly made the case that allowing civilian courts to handle such cases would hinder policing operations. Michel Temer’s administration is increasingly using the armed forces for domestic policing duties, whether in rural areas against land rights activists or in the favelas and peripheries of major cities.

Brazil’s 2008 “pacification” policy led to the deployment of military personnel to the favelas of Rio de Janeiro, and the militarization of policing intensified in the run-up to the 2014 World Cup and 2016 Olympic games. According to Human Rights Watch, thousands of civilians are killed by the military and police each year. The new Ministry for Public Security, created in February, is led by an army general, and in May the Brazilian military was deployed in response to the nationwide truckers’ strike that blockaded highways. This was the first time the military had been used in this way since the end of the military dictatorship in 1985.

Brazil is not alone in militarizing its justice system. Military courts are increasingly asserting jurisdiction throughout Latin America. In June 2015, Colombia passed a bill similar to the one adopted in Brazil, shifting jurisdiction for most crimes committed by members of the military to the military courts. The Constitutional Court struck down the first two iterations of the bill, but the government was determined to make the change and crafted a slightly narrower law that has since taken effect. Since 2005, Venezuela has been using military courts extensively to prosecute civilians involved in protests against the government. In Chile, cases of human rights violations committed by the military are still tried in military courts.

Similar laws may soon be passed in Central America, where states are increasingly deploying the military on the pretext of combating crime, drug trafficking, and gang violence. Mexico removed cases involving human rights violations by soldiers from military to civilian courts in 2014, but the Internal Security Law of December 2017 grants the army substantial powers in domestic policing could lead to a backslide towards the use of military courts.

The Abuse of Military Courts in Latin America

Military justice systems are not inherently problematic. Military personnel are subject to codes of justice for crimes like insubordination, which have no equivalent in the civilian world. But when military courts extend their jurisdiction over their personnel for crimes such as human rights abuses—and in some instances even put civilians on trial—this parallel legal system undermines the rule of law. When military courts are able to sit in judgment of the military’s own actions, they can provide special treatment to their personnel and shield them from accountability.

There is a long history of military courts abusing their power in Latin America. Military courts were a tool of repression for most of the authoritarian regimes that ruled the region in the 1970s and 1980s. In Uruguay, civilians charged with crimes against national security were tried in military courts, and one in 50 Uruguayans was jailed at some point during the military’s rule. In Chile, under the dictatorship of General Augusto Pinochet, military courts were used extensively against civilians, especially in the first five years of the dictatorship via the use of wartime tribunals under the 1973 “state of siege.”

In addition, regimes fighting insurgencies granted their militaries expansive judicial power. Up until the mid-1980s, Colombia’s military could try civilians for an array of crimes in any region when a state of siege was in place, which could be initiated by decree when the president determined the public order had been disturbed. Any homicide committed by the armed forces in these regions was legally justified as long as it took place during a planned operation.

During Guatemala’s civil war, the military created secret tribunals—termed Courts of Special Jurisdiction—to put civilians on trial, and routinely sentenced them to death by execution. In Peru, President Alberto Fujimori revived military courts as he escalated the war against the Shining Path in the 1990s. He ruled that the military had jurisdiction over any crimes vaguely defined as terrorism, and military courts regularly prosecuted civilians.

The Struggle for Reform

The struggle to reform military courts perpetuated long after the transitions to democracy across Latin America. Indeed, legal power was one of the last vestiges of authoritarian rule in many countries, with militaries staunchly resisting attempts to bring them under civilian jurisdiction. In fact, Guatemala operated under an 1878 military code of justice, which gave it sweeping judicial powers, until Congress finally reformed the code in the 1990s. Human rights violations committed by the military were not shifted to civilian courts in the Dominican Republic until 2002. It took a Constitutional Court ruling in 2004 to effect such a change in Bolivia. Ecuador and Argentina did not move non-military crimes committed by military personnel to civilian courts until 2008.

Despite changes to the laws on the books, in many countries the military has continued to obstruct civilian investigations by tampering with evidence and intimidating witnesses. In extreme cases, members of the military have made death threats against civilian investigators, as occurred in Honduras after the 2009 coup d’état. In Guatemala, defense lawyers use a variety of delaying tactics to stall cases, such as filing numerous petitions to have a judge removed from a case or requesting their recusal. In 1999, soldiers were arrested for their involvement in the 1982 Dos Erres massacre in which over 200 people were killed. The first convictions in the case did not occur until 2011, a full 12 years after the initial arrests.

The ability to achieve any reform in these countries was a result of the sustained action of human rights activists and crucial court rulings. Domestic lawyers and judges were able to point to the landmark 1999 Inter-American Court of Human Rights case that rejected the use of military courts for the prosecution of human rights violations, citing Article 7 of the American Convention. This article requires that “anyone who is deprived of his liberty shall be entitled to recourse to a competent court” and that “this remedy may not be restricted or abolished.”

In many cases, however, reform only succeeded through direct bargaining with the military, with governments granting concessions in other areas in exchange for judicial reform. In Argentina, for example, reform only occurred when President Néstor Kirchner significantly expanded the military’s budget for the procurement and manufacturing of new equipment.

It is perhaps unsurprising that militaries across the region were reluctant to give up their legal powers. Hundreds of military members across the region have been tried for human rights violations, from low-level soldiers to former heads of state, including the now-deceased Generals Augusto Pinochet in Chile and Efraín Ríos Montt in Guatemala. Amnesty laws, negotiated as part of peace agreements or passed as prerequisites for leaving power, were meant to protect militaries, but have been systematically dismantled—circumvented by creative judges (Argentina), struck down by the Inter-American and constitutional courts (Peru), and revoked by politicians under pressure from human rights organizations (Uruguay).

The Re-empowerment of the Armed Forces

Given how repressive military courts were and how long and difficult it was for civilian reformers to finally rein them in, the re-empowerment of these courts is a frightening development. It has the potential to roll back decades of human rights law and judicial reform.

Many politicians have run on platforms promising to be “tough on crime” and have deployed the military to conduct domestic policing operations, as in Brazil, Ecuador, Mexico, Guatemala, El Salvador, and Honduras. Elected leaders, seeking to deliver results for their voters in fighting drug trafficking and gang violence, are turning to their militaries and equipping them with increased legal powers. Under these circumstances, democracy and the defense of human rights seem to be at odds with each other. Politicians are responding to public pressure, and in doing so are pursuing policies that contradict past progress in curtailing military power. The 2015 bill in Colombia to shift jurisdiction for most crimes committed by members of the military back to military courts passed with overwhelming support; only a minority of leftist politicians voted against it. The 2017 measure in Brazil similarly was approved in the Senate by a large margin.

To stem the tide of legal empowerment of the military and reverse these recent setbacks, human rights activists will need to be increasingly vigilant and work to supplant the security narrative that has dominated recent elections in countries such as Guatemala and Honduras, and led to the rise of populist leaders on the right. A wave of leftist politicians rose to power in the past by promising redistribution of wealth and anti-poverty plans—the policies necessary to address the underlying causes of the recent rise in crime. The recent election of Andrés Manuel López Obrador in Mexico, who ran on an “Abrazos, no balazos” (hugs, not gunfire) platform perhaps is a welcome sign.

Most importantly, this will be a major test for the civilian judiciary in the region. Judicial reform has been at the forefront of domestic NGO work and international donors over the past three decades. It will largely be for naught if civilian courts cannot retain jurisdiction over the worst human rights abuses committed by the armed forces. Constitutional and Supreme Courts will have to rule on these laws, possibly being put in the position of having to make judgments that go against the wishes of politicians, the military, and even popular opinion. Success will also depend on the Inter-American Court continuing to be the last safeguard for democracy in the region, providing domestic courts with legal rulings to reinforce their positions.

Brett J. Kyle is Assistant Professor of Political Science at the University of Nebraska-Omaha where is a member of the Office of Latino/Latin American Studies (OLLAS) and the Goldstein Center for Human Rights. He is the author of Recycling Dictators in Latin America: Legacies of Military Rule (Lynne Rienner Books, 2016).

Andrew G. Reiter is Associate Professor of Politics and International Relations at Mount Holyoke College. He has published widely on issues related to transitional justice, political violence, and military politics.