Rural communities in Guatemala are rising up against unmanageable energy bills, more than two decades after the Central American country privatized its power grid. 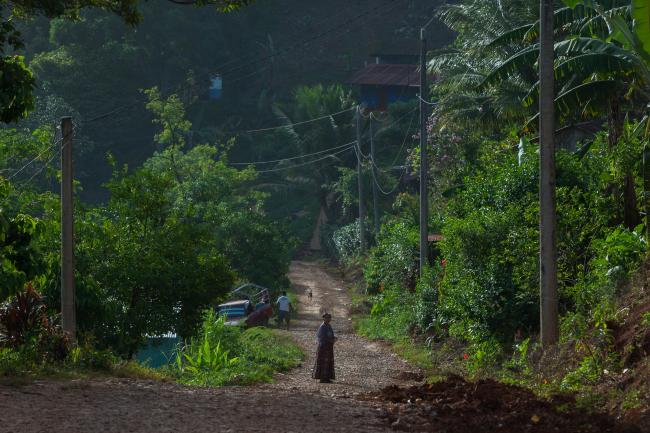 Hundreds of Q’eqchi’ Maya residents of the north central Guatemalan municipality of Chisec took to the streets in protest after Energuate, owned by Israeli-owned energy company IC Power, suspended energy services in town. Residents established peaceful roadblocks on June 14 to stop vehicles entering and circulating through the Chisec.

The company justified the suspension of service to 38 communities in the municipality, located in the department of Alta Verapaz, citing the fact that residents in 13 communities refused to pay their bills.

Energy services remain poor across the country, with service regularly cutting out, especially in rural areas like Chisec. “When the power goes out it affects us,” said Rita Coc, a resident of Sepoc, a small village of nearly 100 families an hour drive down dirt roads from Chisec. “The candles we use do not illuminate the house like we need when we are taking care of our sick family members. We have grown accustomed to having lighting in our houses, and this why we need to find a means to lower the cost of energy.”

Manuel, a resident of Sepoc, explained that many people in town decided to stop paying their lighting bills due to prohibitive costs. He described the costs as a “robbery,” due to the fact that in many cases, they are paying for a service they do not receive. “We paid the bills for a time, but we could not continue to pay for this robbery when we depend on the small earnings from our crops,” he said.

Activists and residents estimate that the majority of communities in Chisec do not receive public lighting. “We pay high costs because of public lights,” said Rita Coc, a resident of Sepoc. “But I have never seen a single light in the streets.”

Activists in Chisec supporting the communities in their protest estimate that costs for lighting in public areas—which in most cases would be covered through municipal budgets, not individual—make up as much as 60 percent of monthly energy costs, even when service is sporadic or nonexistent.

Sepoc first connected to the national energy grid in 2014. Upon receiving the first bills, the campesino community was surprised to see high monthly charges, exceeding 200 to 400 Guatemalan quetzales ($25 to $50), well outside their earnings each month. Though the official minimum wage in Guatemala for agricultural workers is 2,644 quetzales per month ($343 USD), but the majority of small campesinos do not earn a steady income, averaging around 800 Quetzales ($100 USD) per month in villages around Chisec, according to residents of the municipality.

Many communities play an important part in getting their towns on the power grid in the first place, including in some cases even erecting the very poles for power lines in their communities. Once electrified, individual monthly bills include charges for household consumption and for public lighting supplied by the company and administered by the municipality.

In Sepoc, residents have refused to pay their bills for nearly four years in protest of the lack of public lighting and the high costs.

As communities protested in June, Jordán Rodas, the Guatemalan Human Rights Ombudsman (PDH), filed a lawsuit against Energuate for cutting services. The company began to restore suspended energy services in early July after reaching an agreement with the affected communities. Energuate agreed to lower costs by 40 percent to the communities of Chitocán II, Babatzul, Cubilgüitz, Semanzana, Tonzul Uculá, Secocpur, and Sequixquib, and to also reduce these communities’ debts for the time that the communities had not paid for electricity, according to a company press release provided to the author via whatsapp.

Other communities like Sepoc continue to face unpaid debts for the years they did not pay for the service. But residents hope to negotiate with Energuate to find a means of lowering the debt, resolving the high costs, as well as eliminating the phantom charges for services they have never received.

Days after the roadblocks in Chisec, the protests against the energy company spread across the country on the southern coast. Local residents blocked traffic on June 28 on the highway through Coatepeque, Quetzaltenango to protest the suspension of energy to seven communities within the municipality. The roadblock lasted two days, stopping shipping along one of Guatemala’s major highways. On June 29, the Guatemalan National Police were deployed to clear the highway, launching tear gas to disperse the protesters.

Energuate claims that communities of Coatepeque had refused to pay for nearly eight years. The companies reported that the communities who hadn’t paid have a collective outstanding debt of over 21 million Quetzales ($2.8 million USD.)

A month later, on August 3, angry residents from the village of San Agustín Pacayá reportedly detained the municipal mayor, Alfonso García Junco, as he visited the village to begin a dialogue to end the conflict over energy costs. The Guatemalan daily newspaper Prensa Libre reported that San Agustín Pacayá was one of three communities, including El Troje and San Rafael Pacayá 1 that were rejecting the dialogue to end the conflict.

Yet the mayor issued a statement to the PDH on August 3 where he contradicted news reports and denied he had been detained. He claimed nothing had happened and called on the media to restrain itself from reporting exaggerated reports, calling for calm.

In spite of the mayor’s claims, police were deployed to the community to free the mayor from his alleged captors where angry residents confronted them as they arrived. Upon his release late August 3, Mayor García Junco continued to claim that he had chosen to stay in the community on his own regard to find a means of resolving the conflict over energy.

Yet right-wing politicians, such as Alvaro Arzú Escobar, the current President of Congress and son of the late former mayor of Guatemala City, took to twitter to accuse the organization Campesino Development Committee (CODECA), which has been active in the struggle for the nationalization of energy for over a decade, for the what the national media declared an abduction. Other politicians also blamed the Committee for Campesino Unity (CUC).

Representatives from CODECA and CUC flatly denied any part in the alleged abduction of the mayor. Both organizations connect the conflicts over the high cost of energy to the privatization of energy. The mayor also continually denied that he was abducted.

Energy in Guatemala has been under private administration since 1997, when energy services were privatized following the end of the country’s 36-year internal armed conflict. The price of energy quickly increased nearly 212 percent, according to a study by CODECA in 2014, and has continued to increase in the two decades since Energuate switched to private hands.

The Spanish firm Unión Fenosa originally purchased Energuate in 1997, and managed the company until 2011 when Unión Fenosa sold its share in the company upon its closure. The British private equity firm Actis then acquired Energuate. In 2015, the Israeli firm IC Power, a subsidiary of Kenon Holdings, bought the company. According to Energuate, the company provides energy to 1.7 million consumers in 20 of Guatemala’s 22 departments, though the map on the company’s website only displays 19 departments.

In the two decades since the end of the civil war, Guatemala secured a spot as one of the primary exporters of energy to the rest of Central America as part of the regional common market economic agreement. According to data from the Guatemalan Ministry of Energy and Mining, in 2015, Guatemala produced 3,139 megawatts of energy, of which the country consumed around 1,700. The remainder was exported to the surrounding region, including Mexico.

Meanwhile, the United States continues to promote the expansion of energy generation across Guatemala and Central America as a means to lower the costs. Most recently, these efforts are being promoted as part of the Alliance for Prosperity, the plan launched in 2015 by the Obama administration to ostensibly to stem migration from Guatemala, El Salvador, and Honduras. Construction of new hydroelectric projects across the country has fueled the majority of new energy generation.

U.S. officials promoting the expansion maintain that increasing energy production in the region won't only bring down costs, but also "stabilize" the grid. Officials argue that this will mean improved services and provide the means to economic development of the region.

“Energy policy in Central America is focused on delivering accessible, reliable and affordable energy to the populations,” said Brian Nichols, the former U.S. ambassador to Peru and temporary chargé d’affaires at the U.S. Embassy in Tegucigalpa, Honduras. “Integration of energy throughout the hemisphere will mean that there will be more access to more reliable energy, particularly at a time when climates and weather are becoming a lot less predictable. Interconnection offers the opportunity to stabilize power.”

Yet increased production has not brought down costs and has generated new social conflicts and displacement across Guatemala. Droughts have also impacted energy costs in the region, with energy costs rising in 2016 due to lower production levels from the Chixoy dam in Baja Verapaz, which is one of the country’s largest producers.

Privatization of the electric grid had a similar effect in neighboring Honduras in 2016 and in El Salvador in 1998. U.S. officials argue that the rise in costs is a result of prices equalizing to market values.

Yet as is the case with Sepoc, the energy privatization has hit rural communities suffering from extreme levels of poverty hard.

Jeff Abbott is an independent journalist currently based out of Guatemala. His work has appeared at The Progressive, In These Times, and Truthout. Follow him on Twitter @palabrasdeabajo.