A Government for Impunity in Guatemala 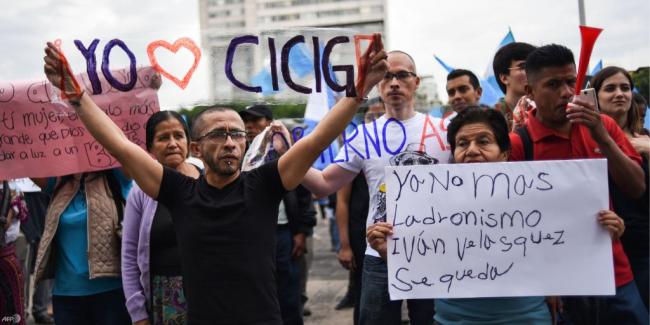 The imagery borrowed overtly, and self-consciously, from the military coups of the 1980s: as armored jeeps rolled through the streets of Guatemala City and marimba music chimed ominously over the radio, Guatemalan president Jimmy Morales, framed against a backdrop of uniformed soldiers, made a dramatic statement. He announced the overthrow not of a head of state— though Guatemala is no stranger to the autogolpe, or self-coup—but rather of the only body capable of holding his government accountable for its corruption. The UN-backed Commission Against Impunity in Guatemala (CICIG), Morales proclaimed, will be expelled from the country in 2019.

Since its establishment in 2007, CICIG, mandated to provide international support for local judicial processes, has been an uncommonly effective tool for tackling Guatemala’s “parallel state”—the shady networks of illegal clandestine groups which have, since the country’s long civil war (1960-1996), thoroughly captured state institutions. CICIG’s work strengthening Guatemala’s judicial capacity, cracking open formerly untouchable criminal cartels, and assisting the prosecutions of corrupt officials at the top echelons of local power structures earned it global plaudits. Accordingly, CICIG quickly found itself in the crosshairs of powerful military and business sectors involved in customs fraud, narcotrafficking, and money laundering. For years now, the Right has been trying to get rid of it.

CICIG’s survival until this point, in the face of such implacable opposition, can be partly credited to the backing it received from the United States. Even if the U.S.’ motives were the usual ones—to secure a safe investment climate for foreign capital, one unsullied by gross acts of criminality on the part of Guatemalan partners—the investigative work facilitated by that support was transformative. Morales’ predecessor as president, army general Otto Pérez Molina, now sits in prison largely because of CICIG, and the commission has repeatedly signalled that Morales and several of his family members, accused of fraud and illegal campaign financing, could be next on the chopping block.

But the Trump administration seems disinclined to continue its past level of support for CICIG. Morales has made a concerted play for U.S. favor, not only endorsing its deeply unpopular decision to move the U.S. embassy to Jerusalem but moving Guatemala’s own embassy to Jerusalem as an act of solidarity. Key players within the U.S. government, such as Republican senator Marco Rubio, have spuriously alleged that CICIG is in league with the Kremlin. And other reliable U.S. allies in the region, including Colombian president Álvaro Úribe Vélez—himself the subject of numerous corruption investigations—have denounced the commission and its lead prosecutor, the Colombian jurist Iván Velázquez. In response to Morales’ announcing the termination of CICIG’s mandate, the U.S. Embassy in Guatemala issued a conspicuously milquetoast statement which neither condemned the decision nor threatened any consequences.

Correctly gauging that the hemispheric political winds had shifted, the powers behind Morales decided to make their move, sending tanks to surround CICIG’s headquarters. CACIF, the powerful association of agro-industrial and commercial interests, quickly endorsed the government’s decision, and while human rights organizations issued vehement denunciations, whether they have the clout to reverse it depends on the degree of popular mobilization and international assistance they are able to muster. As the editorialists at the independent news outlet Plaza Pública put it, “It is not the moment to lose hope, but rather to stand tall and take to the streets, to defend the struggle for justice.”

Kirsten Weld is the John L. Loeb Associate Professor of the Social Sciences in the Department of History at Harvard University; she is also a member of NACLA’s Editorial Committee.