A Student Movement 50 Years and Counting

On the eve of the 50th anniversary of the 1968 Tlatelolco student massacre, another student uprising at the National Autonomous University of Mexico (UNAM) takes shape. 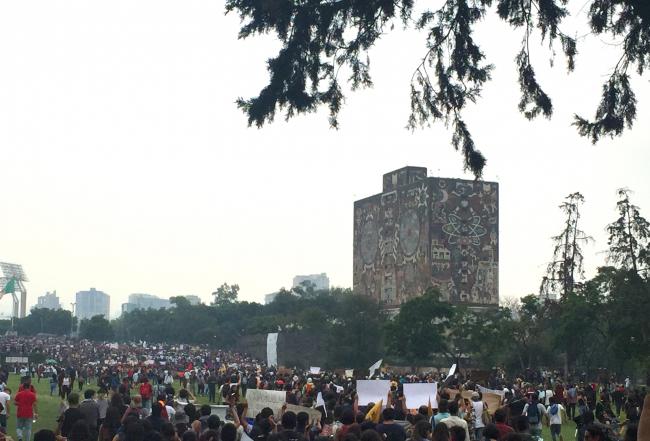 As the 50th anniversary of the October 2, 1968 Tlatelolco student massacre looms on the horizon, students at the National Autonomous University of Mexico (UNAM) in Mexico City find themselves engaged in another fierce struggle against campus, state, and gender-based violence—which extends well beyond the gates of the university.

On Monday, September 3, students from an UNAM-affiliated high school in the Azcapotzalco municipality of the capital were attacked as they rallied outside the Dean’s headquarters in the heart of the vast UNAM campus. Young men clad in UNAM football jerseys wielding stones, clubs, knives, and Molotov cocktails descended on the crowd, sparking panic and chaos and leaving several students injured, two with severe stab wounds, as campus security stood by. Gruesome images quickly circulated on social media of a portion of a student’s ear found on the blood-stained street.

The groups who launched the assault last week, known as porros, have been operating in and around the UNAM for decades, and they are deeply invested in the corrupt, repressive structures of power that have historically governed Mexico. The September attack was the worst of its kind in ten years.

Porros, officially student groups organized around university sports, are a peculiar blend of soccer hooligans, criminal gangs, and paramilitaries. Porrismo in Mexico can be traced to the 1930s. The organizations operate under the patronage of political interests who mobilize them against dissident student organizing. The porros became a notorious extra-official counterinsurgency arm of the Partido Revolucionario Institucional (PRI), whose corporatist and authoritarian rule dominated the country for over 70 years. Their activities range from infiltration and provocation to violent aggression and common crime. Sometimes backed by political actors within university power structures, and sometimes by external parties, porros have historically acted against student radicals with impunity.

In 1968, resistance to violence between rival porro groups helped spark the mass student movement for democratization and equality in the face of escalating state repression from the PRI regime. That repression culminated in the military occupation of the UNAM and the October 2 massacre that saw hundreds gunned down and thousands arrested, just days before the inauguration of the Olympic Games in Mexico City.

Following the September 3 attack, UNAM student organizations immediately denounced complacency of the university authorities who watched the incident unfold within feet of their offices, as well as the evident collusion between campus security and the assailants. Dean Enrique Graue soon issued a statement condemning the violence and moved to expel 18 alleged assailants from the university, and the coordinator of UNAM security was suspended.

But the administration’s gestures did not placate the university community, which recognized the incident as indicative of deep, structural problems both within the UNAM and the nation at large. Students from the Philosophy and Literature Department quickly voted for a 48-hour work stoppage (paro), occupying their department and suspending classes and administrative activities. Dozens of UNAM departments and institutions soon joined the paro, which they extended to 72 hours.

On Wednesday, September 5, a colossal sea of students paralyzed the enormous UNAM campus. Tens of thousands of student protesters, organized in tight blocks by academic institution, called for the Dean’s resignation and the expulsion of all porros from the UNAM. But the demands went much further: They identified the latest assault in the context of a tide of violence against students, from the infamous disappearance of 43 students from the Ayotzinapa Rural Teacher’s College on September 26, 2014, to a series of recent femicides, including the kidnapping and murder of 18-year old Miranda Mendoza Flores, a high school student of the UNAM’s Colegio de Ciencias y Humanidades, whose body was found on Sunday, September 2. Chants of, “Why do they kill us, if we are the future of Latin America?,” “Not one more, not one more, not one more murdered woman!,” and “No more [sexual] harassment in the UNAM!” rang out across the campus. 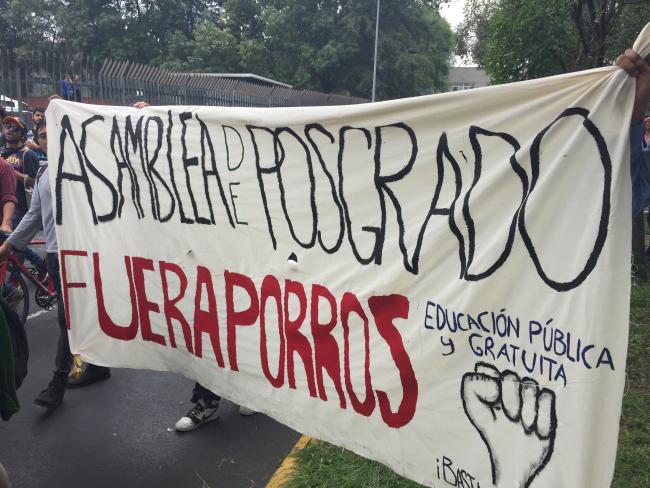 On Friday, September 7, representatives from over 30 UNAM departments and allied public higher education centers convened in an Inter-University Assembly. Social movement leaders from the 1968 student movement and 1999 university-wide strike, along with representatives from current struggles against water privatization and a proposed new airport in Mexico City.

After a full 17 hours of presentations and debate, the assembly agreed to a series of preliminary demands centered around seven principal issues: Investigation into and redress for the events of September 3, as well as the fulfillment of the demands of the Azcapotzalco student protesters; democratization of public universities; quality of campus life and respect for student rights and liberties; an end to gender violence and violence against women; guaranteeing student security on campus; ensuring free public education; and implementing transparency in university structures.

The official statement released the following day read, in part: “The violence that the neoliberal administrations have unleashed has overwhelmed the youth with murders, forced disappearances, rapes, femicides and narcotrafficking. […] The government and its institutions of control have made people believe that this condition is normal, that we should learn to live with it. We say NO. The organized students of this inter-university assembly speak out against the state of extermination to which we have been submitted, demanding optimal conditions for the full development of youth, as well as the guarantee of a high-level academic education and a dignified future.”

The student uprising and the attack that precipitated it occur at a moment of major political change in Mexico, with progressive populist Andrés Manuel López Obrador or “AMLO” set to take office in December. The country’s traditional elites are jockeying to maintain their powers and privileges under the new, unknown order. Those struggles are palpable within the UNAM, where the PRI has historically wielded enormous influence in university power structures.

At the same time, neoliberal education reforms imposed under the outgoing Peña Nieto administration continue to weaken teachers’ unions and advance private corporate interests across the country. In August, the right-wing Coparmex business association put forward a proposal to begin charging tuition at the UNAM, a longstanding goal of conservative forces in Mexico that has historically met militant resistance in the defense of the UNAM’s commitment to free public education. The famous 1999 uprising was over just such a proposal: Following the UNAM administration’s approval of a plan to charge obligatory tuition and fees, students launched a strike that lasted from April 1999 to February 2000, effectively shutting down the university for months. Although federal police ultimately broke the strike, the measure was defeated.

In a statement issued September 6, the General Assembly of UNAM graduate students warned: “We are witnessing the end of the truce that the organized students achieved in 1999 by reversing the effort to charge tuition fees in the UNAM. War has been declared, and we must respond. […] We will not permit the privatization of education and the precarization of teaching and research.”

AMLO, for his part, has denounced the violence and expressed solidarity with the student mobilizations, declaring: “The [incoming] administration will not encourage these kinds of attitudes. Political spying will end. We don’t want porros in the universities. […] I support the young people who are demonstrating against these illegal, reprehensible actions.”

Most classes resumed across the UNAM on Monday, September 10. But undergraduate students from several departments, including Philosophy and Literature, Political Science, Social Work, Economics, and Psychology, voted to extend their strikes and retained control of their buildings at the time of writing.

In the meantime, the organized student community is preparing to take its struggle off campus as part of the upcoming nationwide actions to mark the anniversaries of the 1968 Tlatelolco massacre and 2014 Ayotzinapa disappearances—which commemorates its fourth anniversary on September 26. The Inter-University Assembly convened a march for September 13 from the National Museum of Anthropology to the Zócalo plaza in the heart of Mexico City, following the route of the September 13, 1968 “Silent March” in which student protesters covered their mouths with handkerchiefs.

Fifty years later, the inheritors of the 1968 movement are marching under the slogans “Porros out of schools! Stop violence against students! In defense of free public education! We are missing 43 and thousands more!” They have proposed a nation-wide student strike for October 2.

“50 years after the 1968 movement and 4 years after the forced disappearance of the 43 Ayotzinapa students,” the Assembly representatives wrote, “we call on the participation of our fellow students, youth, professors, workers, and different popular fronts that comprise this genuine and legitimate movement for the defense of public, free, autonomous, and emancipatory education.”

Hilary Goodfriend is a writer and researcher currently based in Mexico City, where she is a doctoral student in Latin American Studies at the National Autonomous University (UNAM).