While Cuba’s constitutional reform could help democratize the country, a new recently-enacted decree could lead to increased governmental censorship and repression in the arts. 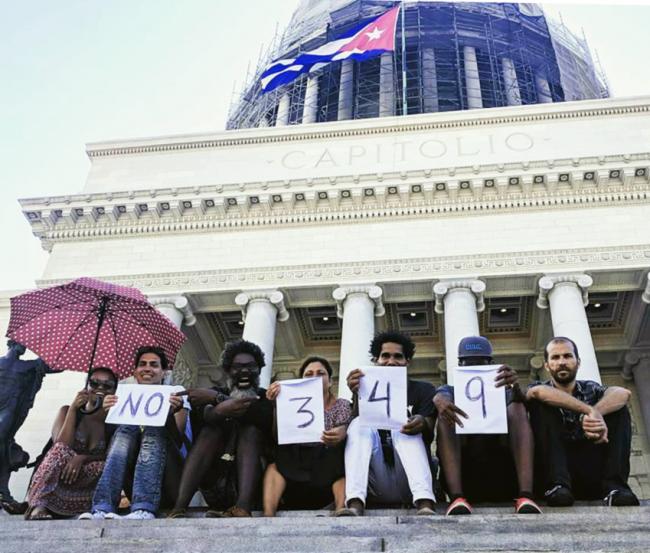 During his time as president, Raúl Castro announced a series of reforms. One of these was to overhaul Cuba’s 1976 constitution, which was drafted at the height of Cuban socialism and has long been out of sync with the country’s post-Soviet reality. In July, Cuba’s National Assembly unveiled a proposed version for  the new constitution. This draft will undergo a process of public debate throughout the fall and should be ratified in February 2019.

The constitutional reform has intensified debates on the island about rights, citizenship, and the new economy. This essay forms part of a running forum NACLA is hosting to offer a range of views on this crucial process at a critical moment in Cuban history. Read part one of the forum here.

While not strictly about the new constitution, Coco Fusco’s timely essay delves into closely related questions of governance and legal reform, addressing a controversial new decree to regulate the arts and freedom of expression.

The recently announced constitutional reform process in Cuba includes unprecedented proposals that have attracted international attention. At the same time, the Cuban government is continuing its standard procedures for generating new laws. Among the many decrees that appeared in the Cuban Ministry of Justice's Gaceta Oficial on July 10, 2018 is Decree 349, which targets the island’s artistic community. Signed by President Miguel Díaz-Canel this April, the decree arises from closed-door discussions between the Council of Ministers and the Ministry of Culture. The laws it details are slated to go into effect in December 2018. This comes at the same time as the appointment of a new Minister of Culture, Alpidio Batista Alonso Grau, whose last job was in the Ideology Department of the Central Committee of the Cuban Communist Party.

Although the foreign press is heralding a more liberal era because the new constitution legalizes gay marriage and eliminates the word “communism” from the new constitution, for many in Cuba, these changes signal that a more hardline approach to culture has returned to the island.

The decree outlines a series of restrictions and punitive measures to be imposed on artists, filmmakers, musicians, performers, and writers who operate without authorization from the Cultural Ministry, as well as for proprietors that offer venue space to artists who seek to present their work without this permission. Decree #349 has generated an outpouring of protests from arts professionals inside and outside the island. On August 24, Amnesty International issued a statement of concern about the arbitrary detentions of artists engaged in protests against the decree in Cuba. Such widespread protests in the artistic community have not been seen since the “Email War” of 2007, when scores of Cuban intellectuals spoke out on the Internet against the reappearance of Luis Pavón Tamayo—a former director of the National Council of Culture and leading Cuban censor—in the Cuban media.

Decree 349 focuses on artistic activities that emanate from Cuba's growing independent cultural sector. It criminalizes the public presentation and commercialization of art, music, performances, and publications carried out without prior authorization of the Ministry of Culture. It transforms a burgeoning cottage industry of apartment-art galleries—workshops, recording studios, and private clubs all housed in private homes— into sites of potential liability. While much of the language of the decree focuses on the illegality of pornographic, violent, and discriminatory content as well as unacceptable noise levels, the most vague and politically-charged punishable category refers to “contents that are damaging to ethical and cultural values.” That rhetoric comes close to the terms used in the Cuban penal code to describe “social dangerousness” (peligrosidad predilectiva) as behavior that contradicts “socialist morality,” language that  has been used to entrap artists that manifest attitudes critical of their government.

Decree 349 will also empower a new cadre of roving state agents to shut down events, confiscate artists’ equipment and property, impose heavy fines, and make arrests if they determine that the cultural activities merit sanction. The decree limits the ways that artists can appeal decisions made against them, leaving them without any access to independent arbiters in the event of a dispute. Fines for infringements start at 1,000 Cuban pesos, which amounts to about $40 USD, or 1.5 months of salary for the average Cuban worker. The greatest risk, however, is that artist's equipment and even homes can be seized  as a punishment. Many of those who are targeted by the decree have struggled for years to secure funds for equipment they use to record or perform, and that equipment is what ensures that they can eek out a decent living in a very fragile economy.

While Decree 349 doesn’t explicitly state which musical forms are likely to be punished, the language of the decree, with its many references to unsavory lyrics, high volume, unlicensed performers, and privately owned performance venues, makes it quite apparent that reggaeton musicians and rappers will take disproportionate heat. In recent years, many Cuban officials have decried the influence of reggaeton, which has displaced other popular Cuban dance music such as Timba. Just a few months ago, the former Minister of Culture Abel Prieto openly attacked reggaeton and other popular culture available through the paquetes of pirated media that circulate Cuba, calling them "chatarra" (junk) and a threat to the revolution's values. While the state-run Cuban music industry does not support reggaeton and rap, the genres are wildly popular among Cuban youth. Cuban rappers and reguetoneros are also for the most part self-taught, Black, and from humble origins. Their music speaks to the experience of a disenfranchised and frustrated underclass that the Cuban government is keen to keep in check to avoid large scale social unrest.

Moreover, many opponents to the decree on the island have pointed out that their professional success in the independent cultural sector has made it possible for them to support their families—and that in most cases they do not have relatives abroad who can send them remittances or properties that they can convert into tourist-oriented businesses.

Since the publication of Decree 349 in July, several artists in Cuba have staged performative protests in the street and online. In early August, artists Luis Manuel Otero Alcantara, Amaury Pacheco, and musician Soandry Del Rio were arrested during a performance in front of the Capitolio building in Central Havana. On August 11, curator Yanelys Nuñez Lleyva and Otero Alcantara were detained by police to prevent them from hosting a concert in protest of the decree, and more than a dozen musicians were beaten and herded off stage by Cuban police. A small but well-organized group of artists-activists and musicians have produced an informational video and a “No to Decree 349” poster campaign featuring cultural figures from both the diaspora and the island that is circulating on social media. David D. Omni spearheaded the production of a protest song featuring several rappers, and the music video is circulating on the internet. Meanwhile, artist Sandra Ceballos, founding director of Cuba's oldest independent art space, Aglutinador, published a letter critical of the decree, calling on more Cuban artists to join an effort against laws that she believes return the arts community to the repressive conditions of the 1960s and ‘70s.

I am a member of a team that posted an open letter to President Díaz-Canel, calling for a meeting between Cuban artists and government officials to reconsider the decree. This letter has to date accumulated 1152 signatures. Last week the artists group, with the assistance of attorney Laritza Diversent from the Cuban human rights organization Cubalex, submitted a formal complaint to the Attorney General, the President of the Popular Power National Assembly, the President of the Commission on Constitutional and Judicial Affairs, and the President of the Council of Ministers.

As of this writing, no government official has responded to the outcry from the arts community beyond the arbitrary detentions of some of the protestors. It would seem that the state views the artists as a security threat: police have told the detainees that Cuban law enforcement is carrying out orders from the Ministry of the Interior's counter-intelligence unit, but that there are no formal charges against them.  In a recently-leaked  memo, Yansert Fraga León, Communications Director for the Ministry of Culture, described the protests as a "provocation"orchestrated by “so-called artists” paid by foreign interest who seek to confuse the country's “true artists.” Fraga León goes on to say that the Ministry of Culture has started a counter-campaign on social media under the hashtag #PorQueHaceFaltael349 (Why 349 Is Needed), housed on the Facebook page of Lillitsy Hernandez Oliva. Cuban state-sponsored blogs such as La Jiribilla have featured ad hominem attacks on the artists who have protested, suggesting that they are not real artists, or that their complaints are hysterical and irrational.

On the other hand, a few artists outside of the activist group have responded creatively to the decree: for example, the theater group El Ciervo Encantado posted a video of the  actress Chela Cuestarriba in kitschy attire, who scrutinizes graffiti with a magnifying glass and then offers a lecture to future Decree 349 inspectors on how to do their job. Artist Lázaro Saavedra has circulated satirical emails among Cuban artists, such as one on August 18 declaring a new Decree, 350, which prohibits any attempt to discredit Decree 349 and offers a "stimulus package" for those who obey Decree 350 that includes access to prostitutes, drugs, illicit business and yacht rides in waters prohibited to Cubans. These notable responses notwithstanding, there is no mass movement against the decree, which activists say is a sign of widespread fear of retribution.

Those outside Cuba may wonder what incentive the government has for clamping down on artists,  that Cuban cultural offerings are a major point of attraction for tourists and that Cuban art remains one of the revolution's few globally recognized success stories. Yet I would argue that the very fact that Cuban art is so successful internationally explains why the state would seek to maintain hegemonic control over its distribution. Artists in Cuba do enjoy liberties and benefits that many others yearn for: they have a professional justification for traveling, working independently, and socializing with foreigners, plus they make their money in hard currency and in many cases are among the most affluent of Cuban citizens.

During the extreme hardship years of the Special Period, artists were among the first Cuban freelancers to be allowed to sell their art for hard currency without a move by the government to entice younger artists to remain in the country when thousands of artists were fleeing. In doing so the state could maintain its claim to being a cultural superpower. In the last decade, the legalization of cell phones, the growth of internet access, the influx of digital media and the elimination of exit visas have worked together to empower Cuban artists, regardless of their pedigrees or political affiliations. Independent artists can now produce and distribute works, fundraise, and travel on their own—allowing them in recent years to be less reliant on powerful bureaucrats and union affiliations to engage in their trade. At the same time, consumption of state-produced Cuban culture and media is on the decline. The Cuban government relies on an influx of foreign capital to stay afloat, but it now has to contend with the political effects of a somewhat mixed economy and the growth of many freelance sectors. Sadly, the state appears to be taking a hard line instead of recognizing the symbolic benefits of a thriving and diverse independent culture.

Coco Fusco is an interdisciplinary artist and writer. She is the author of Dangerous Moves: Performance and Politics in Cuba.