The Emergency Isn’t Over

A year since the Sept. 19 earthquakes roiled Mexico, homeless communities fight for their rights to habitable housing. 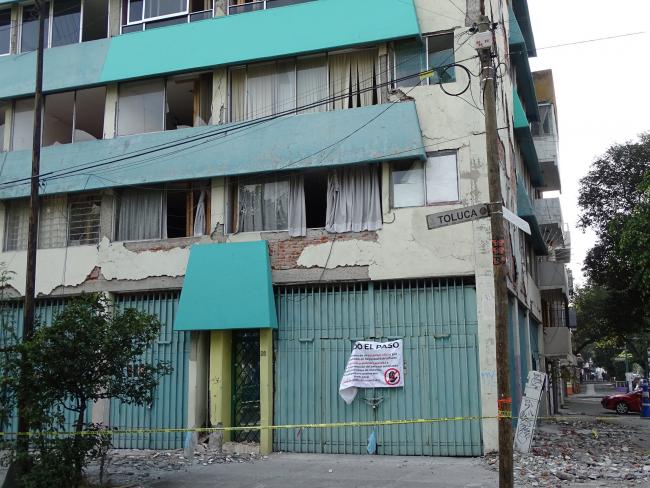 “As long as one single neighbor is still displaced from their home, the crisis that started with the earthquake continues,” says Gabriel Macías of the Tlalpan United group of neighbors whose apartment complex collapsed in the Sept. 19 earthquake. Around him crowd dozens of journalists, neighbors, and members of the “Topos,” the moles, Mexico City’s volunteer rescue crews.

As the midday sun beat down, representatives of the neighborhood organization joined the United Earthquake Victims of Mexico City (Damnificados Unidos) to block Tlalpan Avenue, one of the city’s busiest streets, calling for an effective reconstruction strategy. A year after the 7.1 earthquake that destroyed their homes, many still don’t have a place to live. The signs and comments displayed their rage at the government’s slow response to their needs.

Macías voiced the frustration, saying that city authorities mislead residents of the Tlalpan apartment on numerous occasions, but “they could not divide us or marginalize us for one reason: our struggle is just and has no objective other than to return to our homes.”

As he finished his remarks the crowd began to chant, “Damnificados unidos, serán reconstruidos,”—“Victims organizing together, we will rebuild.”

Hundreds of people joined the Tlalpan families to commemorate the earthquake and observe a minute of silence at 1:14 p.m. Following the silence, the city-wide earthquake alarm blared at 1:16 pm in a planned drill staged at the moment the ground started shake in 2017. The protestors raised their fists, the symbol used during rescue efforts to call for silence when rescue workers heard signs of life under the rubble. As the alarm echoed through the crowd, some broke into tears, while others stared steadily ahead.

In the morning, Tlalpan United held a mass for the earthquake victims who have died in the past years, who were never able to return to their homes. Nine white wreaths represented the nine people who died in the Tlalpan apartment complex, two of them children. Members of Tlalpan United wore simple white t-shirts with the image of a fist raised in the air, reading, “Reconstruction now! The emergency isn’t over.”

The earthquake that rocked the capital city and surrounding states, killed 369 people in Mexico City and surrounding states. Hundreds of families remain displaced, waiting for their damaged apartments and houses to be repaired or new homes provided. Many expressed frustration with the ineffectual measures of the government and anger at the corruption behind the loss of lives and property.

An in-depth report from the non-profit Mexicans Against Corruption and Impunity found that developers often circumvented the strict building codes implemented after the 1985 earthquake. In several case, structures built in the last 15 years collapsed and inspectors discovered that developers had used sub-standard construction materials.

In other cases, older buildings were gradually modified over the years, without complying with building codes. Authorities had ordered a billboard removed from the top of a building in the Piedad Narvarte neighborhood in 2015. The billboard was left standing and was an “aggravating factor” when the building collapsed on September 19, killing 11 people.

In recent years, September 19 has been a day of quiet reflection and remembrance of the more than 10,000 people who lost their lives in 1985, but after a devastating new quake struck on the same day 32 years later, it became a day of protest and calls for justice. The families of the Tlalpan apartment complex denounced an inefficient and slow reconstruction process. They criticized government programs that require victims to take out credit for their new apartments and called for publicly funded reconstruction.

Following the gathering at the Tlalpan complex, Damnificados Unidos led a march into Mexico City’s main plaza, the Zócalo. Hundreds more victims from the Iztapalapa, Xochimilco, Benito Juárez, and Cuauhtémoc neighborhoods showed up with signs, chants and their own demands for justice for those responsible for the hazardous construction and overdue reparations to victims.

The negligence and corruption of city officials both before and after the earthquake has angered Mexico City residents and earthquake victims.

While developers were often at fault, few have faced charges for their roles in deadly building collapses. In the heart-wrenching case of the Rébsamen school in Tlalpan that left 19 children and nine adults dead, only one of the Directors Responsible for Construction has been arrested. The others, including the director of the school, Mónica García who is listed on Interpol, fled the scene.

Following the natural disaster, grieving victims and family members were forced to confront the Mexico City bureaucracy. While funds poured in from around the world to help earthquake victims, and the federal government announced that over $2 billion would be dedicated to reconstruction, many victims have waited for months to receive support.

A year later, victims are left wondering what happened to all that money. Recent investigations offer a few clues and paint a picture of an inept and corrupt bureaucracy.

Huffington Post Mexico found that the director of the Reconstruction Commission of the Secretariat of Public Works, Edgar Tungüi Rodríguez, has given friends and family members contracts for reconstruction projects.

The Mexican non-profits Fundar Center for Analysis and Investigation and Transparencia Mexicana released a report on September 17 that found a lack of transparency in public information that makes it impossible to fully assess the effectiveness of reconstruction efforts. The report states that public information, “is disperse, insufficient and does not have the quality needed to be able to catalyze coordination between government, civil society and the private sector.”

Animal Político and Radio Ambulante both also reported on the inefficient, confusing process to rebuild damaged schools in the capital. One mother complained that her daughter’s school had been inspected 10 times, but the government had yet to begin reconstruction. Meanwhile, the students attend class under tarps.

The Mexico City Human Rights Commission (CDHDF) released a report on Tuesday, September 18, that found that city officials routinely violated the human rights of earthquake victims. The report calls out the lack of a comprehensive Risk Atlas for the city, the failure to follow-through in investigating who was responsible for collapsed buildings, and insufficient protocols for rescuing victims.

While most attention goes to the capital, the situation is also dire for victims of the September 7, 2017 earthquake in Oaxaca and Chiapas, and communities in Morelos and Puebla hit on September 19.

The incoming administrations of Claudia Sheinbaum as Mexico City mayor and president-elect Andrés Manuel López Obrador will inherit the maligned reconstruction programs. Their supporters and critics will be watching closely to see how they manage the ongoing recovery process.

On September 19 in Juchitán, Oaxaca, López Obrador announced he will commit over 500 million USD to the National Reconstruction Program.

After 1985, neighbors organized to demand housing from the government to avoid being displaced from Mexico City. The right to housing in the city has become more urgent as real estate speculation and gentrification take hold in many Mexico City neighborhoods. While some earthquake victims were middle or upper class, many are working class and lack the resources to relocate. These victims are falling through the cracks in the haphazard reconstruction process.

The city government allegedly used armed thugs to violently displace an Indigenous Otomí community from a damaged building at Roma 18 in the Juárez neighborhood the day of the one-year anniversary. The Otomí families, who migrated to Mexico City from Querétaro, have lived in the historic building that once housed the embassy of the Spanish Republic in Mexico for the past two decades.

The building had already suffered damages over the years. But the 2017 earthquake further compromised the structure and many families moved out into an encampment on the street. The Otomís have resisted attempts to evict them, as the city contends they are illegally occupying the building.

Yet on the morning of September 19, police arrived and evicted the Otomí families. Their status as earthquake victims was not enough for the city authorities to respect their right to housing.

The new MORENA government in Mexico City will have to confront the ongoing environmental and social changes that drive displacement. The Sept. 19th earthquake last year showed an urban community capable of coming together to support each other in a natural disaster, but it also proved an opportunity for further corruption and land grabs by government officials and private interests eager to push people out of their communities and redevelop as real estate value in the city rises. As several of the victims said, the fight for the right to housing for victims of natural disasters that began in 1985 is as necessary as ever.

This month, Mexico City’s new Constitution quietly went into effect, which guarantees the “right to adequate housing for every person and their family, adapted to their necessities.” In coming months and years, city authorities will have to commit to its robust execution or else the right to housing will come to resemble the city’s building codes—good on paper but dangerously lacking in implementation.

This piece was originally posted by the Americas Program.

Martha Pskowski is a bilingual freelance journalist based in Mexico City. She reports on the politics of urban and environmental change in the Americas. Her work has appeared in The Guardian, The New Republic, Sierra, City Lab, and over a dozen other publications.