The Most Important Presidential Race in Brazilian History

The strength of far-right demagogue Jair Bolsonaro in the first round of the Brazilian elections puts the country well on its way to being the next victim of a reactionary-populist international groundswell. 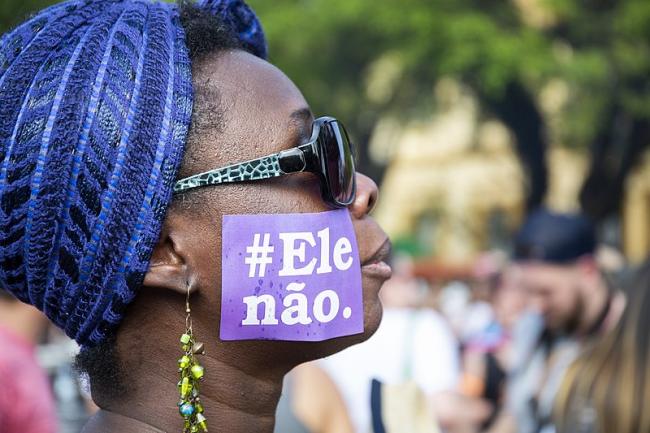 The unexpected strength of the far-right demagogue Jair Bolsonaro in the October 7 Brazilian elections sent shockwaves throughout the country. Capturing 46% of the popular vote in the first round of the presidential contest, Bolsonaro now faces a run-off race on October 28 against Fernando Haddad of the Workers’ Party, who trailed with 29.3% of the votes.

Ciro Gomes, the center-left candidate of the Brazilian Labor Party polled 12.5%, while three presidential candidates from the center-right garnered less than 7% and lost considerable strength in Congress. Many observers consider their poor showing as a rejection of the policies of the Michel Temer government that came to power in 2016 after the impeachment of President Dilma Rousseff of the Workers’ Party, in what has often been referred to as a soft or parliamentary coup.

The first post-election poll places Bolsonaro in the lead 58% to 42% against Haddad. Brazil is unquestionably at a crossroads. If a pro-democratic front led by the Workers’ Party doesn’t hold back the conservative wave, Brazil will be the next victim of the reactionary- populist international groundswell.

During his 26-year career as a legislator, Bolsonaro, a former army captain who defends neo-fascist ideas, has created an image of himself as a hardline and vocal opponent of the Brazilian left, feminism, Afro-Brazilians, LGBTQ+ people, and the social and cultural changes that have accompanied the country’s democratization process over the last four decades.

He has publicly commented that his children wouldn’t marry black people because they were well brought up, and that if a son were gay, he would beat him up. He voted against granting labor rights to domestic workers, and denounces teaching “gender ideology” in public schools. During the 2016 vote in favor of impeaching Dilma Rousseff, he unabashedly defended the military dictatorship and praised the notorious torturer of the president when she was incarcerated in 1970 for her opposition to the authoritarian regime.

Although a self-styled “nationalist,” Bolsonaro has anointed Paulo Guedes, a University of Chicago-trained neoliberal economist, as his main economic advisor. His policy recommendations include privatizing almost all state-run companies and opening up the Amazon to foreign development. Ironically, while Bolsonaro’s campaign relies heavily on an anti-corruption discourse, Guedes is currently under investigation for possible securities fraud.

Left-wing activists were stunned by the results. Nonetheless, there are many factors that explain the growth of the far right in Brazil. The Great Recession of 2008 reached Brazil several years after it created economic turmoil in the United States. The country is still facing record unemployment, which in turn has caused an uptick in crime. Bolsonaro’s law-and-order rhetoric appeals to many voters who fear urban violence.

The 2013 June mobilizations, which began as a protest against a 20-cent bus fare hike in São Paulo, ballooned into protests throughout the country with a highly eclectic social and political composition of its participants. Many who took to the streets called on the Workers’ Party-led government to expand spending on social services, education, and transportation, rather than investing in stadiums for the 2014 World Cup. By mid-month, however, right-wing youth had joined the mix and explicitly called for an end to the Rousseff’s rule.

The former left-wing guerrilla fighter managed to win reelection in 2014, but she soon became entrenched as the Right challenged the election results and then moved to impeach her based on dubious charges of budgetary mismanagement. The center-right government that followed implemented a neoliberal economic plan designed to slowly dismantle the social welfare state that had been strengthened since Luiz Inácio Lula da Silva became president in 2003.

At the same time, a string of investigations, known as Operation Car Wash, alleging the Workers’ Party’s involvement in money laundering and kickback payments, severely tarnished its image and fueled anti-politician sentiment. While moving quickly against the Left, the judicial system spared suspected center-right politicians from any serious corruption investigations.

To prevent Lula from being a candidate in the 2018 elections, Sérgio Moro, the judge heading Operation Car Wash, sped up investigations against the former president, ultimately seeing him condemned to 12 years in prison for allegedly receiving an apartment in exchange for favors given to a contractor.

Jailed in April, Lula’s popularity as a presidential hopeful increased from 30% to 39%. This alarmed the tendentious Supreme Court, which barred Lula from running for president from his jail cell, based on the Clean Slate Law that prohibits people whose conviction has been upheld in an appeals court from running for a public office, even if the case is still under consideration in the Supreme Court.

The country’s highest judges also ignored a finding by the United Nation’s Commission on Human Rights that defended Lula’s right to stand for office. After carrying out a series of unsuccessful appeals and waiting to the last minute, Lula chose Fernando Haddad as his successor.

Haddad, a mild-spoken lawyer and professor of philosophy of Lebanese descent, had served as the Minister of Education for six years under Lula’s administration. He is credited with carrying out a massive expansion of public universities, which coupled with affirmative action programs has resulted in a dramatic increase of Afro-descendant and indigenous students in higher education. As mayor of São Paulo from 2012 to 2016, he tried to rethink the metropolis’ transportation problems, and was recognized internationally as one of São Paulo’s best mayors. Yet, he failed to win reelection, as anti-Workers’ Party sentiment grew in 2016 in the aftermath of Rousseff’s impeachment.

With less than three weeks before the next round, Haddad has shifted more to the center to attract voters who have traditionally supported the Brazilian Democratic Movement and the Party of Social Democracy, which formed the core Michel Temer’s current government. These parties’ poor showing in the polls and a split between their moderate and conservative wings have meant that many of their politicians have thrown their support to Bolsonaro. The sharp drop in the number of their congressional candidates elected to office is also a sign that voters have lost confidence in their legitimacy to govern.

Perhaps Haddad’s core ally at this point is Ciro Gomes of the Brazilian Labor Party and the former governor of the northeastern state of Ceará, who has offered critical support to the Workers’ Party’s candidate. Northeastern Brazil, which has historically has been the poorest and most underdeveloped region of the country, benefitted tremendously from Lula’s and Rousseff’s social programs, beginning with the Bolsa Família cash transfer to low-income families with children in school. Haddad won the majority in all of the state from this area. However, Bolsonaro captured a majority of votes from the country’s other regions.

International alarm about the election has motivated renowned sociologist Manuel Castells to issue an open letter, which begins: “Brazil is in danger. And with Brazil the world. Because after the election of Trump, the coming to power of a neofascist government in Italy and the rise of neo-Nazism in Europe, Brazil could elect a fascist to the presidency, who defends the military dictatorship, is misogynist, sexist, racist, and xenophobic…”

Seventy-five academics based in the United States have issued a manifesto expressing their fear that Bolsonaro’s “proposed policies would effectively undo all of the political, social, economic, labor, and cultural gains of the last four decades, efforts by social movements and progressive politicians to consolidate and expand democracy in Brazil.” Now collecting support in U.S. universities, the organizers of the initiative plan to release the text with several thousand signatures a week before the elections.

Should Bolsonaro win the popular vote at the end of October, he will have the backing of a conservative majority in the Congress to carry out his far-right agenda. Should the Left manage to flip the projected outcome and elect Haddad to the presidency, it will undoubtedly be a weak government. If social polarization persists regardless of who governs, the armed forces will be waiting in the wings ready to seize power.

James N. Green is Professor of Brazilian History and Culture at Brown University and author, among other books, of We Cannot Remain Silent: Opposition to the Brazilian Military Dictatorship in the United States (Duke University Press, 2010).