Ahead of his inauguration, president-elect Andrés Manuel López Obrador (AMLO) has warmed up to NAFTA as he eyes fossil fuel expansion. 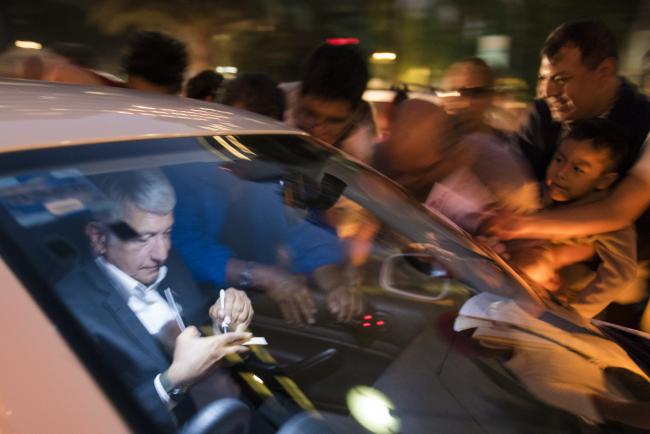 Shortly after winning Mexico’s presidential election in July, Andrés Manuel López Obrador (AMLO) sent a warm letter to U.S. President Donald Trump, urging a swift conclusion to the NAFTA renegotiations. He didn’t lay out any clear principles or overarching interests that would inform the talks, just that they should wrap up as soon as possible so as not to deter investment. Trump deemed AMLO a “terrific person” after they spoke by phone, and he sent a letter in response that largely echoed AMLO’s sentiment about concluding the talks quickly.

In contrast to his vocal opposition to both Trump and NAFTA prior to his election, this conciliatory approach seemed to smooth the path for negotiations in the ensuing weeks. The U.S. and Mexico wrapped up a bilateral deal at the end of August, which increased the stakes for the trilateral negotiations that included Canada. The three parties reached an agreement at the end of September.

The renegotiated NAFTA agreement is largely a continuation of the old agreement, with some notable changes to automobiles and dairy, as well as some positive revisions watering down corporate rights. However, the negotiators were careful to preserve protections for the oil and gas industry, language that will ensure the fossil fuel industry maintains access to Mexico’s oil reserves. AMLO’s support for the recent deal is a signal that he has no intention of attacking the underlying logic of NAFTA—or of neoliberal logics—despite his long history opposing much of the treaty. More importantly, it clears the path for him to pursue an even more troubling aspect of his agenda: enormous public investments in fossil fuels.

AMLO’s criticism of NAFTA has characterized much of his recent political career, particularly during his 2006 campaign for president, when he cited the devastation the trade deal would have on Mexico’s small farmers, helping him to gain the support of that base. By 2017, however, he had changed his tune. NAFTA “didn’t hurt, but it wasn’t the panacea,” AMLO said in a March 2017 interview with Bloomberg News. “It’s not our salvation.” He struck a confident tone on his ability to renegotiate the deal, criticizing current President Enrique Peña Nieto. “Peña is too quiet. And Donald Trump speaks very loudly,” he said. “One doesn’t beg for liberty, one seizes it.” Yet Peña Nieto was able to quickly complete the renegotiations, meaning AMLO won’t have to when he steps into office, providing him some political cover by not requiring him to stick his neck out in support of a free-trade agreement that is so divisive, particularly on his left flank, and freeing him up to pursue other objectives.

Eager to put a nationalistic stamp on North American trade, President Donald Trump triggered the renegotiation of NAFTA in 2017. The confused effort has been riddled with contradictions. Trump has repeatedly called NAFTA the “worst trade deal ever made” but the core of NAFTA is preserved in the new agreement. Meanwhile, many of the updates in the new treaty, or NAFTA 2.0, are copied from the Trans-Pacific Partnership (TPP), a proposed trade deal that Trump loathed—withdrawing from it was one of the first things he did as president. Corporate elites in all three countries feared Trump would blow up free-trade, while environmentalists and labor saw a great deal of danger in a negotiating process led by plutocrats. In the end, the changes from the original NAFTA are not so dramatic.

To be sure, there are actually some positive revisions to the new NAFTA deal. For example, the revised agreement significantly curtails corporate power by eliminating the so-called investor-state dispute resolution (ISDS) process from the old NAFTA, which gave multinational corporations far-reaching rights and authority to sue governments in international tribunals if they passed laws that they saw as violating investor’s rights, even if the laws were aimed at protecting the public interest. The ISDS system “formally prioritizes corporate rights over the right of governments to regulate,” according to Public Citizen.

Multinational corporations have used the ISDS system to undermine protections relating to tobacco, climate, mining, pharmaceuticals, energy, pollution, labor, and a long line of other important sectors. For instance, TransCanada sued the U.S. government in late 2015 using the ISDS process after the Obama administration denied it a permit for the Keystone XL pipeline, demanding damages not just for the expenses that it incurred, but also for its “expected future profits.” Ultimately, the case became a moot point after the Trump administration approved the project, but it is illustrative of how ISDS can be used to curtail sovereignty, elevating corporate rights above those of the public.

However, there is a special carve-in for the fossil fuel industry in Mexico that allows nine U.S. companies that have been awarded contracts for oil and gas drilling to be grandfathered in using the old ISDS system. In other words, these companies and their investments will be able to sue the Mexican government if they do something the companies deem as harmful to their profits. This will significantly constrain Mexico’s ability to regulate these companies and their investments. The provision does not affect the U.S. or Canada and is narrowly focused on Mexico.

This exemption presented AMLO with a predicament during the negotiations over the summer. He opposed energy sector liberalization under Peña Nieto, which opened up the door for international oil and gas companies. During his campaigns, he flirted with the idea of reversing the reforms, suggesting he would initiate a public referendum on overturning the energy reforms, an idea he has since shelved. Last year, he hinted at revising awarded oil and gas contracts, but as the presidential campaign began in earnest, he struck a moderate line on this issue, suggesting he would honor the contracts as long as they were not awarded in a corrupt manner.

Ultimately, though AMLO’s advisors reportedly pressed to remove the ISDS carve-in in NAFTA 2.0, he decided to concede this point in the interest of pushing the talks over the finish line, backing the bilateral document with the U.S. when it was announced in August. “We put the emphasis on defending national sovereignty on the energy issue and it was achieved,” AMLO told reporters. “We are satisfied because our sovereignty was saved. Mexico reserves the right to reform its constitution, its energy laws, and it was established that Mexico’s oil and natural resources belong to our nation.”

AMLO was not without leverage. He does not take office until December, but the Mexican Senate will be responsible for ratifying NAFTA 2.0. AMLO’s stunning and overwhelming electoral victory, which granted his party, Movimiento Regeneración Nacional (National Regeneration Movement, MORENA), sweeping majorities in both chambers of the Mexican Congress, meant that Peña Nieto needed AMLO to sign on to the trade talks for them to move forward.

But AMLO deciding to support the new agreement will not go unnoticed by his supporters. AMLO has preached against neoliberalism and NAFTA for years, even authoring a book entitled Neoporfirismo, likening today’s neoliberal policies and their enrichment of a corrupt elite to the era of Dictator Porfirio Díaz, who presided over a period of vertiginous inequality that preceded the Mexican Revolution. Just as then, AMLO argues, the state today works hand in hand with investors and corporations, enriching the few at the expense of the many.

Signing on to NAFTA will be hard to square with his narrative of enacting a new kind of politics. In practical terms, reviving the livelihoods of small farmers, for instance, will be virtually impossible within the confines of NAFTA 2.0. Just as with the old treaty, heavily subsidized corporate agriculture from the U.S. will continue to flow into Mexico, suffocating small farmers. AMLO knows this, of course; he repeatedly denounced the treaty precisely because it slanted in favor of major corporations in this way. Yet now he seems willing to accept the treaty in order to move on to other objectives. It is unclear if he will pay a political price for this about-face, but one of his motivations to see the treaty completed under Peña Nieto’s tenure is to minimize the scrutiny aimed at him.

At the same time, AMLO has changed his tune on the prospect of multinational oil companies drilling for oil and gas in Mexico. In contrast to many of the promises made during his campaigns, he has sent signals over the last several months that he would not revoke or invalidate the contracts awarded to the likes of ExxonMobil, Chevron, and Royal Dutch Shell, among others. In that sense, his willingness to support the carve-in in NAFTA 2.0 for those deals was a matter of political expediency. He could pocket the real and significant reforms on ISDS, while also removing the trade issue from his desk as he assumes office later this year.

With NAFTA 2.0 done, AMLO intends to spearhead some of his top priorities, including revitalizing Mexico’s oil refining business through its state company, Pemex. Pemex has presided over a decline in both oil production and the refining of oil into gasoline, leaving Mexico increasingly dependent on imported gasoline from the United States.

However, instead of an agenda that would seek to decisively break Mexico’s dependence on fossil fuels, he is doubling-down on it—at great public expense. He has proposed to invest 75 billion pesos (around $4 billion) in Pemex, hoping to revive the state-owned company’s flagging oil production. He also wants to spend 49 billion pesos ($2.6 billion) to upgrade Pemex’s existing refineries, plus 160 billion pesos ($8.6 billion) to build a new refinery from scratch.

The plan echoes the ways that left-wing governments have consistently approached natural resources over the last century—state-ownership of oil and gas reserves and state-controlled extraction. That approach makes sense in the context of rapacious multinational companies profiting from public resources and leaving little wealth for the host country, but it is also increasingly out of date given our current climate crisis. Re-inflating the fossil fuel bubble, even in the name of public ownership, adds to the problem, especially since the billions of dollars AMLO intends to spend on refineries and more drilling could be put to better use.