A Dark Hour in Brazil

Jair Bolsonaro has propelled anger and vitriol against the Left, the poor, and so-called identity politics to the surface of Brazilian society. After his win, what’s next? 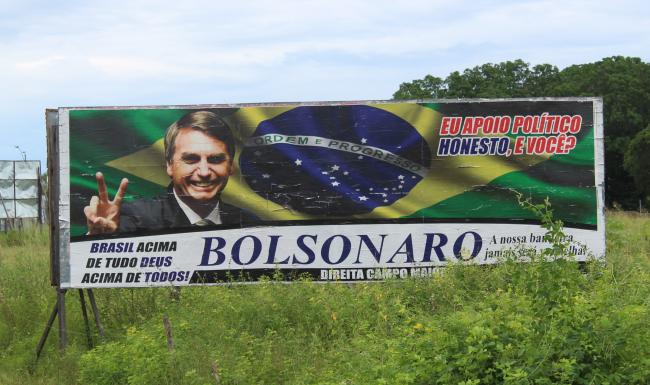 Brazilians woke up this Monday morning to a nearly unrecognizable country in the aftermath of the most polarized election in generations. On one side, retired captain Jaír Bolsonaro, a self-styled strongman and defender of torture from the far-right promising to rid the country of crime, leftism, political correctness, and red tape. Powered by WhatsApp bots, and fueled by anti-workers’ party sentiment, this was no ordinary right-wing campaign: there were no televised debates, few rallies, and an almost entire absence of god-and-country swag like bumper stickers. On the other side was Fernando Haddad, university professor, the former Mayor of São Paulo and a former Minister of Education. The son of Lebanese migrants and soft spoken to a fault, Haddad, who had only been the official candidate for a month, headed a diverse pro-democracy coalition to try to stave off the country’s descent into authoritarianism.

After a nearly-decisive victory on October 7, in which the level of Bolsonaro’s lead surprised most observers, the country headed to the run-off on Sunday, October 28. Bolsonaro won handily, earning 55% of valid votes to Haddad’s 45%, who increased his support from just 28% in the first round. The hard-right wave that Bolsonaro led also brought dozens of anti-establishment far-right candidates to office throughout the country, upturning all expectations and rules of elections. His own party, the previously insignificant Social Liberal Party (PSL), which had just one member in congress in 2010, now holds 52 elected seats in the chamber of deputies and four in the senate, the second largest presence in parliament. Bolsonaro’s son was elected to congress in São Paulo with the highest vote of any candidate in history. Other right-wing outsider candidates elected included a former porn actor, a member of the Brazilian royal family, a conservative newscaster, and twenty former military or police officers. And 18 of the 27 elected governors in this election are conservatives. Social media and coordinated fake news campaigns played an unprecedented role, while the center-right essentially vanished as a potentially moderating electoral presence. This was also a very disillusioned election: over 30% of voters either nullified their vote, voted blank or abstained, the highest figure since the transition to democracy. But most dramatic has been the way that the campaign has brought to the surface an angry vitriol against the Left and activism, against the poor, and against so-called identity politics.

Bolsonaro himself, in the aftermath of the first round election, announced that, once president, he was going to, once and for all, “put an end to all activism in the country.” If people had been worried about his bombast before, it was the escalating rhetoric and increasing acts of violence by Bolsonaro supporters in the days that followed that sent growing numbers into a panic about what the future might hold. The murder of 63-year capoeira teacher, Moa do Katendê, over his support of Haddad was one of a catalyzing number of events. The simultaneous invasion by military and federal police of dozens of public universities on October 25 was another.

In the days before the run-off election, a broad yet uncoordinated effort against Bolsonaro ensued, which was as desperate as it was restless. In many cases, these efforts were motivated less by an endorsement of Haddad than a fear of an eventual Bolsonaro presidency. Joining other groups that had long rejected Bolsonaro, like the #EleNão campaign, countless groups and individuals took to social media, to door-knocking and to street-campaigning. These efforts came from the ranks of anarchists, socialists, communists, environmentalists, feminists, Black, Indigenous, and LBGT activists, trade unionists, artists, professional organizations, students, Christian progressives, and many others From Jews Against Bolsonaro to the Evangelical Front for the Rule of Law, to the Landless Movement there were last-ditch efforts throughout the country to try to stop the descent into authoritarianism.

In the end, though these efforts did have an impact on the polls, increasing Haddad’s showing by 16% from the first round, it was too little too late. By early Sunday evening, fireworks were being lit from the top of luxury high-rises in some of the country’s wealthiest cities as the first results came in. By 7 PM, the contest was over, with Bolsonaro winning by a margin of more than ten million votes. His first pronouncement was a speech that was broadcast on Facebook that returned to his familiar campaign themes of God and Country, the dangers of socialism and communism, the importance of a free market, and attacking the media. Shortly after, he gave a speech that was broadcast on all networks that was more conciliatory, saying he would respect the constitution as president.

It is hard to predict what will happen next in Brazil, but the scenario before us is extremely worrying. First, of course, is the immediate threat to human rights and lives. Bolsonaro supporters are fond of saying that it important to separate his bombast from the actual policies his government will carry out. The problem with that line of argument is that if the weeks leading up to the election are any guide, the extreme-right campaign that he has led has actively inspired many acts of violence and intolerance. It is likely this wave will continue, but now with even greater impunity. Brazil already has only the thinnest protections of rights to begin with—it sadly suffers from alarmingly high homicide and police violence rates; and whatever protections vulnerable populations have had in Brazil will in all likelihood be undone. And even if Bolsonaro himself does not have planned policy items for some of his most outrageous statements—such as declaring leftist social movements terrorism, or decrying the existence of Indigenous territories—he comes into office with a large cohort of ultra-right and anti-establishment politicians who will be competing with each other to find ways to do so. One elected candidate, a former police officer from the Southern state of Paraná, became infamous for his action-movie like campaign videos, while another, a woman police officer from São Paulo frequently showed images of a police raid in which she killed an alleged robber.

It is also probable that many of the social gains of the last two decades—Bolsa Família, the cash transfer program, affirmative action policies, and the expansion of access to education, construction of housing for the poor, improved access to basic healthcare—will likely be reversed or severely reduced under a Bolsonaro administration, which promises to reduce social spending and all manner of “pity policies” for “northeasterners, gays, blacks, and women,” severely reduce economic regulation and workers’ rights, do away with several ministries, and privatize state companies, all  deemed “unnecessary costs.” Bolsonaro’s government program reads like an upside-down catalog of every successful major progressive policy in the country since the 1990s.

But perhaps the biggest change this victory signals is that it definitively reverses Brazil’s process of democratization that began in the 1980s as the country transitioned from a two-decade military dictatorship. Pro-democracy social movements played a central role in both bringing about the end of the regime and in the transition period. Since then, political contests had coalesced around a center-right and a center-left poles, led by the Brazilian Society Democracy Party (PSDB) and the Workers’ Party (PT), respectively.  This political arrangement has essentially been destroyed in the political crisis that has engulfed the country since 2013 and that intensified with Dilma Rousseff’s impeachment in 2016. Not only did institutions lose legitimacy, so did major political parties, paving the way for politicians like Bolsonaro.

But democratization also meant addressing inclusion in this highly unequal country. For the last three decades, social and political forces had organized around a democratic-popular project centered around the PT, something that set them apart from earlier leftist visions in Latin America. The idea was to produce social transformations through democratic means, investing in democratic institutions while also maintaining extra-institutional pressure. Whether speaking of affirmative action in universities, domestic workers’ rights, protection against domestic violence, or educational programs on homophobia in primary schools, the dozen years of PT national administration produced changes, that however small, touched many of Brazil’s inequalities. Despite the fact that the PT advocated a “third way” which was conciliatory and friendly towards capital, these policies provoked conservative backlashes that confronted not only leftist opponents, but democracy itself.

The end of democratization in Brazil harkens back to prior moments in Brazil when social pressures that challenged inequality faced an authoritarian rupture. This is what happened in 1930, and then again in 1964. The first time, it took 16 years until the return of democracy; the second, 21. Now, as we face dark days ahead, with hobbled institutions, weakened political parties, and only the thinnest veneer of protections for the most vulnerable and for dissent, we must remember that Brazil’s democracy, however imperfect, had accomplishments worth defending.

Gianpaolo Baiocchi is an activist and scholar based in New York City, where he directs NYU's Urban Democracy Lab. His most recent book is We, The Sovereign (Radical Futures, 2018).

Marcelo K. Silva is a professor of sociology at the Federal University of Rio Grande do Sul in Porto Alegre, where he directs the research group on associativism, engagement, and contestation.