The passage of two decrees in Argentina that allow the army to respond to transnational threats like drug trafficking and terrorism challenge important demilitarization efforts that ended the country’s military dictatorship. 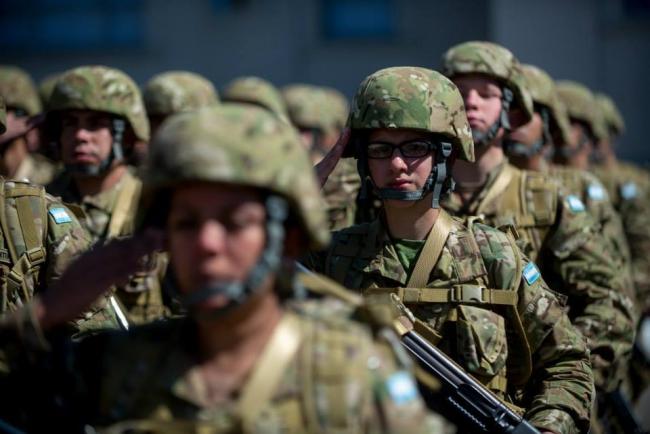 The role of Argentina’s Armed Forces is being redefined in the wake of the passage of two new decrees that threaten to remilitarize the country. Decrees 683 and 703, passed on July 23 and 31 of 2018 respectively, challenge the separation of internal security and national defense as defined by successive governments after Argentina’s democratic transition. The new decrees amplify the likelihood that the Argentinian Armed Forces can be deployed within the country against perceived domestic threats—and carry grave implications.

Decree 683 explicitly states that the national army can respond to any threat originating outside the country but that is present within Argentinian national territory, such as drug trafficking or international terrorism. It changes a 2006 decree that determined the Armed Forces’ mission as combatting military threats originating in other countries. Decree 703, also known as the National Defense Directive, gives the Armed Forces the capacity to formulate strategies against organized crime and international terrorism, citing the increasing transnationalism of South American security issues, such as organized crime and the risk of international terrorism expanding to the region.

The move to broaden the scope of the Armed Forces’ mandate is no surprise considering the language of “military modernization” that President Mauricio Macri has employed since taking office in December 2015. Combating crime is one of his administration’s top priorities, emphasized during his electoral campaign. In his first speech to the Armed Forces as president, he argued that Argentina’s military must adapt to “21st-century demands and requirements.” By this, he meant participating in UN peacekeeping missions, combating terrorism, and inserting climate change into the national security agenda. In his most recent speech to the Armed Forces in May 2018, he argued that the army should support the fight against drug trafficking and organized crime.

Turning this vision into reality has required passing a number of decrees that effectively reverse laws that were integral to Argentina’s democratization. After the end of military dictatorship and the return of civilian power in 1983, the new regime sought to promote an important separation between external security and national defense—the purview of the Armed Forces—and internal security—a function of the police and security agencies. The Armed Forces could act only in the presence of external military threats provoked by other states. This distinction is in no way particular to Argentina: it is present in most of the world’s advanced democracies and has been established in the United States since the Posse Comitatus Act of 1878.

In Argentina, distinguishing between the police and the national army was an important step towards achieving transitional justice in response to the crimes against humanity committed by the Armed Forces during the military dictatorship (1976-1982) under Jorge Videla. During the authoritarian regime, the Armed Forces targeted groups perceived to be communist or left-wing, leading to heinous crimes against humanity and human rights, including kidnapping, torture, enforced disappearance, and familial separation. The repressive government modus operandi was to disappear people who they believed opposed the regime. These people had no right to a proper judgment process: they were brought to military facilities where they would be imprisoned, tortured, and killed. Some 30,000 people were disappeared during this era.

The military dictatorship ended in 1983 in the wake of the Malvinas War. After their defeat, the humiliated military allowed for a democratic opening through elections, which Raul Alfonsín won. The Alfonsín administration revoked amnesty for members of the military, established a commission to investigate disappearances, and tried to hold leaders accountable for crimes against humanity. But the process was stymied due to the ongoing influence of the military and demonstrations by soldiers. This process wouldn’t conclude until the mid 2000s, when Videla, among others, were finally sentenced for crimes against humanity.

Following Argentina’s dark period, a major goal of the democratic regime was to reduce the power of the military and enhance civilian oversight of the Armed Forces. The separation between external and internal security is based on three laws. First, the National Defense law of 1988 determined that the Armed Forces should only be used to combat “aggressions of external origin” in order to preserve Argentina’s sovereignty, territorial integrity, and the life and liberty of its citizens. In 1991, then-president Carlos Menem passed the Internal Security law, which allowed the Armed Forces to support internal security in specific and limited operations, while prohibiting the Armed Forces to participate in planning such operations or acquire equipment and training to perform internal missions. Then-president Fernando de la Rúa built on this law with the 2001 National Intelligence law.

In 2006, Néstor Kirchner strengthened these laws through Decree 227, which explicitly determined that the Armed Forces are limited to preventing “aggressions by other states’ Armed Forces.” It also stated that all attempts to expand the definition of defense in response to the emergence of “new threats” should be rejected.

The fact that the legislation spans various governments suggests that an understanding of the importance of separation of external and internal security goes beyond party lines and is in fact central to the establishment of civilian democracy itself. Non-involvement of the Armed Forces in public security, especially given the horrors of the dictatorship, was an issue of national consensus during the transition to democracy.

Still, under the administrations of Néstor (2003-2007) and Cristina Kirchner (2007-2015), the military began to support missions in the northern provinces of Salta and Jujuy in operations in 2007, and in 2011 through a mission called Escudo Norte (Northern Shield). Both operations took place near the Bolivian border, a region marked by insecurity and the presence of organized crime and drug trafficking. Some analysts criticized these missions for using the military to combat domestic threats.

Political Amnesia? Expanding the Mandate of the Armed Forces

The 2015 electoral campaign showed that the consensus of the separation of internal security and defense has begun to unravel. All candidates, including Peronist candidate Daniel Scioli, defended revising the responsibilities of the Armed Forces and highlighted fighting drug trafficking as a priority, despite the fact that repressive measures and the use of the military against narcotraffickers in other Latin American countries such as Mexico or Colombia has not by any means solved the problem. It has only contributed to the fragmentation and diversification of criminal groups and the expansion of their activities to other countries.

Once in office, however, Macri did not revise the previous legislation, but rather passed decrees to work around the laws. According to a manifesto released by a group of Argentinian political scientists and sociologists, the decrees represent a setback to democracy, because they were passed unilaterally, creating a “climate of uncertainty.”

Nonetheless, Macri began gradually changing the institutional missions of the Armed Forces in 2016 with the Public Security Emergency Decree, which stated that the country is in a state of emergency due to organized crime, and therefore requires exceptional measures be taken. The decree transformed the Kirchner-era Operation Escudo Norte into the Operativo Fronteras (Operation Borders), extending its terms indefinitely. Furthermore, it also allows the Air Force to put a procedure in place to approach, dissuade, and eventually shoot down airplanes—which are often responsible for the transportation of drugs—without proper authorization to fly in the country,.

The decrees passed this summer are the latest and most explicit rejection of the separation between internal security and national defense, rejecting the notion that the military should only be used against external threats. Decree 683 cites Kirchner’s 2006 restrictions on the military as excessively regulatory, constricting the potential of the Defense Ministry, and the Macri government claims that the decree simply corrects the excesses of the Kircher law. Yet José Manuel Ugarte, an Argentine scholar and former congressional staffer who helped to write the 1988 National Defense law, says that in fact the Decree fundamentally changes each of the demilitarization laws passed after the dictatorship, not just the 2006 law.

Shortly after the decrees were passed, Gastón Chillier of the Center for Legal and Socials Studies (CELS), a prominent human rights organization in Argentina told BBC that transnational terrorism and drug trafficking are not urgent threats in Argentina. He also pointed out that military involvement in combating such problems in Colombia and Mexico have not produced effective results, and in fact have often led to increased violence.

Scholar Rut Diamint has stated that strengthening police forces and other security agencies is a more effective route towards addressing these issues than expanding the mandate of the military. Diamint says that the Armed Forces’ equipment and training are inappropriate to deal with civilians in safety missions given their more lethal potential.

Chillier is also concerned that the decrees could contribute to the Armed Forces being used against social mobilizations. Fear of the criminalization of social protest is justified: CELS studies have concluded that police repression has increased under Macri’s government. The studies point out that state violence against strikes has increased and that social movements of aboriginal origin has been repressed. An example is the preventive imprisonment of the social leader Milagro Sala, from the Tupac Amaru organization, who was imprisoned in 2016 on charges of embezzlement before her trial even began. In 2016, the U.N Human Rights Comission deemed her detention arbitrary and demanded her release. Her trial is currently underway. The Ministry of Defense Oscar Aguad has contended that the military would not be used in the streets to contain social protest, but the signs are worrying nonetheless.

The broadening of possibilities for the use of the Armed Forces for internal security purposes is an important change that undermines previous agreements made to regulate their power. That he made the decrees unilaterally rather than passing them through Congress speaks to a concerning lack of democratic process that prevented a national discussion about the role of the Armed Forces. Such a discussion is especially necessary as the shadow of the military dictatorship fades from memory for the Macri administration.

Livia Peres Milani is a Visiting Researcher at CLAS – Georgetown University, and a Ph.D. candidate at University of Campinas, funded by São Paulo Research Foundation (FAPESP).