Regime Change “Made in the U.S.A.”

Trump’s unwavering backing of Juan Guaidó’s shadow government in Venezuela attaches a “made in the U.S.A.” label to all those positioned to govern should Maduro fall. This could scuttle the opposition's chances of maintaining longstanding support among the majority of Venezuelans. 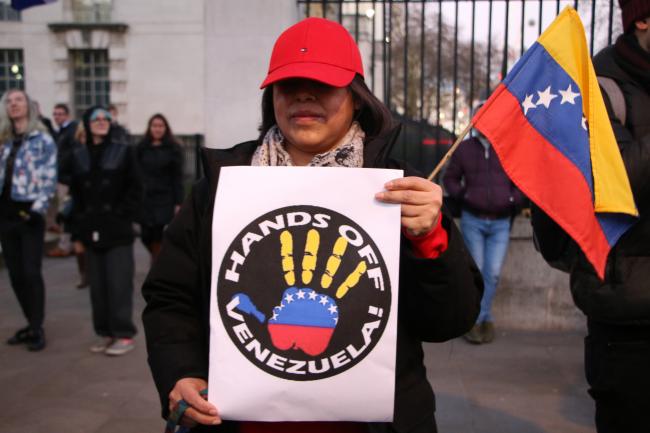 Since its outset, the Trump administration has ratcheted up pressure on Venezuela and radicalized its positions. In the process, the Venezuelan opposition has become more and more associated with—and dependent on—Washington and its allies. An example is the opposition protests that occurred this past Monday. The actions were timed to coincide with the European Union’s “ultimatum,” which stated they would recognize the shadow government of Juan Guaidó if President Nicolás Maduro had not called elections within a week’s time.

The opposition’s most radical sectors, which include Guaidó's Voluntad Popular party (VP) along with former presidential candidate María Corina Machado, have always had close ties with the United States. Guaidó, as well as VP head Leopoldo López and the VP’s Carlos Vecchio, who is the shadow government’s Chargé d’Affaires in Washington, were educated in prestigious U.S. universities—not uncommon among Latin American economic and political elites.The ties between the opposition and international actors are strong: last weekend, Vecchio called the campaign to unseat Maduro “an international effort.” At the same time, Guaidó, referring to opposition-called protests, stated “today, February 2, we are going to meet again in the streets to show our gratitude to the support that the European Parliament has given us.” In doing so, Guaidó explicitly connected the authority of outside countries to his own assumption of leadership.

The outcome of Washington’s actions is bound to be unfavorable in a number of ways, regardless of whether or not they achieve regime change. Most importantly, a government headed by Guaidó will be perceived both by Venezuelans and international observers as “made in U.S.A.” Further, the opposition’s association with foreign powers has enabled the Maduro leadership to keep discontented members of the Chavista movement in their ranks.

Furthermore, Venezuelans will perceive any sign of economic recovery under a Guaidó government as made possible by aid, if not handouts, from Washington, designed to discredit Maduro’s socialist government, though such assistance will undoubtedly be used to further U.S. economic and political interests. In fact, U.S. National Security Advisor John Bolton has indicated that he is already calling on oil companies to opt for investments in Venezuela once Maduro is overthrown. As he told Fox News, “we’re in conversation with major American companies now… It will make a big difference to the United States economically if we could have American oil companies really invest in and produce the oil capabilities in Venezuela.”

Either explicitly or implicitly, Washington is dictating strategy, or at least providing input into its formulation. One of the challenges the opposition faces is the need to demonstrate to rank-and-file Venezuelans that the current offensive against Maduro will be different from the disastrous attempts of 2014 and 2017, when anti-government leaders assured protesters that the president would be toppled in a matter of days. The opposition leadership claims that this time is different for two reasons. First, the regional Right turn has deepened, and the opposition is more able than ever to rely on decisive support from Washington and other governments, regardless of how democratic they are—see the neofascist credentials of Brazil’s Jair Bolsonaro.

Second, the opposition is counting on the backing of military officers, particularly lower-ranking ones who have allegedly lost patience with Maduro. In addition to some defections, junior officers attempted to stage a military coup just two days before mass opposition protests on January 23 when Guaidó declared himself president. Previously, the Venezuelan opposition expressed a degree of contempt for military officers for their unwillingness to defy the Chavista government. The opposition’s new perspective dates back to Trump’s three meetings with military rebels and his statement, made alongside President Iván Duque of Colombia in September of last year, that the Maduro government “could be toppled very quickly by the military if the military decides to do that.” The U.S. effort to encourage the military to step in was again made evident on Wednesday when John Bolton tweeted that U.S. sanctions against senior officers for alleged illegal actions could be lifted “for any Venezuelan senior military officer that stands for democracy and recognizes the constitutional government of President Juan Guaidó.” Recently, Guaidó made a similar offer to military officers, implying continuity and closeness between Washington and the shadow government.

Also noteworthy is that Guaidó and other VP leaders are closer to Washington than the rest of the opposition. The Wall Street Journal reported that Guaidó consulted Mike Pence the night before his self-proclamation as president on January 23. According to ex-presidential candidate Henrique Capriles Radonski the majority of the opposition parties were not aware of Guaidó’s intentions and in fact did not support the idea.

To make matters worse, the VP-led opposition is openly working hand-in-glove with Washington. Last week Guaidó announced that he would attempt to transport humanitarian aid the United States has deposited on the Colombian and Brazilian borders into Venezuela. He called on the Venezuelan military to disobey orders from the Maduro government by facilitating the passage of goods, while Maduro ordered it blocked. While playing political benefactor, Washington was clearly manipulating the optics of the situation to discredit Maduro and rally more international support for Guaído. In an apparent rebuke to Washington and Guaidó, UN spokesperson Stéphane Dujarric on Wednesday insisted that the humanitarian aid be “depoliticized.”

Opposition leaders and the Trump government are also working together to isolate Venezuela economically throughout the world. Julio Borges, a leading member of the opposition, has campaigned to convince international financial institutions to shun Venezuelan transactions and has urged Great Britain to refuse to repatriate Venezuelan gold stored in London. President Maduro has responded by calling on the Attorney General to open judicial proceedings against Borges on grounds of treason. Along similar lines, U.S. Secretary of the Treasury Steven Mnuchin and Commerce Secretary Wilbur Ross are currently attempting to convince international business interests to deny the Venezuelan government access to national assets in their possession.

The Trump administration’s blatant and undisguised interventionism may in fact backfire and help Maduro counter his sagging poll numbers, which last October the polling firm Datanálisis reported was 23%. Maduro recently lashed out on Twitter at the close nexus between Washington and the opposition, saying “Aren't you embarrassed at yourselves, ashamed at the way every day by Twitter Mike Pence, John Bolton, Mike Pompeo tell you what you should do.”

Anti-imperialism is, of course, a major cornerstone of the Chavista movement, born from resentment of U.S. interventionism and heavy-handedness that had for decades controlled many of Venezuela’s resources and dictated its economic policies. The maneuvers of the Trump administration and its allies only double down on this narrative, and are counterproductive at best when it comes to solving the crisis. Their actions also risk fanning the flames of anti-Americanism throughout the continent. It wouldn’t be the first time: In 1958, then-vice president Nixon was attacked by a riotous crowd in Caracas, and a decade later Nelson Rockefeller’s fact-finding tour arranged by then-President Nixon faced off with angry disruptive protests. Both incidents were responses to Washington's self-serving support for regimes that came to power through undemocratic means, in some cases with U.S. involvement.

In its strategy towards Venezuela, Washington is invoking not only its Cold War policy but the Monroe Doctrine and its view of Latin America as the U.S.’ “backyard,”—a claim that is especially anathema throughout the region. Indeed, Vice President Pence said to Fox News, answering a question about why Trump is withdrawing troops from Syria and Afghanistan while intervening in Venezuela. “President Trump has always had a very different view of our hemisphere,” he said. “He’s long understood that the United States has a special responsibility to support and nurture democracy and freedom in this hemisphere and that’s a longstanding tradition.”

Meanwhile, President Trump appointed neocon Elliott Abrams as special envoy to Venezuela. As a longtime U.S. diplomat, Abrams has in many ways personified the application of the Monroe Doctrine with his blatant disregard for human rights violations and the principle of non-intervention in Guatemala, Nicaragua, and El Salvador in the 1980s and his alleged involvement in the 2002 coup against Hugo Chávez.

Finally, Trump’s decision regarding CITGO, a U.S.-based company owned by Venezuela’s state oil company, speaks to a dangerous precedent. On Wednesday he declared that jurisdiction over CITGO would be turned over to the shadow government, and appealed to other countries to follow similar steps. While condemning anti-democratic actions and fraudulent elections in Venezuela, these sanctions ignore the rule of law. The Maduro government was never given the opportunity to defend itself and legal procedures were not followed.

It is always a dubious exercise to guess at President Trump’s intentions. His actions in Venezuela could be designed to divert attention from the multiple probes into his own unethical behavior, or they may be a way to draw attention away from the utter fiasco of U.S. interventions in the Middle East, from Libya to Afghanistan, Iraq, and Syria. Trump may also view his Venezuela policy as a quick fix to Make America Great Again. Along similar lines, Trump evidently sees the downfall of the Maduro government as the ultimate proof that socialism doesn’t work. He indicated as much in his State of the Union address on Tuesday when he used the topic of Venezuela as a springboard for declaring: “We are born free, and we will stay free… America will never be a socialist country.”

Yet regardless of short-term results of U.S. support for Guaidó, the final outcome will be negative. There are a number of reasons why: first, it bolsters the position of the most radical elements of the opposition led by the VP party, thus contributing to the fragmentation of the anti-Chavista movement. Second, it attaches a “made in U.S.A.” label to those positioned to govern should Maduro fall. The stigma would undoubtedly scuttle their chances of maintaining longstanding majority support and in doing so would undermine their authority and ability to govern. Third, the appeal to the military to save Venezuela has terrifying implications for a continent with a long history of military rule. And finally, the seizure of Venezuelan assets, which have then been turned over to a political ally, violates sacred norms of property rights, and in the process erodes confidence in the system of private property. These four considerations are an indication of the multiple adverse impacts that the Trump administration’s rash approach to the Maduro government will have on the United States, Venezuela, and the rest of the region.

Steve Ellner is a retired professor from Venezuela’s University of the East, a long-time contributor to NACLA: Report on the Americas, and currently associate managing editor of “Latin American Perspectives.” Among his over a dozen books on Latin America is his edited The Pink Tide Experiences: Breakthroughs and Shortcomings in Twenty-First Century Latin America (Rowman & Littlefield, 2019).