“What better function for art at this time than as a voice for the voiceless”: The Work of Chicano Artist Malaquías Montoya

A profile of Malaquías Montoya, the Chicano artist whose work focuses on amplifying the voices of Chicanx farmworkers and Mexican immigrants. 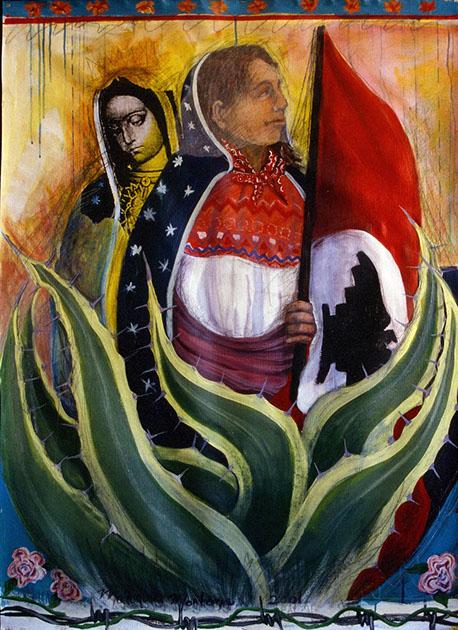 The art of Malaquías Montoya exposes its viewers to uncomfortable truths. The woman on the bus on her way home after working a long day; the mother bent over in the fields picking cotton, and then rushing home to her children, preparing their meals and getting them ready for school the next day; the farmworker who had never imagined she’d be carrying the Huelga (strike) flag, striking for better wages, working conditions, and dignity.

Montoya’s art is explicitly political. “As a Chicano artist I feel a responsibility that all my art should be a reflection of my political beliefs—an art of protest,” he wrote in his short bio for a 2003 exhibit entitled One Struggle, Two Communities: Late 20th Century Political Posters of Havana, Cuba and the San Francisco Bay.

Montoya’s work has existed at the intersection of art and politics for close to 50 years. Montoya sees his artistic identity as giving voice to a community that society had deemed silent and voiceless. “Realizing later that it was not by choice that we remained mute but by a conscious effort on the part of those in power, I realized that my art could only be that of protest—a protest against what I felt to be a death sentence,” he said to me in an interview in October 2018. 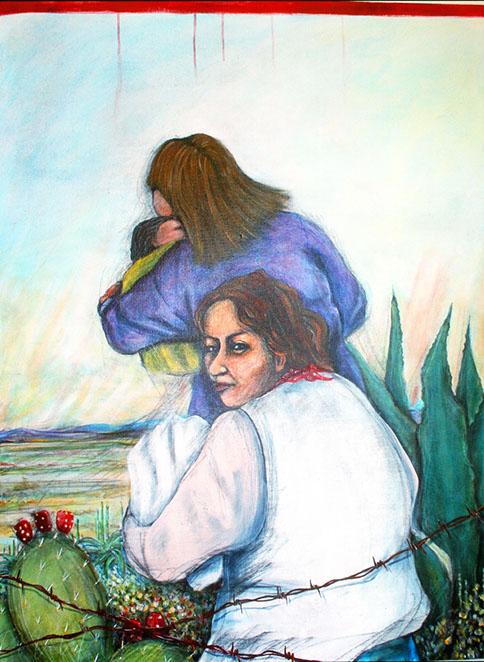 Montoya’s political paintings, screen prints, and murals have always been aimed at serving the underrepresented, the neglected, the subaltern, the oppressed, and the abused. Over the years, his work has helped social justice organizations such as the La Raza Centro Legal, United Farm Workers, the Olga Talamante Defense Committee, the Third World Women’s Alliance, and other organizations working on criminal justice issues, political prisoner struggles, and anti-death penalty advocacy. Through his art, Montoya highlights these organizations’ struggles for immigrant rights, worker’s rights, women’s rights, the fight against racism, war, and U.S. imperialism.

“Montoya is one of the movement soldiers who’s kept the flame of social justice art alive ,” said Lincoln Cushing to me in an interview. “He consistently ignored the path of art world fame in favor of community impact and principled politics.” Cushing is a social justice artist and art historian.

Montoya’s work doesn’t just proclaim inclusion and recognition, it demands as much from the viewer. Viewing a Montoya work is not a passive experience. The work demands recognition of and solidarity with the pain and suffering of the poor, the oppressed, and the invisible.

“The tradition of Mexico’s great socially conscious artists, including José Guadalupe Posada at the turn of the 20th century, the Taller de Gráfica Popular beginning in the 1930s, and the graphic artists of the 1968 Mexican student movement,” said Ed McCaughan, Professor Emeritus of Sociology at San Francisco State University and author of Art and Social Movements: Cultural Politics in Mexico and Aztlan.

Montoya’s powerful and poignant exhibit of original paintings and prints entitled Women I Have Encountered/Mujeres que he Encontrado, is currently on exhibition at the Vacaville Museum in northern California. The exhibit includes 30 chosen works—featuring a wide variety of media, including oil and acrylic paintings, collage, charcoal drawings, and silkscreens.

In an interview at the Vacaville Museum in early October 2018, Montoya told me that his work grows from his encounters in everyday life in the U.S.-Mexico borderlands. He emphasized the suffering caused by U.S. policies, pointing to NAFTA and U.S. border militarization. The work also takes inspiration from his mother, Lucia Saíz Mointoya, who he says suffered physical and emotional abuse from his father, yet still kept the family together. 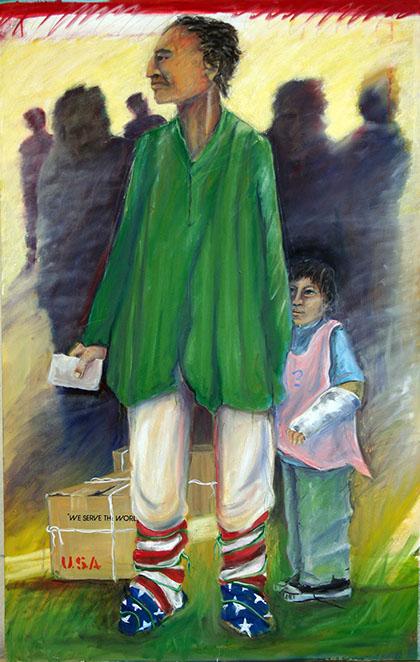 Montoya grew up working in the fields of the Central Valley in California, alongside his mother and siblings. “Being children of farmworkers, we were allowed to stay out of school until the harvest was in. You’d pick the grapes, turn them into raisins out in the sun, then you’d roll them up and they’d go to the packing house, and they’d go into the Sun Maid raisin box.”

When the crops were in, he was sent to school. “In elementary school I was placed in a class that was at that time, or a few years later, labeled an “MR” class, what they called a ‘Mentally Retarded’ class, that became also a ‘Slow Learners’ Class,” Montoya told me. “Instead of helping us get ahead, the teacher would come in with a box full of paper, construction paper, pencils, crayons, chalk, whatever, and that’s what we would do, pretty much all day long.” It was there that Montoya first realized he could draw. This created the groundwork for his life-long journey as an artist at the forefront of the struggle for social justice.

After serving in the Marines, and a brief stint at Reedley Community College, Montoya moved to San Jose where he got a job as a printer at an advertising company. This is where he learned how to silk screen, even though he only had experience in ink printing, an entirely different medium. He explained that the supervisor had given him the job for an initial probationary period. “He said, ‘Well, you know what, you have a really nice smile, you’re a real friendly guy. If you work for me for a month, for free—and remember, during that month, you’re going to be learning a lot—if you do well, I’ll hire you, for $1.25 an hour,’” Montoya explained. “So I worked for free for a month, and I would go back at night and try everything. I would draw; I just fell in love with that place. So I worked for him for almost seven years. At the end of six months he gave me an extra paycheck, for the month I had worked for free.”

In his early drawing in the later 1960’s, he was drawn to the farmworkers’ struggle. “When I started drawing, the first drawings I did were always about people that I knew, which were farmworkers. The early drawings I did, the early silk screens that I did, were about farmworkers. I was excited about what César Chávez was doing, representing us, and I was one of them, you know, and I all of a sudden felt good about what he was saying,” Montoya said.

“I remember sometimes growing up I would feel ashamed of my mom or my dad if they came to pick us up at school, because they never looked like all the other mothers and fathers; they were always dirty because they had been out in the fields, drove in to pick us up at 3:00 so we could go to work,” he continued. “So I remember when I heard Chávez speak, when I saw him on television, I remember thinking that my mom and dad had actually contributed to the wealth of this country and I shouldn’t feel embarrassed by them or feel bad for them.”

Montoya began going to meetings at the Community Service Organization (CSO), a center in San Jose where Chávez used to speak, after starting to spend time with a group called Los Hermanos.’ “They weren’t really talking politics but they were a group of guys who were hanging out together, from the same backgrounds, and they were the ones who started encouraging us to go to meetings… The inspiration that I would get from there were just invaluable.”

“His involvement with the Chicano movement imbued his art with a vibrant color pallet not found in the graphics of many of his counterparts south of the border,” said McCaughan. “Montoya developed as a silk screen master and mentored many other Chicano movement artists.”

Although he never joined any of the political organizations around the Fruitvale district in Oakland where he lived, Montoya didn’t discriminate when it came to accepting projects. “As long as there wasn’t any conflict, I would do a poster for whoever asked me. Whoever asked me to do a poster, as long as we were going in the same general direction, I would do it. Might be different ideas, different approaches, different directions, [but] as long as we agreed, the outcome was going to be the same.” 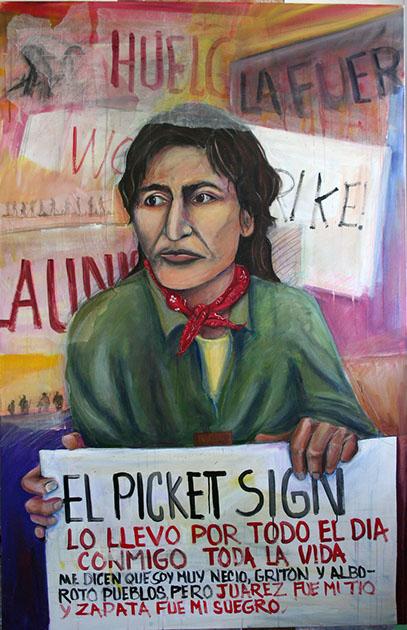 Over the decades, Montoya has continued to devote his art to political struggles. His most recent work has focused on women’s rights, the death penalty and immigration issues.

A few years back, the Smithsonian Institution acquired three of Montoya’s works: “Undocumented,” 1980; “George Jackson Lives,” 1976; and “Vietnam/Aztlan,” 1973. They have acquired others through donations by various collectors.

In 2012, Montoya, who today is 81 years old and lives with his wife Lezlie Salkowitz-Montoya in Solano County, in Northern California, painted a large mural at the UC Davis Student Community Center. Earlier this year in nearby Vacaville, he designed and helped complete a Markham Elementary mural dedicated to the late Anne Starr, a beloved teacher who once worked at the school.

Montoya believes that technological advancement and social media hasn’t changed the role of the artist in the community. “I see their role as the same as ever; the artist is to give voice to the issues that are given to us in a confused manner, so that people can understand the role that they must play,” Montoya said. “I think the role of the cultural worker is to define those things we receive from those that are in power, and give it back to the community, presented it in a more clear way.”

Montoya has been teaching in the Department of Art, is a Full Professor in the Chicana/o Studies Program, and professor emeritus, at the University of California, Davis. His work can be seen on his website @ www.malaquiasmontoya.com.

Bill Berkowitz is an Oakland, California-based freelance writer covering conservative movements. In 2005, he received a Special Journalism Award from the Before Columbus Foundation. His Conservative Watch column documents the strategies, players, institutions, victories and defeats of the American Right. He can be reached via e-mail at: wkbbronx@aol.com

Many thanks to veteran journalist and activist Bob Barber for recording and transcribing our interview with Montoya.