The conviction of Joaquín “El Chapo” Guzmán Loera exemplifies the sensationalism of the U.S.-backed drug war, and will not change the ineffective strategies that fuel it. 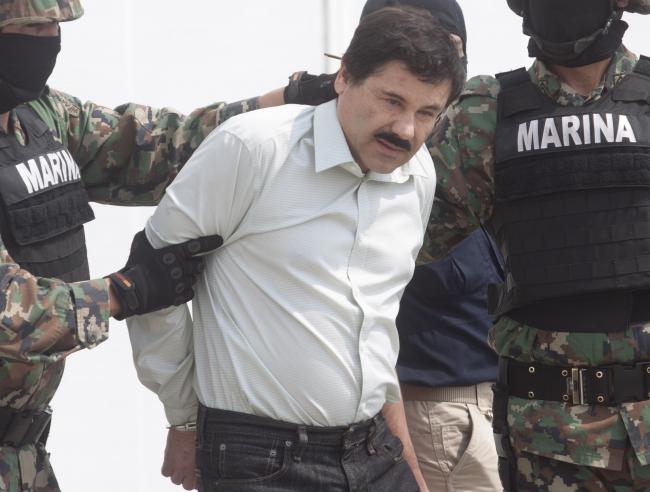 Joaquín “El Chapo” Guzmán Loera, a man once considered the most wanted narco in the Americas, was found guilty February 12 on all counts, which included charges of running a continuing criminal enterprise, conspiracy to traffic drugs, and conspiracy to commit murder. If his conviction holds, he will spend the rest of his life in prison. The conviction followed a highly publicized three-month trial in New York City that cost millions of dollars, with heavily armed law enforcement required to protect the jury. There are still questions surrounding his final sentencing, which is currently scheduled for June 25. Meanwhile, El Chapo’s lawyers are seeking a new trial, citing jury misconduct.

Some commentators and several media outlets have called this spectacle the “trial of the century” since it revealed the inner workings of the Sinaloa Cartel that El Chapo led for two decades, and the alleged operations of a network of Mexican drug traffickers, entrepreneurs, and corrupt Mexican politicians at the highest levels. High-level narcos who worked closely with or knew the operations of Guzmán Loera, testifying as protected witnesses in exchange for reduced sentences, as well as the testimony of convicted criminals, exposed the most obscure elements of the Sinaloa Cartel’s innerworkings and the involvement of Mexican authorities and their allies.

Indeed, the conviction sends a message to cartel leaders in Mexico about impunity: if El Chapo can be convicted, then so can others. Yet this line of thinking serves only to justify the continuation of the U.S.-led “kingpin strategy” in Mexico and other parts of the Americas, which focuses on taking down individual capos (drug cartel leaders), rather than the power structures that perpetuate violence in our hemisphere. This strategy, part of the U.S.-funded War on Drugs, has left lower-level cartel leaders vying for power, thus sparking turf wars throughout Mexico and increasing suffering and violence in the country. In the 12 years since ex-president Felipe Calderón proclaimed the beginning of Mexico’s War on Drugs, over 200,000 people have died and 35,000 have disappeared.

Given this reality, the judicial process against El Chapo, covered extensively in the United States but not in Mexico, is no more than a spectacle, to use the term theorized by Guy Debord. Not to mention that his story has become profitable: it’s no coincidence that Narcos: Mexico was released on Netflix shortly before the trial began. This latest episode of the “El Chapo Show” had a stellar cast that included judges, law enforcement agents, lawyers, and other major drug lords starring as protected witnesses. The main characters were Mexican entrepreneurs and politicians, including former presidents who allegedly received millions of dollars in bribes from El Chapo and his clan.

The spectacle obfuscates history and context, instead focusing on the charismatic figure of El Chapo rather than the power structures that perpetuate violence in Mexico or the role of the United States. Such a retelling appears more of an episodic melodrama than an honest account of the violence committed not only by El Chapo and his henchmen, but by government authorities on both sides of the border that colluded with him. It also obscures the discussion of militarized responses that have wrought suffering and death upon hundreds of thousands of Mexicans, as well as the negative effects of drug prohibition and how neoliberal economic policies have excluded many young Mexicans from formal employment.

Within this “society of spectacle,” the El Chapo trial is the product of mass media coverage that sells stories about cartel wars, warring narcos, love affairs, and corruption scandals. Simplistic commentary and partial analyses abound in a media landscape that portrays the lives of Mexican narcos and the corrupt political class, as well as cartel operations. In consuming such representations, we become spectators to the worst of Mexican culture.

It is also worth noting that this portrayal features no white and/or American villains. As in any other TV series, Hollywood film, or online streaming content, we are only exposed to “good” and “evil.” The bad guys are of course the narcos, who bribe dishonest (read: Mexican) law enforcement agents and politicians. The U.S., for its part, represents the rule of law in the form of mostly white U.S. judges and white U.S. policemen working within the U.S. justice system. This story leaves out the deep complicity of the United States—both through its massive consumption of illicit drugs and the neoliberal policies it has proffered at the expense of many working-class Mexicans. Nor does it mention corruption in the United States or the nefarious effects of current U.S. drug policy and U.S.-led anti-narcotics cooperation in the country.

The narrative of the inner workings of the Sinaloa Cartel and the beginnings of the so-called cartel wars portrays a quasi “failed state,” under the rule of narcos who are capable of dominating law enforcement agencies, state institutions, government authorities, and politicians at the highest levels. This identification justifies a much more aggressive and militarized strategy against these super powerful “bad hombres,” who happen to be brown and Mexican. According to this account, these narcos are also responsible for causing a crisis on the U.S. side by killing U.S. drug consumers. U.S. citizens, on the other hand, are the “good guys” of this show—acting either as judges or victims—with the power to reveal to the world the truth of a “barbarous Mexico” that needs their support to solve its problems.

The media spectacle around El Chapo makes it easy to miss what is really going on and to ignore the basic goals of a strategy that serve economic and geostrategic interests—many of which have their headquarters in the United States. In fact, the information the trial revealed about the operations of the Sinaloa Cartel and drug trafficking business, as well as networks in Mexico, gives U.S. law enforcement agencies strategic information about key Mexican businessmen and politicians, and allows them to exert direct pressure on the new Mexican government. It would not be a surprise, then, that in the very near future the United States would try to pressure Mexico to strengthen its anti-narcotics cooperation based on a higher presence of U.S. law enforcement agencies in Mexican territory. This anti-narcotics strategy could become further militarized in the current context of criminal paramilitarization, cartel fragmentation, and the multiplication of criminal groups with access to high caliber weapons who extract rents in vast regions of Mexico.

The War on Drugs in particular shows us how a media spectacle under the framework of U.S. hegemony has determined the contemporary history of our hemisphere. Certainly, the United States is a military nation that declares war on almost everything: drugs, terrorism, communism, and poverty—whether they are abstract concepts or actual perceived enemies. The United States justifies military intervention and/or militarization that benefits the U.S. military industrial complex, utilizing a spectacle of war, from Libya to Venezuela.

It made sense for the United States to declare this war, but from a strategic perspective it did not make a lot of sense for Calderón to do so on Mexican soil. Mexico has of course been a loyal ally of the United States for years and has closely cooperated with its more powerful neighbor, following the advice of its agencies to chase down and extradite drug lords. Such has been the case with El Chapo and many others, such as Osiel Cárdenas, the former leader of the Gulf Cartel, and Vicente Zambada Niebla, the son of El Chapo’s partner “El Mayo,” who both signed plea deals with the U.S. government.

After decades of failed anti-narcotics cooperation and operations, the conviction of capos like El Chapo will not do away with the narco problem, drug trafficking, or drug consumption in the United States—where users are now dying at a faster pace thanks to an opioid crisis fueled by pharmaceutical companies. Despite this, the Drug Enforcement Administration (DEA) continues offering the same advice to Mexico, supported by billion-dollar budgets. The agency keeps implementing the same strategies that end with the failure to reduce drug trafficking to the United States. Thus, we can only understand the continued support for policies like Plan Colombia, the Mérida Initiative, the Central American Regional Security Initiative (CARSI), and the Alliance for Prosperity as a strategy that, while unsuccessful in limiting the trafficking of drugs, serves to continue the United States’ exercise of geostrategic control over the region.

Meanwhile, the capture of figures like El Chapo and Pablo Escobar, the protagonist of more than a handful of Netflix series, lends itself to the spectacle of the so-called drug wars in the Americas. Recently, Nemesio Oseguera Cervantes, known as “El Mencho,” another important and dangerous narco who founded the Jalisco Nueva Generación Cartel (CJNG), faced a similar fate. But as occurred after El Chapo’s first arrest during the Mexican drug war, this could very well lead to more violence, as it did in Sinaloa. Mexico will continue bleeding, just as spectators will continue watching Netflix and Telemundo telenovelas and prestige dramas that further the idea that individual narcos are the real enemies of society , while at the same time ignoring the role of state authorities and systems on both sides of the border. We consume this entertainment passively and uncritically, as it deepens support for drug wars across the globe.

Perhaps more important, then, than El Chapo’s conviction, is the recent announcement by President López Obrador that his administration will end the Mexican drug war and instead focus on criminal groups that extract rents, steal oil, commit crimes, and cause chaos. We could only hope that this could end Mexico’s drug war spectacle—though history shows that the United States may be unlikely to let them.

Laura Weiss is Managing Editor of NACLA. She holds a Masters’ degree in Latin American and Caribbean Studies from New York University, where she focused on social movements in Mexico. She has reported on immigration, U.S. security policy in Latin America, and Central American refugees in Mexico. Follow her work at lauraweiss.me and on Twitter @lauralew105.