In the Dominican Republic, Haitian-descendants face profiling and scrutiny deep within the country’s borders. 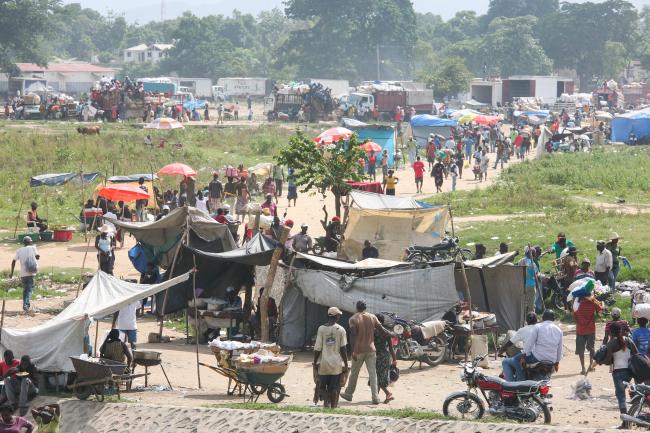 Late last year, Antonio Marte, the union leader of CONATRA, the Dominican Republic’s national transportation workers union, publicly declared that union-contracted buses in the Dominican Republic would be prohibited from transporting Haitian nationals, regardless of their immigration status. Marte later explained via Twitter that his quote had been taken out of context, and that he’d enacted the ban to avoid issues with migration services due to the seizure of 10 of his buses.

Surveillance of Haitian nationals on public transportation is nothing new in the Dominican Republic, a reality made clear by a trip that I took in the summer of 2018 from the border to Santo Domingo. Military outposts, fronted by the Fuerza de Tarea Institucional (Institutional Task Force, FTI) created in 2012, are set up throughout the country are placed along central routes so that the Dominican Army can inspect bus vehicles for irregular migrants, trafficking, and contraband from the border.

I was traveling with my friend James, who is Dominican of Haitian descent. James had been affected by the 2013 Tribunal Court decision that left hundreds of thousands of Dominicans of Haitian descent denationalized or stateless. Due to misinformation and pressure, he had turned in his cedula or Dominican national ID card for a migratory card that lists him as a foreigner. A year after the 2013 decision, the Dominican national court passed a that renationalized those affected by the law who could prove their date of birth fell between 1929 and 2007. The people who could requalify for Dominican citizenship were placed into two categories: those whose births were officially registered (Category A) and those who were born in the country, but lacked documentation (Category B). Those in category B, like James, were required to register for the National Plan for the Regularization of Foreigners (PNRE). This plan promised a pipeline to naturalization and issued migratory regularization cards. As of February 2015, the deadline to register, only 8,755 people had done so despite census records estimating that 53,000 people fell under this category.

As James and I continued on our bus trip to Santo Domingo from the border region of Pedernales, we decided to take a guagua, or public bus, to Barahona, a province in the southwest portion of the Dominican Republic, from where we’d catch a private coach bus to Santo Domingo. Before James boarded the bus, the bus driver asked him to show his documents, so he presented his migratory regularization⁠card that listed his nationality as Haitian. After showing his card to the driver, he boarded the bus.

Bus drivers of public buses are required to ask passengers for their passports and/or documents showing that they are legally able to travel within the Dominican Republic, demonstrating how non-state actors are now taking part in extending the borders of the Dominican Republic onto the bodies of Haitian and Haitian descendants, albeit hesitantly. But whether or not they actually ask for these documents seems to depend on their own preconceptions of who looks “foreign.” The bus driver did not ask me for my documentation, even though I am brown-skinned, with mixed Black ancestry. When I asked the bus driver why, he shrugged and said, “you look like one of us.” On the other hand, patrol officers referred to James as “negro.”

Race in the Dominican Republic is deeply entrenched in colonial discourses of progress. This was readily apparent during the dictatorship of President Rafael Trujillo, who was notorious for his obsession with whitening the history and culture of the country. Although the majority of Dominicans can claim African ancestry, the national narrative encourages them to identify as indio, a racial category that refers to the island’s Indigenous inhabitants, while negro is reserved for Haitians. In presenting itself as a mixed-race nation, the Dominican Republic has distanced itself from its Haitian neighbors. Haitian blackness is thus seen as distinct from Dominican blackness. This distinction has had violent results: in 1937, the Dominican army slaughtered thousands of residents along the border in Dajabón who were suspected of being Haitian nationals. Anti-Haitian and anti-black sentiment continue to define the national landscape of the Dominican Republic and molds the experiences of Haitians and black Dominicans.

Upon our departure, the guagua slowly rolled though the main street of Pedernales. Some 10 minutes later, we approached the main army station in Pedernales. Such checkpoints are scattered throughout the entire country. At the stop, all of the passengers were asked to get off of the bus. Only James and another man with a Haitian passport had to step aside to have their documents verified.

I stood in the shade under a tree as James quickly entered and exited the checkpoint. According to him, he was asked to pay a bribe of 100 pesos to get through the checkpoint, but he used his fluent Spanish and knowledge of the border to decline to bribe. This wasn’t, however, the first time he had been forced to negotiate a bribe when riding the bus to the capital.

We got back on the bus. But no more than 10 minutes later, we reached a second checkpoint located along the main route to the capital. Looking straight at James and another man who had a Haitian birth certificate and migratory ID card, an officer demanded their “documentos.” The two quickly obliged, swiftly handing him the papers through the window. As the guards inspected the documents, the other passengers—all various shades of brown—sat patiently averting their eyes, sighing deeply, and checking their phones. For many, this extension of the border via security apparatuses and surveillance is normalized—an inconvenient yet essential part of their trip to the capital.

Twenty minutes later, we approached yet a third checkpoint. A man with deep brown skin peeked his head into the guaguaand said “papye,” the Haitian Kreyòl word for papers. James and the other man took out their documents as the rest of us, except the children, were asked to step outside the van so that the guards could search for contraband, from drugs to everyday items like rice and beans. James waited as one guard searched him, while another guard carefully checked the other man’s migration card and Haitian birth certificate. After a delayed inspection, the guards asked the other man to go into the Army post on the side of the road. Although the guards at the previous two checkpoints took no issue with the man’s documents, this third checkpoint proved to be his final stop. The man went into the office and remained behind as the buscontinued on its trip. During the next three checkpoints, James was, as expected, the only person to be asked for his documents. Only at the last stop before Barahona did a dark-skinned black man quickly check the bus and let us through without asking anyone for their documents.

We finally reached Barahona⁠ four hours and seven points of inspection later.⁠ The majority of the checkpoints took place within the southwest regions or the borderlands. The proximity of these localities to the geopolitical border makes them crucial to extending the border beyond its physical demarcation. While transit across the border is possible for many Haitians in the Dominican Republic, it becomes less and less likely as they get closer to the capital. In other words, the closer you are to the interior from the border, the less mobile you become.

Antonio Marte’s ban points towards an issue that is a more recent phenomenon: expanded borders. These borders replace the geopolitical coordinates of sovereign borders and circumscribe them onto the bodies of individuals thought to be foreign, thus creating arbitrary zones where their legal rights are suspended in the name of security and sovereignty. In 2006, the Cuerpo Especializado en Seguridad Fronteriza Terrestre (Specialized Land Border Security Body, CESFRONT) was created as a part of the Dominican Republic’s effort to securitize its border and protect it against foreign threats. In the case of Haiti and the Dominican Republic, the border between the two nation-states was in constant flux until it was solidified through the Border Treaty of 1929. By establishing a border, officials sought to clearly demarcate who was Haitian and who was Dominican. Despite these efforts, the border has never been successful in separating the two countries.

But as border zones are created, the border line grows ever wider, and so does the surveillance and policing of people within those zones. And not only are these borders marked through checkpoints and patrols that span the country, but so too are black bodies, deemed as foreign and other by the Dominican state. Because of his “foreignness,” James is constantly subjected to border checks that demand proof that his physical and ideological presence within the Dominican Republic is warranted.

The ban of Haitian nationals from Marte’s buses, regardless of their documented ability to travel, demonstrates the Dominican Republic’s long standing anti-Haitianism. Haitians and even those perceived to be Haitian have been denied basic human rights such as access to education, the right to nationality, and the right to move freely in a territory. Furthermore, it represents the ongoing tension that many Dominicans are grappling with in terms of the ever-expanding border. Not only do these mobile borders effect Haitian and Haitian descendent people, but they also effect Dominicans from all walks of life who must contend with this “new normal.”

Soon after he called for the ban, Marte retracted his statement, apologizing to the Haitian community and shifting his focus to the abuses of authorities. Despite the retraction, the ban in the Dominican Republic is part of a broader problem, namely that of nation states increasingly attempting to control their borders through the creation of extended, non-physical, and mobile borders. An issue by no means foreign to those familiar with U.S. Immigration policy, where federal regulations allow Customs and Border Patrol to operate within a 100 mile of the border zone. According to the ACLU, this affects nearly two-thirds of the U.S. population and creates a questionable grey area for constitutional rights.

As for whether or not he will attempt to renationalize, he said: “It doesn’t matter if I am Dominican or not. When I take the bus, the guardswill still yell, "¡Morenos abajos!" (black people, get out!).

Elena Herminia Guzman is an Afro-Indigenous Boricua filmmaker, educator, and anthropologist from New York City. Her work broadly looks at issues of representation in the African/Black Diaspora. Her artistic work and research also extend to Haiti and the Dominican Republic where she conducted fieldwork and has a series of visual projects with a focus on narrative performance such as Carnival and the Lenten festivals of Rara. She is a co-founder of Ethnocine Collective, a feminist filmmaking collective that is committed to a feminist and decolonial lens that pushes the boundaries of non-fiction film.