The Consequences of Mr. Macri

Mauricio Macri came into office promising to stem corruption and bring down inflation. But his austerity policies have left Argentina's economy in shambles. 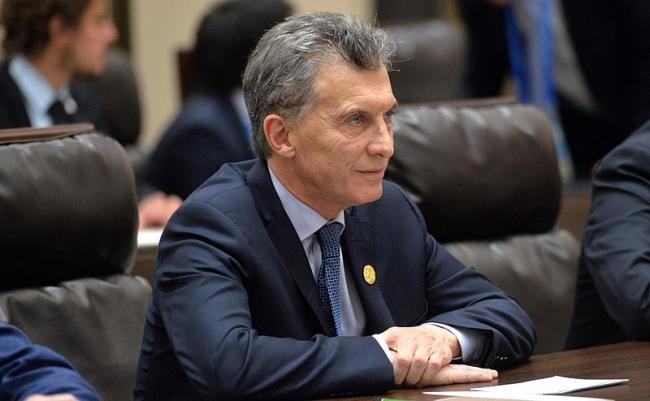 Mauricio Macri, the businessman-turned-politician about to complete his first term as Argentina’s president, is up for reelection later this year. But the economy is in shambles.

The austerity policies his administration has implemented have given the lie to his coalition Cambiemos’s 2015 campaign promise to reach “poverty zero.” The administration hasn’t even managed to bring down inflation, something Macri repeatedly said would be “super easy” to achieve.

Instead, Argentina has become a sort of vassal of the International Monetary Fund (IMF). After reviewing the country’s economic performance, the organization recently allowed the government to access an additional $10.87 billion, and Christine Lagarde, the IMF’s chairwoman, said last week that it would be “foolish” for any candidate (or their supporters) to turn their back on Macri’s plans. Largarde also said that the IMF “strongly support[s] the authorities’ efforts to mitigate the social impact” of the IMF’s policies, including the recently announced increases in social spending, which Macri desperately needs to placate the electorate on the eve of his reelection campaign. But while the IMF’s support is good news for the government, it didn’t stop Argentina’s peso from dropping to a record low against the US dollar last week ($44.90). Last year the currency was among the worst-performing on Earth, something that could certainly be repeated in 2019.

Along with a weak currency, production, consumption, employment, and wages have all fallen. This has neither halted inflation (consumer price inflation last year was 47.6 percent, the highest in twenty-seven years) nor made Macri reconsider his economic program. It’s no mystery why: Cambiemos believes austerity is not just a remedy to domestic issues but an essential means of integrating the country into the machinery of global capitalism. Reestablishing ties with the IMF allows Macri to both reconnect with ruling economic hubs and introduce a powerful external actor that can help discipline political and popular demands in the country (by loading the country up with debt) and push through his neoliberal program.

But by doing so, a government that touted itself as “the best team in the last fifty years” has placed the country on the verge of economic disaster, privileging the interests of the most internationalized and concentrated sectors of the economy at the expense of the majority of the country. The financial sector, agribusiness, energy companies, and mining corporations have received the lion’s share of Macri’s upward redistribution. As Grupo Los Grobo CEO Gustavo Grobocopatel put it in a recent interview, the company is paying “much more in taxes but they do it very happily.” A 400 percent devaluation of the currency since 2015 has something to do with his cheerfulness, as does the dubiousness of his claim about a higher tax bill.

With few exceptions, Mr Macri has cut taxes for big businesses—waiting, he insisted, for “torrential inversions” that never arrived. Since then, the government has only managed to depress salaries and raise fuel and household costs. Electricity prices jumped between 1,053 percent and 2,388 percent from October 2015 to October 2018; gas for households increased between 462 percent and 1,353 percent; and water prices went up by 832 percent.

In just three years, Macri’s monetary policies prompted Argentina to sign a $56.3 billion financing deal with the IMF, the most extensive rescue package in the organization’s history. Argentina is now the most indebted country in Latin America (with a debt that rose to 77.4 percent of GDP in 2018).

It hasn’t taken long for the consequences of these policies to bleed like an open wound. Poverty has grown 6.3 percentage points (or 2.7 million people) in the last year alone, reaching 32 percent of the population. Unemployment is close to double digits (and higher for women and young people — 21.5 percent for women between fourteen and twenty-nine years old and 17.3 percent for men in the same cohort), while industry has been destroying employment with no end in sight.

Last month Volkswagen Argentina announced a rotating furlough plan for three hundred workers at its Pacheco plant, following similar moves at other terminals last year. Peugeot dismissed one thousand operators at its El Palomar plant, and Honda did the same with seven hundred workers. Another example is Renault, which halted production at its plant in Córdoba for a week this month (affecting 1,500 employees) and has not yet announced whether it will repeat the measure. FATE, the tire company, is in the same situation, and workers say the company is preparing 450 dismissals. According to official figures, the number of registered industrial workers was 92,800 less than in November 2015. In its “Industry Report,” Adefa, Argentina’s automotive factory association, reported that wholesale sales fell 58.8 percent between February 2018 and 2019. A similarly dire picture can be seen in other economic sectors.

Meanwhile, businesses and the state are working to liquidate past labor victories and protective legislation. For example, a Cambiemos governor in the northwest province of Jujuy okayed child labor in the tobacco industry; and schemes tying wages to productivity have increased in recent years, with sometimes fatal consequences. Port workers, teachers, doctors, nurses, and other state workers are also feeling the heat — as is the scientific community, which is steadily losing funding and human resources.

The catastrophe may not be easy to grasp from Washington or Argentina’s executive mansion, “Casa Rosada,” but it is readily apparent on the ground.

The Legacy of Mr Macri

There is an ongoing debate about how to characterize Mr Macri’s economic experiment, considering both the massive transfer of resources towards the wealthy and his stated aims of “fighting corruption” and restoring “normality.” More recently, Macri’s intimate relations with Donald Trump’s administration and abundant propaganda about combating drug trafficking have blanketed the news (interspersed with tales of illegal espionage). All this—but especially his agenda to bring “normality” into urban territories — is being used to militarize the country in an attempt to repressively manage the mounting social anger.

Again, the scale of Mr Macri’s problems should not be confused with unforeseen or “unwanted” results. The fall in real wages and the regressive redistribution of wealth were always part of his project, a project that faces difficulties due to the loss of legitimacy and the lack of economic growth that could subordinate sectors affected by cuts and austerity.

Without such resources, Macri and Lagarde will try to convince voters that the country is on the path to prosperity, in the absence of any concrete evidence. At the same time, Cambiemos will — not for the first time in Argentine history — use the external debt as a disciplinary tool, exhorting the population to go along with social spending cuts “because there is no alternative” while targeting those resisting as malicious and damaging to the country.

Despite Macri’s heavy hand, social unrest—a constant since 2016—is growing. The feminist “green tide,” human rights organizations, and some sections of the workers’ movements are all quite active, with the latter now calling for a fifth national strike, on April 30. Other more spontaneous eruptions have also emerged, placing additional constraints on the government. Macri has been unable to pass his regressive labor, pension, and electoral reforms.

If something other than a dramatic economic recession can be counted as Macri’s legacy, it is his capacity to reconnect a neoliberal right and traditional center-right politics, both strongly influenced by anti-Peronist sentiment. Macri says it is him “or the past.” But he has nothing to offer other than a dramatic repetition of the recipes that led Argentina to severe crises not so long ago. And that’s far from what the vast majority in the country needs.

This piece was originally published in Jacobin.

Luciana Zorzoli is a research associate at SOAS, University of London and a CONICET postdoctoral fellow at IdIHCS, University of La Plata. Her research interests include industrial relations and economic development of Latin America.